A 56-year-old man who underwent transsphenoidal surgery for craniopharyngioma 26 d ago presented gradual headache and cerebrospinal fluid leakage while vomiting 5 d post-discharge and required readmission to our department of neurosurgery. After admission, head imaging examination showed a hyperdense shadow in the superior sagittal sinus and right transverse sinus, edema at the bilateral parietal lobe, and hemorrhage at the left parietal lobe and right occipital lobe; the venous phase of cerebral angiography revealed CVST. The patient was treated immediately by intravenous thrombolysis, endovascular thrombolysis, and mechanical thrombectomy after the definite diagnosis. However, the neurological status of the patient continued to deteriorate and he died on the fourth day after readmission.

For craniopharyngioma undergoing transsphenoidal surgery, it is vital to take an effective strategy to manage the postoperative complications, such as diabetes insipidus, severe electrolyte imbalance, and cerebrospinal fluid leakage. Additionally, the early differential diagnosis of CVST is essential when it develops clinical symptoms, especially in patients following transsphenoidal surgery with a high risk of CVST. Subsequently, the timely and effective treatment of the CVST is critical for preventing neurological deterioration.

Core tip: Cerebral venous sinus thrombosis (CVST) is a rare condition in patients with craniopharyngioma following transsphenoidal surgery. This case highlights that there may be a significant relationship between systemic hypovolemia, cerebrospinal fluid leakage, gene mutation, and CVST formation. The early differential diagnosis of CVST is essential when it develops clinical symptoms, especially in patients following transsphenoidal surgery with a high risk of CVST. Additionally, the timely and effective treatment of the CVST is critical for preventing neurological deterioration.

Craniopharyngioma is a benign but locally invasive tumor of the sellar/para-sellar region with low histological grade. Transsphenoidal surgery has been a safe and effective procedure for the treatment of craniopharyngiomas, despite minimal iatrogenic injury. Postoperative complications such as cerebrospinal fluid (CSF) leakage, diabetes insipidus (DI), and intracranial infections are not rare. Cerebral venous sinus thrombosis (CVST), which is caused by trauma, dehydration, oral contraceptives, and hematological abnormalities, can effectuate various clinical manifestations, including headache, seizures, and focal neurological deficits. However, to date, cases of CVST following transsphenoidal surgery for craniopharyngioma have not been reported.

A 56-year-old man presented gradual headache and CSF leakage while vomiting 5 d post-discharge and required readmission to the neurosurgery department.

The patient was admitted to a local hospital initially for residential treatment owing to progressive headache and severe bilateral visual impairment 7 mo ago. Imaging examinations revealed a craniopharyngioma. Then, he was treated by the insertion of an Ommaya reservoir and cyst aspiration, which was managed by Cr32PO4 irradiation (Figure 1A and B). Subsequently, the size of the tumor became reduced, and his headache was alleviated. However, his symptoms, including visual acuity and headache, were repeatedly deteriorating 3 mo ago. Brain magnetic resonance imaging showed a diffuse tumor expansion (Figure 1C and D). Then, he underwent transsphenoidal surgery for removing the mass at our department 26 d ago (Figure 1E and F), and the histopathology confirmed adamantinomatous craniopharyngioma (Figure 2). Besides, appropriate treatment strategies were taken to control several postoperative complications. Continuous CSF lumbar drainage led to the cessation of CSF leakage. Severe electrolyte imbalance (sodium, 150-168 mmol/L) and DI (urinary volume/d > 4 L) were controlled by restricting sodium chloride intake and taking oral desmopressin. Three weeks postoperatively, he was discharged since the clinical manifestations and laboratory examination results were not specific. 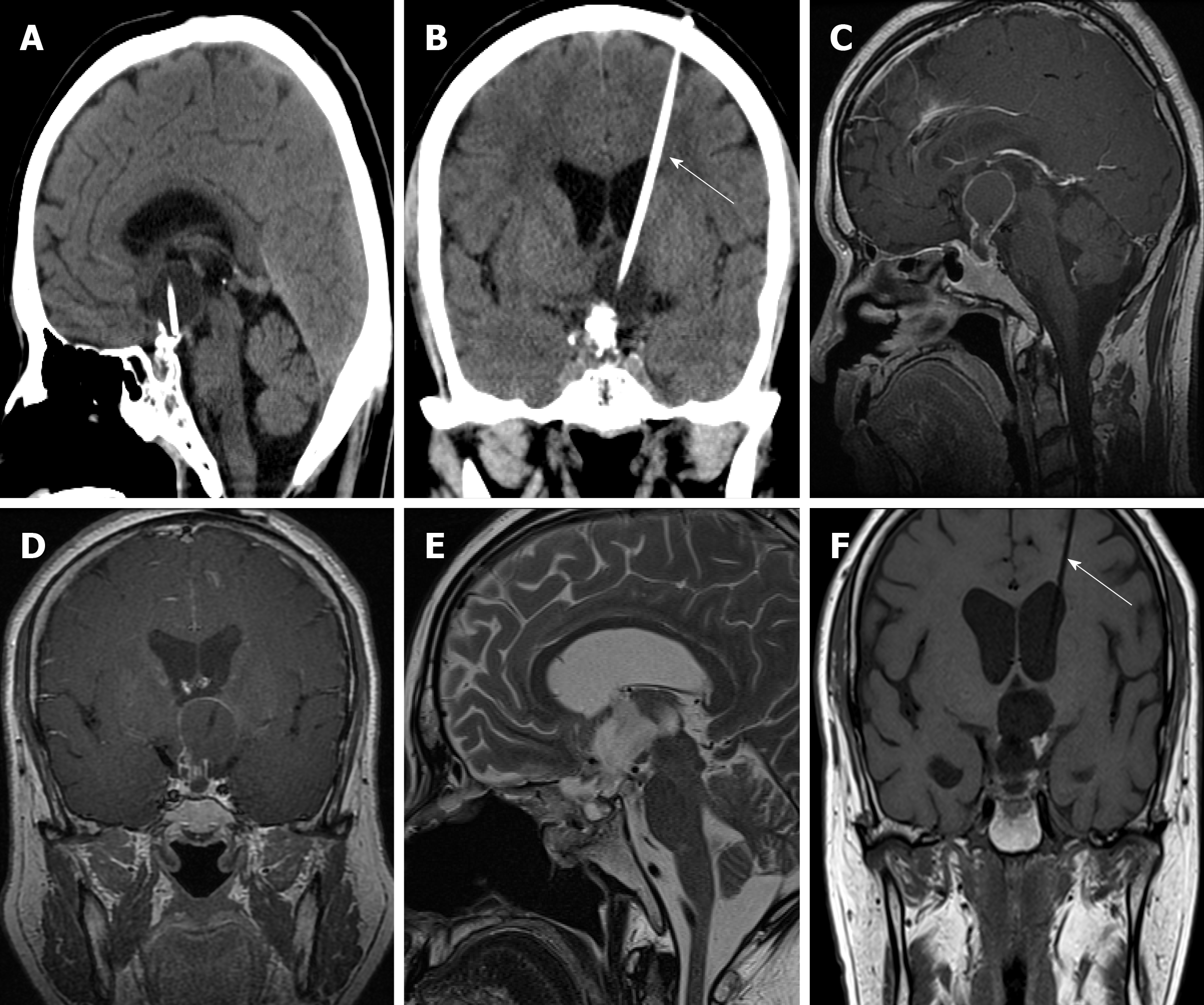 Figure 2 Histopathology examination of the tumor. A and B: Hematoxylin and eosin staining showed adamantinomatous craniopharyngioma (× 100).
History of past illness

He had no medical history of systemic diseases or was not administered any oral medication before the craniopharyngioma was confirmed.

His son was diagnosed with spontaneous CVST in December 2014.

His vital signs were blood pressure 110/60 mmHg, heart rate 110-120 bpm, and core body temperature 37.8 °C. Neurological examination on admission revealed that he was conscious and without other positive signs. There was no change in bilateral visual acuity or visual field compared with baseline after tumor resection.

Head computed tomography (CT) on the first day after readmission showed a hyperdense shadow in the superior sagittal sinus and right transverse sinus (Figure 3A and B); head CT on the second day showed the presence of edema at the bilateral parietal lobe, and hemorrhage at the left parietal lobe and right occipital lobe (Figure 3C and D); cerebral angiography on the second day showed the occlusion of the superior sagittal sinus (Figure 3E and F). 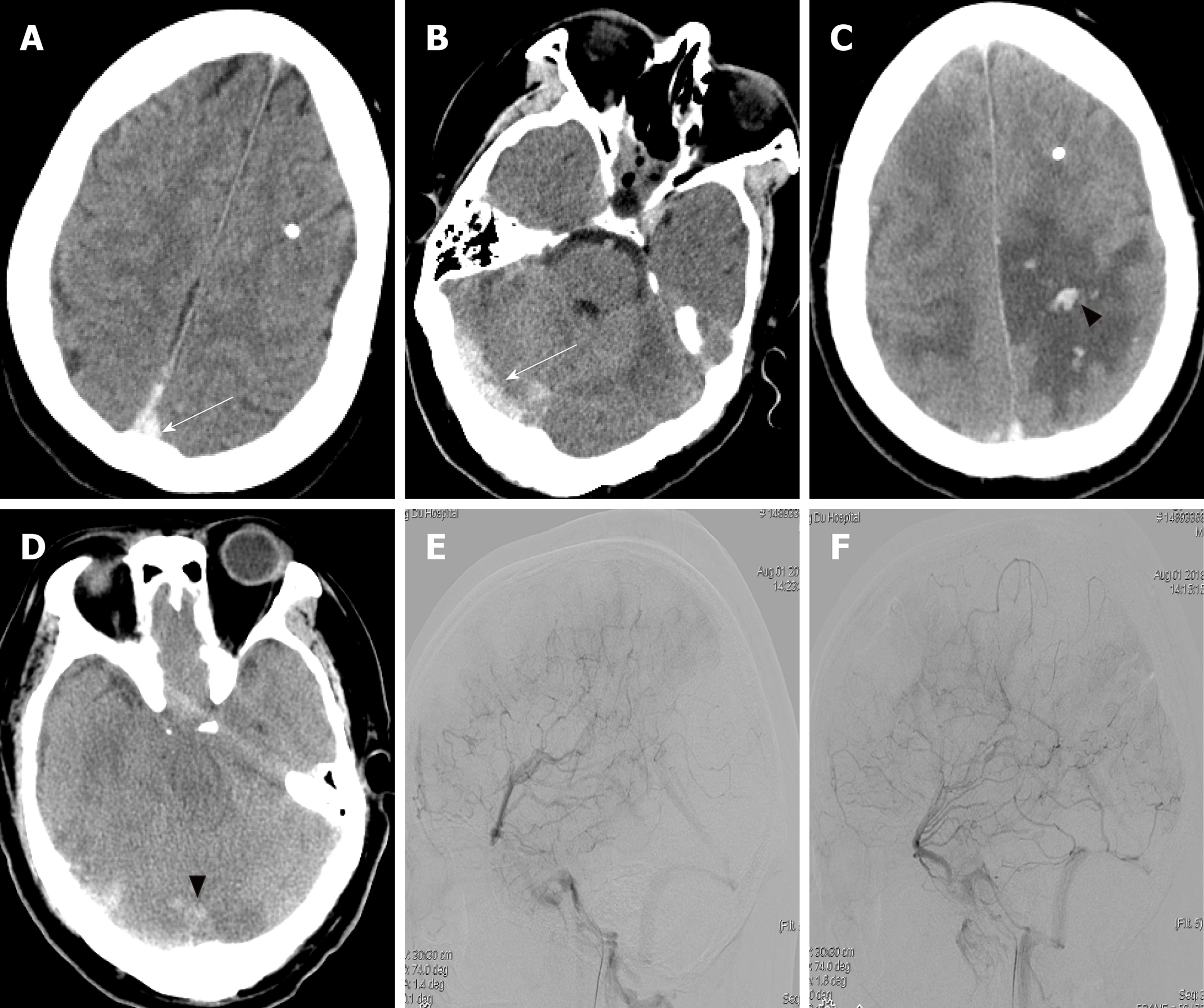 Figure 3 Imaging findings after readmission. A and B: Head computed tomography on the first day after readmission showed a hyperdense shadow in the superior sagittal sinus and right transverse sinus (white arrow); C and D: Head computed tomography on the second day after readmission showed the presence of edema at the bilateral parietal lobe, and hemorrhage at the left parietal lobe and right occipital lobe (black arrowhead); E and F: Lateral view of the venous phase image of the left and right internal carotid artery of cerebral angiography illustrated the occlusion of the superior sagittal sinus.
FINAL DIAGNOSIS

The diagnosis was secondary CVST.

The patient was treated immediately by intravenous thrombolysis [low molecular weight heparin (LMWH)], endovascular thrombolysis [rt-plasminogen activator (rt-PA)], and mechanical thrombectomy after the definite diagnosis, yet his condition continued to worsen. His family members refused the emergency decompressive craniectomy due to hazards and unpredictable outcomes.

The neurological status of the patient continued to deteriorate and he died on the fourth day after readmission.

Among adult craniopharyngioma patients, approximately 40%-93% suffered from DI, and about 80% required pituitary hormone supplementation post-operation[1]. For the patient, hypernatremia and DI were controlled within a reasonable range by taking oral desmopressin and restricting sodium chloride intake during the hospitalization, and he was still administered desmopressin orally to control the urine volume after discharge. When the patient was re-hospitalized for deterioration of the general condition, he had a urine volume of more than 350 mL/h, and 24-h cumulative urine more than 4.5 L, and presented with hypernatremia (168.0 mmol/L) and hypokalemia (3.08 mmol/L). Dehydration and hypernatremia are known risk factors for cerebral sinus thrombosis, which can be explained by inadequate fluid intake and DI[2]. Thus, it can be concluded that the development of CVST may be associated with systemic hypovolemia and hypernatremia due to DI.

Intracranial hypotension, which is defined as CSF pressure ≤ 6 cm H2O and characterized by the appearance of orthostatic headache, was caused by loss of CSF through a dural defect. In the present case, the CSF leakage and headache disappeared 3 wk postoperatively; however, these clinical manifestations reappeared 5 d post-discharge. The lumbar puncture showed that the CSF pressure was less than 6 cm after readmission, and head CT showed a hyperdense shadow in vein sinus, edema at the bilateral parietal lobe, and scattered parenchymal hemorrhagic foci adjacent to the midline, which is one of the typical radiographic findings in patients with CVST. Although magnetic resonance imaging was not performed due to the rapid deterioration of the patient's condition, we have done the cerebral angiography as soon as possible to make a definitive diagnosis for CVST. Many shreds of evidence have demonstrated that intracranial hypotension is a risk factor for CVST, and CVST is found in 2% of the patients with intracranial hypotension[3]. We deduced that the CSF leakage and intracranial hypotension in the patient could be attributed to the initial vein drainage disorder of the sagittal sinus, which could lead to the aggravation of headache, vomiting, then, the dura mater herniating and tearing through the bony defect of the sellar floor, and causing CSF leak.

It is essential to clarify the significant relationship between systemic hypovolemia, CSF leakage, gene mutation, and CVST formation. For the reason that the sagittal sinus has the largest diameter among intracranial vessels, the blood flow velocity in the sagittal sinus is slower than that in other cerebral vessels; it is the pathophysiological basis of thrombus formation. Systemic hypovolemia that contributed to DI and inadequate fluid intake might increase blood viscosity, which further reduces cerebral blood flow velocity and promotes thrombosis. Also, according to the Monro-Kellie principle, when CSF leakage results in a decrease of CSF, it increases the cerebral blood volume for maintaining the stability of intracranial pressure by dilating the diameter of the venous structures. Thus, the cerebral blood flow velocity is decreased in the venous phase, which is inversely proportional to blood vessel diameter. Once CSF leakage occurred, it in turn could promote the formation of CVST. Additionally, the patient's kin was diagnosed with spontaneous CVST, so we speculated that the formation of CVST was related to a specific gene in the patient's family. Several case reports have shown that CVST is associated with prothrombin gene G20210 mutation[4]. Nevertheless, these factors, the patient's condition deteriorated rapidly after hospitalization, and no conditions for gene detection, prevented us from perfecting the genetic inspection.

There are many controversies and discussions about the management strategy for CVST. Several pieces of evidence suggested that anticoagulation therapy, i.e., heparin or low molecular-weight heparin (LMWH) for CVST, is associated with a clinically relevant reduction in poor outcome. There were no major bleeding complications related to anticoagulation treatment with LMWH at therapeutic dosage. Nevertheless, there may be a correlation between anticoagulation ineffectiveness and the delayed initiation of anticoagulation for the present patient. In case of failure to improve or deteriorate despite anticoagulant therapy, direct catheter-directed thrombolysis and mechanical thrombectomy may be considered. The efficacy and safety of endovascular thrombolysis and the mechanical thrombectomy in patients with CVST, aiming to dissolve the venous clot and reopen the occluded sinus, have not been proven yet. In the present patient, we were unable to recanalize the sinus by endovascular treatment due to the total occlusion of the superior sagittal sinus. Decompressive surgery is life-saving and is indicated in a small subset of patients with signs of transtentorial herniation[5], which was refused by his family members due to hazards and unpredictable outcomes.

The experiences from this case can be summarized as follows. First, to avoid severe postoperative complications, it is required to take subtle manipulation to minimize intraoperative hypothalamus damage. Second, it is vital to take an effective strategy to manage the postoperative complications, such as DI, severe electrolyte imbalance, and CSF leakage, by experienced multidisciplinary teams. Third, the early differential diagnosis of CVST is essential when it develops the related clinical symptoms, especially in patients with a high risk of CVST postoperatively. Its diagnosis should be confirmed through magnetic resonance venography or digital subtraction angiography. Lastly, early acute anticoagulation treatment might reverse disease deterioration. Mechanical thrombectomy and decompressive craniectomy could be performed under appropriate conditions.