Research Domain of This Article
Public, Environmental and Occupational Health

The current corona virus disease 2019 outbreak caused by severe acute respiratory syndrome coronavirus 2 started in Wuhan, China in December 2019 and has put the world on alert. To safeguard Chinese citizens and to strengthen global health security, China has made great efforts to control the epidemic. Many in the global community have joined China to limit the epidemic. However, discrimination and prejudice driven by fear or misinformation have been flowing globally, superseding evidence and jeopardizing the anti-severe acute respiratory syndrome coronavirus 2 efforts. We analyze this phenomenon and its underlying causes and suggest practical solutions.

Core tip: The acute respiratory syndrome coronavirus 2 outbreak is a global public health issue. Fear and stigma are growing due to misinformation and unfounded rumors. As a global community, we need solidarity instead of stigma to limit the spread of corona virus disease 2019. Open and transparent information on the outbreak to the global public, and administrative warning from authorities in every country are necessary to reduce fear and discrimination.

The corona virus disease 2019 (COVID-19) outbreak caused by severe acute respiratory syndrome coronavirus 2 (SARS-CoV-2) appears to have started in Wuhan, China in December 2019[1-10]. Subsequently, it has spread within and outside China[10-12] and has become an unprecedented global public health issue[12-19]. Most cities in China heavily affected by the epidemic have been put on lockdown[1,2]. As of 18 February 2020, there have been 72528 confirmed infections, 1870 deaths in China (Figure 1 and Figure 2), and 804 confirmed cases with 3 deaths in 25 other countries[20]. To safeguard Chinese citizens and strengthen global health security, medical staff and government in China have made great efforts to control the epidemic[6-9,21]. It was confirmed that 1716 medical workers had been infected with SARS-CoV-2, and 6 died in hospitals for the control of epidemic on 14 February 2020[22]. Many in the global community have joined China in this effort[14,23,24]. 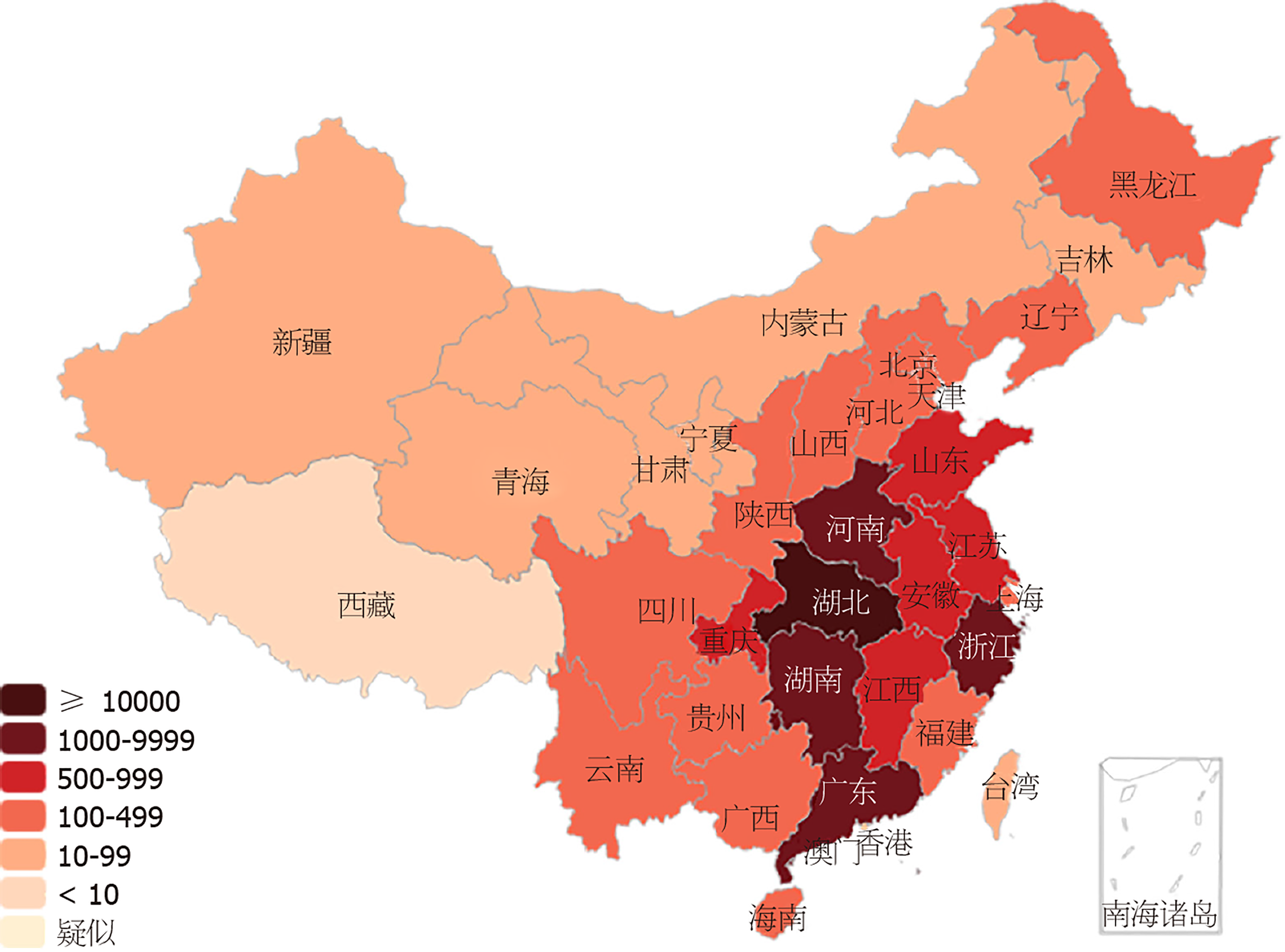 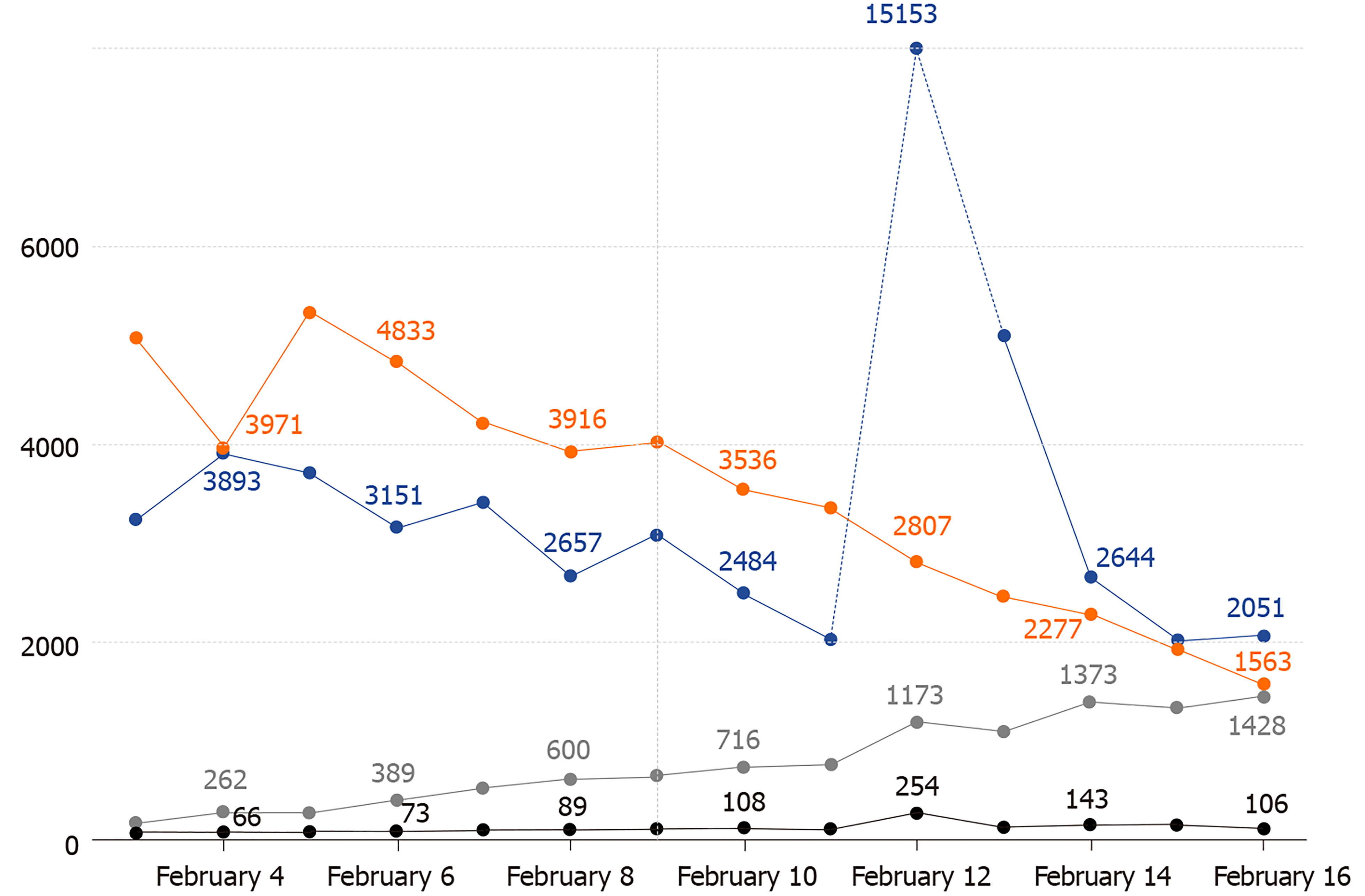 However, discrimination and prejudice driven by fear or misinformation have been flowing within and outside China[19,25-31], triggering panic and jeopardizing the response efforts of health workers and health authorities[25,32]. Importantly, discrimination, prejudice, and stigma make sick people reluctant to get medical help[19]. Nurses are prevented from accessing the areas where their rented houses are located[33]. This should be stopped[23,29].

WHEN SOME PEOPLE FEAR, THEY MAY STIGMATIZE OTHER PEOPLE

Psychologically, when the living environment changes, people feel unsafe, uneasy, and anxious[19]. When the cause of an epidemic is not clear, close-minded attitudes and rumors often flourish. Innocent people in Wuhan are targeted and unfairly blamed at a national level, and the same happens to Chinese people internationally[31].

Attempts to control the epidemic have involved isolation and quarantine, lockdown of an entire city, cancellation of flights, and evacuation of foreign nationals from Wuhan. As the World Health Organization’s (WHO’s) Director of Global Infectious Hazard Preparedness Sylvie Briand said, "Fear and stigma go together and when people fear, they tend to stigmatize some groups and what we try to do is to reduce this fear"[34].

FORMAL NOMINATION OF SARS-COV-2 AND COVID-19

The International Committee on Taxonomy of Viruses (ICTV) is responsible for developing the official classification of viruses and taxonomy of the Coronaviridae family. The Coronavirus Study Group (CSG) of ICTV evaluated the novelty of the new virus causing human infection in Wuhan, China tentatively named 2019-nCoV[35,36]. Based on phylogeny, taxonomy, and established practice, the CSG formally recognized this virus as a sister to SARS-CoVs of the species SARS-related coronavirus and designated it “SARS-CoV-2”[35]. China’s National Health Commission gave the virus a temporary name, the Novel Coronavirus Pneumonia[37]. The term “novel” may refer to that 2019-nCoV is only emerging and requires further studies and an incomplete match between the genomes of this and other previously known coronaviruses[35,38]. On February 11, 2020, WHO formally named the disease caused by SARS-CoV-2 as “COVID-19”[39]. WHO Director-General Tedros Adhanom Ghebreyesus said, “the name COVID-19 did not refer to a geographical location, an animal, an individual or group of people, and which is also pronounceable and related to the disease. Having a name matters to prevent the use of other names that can be inaccurate or stigmatizing. It also gives us a standard format to use for any future coronavirus outbreaks”[39].

Some people believe that viruses are present in the air for quite a long time, and fear being infected, thus becoming very anxious and angry, targeting people from Wuhan, and blaming them for spreading the virus[31]. Anecdotal evidence has shown Wuhan's families being "rejected and even hunted"[40]. Travel bans have been imposed, and when some people see a car with a Wuhan plate, they hit the car even when the driver is inside[40]. In some rural areas, vigilantes have even dug a ditch across the road to their villages to stop “outsiders” from entering[40]. An Indian person who was mistakenly thought to have SARS-CoV-2 infection, was so scared of transmitting the virus, that he committed suicide to protect his villagers[41]. Some posts have accused the United States of introducing the virus into China[31,42]. The SARS-CoV-2 outbreak is a perfect metaphor that illustrates the negative side of human societies[31].

Prejudice and bigotry have occurred with each huge epidemic in history. There is a link between imagining disease and imagining foreignness. For instance, when syphilis started to spread through Europe in the last decade of the fifteenth century, it was named a dreaded foreign disease, such as the Chinese disease by the Japanese, Morbus Germanicus by the Parisians, “French pox” by the English, Naples sickness by the Florentines. In 2003, Chinese were targeted for the epidemic of SARS-CoVs; in 2009, Latinos were widely targeted for the outbreak of swine flu; and in 2014, people of African origin were targeted for the Ebola crisis[31].

Indeed, as far as the SARS-CoV-2 is concerned, the virus is named the "China virus" or "Wuhan virus" by some westerners[30,31]. At the end of January of 2020, a newspaper in Denmark published a cartoon of the Chinese national flag that replaced the five symbolic stars with virus-like figures[30,31]. On February 3, 2020, the Wall Street Journal published an opinion column headlined "China Is the Real Sick Man of Asia"[25,31,32]. The Australian Herald Sun made reference to the virus as to a "Chinese virus" in a subtitle under a headline and blazoned "China Kids Stay Home" on its front page[25,30]. French papers ran articles headlined "New Yellow Peril" and "Yellow Alert"[25,30]. Some Chinese people in the United States and in European countries have been verbally or physically insulted simply because they were wearing masks[30,43]. In some parts of Europe, some people of non-Chinese Asian heritage have had to make clear that they are not Chinese[30,31,43].

Fear, prejudice, and discrimination can considerably impede anti-SARS-CoV-2 efforts[34]. A recent study of 138 hospitalized COVID-19 patients shows that SARS-CoV-2 can be transmitted from person to person through droplets and hand contact during an incubation period as well as on acute attack[2]. The closer we are to the truth, the farther we are from fear or panic. We think that open and transparent information on the outbreak to the public in China and the world, and administrative warning from authorities in every country are necessary to reduce fear and discrimination[34]. The health authorities should make the SARS-CoV-2 epidemic and essential preventive measures to the public in China and the world openly and transparently in time through radio, television, newspaper, WeChat, and the internet, i.e. washing hands and wearing a mask. A 24-h free hotline 7 d a week should be set up for public to respond to all the questions and concerns, relive the worries and panic, and clear the rumor or misinformation. The public hospitals should open COVID-19 clinics and mental health clinics to consult with people to clear panic and misinformation.

Likewise, government authorities in every country should cooperate with China to oppose stigma, language abuse and discrimination caused by the SARS-CoV-2 epidemic and strictly abide by disciplines and laws stress that our enemy is SARS-CoV-2 rather than the fear and stigma.

As Singapore's Prime Minister Lee Hsien Loong said, "The virus may have started in China but it doesn't respect nationality or race. It doesn't check your passport before it goes into your body and anybody can be infected"[30]. Indeed, the SARS-CoV-2 outbreak is not a Chinese issue, but a worldwide one. People can discriminate against each other, yet the SARS-CoV-2 never will. No boundary can stop the SARS-CoV-2 from interrupting the regular life of all of us on earth, reminding us that we are indeed a global community.

Stigma and discrimination are more harmful than the SARS-CoV-2 itself for our global efforts to control the outbreak. As WHO Director-General Tedros Adhanom Ghebreyesus said, "This is a time for facts, not fear. This is the time for science, not rumors. This is the time for solidarity, not stigma. This outbreak is a test of solidarity - political, financial and scientific. We need to come together to fight a common enemy that does not respect borders"[23].

Although the COVID-19 outbreak caused by SARS-CoV-2 started in Wuhan, China, it is now a global public health issue rather than a Chinese issue. As global community, we need solidarity instead of stigma or discrimination to contain the spread of SARS-CoV-2 outbreak. An open and transparent information on the outbreak to the global public, and administrative warning from authorities in every country are necessary to reduce fear and discrimination.