Although the patient with mucinous adenocarcinoma showed an atypical course, immunochemistry helped detect the disease origin.

A 62-year-old man, who complained of recurrent abscesses of the buttock, was referred to the Division of Colon, Rectum and Anus for treatment.

His vital signs were normal. He had several scars and nodules on the bilateral buttocks (Figure 1). Purulent discharge drained from one site on the left buttock. Other sites on the left buttock, which showed no drainage, were composed of granulation tissue. Several nodules with skin lesions on the right buttock were observed; however, the discharge was not purulent but serous. There were no lesions in the anus on digital rectal examination. The site of the skin nodule did not originate from the anus through physical examination. He had no symptoms indicative of other diseases. Finally, he was diagnosed with recurrent abscess due to HS at the first visit. 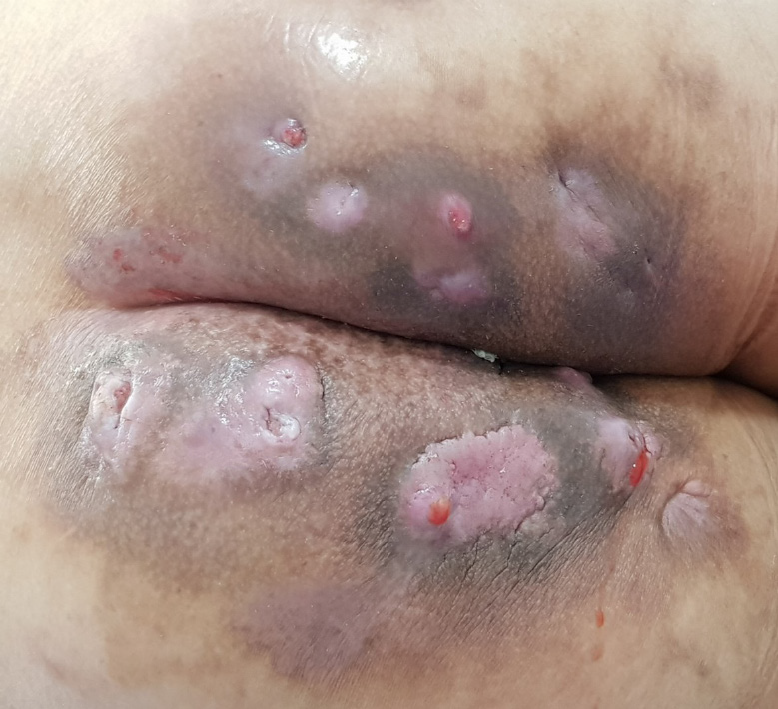 He underwent pelvic computed tomography (CT) before the operation because of the prolonged duration of symptoms suggesting the possibility of undiagnosed disease. CT showed an approximately 10 cm in length of abscess in the subcutaneous tissue of the bilateral buttocks (Figure 2A). There was no evidence of its relationship with the anus. After the first operation, he underwent gastroscopy, colonoscopy, transanal ultrasonography (TRUS), and positron emission tomography (PET) to determine the disease origin and condition, as he was diagnosed with mucinous adenocarcinoma. The results of all examinations other than PET were unremarkable. There was no evidence of anal fistula on TRUS. PET showed increased fluorodeoxyglucose uptake in the abscess cavity, buttock, and perianal wall (Figure 2B). It also showed increased fluorodeoxyglucose uptake in the prostate, which suggested inflammation or malignancy. The patient was diagnosed with inflammation of the prostate based on prostate biopsy findings.

He had no significant personal or familial history. Moreover, there was no history of cancer in his family.

The patient underwent incision and drainage in the first operation. All nodules on each buttock were connected. The cavity of the abscess was deep, and it was not limited to the subcutaneous area. The discharge was purulent and subsequently mucinous. The patient was diagnosed with mucin-containing adenocarcinoma and treated with wide excision of the abscess cavity in the bilateral buttocks and V-Y advancement flap in the second operation (Figure 4). The surgeons resected the cavities carefully to prevent rupture. The abscess cavities in the bilateral buttocks were connected through the deep posterior anal space. The surgeons checked the anus during the second operation but did not find any indication of hidden disease.

Figure 4 Photographs after the second operation. A: Wide excision; B: V-Y flap operation.
OUTCOME AND FOLLOW-UP

The patient has undergone clinical evaluation every 6 mo with a physical examination, laboratory test, and radiologic study. He has remained free of recurrence for 24 mo (Figure 5).

Figure 5 Follow-up magnetic resonance imaging after 24 mo. There is no recurrence. A: T1 weighted image; B: T2 weighted image.
DISCUSSION

It is difficult to diagnose mucinous adenocarcinoma of the perineum. They are usually associated with chronic inflammation and manifest as persistent symptoms, regardless of the conventional treatment[8,9]. Most patients present with perianal purulent discharge, a palpable peripheral mass, an ulcer or a recurrent abscess, which are non-specific symptoms regardless of original disease[3,4,9,10]. Patients with a tumor originating from a perianal fistula have a history of a fistula or persistent disease[3,11,12]. Although diagnostic criteria have been developed, the diagnosis of adenocarcinoma from a perianal fistula is difficult as the symptoms are nonspecific[6]. Therefore, mucinous discharge from the anal fistula provides evidence suggestive of carcinoma[13]. T2-weighted magnetic resonance imaging shows a high signal intensity in some cases[3,14,15]. However, many patients are diagnosed on the basis of official or operative biopsy[16,17].

Immunochemistry is commonly performed to determine the site of origin of the carcinoma[21,22]. CKs are an epithelial class of intermediate-sized filament proteins in the cytoskeleton[23]. CK7 is present in lung, breast, and female genital tract carcinomas[23]. CK20 is found in the gastrointestinal, urothelium, and Merkel cell carcinomas[23,24]. Adenocarcinomas of the small bowel, appendix, and colorectum express negative CK7 and positive CK20[23-25]. Although a report of a case of mucinous adenocarcinoma from perianal abscesses stated that CK7 and CK20 were immunopositive, the immunochemistry results in this study indicated that the carcinoma had a colorectal origin[3]. Another useful marker is CDX2, which indicates intestinal differentiation. CDX2 is a caudal homeobox gene related to the proliferation and differentiation of intestinal epithelial cells[26]. CDX2 expression presents in at least 85% of overall colorectal adenocarcinomas[26,27]. In this study, the first abscess of the patient developed in the left buttock, and the lesion persisted. The patient had no perianal symptoms. The initial diagnosis made in the outpatient clinic was recurrent HS. However, the immunohistochemistry results showed that the disease originated from the lower gastrointestinal tract. The authors suggested that this mucinous adenocarcinoma might be related to the anal fistulas that healed but remained as an abscess.

Mucinous adenocarcinomas of the buttock are rare and have uncertain etiologies and diagnostic criteria. They must be suspected in cases of continuous inflammation with an atypical course. Although the patient in the present case showed no evidence of fistula, immunochemistry was performed to detect the disease origin. Therefore, we need larger studies to confirm the etiology, diagnosis, and treatment of mucinous adenocarcinomas of the buttock.