Data regarding the neuroradiology features of the West Nile virus neuroinvasive disease (WNV NID) is rather scarce. To contribute to the knowledge of the WNV NID, we present a patient with a combination of encephalitis and acute flaccid paresis, with cauda equina arachnoiditis as the main magnetic resonance (MR) finding.

West Nile virus (WNV) infection is an emerging zoonosis spreading across Europe over the last two decades[1-4]. The most severe clinical presentation is WNV neuroinvasive disease (WNV NID), affecting less than 1% of infected persons. WNV NID usually presents as meningitis, encephalitis, acute flaccid paralysis, or as a combination of the conditions above[5]. Although rare, WNV NID can be life-threatening, may require long-term hospitalization and rehabilitation, and leave long-lasting neurological sequelae[6]. The epidemiology, clinical presentation, and virology diagnostic methods of WNV infection are well established[7]. However, data on the WNV NID imaging is rather scarce, based on small case series and individual case reports. In WNV NID, brain magnetic resonance (MR) images may be normal or may indicate nonspecific findings in the basal ganglia, thalami, mesial temporal areas, brainstem, and cerebellum. Spinal MR images may show abnormalities affecting various levels of the spinal or, in rare cases, cauda equina enhancement[8]. To contribute to the knowledge of the WNV NID, we present a patient with a combination of encephalitis and α-fetoprotein, with cauda equina arachnoiditis as the main MR finding.

In July 2018, a 72-year-old female, was admitted to a local hospital due to a three-day fever, progressive frontal and occipital headache, and gait instability.

At admission, the patient had a fever of 39.0 °C, while other vital signs were normal. She appeared weary, slow in verbal and motoric responses, but completely oriented. Meningeal signs were negative. Neurological examination revealed symmetric fine intention hand tremor and instability while sitting and walking. Physical examination was otherwise unremarkable, besides irregular pulse due to atrial fibrillation. The patient's laboratory data at admission are presented in Table 1.

On the 6th day, the patient developed somnolence, aphasia, disorientation, urinary retention with asymmetric lower extremity weakness (weaker right leg). Repeated brain multi-slice computed tomography was unremarkable. Spinal tap results are presented in Table 1. The diagnosis of encephalitis was established. Due to neurologic deterioration, the patient was transferred to the Department for Intensive Care Medicine and Neuroinfectology in a tertiary institution.

The patient was transferred to a tertiary institution in severely impaired general condition. Her vital signs were as follows: Temperature 36 °C, heart rate 160 beats per minute, respiratory rate 16 breaths per minute, blood pressure 140/85 mmHg and oxygen saturation in room air 95%. She was unable to walk or sit, she was somnolent, opening eyes on demand and demonstrating signs of Wernicke’s aphasia (impaired comprehension with meaningless speech), without obvious signs of cranial nerves’ dysfunction. Muscle tone, strength and deep tendon reflexes were normal on upper extremities, while low on inferior extremities, more on the right side. Plantar response was “silent” on both sides. Abdominal cutaneous reflexes were normal. The patient had urinary catheter placed due to urinary retention. Rectal tone was decreased, the patient was incontinent for feces, and anal wink test was absent. No tremor was noticed. Sensory exam could not be performed due to the patient’s limited communication abilities. The remaining physical examination was unremarkable, besides absolute arrhythmia due to atrial fibrillation.

The patient's laboratory results at admission to the tertiary institution are listed in Table 1. The cerebrospinal fluid (CSF) Gram-stain was unremarkable, the 16S rDNA test of CSF was negative, and the culture did not yield any pathogen. The CSF was further analyzed by polymerase chain reaction and proven negative for herpes simplex virus 1/2, varicella-zoster virus, enteroviruses and Listeria monocytogenes. Anti-HIV, HIV antigen and Treponema pallidum hemagglutination assay were negative. Serology for Borrelia burgdorferi in serum and CSF was negative. 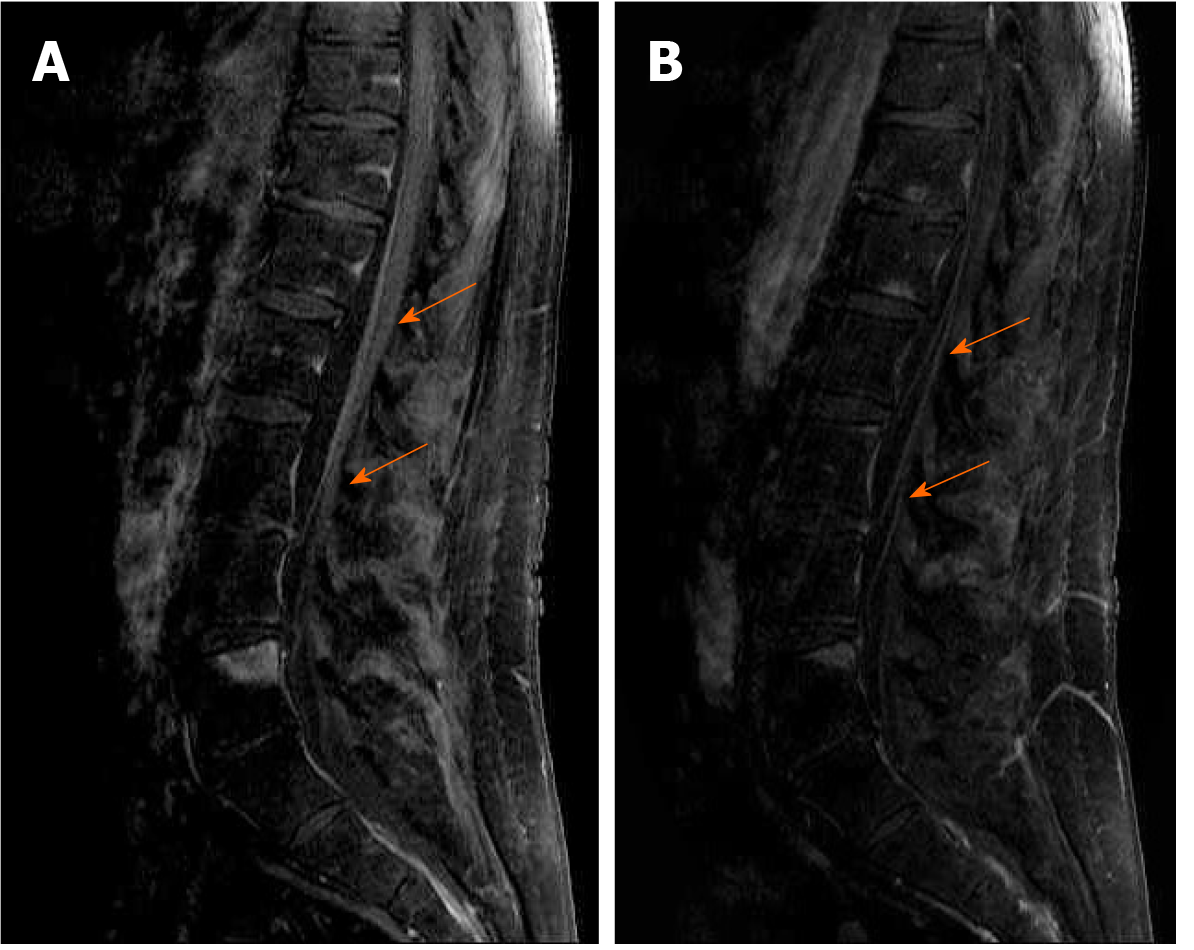 The electroencephalogram was diffusely irregular and diffusely slow. The electromyoneurography was not performed due to technical issues at the time.

The patient was retired, living alone and taking care of herself. Exposure history revealed that the patient lived in a rural suburb in the Karlovac County, about 200 m from the Kupa River. She denied contact with animals. A few weeks before the illness, she noticed frequent mosquito bites and no tick bites. She denied traveling during the past months, as well as vaccination.

The final diagnosis of WNV encephalitis with acute flaccid paresis of the lower extremities due to cauda equina arachnoiditis was established.

The presented case was identified as an index case of WNV infection in Croatia in 2018, diagnosed in Karlovac County, where no autochthonous WNV infections were previously reported[15].

The patient was hospitalized for eight weeks with a limited recovery. She recovered from aphasia but remained with a severe cognitive dysfunction. She was able to sit unassisted, but unable to walk. Lower extremity weakness slightly improved, but the patient remained incontinent for urine and feces. The hospitalization was complicated with healthcare-associated urinary tract infection and pneumonia. After two months the patient was discharged to a chronic rehabilitation facility where she succumbed to another pneumonia episode after a one-month period.

The presented WNV NID case raises several discussion points. The present knowledge about WNV NID neuroradiological findings is based on a rather small number of images. PubMed database search, using combination of terms “West Nile virus”, “WNV”, “encephalitis”, “myelitis”, “cauda equina”, and “magnetic resonance“ (MR), has identified seven publications in total (five case series and two individual cases). Four case series originated from the United States (three in 2002, one comprising patients from 1996 to 2016), and one from Serbia (in 2012)[6,8,16-18]. The total number of patients included was 147, the total number of patients with brain MR performed was 75, while the total number of patients with spinal MR was 33. Individual case reports present patients from 2012, one from the United States and one from Korea[19,20].

Most of the analyzed studies date back to the early 2000s[5,8,16,17]. Therefore, it would probably be useful to examine future WNV NID patients with new MR technologies to better characterize this clinical entity.

When analyzing only patients with abnormal spinal MR from the publications previously mentioned, the isolated cauda equina lesions were observed in seven, while combined spinal cord and cauda equina lesions were observed in three patients. Therefore, taking into consideration a rather small number of published cases, the question arises whether WNV has a predilection for the cauda equina. To provide an answer to this question, detailed neuroradiological examinations of the WNV NID patients are required. Clinicians as well as radiologists must be aware of this possibility, even though it is rare, and include a postcontrast scan of the spinal cord, cauda equina and nerve roots in the scanning protocol.

Only one study so far deals with the correlation of WNV NID neuroradiological findings and short-term disease outcomes[8]. It demonstrates that patients with fluid-attenuated inversion recovery and T2 weighted image brain and brain-stem changes have the worst outcomes, while the patients with spinal cord and nerve roots involvement have moderate-to-severe residual deficits. Indeed, new research demonstrating the correlation between clinical presentation, neuroradiological findings, and short and long-term outcomes is warranted.

Our case has one limitation. The electromyoneurography was not performed due to technical issues at the time. This diagnostic procedure is highly recommended to elucidate the complex neurophysiology of the weakness in WNV NID[24].

Nevertheless, our case is a rare and detailed description of WNV NID, presenting as encephalitis with cauda equina arachnoiditis. We believe it contributes to the knowledge of MR appearances in WNV NID.

Besides, this is the westernmost case since the first appearance of WNV NID in Croatia in 2012[25,26], occurring in Karlovac County, bordering the Republic of Slovenia.

Cauda equina arachnoiditis is occasionally described on spinal magnetic resonance in patients with WNV NID. Therefore, there is a possibility that WNV has a predilection for the cauda equina area. We propose that magnetic resonance of the entire neuroaxis should be carried out in WNV NID patients to better characterize this relevant emerging clinical entity and its outcomes.