In fatal cases of meningococcal septicemia, bacteriological diagnosis may not be straightforward due to postmortem replication and relocation of endogenic microflora. In medicolegal practice, aside from routine autopsy and histopathology, also other diagnostic methods, such as microbiological tests, immunohistochemistry and polymerase chain reaction (PCR), are used to examine body fluids and tissues.

We present the case of sudden death in a 2-year-old child. The patient died approximately 30 min after hospital admission before any routine diagnostic procedures were undertaken. Presence of whole-body rash and fulminant course of the disease raised suspicion of meningococcal septicemia. An autopsy was performed seven days after death when the body showed the signs of late postmortem decomposition. No etiological factor of septicemia could be identified based on macro- and microscopic findings. However, PCR demonstrated the presence of genetic material of group W Neisseria meningitidis in patient’s cerebrospinal fluid and blood.

Microbiological PCR should be conducted postmortem whenever a specific etiological factor could not be identified with conventional methods.

Core tip: We present the case of a 2-year-old patient who died suddenly with the signs of meningococcal septicemia. No etiological factor of the septicemia could be identified based on macro- and microscopic findings during an autopsy carried out seven days postmortem. However, the genetic material of group W Neisseria meningitidis was detected in cerebrospinal fluid samples based on polymerase chain reaciton (PCR). Our observations imply that microbiological PCR can be helpful in medicolegal practice, especially when an autopsy is delayed and the results of conventional bacteriological examination are unavailable or seem controversial.

Acute infections of the central nervous system still constitute a diagnostic and therapeutic challenge. Their course is severe, they usually co-exist with systemic infections, and are associated with high mortality. Neisseria meningitidis (N. meningitidis) infections are a particular threat since they may occur epidemically or pandemically, rather than sporadically or endemically. Although up to 12 serological groups have been identified among N. meningitidis strains, more than 90% of infections are caused by A, B, C, Y and W group isolates. Identification of N. meningitidis serogroups that predominate in a given country is vital for the development of local vaccination strategies.

Clinical presentation of N. meningitidis infections is similar like in the case of other bacterial neuroinfections. A common, albeit not pathognomonic symptom of meningococcal septicemia is purpuric rash, present in 10%-50% of cases. Aside from the rash, adrenal hemorrhages (Waterhouse-Friderichsen syndrome, WFS) can be observed in fulminant infections, especially in children. In fatal cases, bacteriological diagnosis may not be straightforward due to postmortem replication and relocation of endogenic microflora. In medicolegal practice, aside from routine autopsy and histopathology, also other diagnostic methods, such as microbiological tests, immunohistochemistry and polymerase chain reaction (PCR), are used to examine body fluids and tissues[1-5].

A 2-year-old boy was admitted to the Pediatric Emergency Room in an extremely poor general condition, with apnea, asystole, immeasurable oxygen saturation and the signs of severe brain injury (Glasgow Coma Scale 3). Based on the information from his father, the boy had a fever and adipsia for several hours and vomited twice. The symptoms appeared in the afternoon a day before the hospital admission; based on this presentation, a non-specific upper respiratory infection had been diagnosed by a family physician in an outpatient setting.

The patient passed away 30 min post-admission despite a resuscitation attempt undertaken at the Emergency Room. Examination of blood samples obtained at admission revealed normal leukocyte count with a decrease in neutrophil fraction and an increase in lymphocyte, monocyte and basophile percentages, elevated concentrations of urea, creatinine and C-reactive protein, considerable hypoglycemia, increased activity of aspartate aminotransferase with normal activity of alanine aminotransferase, a significant rise in lactate dehydrogenase, and procalcitonin above the upper detection limit.

Based on medical history, clinical and laboratory findings, patient’s death was attributed to septic shock. However, a medicolegal autopsy was requested by the prosecutor to establish the cause of death ultimately and to evaluate the correctness of outpatient medical treatment.

The autopsy was performed seven days after the patient’s death. External examination of the body revealed purpuric rash, more pronounced on the face, arms and chest, along with the signs of early decomposition (Figure 1). Cerebrospinal fluid (CSF) and blood samples were obtained aseptically before opening the body cavities. CSF was collected by means of suboccipital puncture, and blood by transthoracic puncture of the heart. Moreover, brain, lung, liver, spleen, heart and kidney samples were obtained, as aseptically as possible. Internal examination revealed massive hemorrhages in both adrenal glands (Figure 2), and petechiae in esophageal mucosa, thymus, subepicardial and subpleural tissue (Figure 3). No evidence of meningitis was found on macroscopic examination. 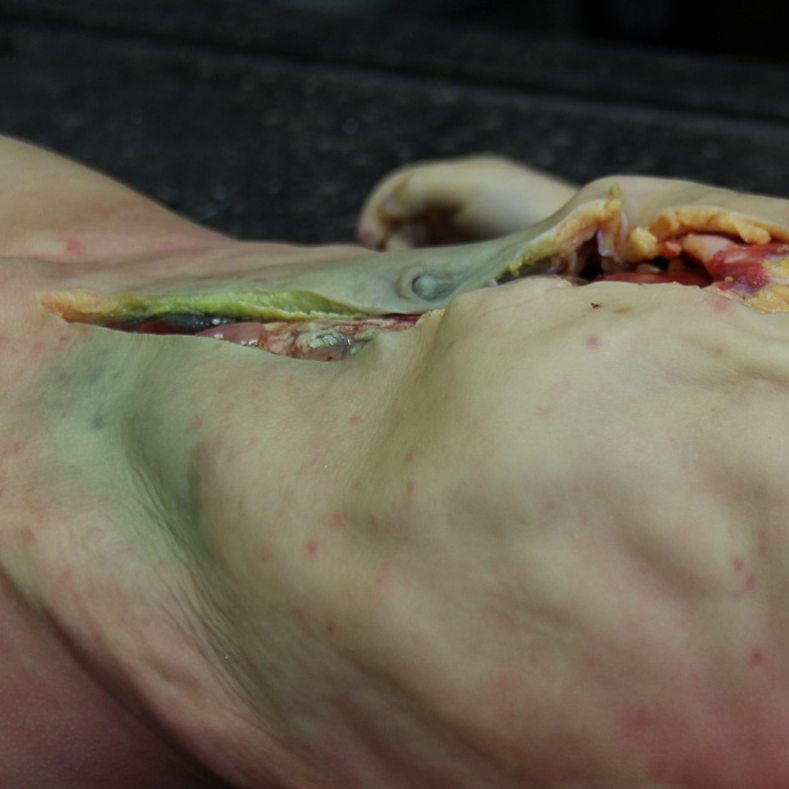 Figure 1 Purpuric rash on the chest and arms. Early decomposition. 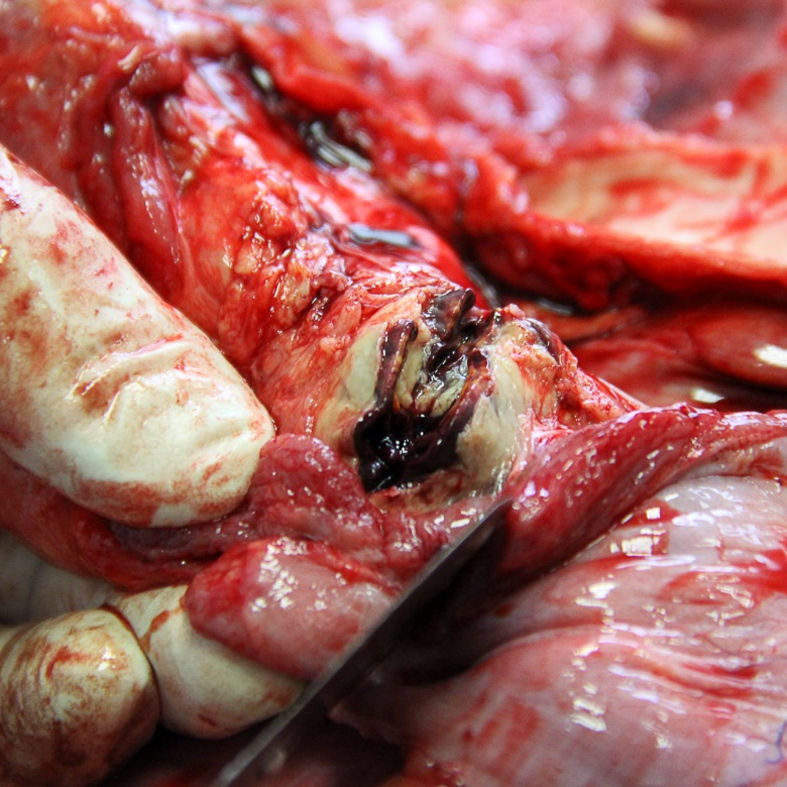 Figure 2 Hemorrhages in the adrenal gland. 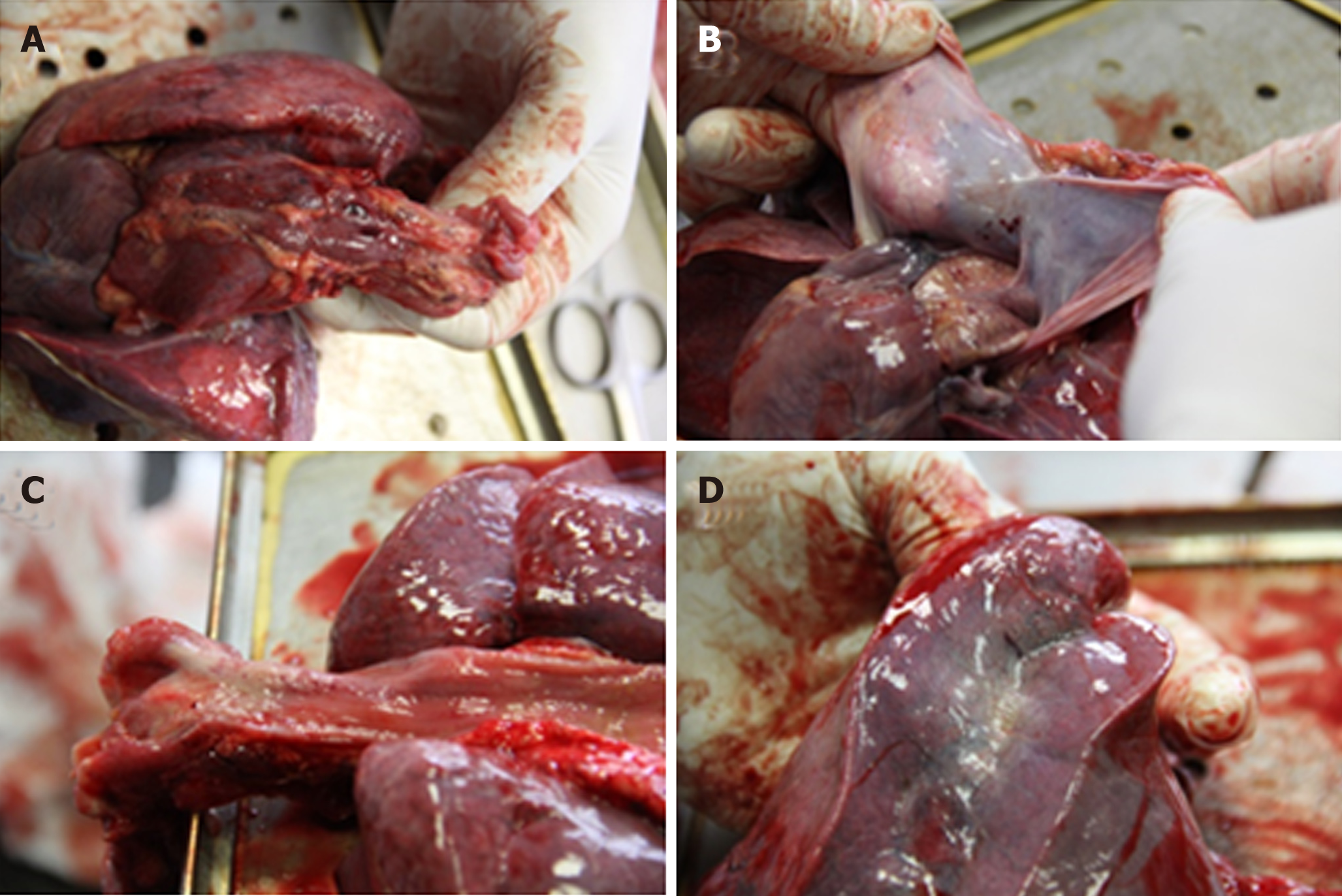 The macroscopic findings were confirmed on microscopic examination. The evidence of unspecific passive congestion was found in the brain, thymus, lungs, liver and spleen, along with fiber waviness in the heart. Moreover, massive hemorrhages at the corticomedullary junction were identified in both adrenal glands (Figure 4).

Since the autopsy was carried out seven days after the patient’s death, no microbiological studies were performed. However, the genetic material of group W N. meningitidis was detected in CSF samples using PCR. Due to the positive result of the test, other samples (skin, brain, lungs, liver, spleen, heart and kidneys) were not subjected to PCR examination.

Based on the results of autopsy, microscopic and genetic examination it was concluded that the boy died due to septic shock associated with a severe meningococcal disease with concomitant WFS, caused by group W N. meningitidis.

N. meningitidis is a fastidious, encapsulated, aerobic Gram-negative diplococcus being a leading cause of fatal sepsis and meningitis worldwide. Each case of suspected bacterial meningitis should be considered a medical emergency, since in untreated cases, mortality due to this condition may approximate 100%. The epidemiological profile of N. meningitidis varies from population to population and may change over time. This pathogen may be an etiological factor of meningococcal sepsis and WFS, a rare, life-threatening condition. In meningococcal WFS, initially macular rash progresses to large purpuric lesions penetrating deep into the skin and eventually causing subcutaneous necrosis. While WFS is usually associated with meningococcal infection, it may sporadically have different etiology, which puts particular emphasis on the correctness of causal factor identification[3-7].

Mortality due to meningococcal infections, especially WFS, can be decreased if these conditions are diagnosed early. Still some patients die despite medical treatment, especially if meningococcal disease is initially misdiagnosed as a common viral infection (cold, influenza, gastritis); in virtually all such cases, the correctness of medical intervention needs to be verified postmortem. Without adequate knowledge of basic clinical aspects of sepsis, patient’s history, symptoms and course of the disease, and circumstances of death, postmortem diagnostic findings can be easily misinterpreted. This, in turn, may result in erroneous medicolegal opinion about the cause of death and/or correctness of medical treatment[8]. Postmortem diagnosis of fulminant meningococcal sepsis is particularly challenging if no CSF samples were obtained from a living patient. The evaluation can be further compromised due to the incompleteness of medical documentation or complete lack thereof, sudden death, and a serious delay in the autopsy.

During the medicolegal autopsy, the pathologist should carefully examine the cadaver for all potential abnormalities and signs of inflammation present on external and internal examination. Although sepsis does not produce any pathognomonic lesions that can be identified by microscopic examination, the latter should be a vital component of each postmortem evaluation[9].

Examination of the CSF is of paramount importance for the diagnosis of all forms of meningitis. Other materials that can be examined microbiologically postmortem include blood (especially from the heart), urine, nasal discharge, throat and skin swabs. However, several Neisseria species, among them N. meningitidis, can colonize nasopharynx and skin in healthy humans, and thus, their isolation from these locations should be interpreted with care[10].

Early administration of antibiotics may hinder microbiological confirmation of meningococcal disease. Further, isolation of the bacteria from the blood or CSF obtained postmortem may not necessarily correspond to a true positive result but may be associated with the agonal spread, translocation after death or contamination. Most of the above seem to be unrelated to the cause of death[11-13].

Postmortem detection of meningococcemia based on the presence of specific meningococcal capsular polysaccharides in the blood is a well-established diagnostic option. The results of the test are rarely false positive, even when conducted long after death, on blood samples with heavy bacterial load and/or deep hemolysis, stored for a long time at 40°C, and containing anticoagulant[14].

Both laboratory and clinical studies demonstrated that PCR, especially real-time PCR, are sensitive and specific enough to detect meningococcal disease. Also other new diagnostic tests, e.g., fluorescence in situ hybridization and mass spectrometry, are suitable for this purpose. Nevertheless, none of these methods has been validated as a postmortem test. Only a few previously published reports documented the accuracy of late postmortem molecular identification of N. meningitidis in the CSF and other body fluids, such as blood from the heart and vitreous humor[2,11,15,16]. Our hereby presented experiences add to this sparse evidence, demonstrating that detection of N. meningitidis in the CSF obtained up to 7 days after death is still possible.

Postmortem isolation of N. meningitidis from the CSF of the patient who died seven days earlier is an important finding from both medical and medicolegal perspective. Our observations imply that PCR can be helpful in medicolegal practice, especially when an autopsy is delayed and the results of conventional bacteriological examination seem controversial. Postmortem PCR is a valuable instrument to determine the etiology of WFS diagnosed with conventional tests. Plausibly, suboccipital puncture, although more technically demanding, is a more appropriate route of CSF collection than traditional sampling from the cavities, due to a lower risk of secondary bacterial contamination. However, this hypothesis needs to be verified in future prospective studies. To summarize, our hereby presented findings imply that molecular microbiology should be accepted wider as a technique for postmortem evaluation.