Neurofibromatosis type I (NF1) is the most frequent subtype of neurofibromatosis. Its related tumor-suppressor syndromes are characterized by a predisposition to multiple tumor types and other disorder presentations. In addition, the incidence of tumors is much higher in patients with neurofibromatosis type I. However, there are very few reports at home and abroad on this topic. Here, we present a case of NF1 with spindle cell sarcoma.

A 50-year-old male was found to have a right axillary mass for 20 years. Specialist examination found cafe-au-lait spots on many parts of the skin, rounded nodules in the skin, a bulge in the right armpit, touching a lump (10 cm × 6 cm, hard, unclear boundary, poor mobility, local tenderness). The anterior side of the thigh felt weakened on the opposite side; in the right groin a swollen lymph node (hard, clear border, good mobility, local tenderness). According to the results of positron emission tomography/computed tomography, puncture pathology and immunohistochemistry, genetic testing, a diagnosis of NF1 with spindle cell sarcoma was confirmed. According to the genetic testing result, the patient was given a targeted treatment with crizotinib.

Surgery, chemotherapy and radiotherapy are the main treatment methods of NF1. However, with the continuous progress of molecular biology research, molecular targeted therapy may bring benefits for patients.

Core tip: Neurofibromatosis type I with malignant tumor is very rare. Because of its rarity in clinical practice, there are many uncertainties in the selection of treatment regimens. Therefore, it is necessary to study the effective and reasonable standard treatment regimens. We present a case of neurofibromatosis type I with soft tissue sarcoma. Since there is limited evidence of targeted therapy for this disease, the selection of treatment strategies should be based on rich clinical experience and research.

Neurofibromatosis type I (NF1), also known as von Recklinghausen disease, is an autosomal dominant neurocutaneous disorder caused by a mutation in the NF1 gene, and it usually presents during the first decade of life. NF1 is the most frequent subtype of neurofibromatosis (approximately 97% of NF patients), with a family history of approximately 50% and an incidence of 1/3000[1-3]. Clinical manifestations include abnormal skin pigmentation (cafe-au-lait patches and freckles), multiple discrete dermal neurofibromas, iris hamartomas known as Lisch nodules, bone dysplasia, mental retardation, and affected tissue and organ damage (neural, skeletal, visceral). In addition, approximately 10%-25% of patients may experience involvement of the digestive system (e.g., bleeding, perforation, intestinal obstruction, etc)[4,5].

The exact pathogenesis of NF1 is unclear, and mutations in the NF1 gene are important causes of NF1. Moreover, NF1 is also associated with the development of tumor, disease efficacy, prognosis, and even poor resistance to certain tumor types[6]. In recent years, it has been found that malignancies are up to four to six times more common in patients with NF1 than in the general population, and the probability of malignant connective tissue tumors or other soft tissue tumors is 34 times than that of unaffected people[7]. The expression of NF1 is highly variable in patients with the same mutation and within the same family. Large complete gene deletions (5%–10%) have a severe clinical phenotype with intellectual disability, higher benign tumor burden, and higher incidence of malignant nerve sheath tumors[3]. NF1 fibromatosis is usually benign, and cases of malignant transformation are rare. There are few reports on NF1 with undifferentiated pleomorphic sarcoma at home and abroad. A case of NF1 with spindle cell sarcoma is reported as follows.

A 50-year-old male with a mass and pain at the right fossa iliaca for 3 mo.

There was no history of chronic diseases such as coronary heart disease, hypertension, and diabetes. About 20 years ago, the right fossa iliaca mass was found in the health examination (about 4 cm × 4 cm), and a resection operation in the local hospital was performed (specifically unknown). 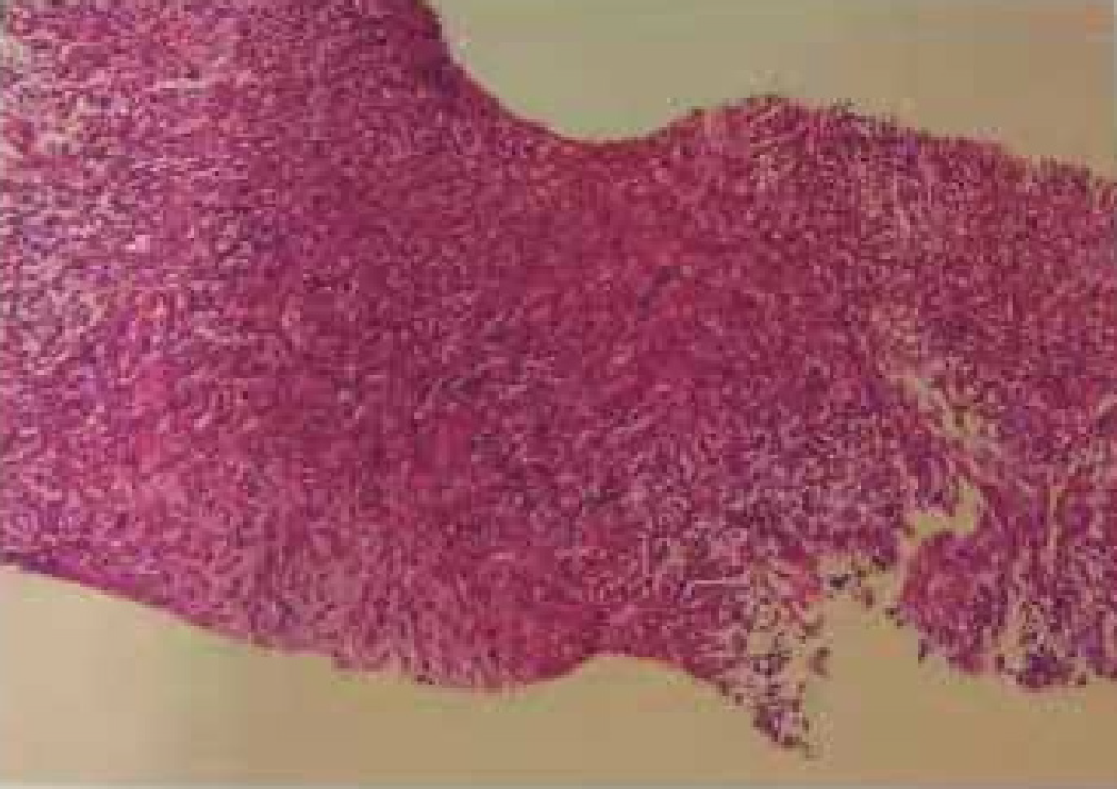 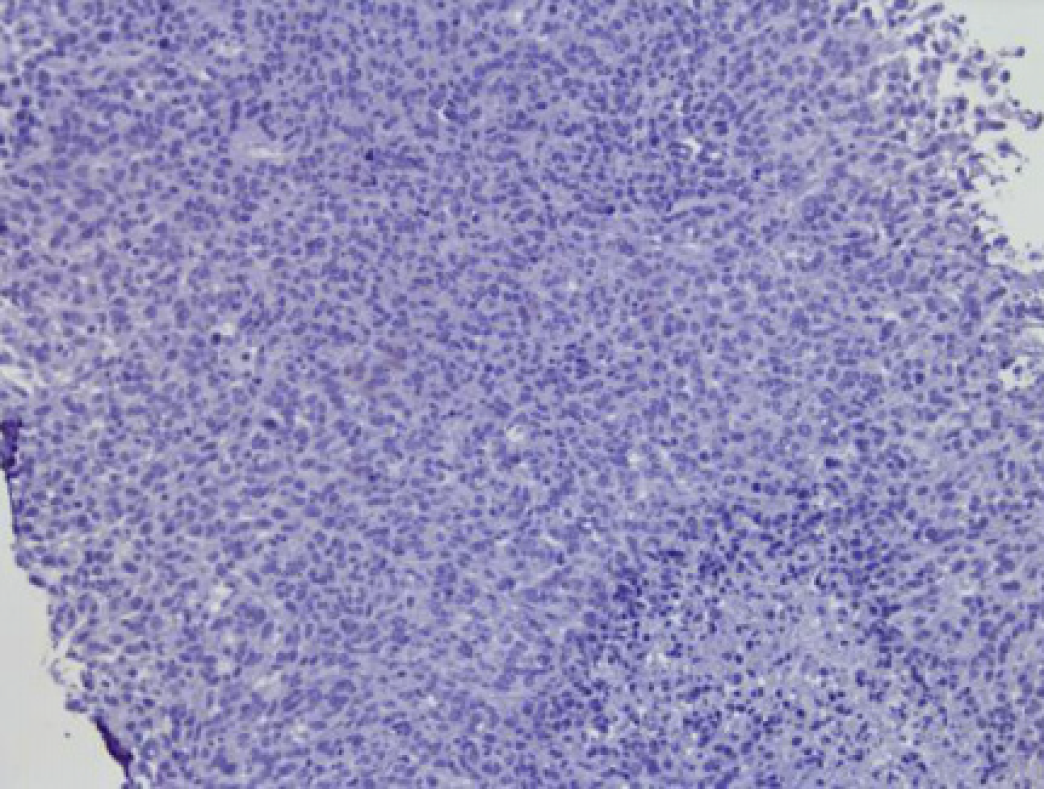 Chest-enhanced computed tomography (CT) revealed soft tissue masses in the subpleural and horizontal fissures of the right middle lobe of the right lung. Multiple soft tissue nodules were seen under the chest wall on both sides, and neurofibromatosis was considered in combination with medical history. The mediastinum and the main bronchus were moved to the right. There was pleural thickening of the right upper lobe with localized atelectasis. Abdominal pelvic magnetic resonance (MR) revealed a solid cystic mass in the right abdomen and right hip, and multiple small nodules in the abdominal wall, considering neurofibromatosis. Positron emission tomography (PET)/CT is shown in Figure 3. In the right fossa iliaca there was a large soft tissue mass shadow (Figure 3A), the size was about 11.1 cm × 9.3 cm × 17.5 cm, and fluorodeoxyglucose (FDG) metabolism increased. The upper part of the mass showed a non-uniform cystic change, and the radioactive uptake of the cystic area was relatively reduced. The right iliacus was involved; the soft tissue mass in front of the right gluteus maximus (Figure 3B) was about 8.9 cm × 5.1 cm in size, and FDG metabolism was increased; the pleura in the right middle lobe showed multiple adjacent fusiforms (Figures 3C and D). FDG metabolism increased at the marginal site; multiple nodules were seen in the skin of whole body, and FDG metabolism was not increased. Combined with medical history, skin neurofibromatosis may be considered, and hypermetabolic lesions may be considered malignant transformation. 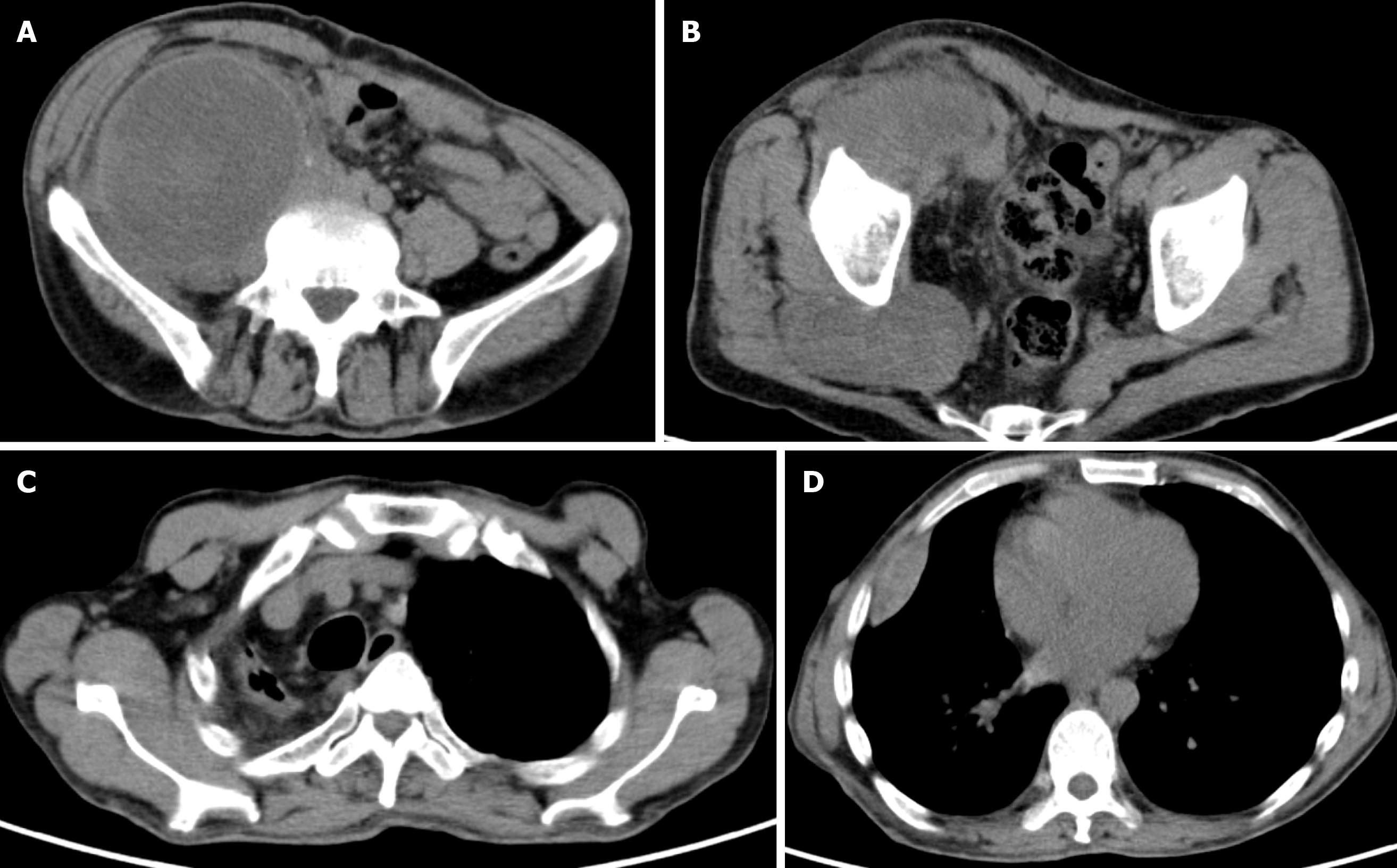 Figure 3 Positron emission tomography/computed tomography image of type I neurofibromatosis patient. A: Soft tissue masses in the subpleural and horizontal fissure of the upper middle lobe of the right lung. Multiple soft tissue nodules were observed subcutaneously on both chest walls. Mediastinum and main bronchus shift to the right; B: Multiple adjacent spindle shapes were seen in the lateral pleura of the middle lobe of right lung, and fluorodeoxyglucose metabolism was increased in the peripheral area; C: In the right axilla, a large soft tissue mass is seen. The size is about 11.1 cm × 9.3 cm × 17.5 cm, the metabolism of fluorodeoxyglucose is increased, the upper part showed uneven cystic changes, and the cystic area was irradiated with relatively low uptake; the right diaphragm is involved; D: The soft tissue mass in front of the right gluteus maximus. The mass is 8.9 cm × 5.1 cm, and the metabolism of fluorodeoxyglucose is increased.
FINAL DIAGNOSIS

Because the patient refused surgery, and his general condition could not tolerate chemotherapy or radiotherapy, and after considering the patient’s condition, anti-angiogenic therapy was recommended according to the National Comprehensive Cancer Network (NCCN) guidelines. An oncology expert from another hospital recommended that, based on the results of genetic testing, crizotinib can be considered. After communication with the patient and his family, the patient chose crizotinib as the treatment plan. The patient was given crizotinib 250 mg twice a day.

The patient was discharged home after taking medication and continued medication at home. Follow-up continues for monitoring the patient’s progress.

NF1 is an autosomal dominant genetic disease caused by abnormal development of neural crest cells with no significant gender or racial propensities[8], and it is one of the diseases with the highest mutation rate. Studies have found that mutations in the NF1 gene located in the periphery of the 17q11.2 center are important causes of NF1[9]. This NF1 gene encodes a protein called neurofibromin, which consists of 2818 amino acids. It is a tumor suppressor that negatively regulates the Ras signaling pathway[10]. Mutation in the NF1 gene (such as heterozygous, loss-of-function mutations, etc) results in the loss of function of neurofibromin with increased RAS activity, ultimately leading to increased proliferation and tumorigenesis, especially in the cutaneous and nervous tissues[3,11]. The clinical manifestations of NF1 are diverse, and most of them meet the diagnostic criteria of the National Institutes of Health (Table 1).

The NF1 type is benign but has a certain rate of malignant transformation. The risk of malignant transformation of NF1 in life is estimated to be 2% (in those over 21 years old, this increases to 4.2%)[12]. Most of the NF1 type malignant transformation is converted to malignant peripheral nerve sheath tumors, but some cases may be associated with heterologous differentiation components[13]. Common heterologous components are rhabdomyosarcoma, chondrosarcoma, osteosarcoma, and angiosarcoma, and there are very few adenoid and squamous epithelial components. Undifferentiated pleomorphic sarcoma is a rare tumor that occurs more commonly in the extremities of patients during the sixth and seventh decades of life and is more common than malignant peripheral nerve sheath tumor that happens in young adults[14]. Differentiating between benign and malignant tumors is important for prognosis and treatment planning of NF1 patients. Meanwhile, characterization of malignant tumors is important for pre-operative treatment planning and selecting the best approach for resection as well. As a result, correlation inspection is necessary (including CT scan, MR imaging, pathological examination, gene detection, etc)[15,16]. The final diagnosis of malignant transformation of NF1 depends on pathological examination. When there is clinical manifestation of NF1 type, pathological examination of tumor cells for atypical, mitotic, and neoplastic necrosis should be diagnosed as sarcoma, whether the sarcoma variable component is a single sarcoma. On the other hand, gene detection is a new path to distinguish NF type, and it can guide doctors to choose better treatment plans for patients.

Clinical manifestations of this patient are a light brown spot on the skin of the whole body, and there are multiple, uneven pyknosis under the skin, distributed in the face, neck, trunk, and limbs, which is in line with the diagnostic criteria for clinical diagnosis. In the past 6 mo, the patient’s right humerus mass increased rapidly, accompanied by tingling of the mass and radiation pain in the front of the right thigh, which was suspected of malignant transformation. According to the biopsy pathology, immunohistochemistry and positron emission tomography/CT examination results, NF1 with spindle cell sarcoma was diagnosed. Because the patient has not undergone surgical pathology, the origin of the malignant soft tissue sarcoma was not clear.

Although surgery, chemotherapy, and radiotherapy are the main treatment methods of NF1, continuous progress of molecular biology research in molecular targeted therapy opens the possibility of new methods for treatment. Given the limited evidence for the best choice of treatment, more case reports are needed to determine optimal treatment strategy.