Donor-origin cancer is a well-recognized but rare complication after liver transplantation (LT). The rise in the use of extended criteria donors due to the current shortage of organs increases the risk. Data on donor-origin neuroendocrine neoplasms (NENs) and the most appropriate treatment are scarce. Here, we report a case of a patient who developed a NEN confined to the liver after LT and was treated with liver re-transplantation (re-LT).

A 49-year-old man with no other medical co-morbidities underwent LT in 2013 for alcoholic liver cirrhosis. The donor was a 73-year-old female with no known malignancies. Early after LT, a hypoechogenic (15 mm) lesion was detected in the left hepatic lobe on abdominal ultrasound. The lesion was stable for next 11 mo, when abdominal magnetic resonance identified two hypovascular lesions (20 and 11 mm) with atypical enhancement pattern. Follow-up abdominal ultrasound revealed no new lesions for the next 2.5 years, when magnetic resonance showed a progression in size and number of lesions, also confirmed by abdominal computed tomography. Liver biopsy proved a well-differentiated NEN. Genetic analysis of the NEN confirmed donor origin of the neoplasm. As NEN was confined to liver graft only, in 2018, the patient underwent his second LT. At 12 mo after re-LT the patient is well with no signs of NEN dissemination.

The benefits of graft explantation should be weighed against the risks of re-LT and the likelihood of NEN dissemination beyond the graft.

NENs are a rare heterogeneous group of neoplasms arising from the diffuse neuroendocrine system commonly located in the gastroenteropancreatic or bronchial tract[1]. NENs confined to the liver are a rare entity. With the aging of the population, the incidence of NEN has increased[2-5]. Notably, NENs are difficult to diagnose and at the time of diagnosis usually have metastasized in about 50% of cases[6]. In selected cases, non-resectable liver metastases are an acceptable indication for LT[7,8].

Donor-origin NENs are extremely rare and data on the most appropriate treatment are scarce, ranging between different non-surgical and surgical options that include conversion or reduction of immunosuppression, chemotherapy, locoregional therapy, or LT with modest results[9-12].

Given the scarcity of data regarding the management of this entity after LT, we believe it is important to share single experiences and collect as much data as possible to form future evidence-based recommendations. Here, we present a case of a donor-origin NEN confined to the liver and treated with liver re-transplantation (re-LT).

The patient reported no complaints.

A 49-year-old Caucasian man with no medical comorbidities underwent LT in 2013 due to alcoholic cirrhosis. His Model of End Stage Liver disease score was 17. The deceased donor was a 73-year-old woman with no known malignancies, who died of intracerebral hemorrhage. Two other recipients received kidneys from this donor. The patient’s postoperative period was uneventful and his immunosuppression consisted of tacrolimus, mycophenolate mofetil, and a prednisone taper.

His physical examination was unremarkable.

Imaging follow-up continued and 11 mo after LT, abdominal magnetic resonance (MR) identified two hypovascular lesions (20 and 11 mm) with an atypical enhancement pattern: Peripheral enhancement in the arterial phase and hypovascularity in the portal venous and hepatobiliary phases (Figure 1A and B). The lesions showed restriction on diffusion-weighted images (Figure 1C and D). Abdominal US follow-up revealed no new lesions for the next 2.5 years. At year 3 after LT, MR showed multiple lesions throughout the liver, confirmed also by abdominal computed tomography (CT) and described as secondary lesions (Figure 2A-C). 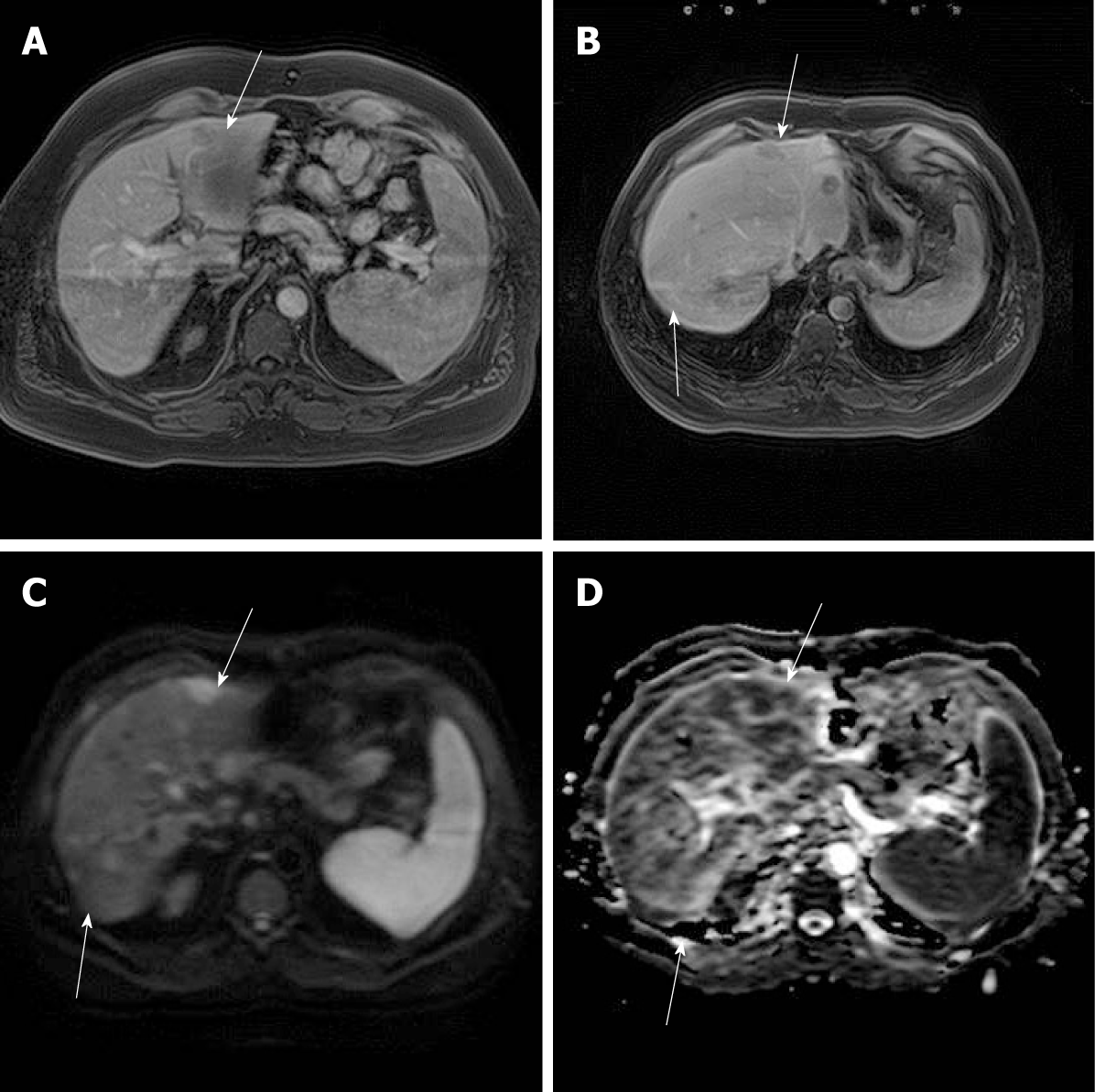 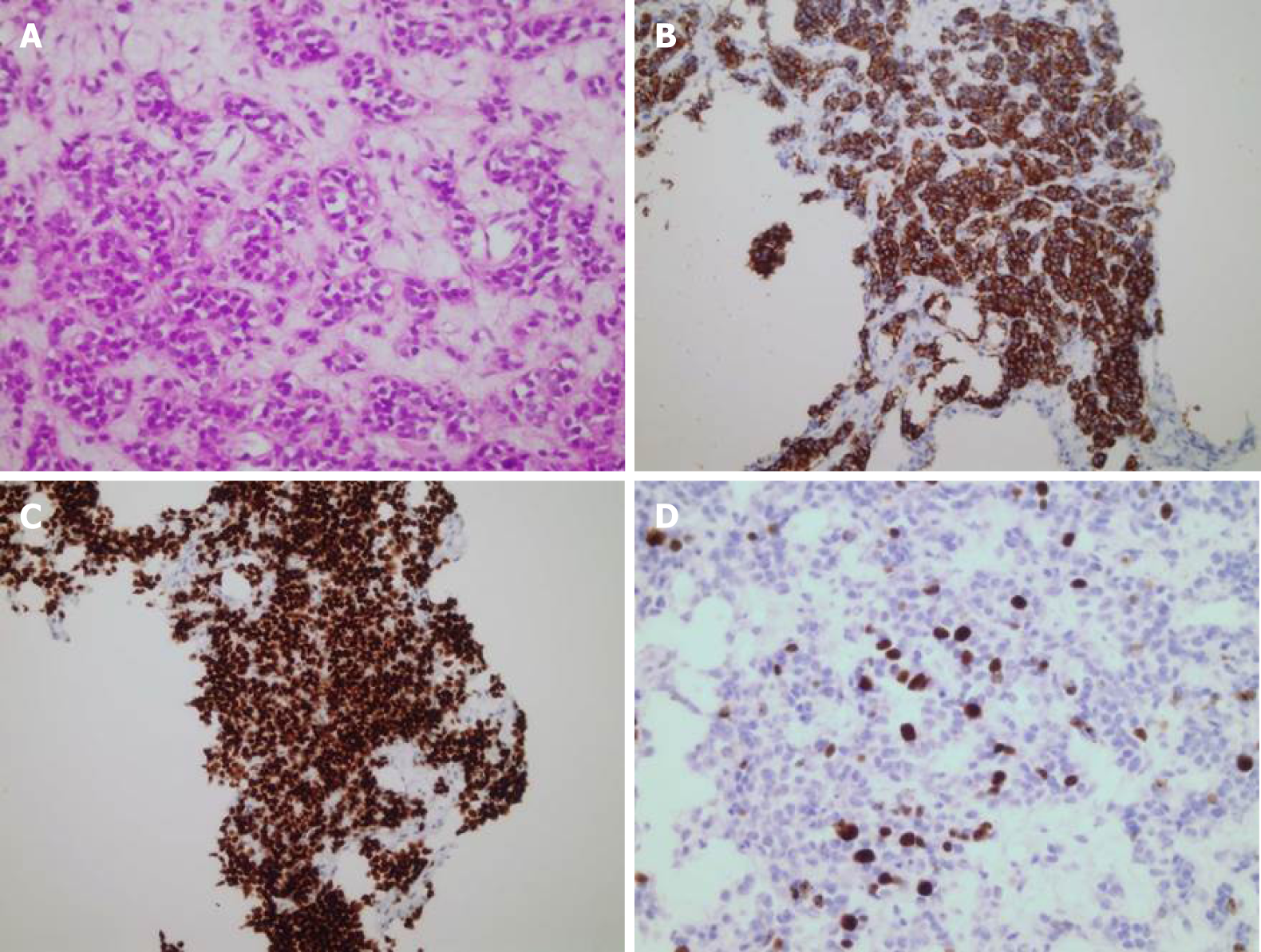 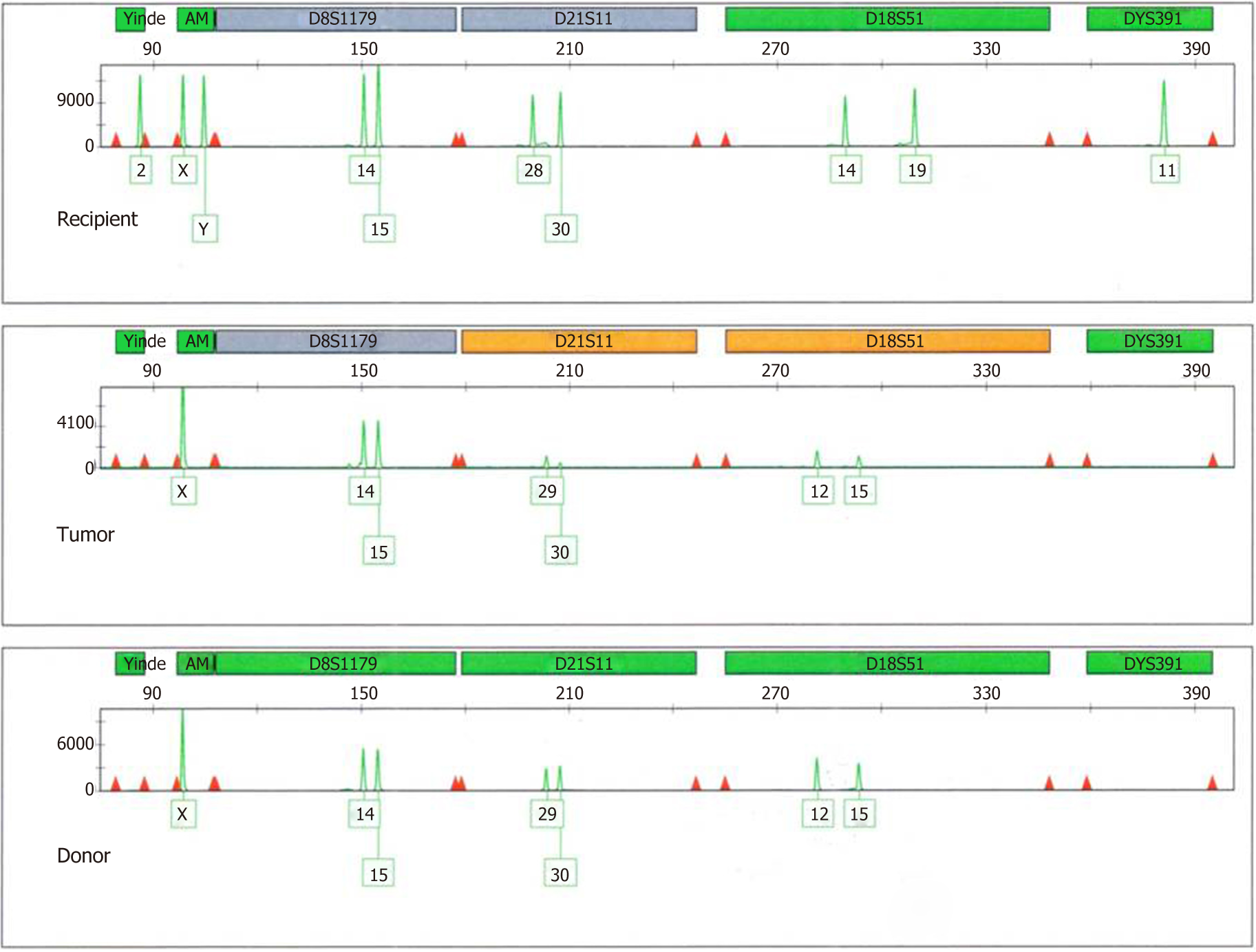 The final diagnosis of the case presented is a well-differentiated donor-origin NEN, classified as lung-NEN, atypical carcinoid (AC).

The multidisciplinary team decided that re-LT was the best treatment option for the patient, and he was re-listed on the liver waitlist. In 2018, 5 years after his first LT, the patient received a second whole liver graft from a deceased donor. No other NEN treatments were performed before the second LT. Multiple whitish, partially hemorrhagic, soft nodules up to 0.5 cm diffusely occupied 60% of the explanted liver graft. Morphology and immunohistochemistry of tumors were identical to the biopsied liver tumor.

At 12 mo after re-LT, the patient is well and on maintenance immunosuppression consisting of tacrolimus and mycophenolate mofetil, with no signs of NEN dissemination as confirmed by PET-CT.

The risk of donor-transmitted (present at the time of LT) or donor-derived (developed within the graft after LT) cancer is rather small, ranging from 0.017% to 0.03%[13,14]. However, given the current shortage of donors in the face of increasing organ demand, this risk could increase in the future. The use of extended criteria donor organs has risen, especially the use of older donors and donors with comorbidities. In the Eurotransplant region in 2013, 454 liver donors (22.9%) were 65 years of age or older[15] and the percentage has slowly risen to 26.6% in 2017[16].

The risk of donor-transmitted cancer should be reduced by careful screening of the donor; however it is impossible to abolish it. Even though our donor pool is aging and shifting to margins of “reliable and safe,” the standardized donor work-up in many cases still does not include thoracic and abdominal CT scans.

In our case, in 2013 the use of an organ from a 73-year-old donor was considered a good opportunity for an end-stage alcoholic patient, whose clinical deterioration was not reflected by a high laboratory Model of End Stage Liver disease score. The donor had no comorbidities other than hypertension and acute pyelonephritis, and was screened by both thoracic and abdominal CT scans, where the only detected abnormality was a left adrenal adenoma.

Detection of a small lesion in the graft early after LT had initially aroused suspicion of a donor-transmitted tumor, but given the size stability as well as atypical morphological characteristics mimicking hemangioma during the follow-up, it was monitored routinely. Three years later, the multiple liver lesions indicated liver biopsy, which revealed a well-differentiated NEN.

Gastro-enteropancreatic NENs are classified based on the proliferative index Ki-67, whereas lung NEN (Lu-NENs) classification is based on mitotic counts and assessment of necrosis[17,18]. TTF-1 is a useful marker of pulmonary origin; however, only a minority of well-differentiated Lu-NETs are TTF-1-positive[19]. Immuno-histochemical staining in our case suggested a tumor of pulmonary origin, and fitted a histologic variant of AC-an intermediate-grade malignant tumor. Lu-NENs are rare tumors with an incidence rate ranging from 0.2 to 2/100000 population/year. AC is the most uncommon of the Lu-NENs[20,21]. Lu-NENs demonstrate a heterogeneous clinical behavior, but many of the well-differentiated tumors are indolent and slow growing with a 5-year survival that can be up to 50-70%[22].

The presented donor Lu-NEN in an immunocompromised patient had a favorable biology, with a slow growing course in the graft and no dissemination beyond the liver. This strongly favored the argument for LT as the best long-term treatment option for the patient.

Donor-origin NENs are extremely rare, and only a handful of cases have been reported in the literature to date[9-12]. Two separate cases of undifferentiated neuroendocrine small-cell carcinoma demonstrated an aggressive course after LT and a poor outcome. Both were detected early, at 4 mo after LT. The first case was considered for re-LT, but as peritoneal spread was noted during the exploration this option was rejected. The patient’s immunosuppression was switched to rapamycin and chemotherapy was initiated but the patient died 6 mo after LT[10]. In the second case, the patient was also converted to rapamune-based immunosuppression, with addition of locoregional therapy (yttrium-90 spheres), followed by systemic chemotherapy with etoposide and cisplatin and re-LT. However, early after the second LT, tumor detection in the pancreatic tissue led to a near-total distal pancreatectomy and splenectomy, while multiple brain lesions resulted in hydrocephalus requiring ventriculostomy, radiotherapy, and systemic topotecan chemotherapy. The patient died 17 mo after his first LT[11]. An additional two cases of donor-origin NENs management after LT are reported in the literature. The first case was detected 9 mo after LT and was treated with cessation of immunosuppressive therapy and addition of systemic taxol and carboplatin chemotherapy. The duration of the follow-up in this case is unknown[9]. In the second case, a poorly differentiated case of NEN with Ki67 index of 4% was detected 5 years after LT and treated with re-LT and conversion to sirolimus-based immunosuppression. A recurrence was detected 2 years after his second LT. Locoregional therapy (yttrium-90 spheres) with systemic subitinib and octreotid therapy was initiated. The patient died 3 years after his re-LT[12].

A recent report of two cases of NENs that were incidentally detected during living donor hepatectomy substantiates the unavoidable risk of donor-transmitted tumors, also in the living donor pool. Both living donors were young (26 and 29 years) and underwent preoperative examinations. In both cases, intestinal NENs were detected intraoperatively after right hepatectomy in the small intestine and appendix. Both donors and recipients were closely followed up, and neither developed any tumor suspected lesions[23].

The risk of donor-transmitted or donor-derived tumor is small, but unavoidable. It is possible that it will increase in the future due to the use of extended criteria donors, which are becoming a substantial part of our donor pool. The risk should be minimized by careful screening of the donor; however, at the time of listing, it is important that potential recipients are informed about it. In the context of donor-derived neuroendocrine tumors after LT, the management is individualized and the benefits of graft explantation should be weighed against the risks of re-LT and the likelihood of NEN dissemination beyond the graft.

The authors thank Marijana Mašić, BSc for her assistance and Ivona Paurović for valuable technical help regarding genetic analysis.