We report a case of tracheal CXPA in a 55-year-old woman, who presented with a more than 3-mo history of progressive dyspnea. Computed tomography of the neck and thorax revealed an inhomogeneous, broad-based lesion arising from the tracheal wall on the right side. Endoscopy revealed a subglottic neoplasm causing up to 90% luminal stenosis. The tumor was resected using a high-frequency electrosurgical snare combined with argon plasma coagulation. Histopathology and immunohistochemistry revealed that the tumor was a CXPA of the trachea.

We report the fourth case of tracheal CXPA, and present the first instance of resection of CXPA using high-frequency electrosurgical snare and laser ablation. We also discuss the pathogenesis, diagnosis, histopathology, and systemic therapy of this rare disease.

Core tip: After extensive search of literature in English, there are only 3 previous reports of primary Carcinoma ex pleomorphic adenoma of the trachea. In our case, there are many unique features. In imaging examination, there is no calcification can be seen in the primary tracheal CXPA of the previous cases, but ours can. Given the rare incidence of CXPA in trachea, no standard systemic therapy options have been established. We successfully performed endobronchial resection of the tumor with a high-frequency electrosurgical snare combined with argon plasma coagulation with less injury and quick recovery.

A 56-year-old woman was admitted to our hospital with a complaint of progressive dyspnea over the last 3 mo.

The patient had no history of disease in the head and neck region. Her past history was unremarkable.

The family history was unremarkable.

The patient's inspiratory phase was prolonged and the inspiration was laborious. There were wheezing, laryngeal ringing, and three depressions sign can be seen. Her temperature was 36.8 °C, heart rate was 102 bpm, respiratory rate was 26 bpm, blood pressure was 133/86 mmHg and oxygen saturation in room air was 96%.

A computed tomography scan of the neck and thorax revealed an inhomogeneous, broad-based lesion arising from the tracheal wall on the right side. The lesion measured 1.8 cm × 1.7 cm. Calcification was observed in the anterior part of the lesion (Figure 1). On bronchoscopic examination, a subglottic neoplasm was observed at approximately 5 cm from the carina. The tumor caused up to 90% luminal stenosis of the trachea (Figure 2). 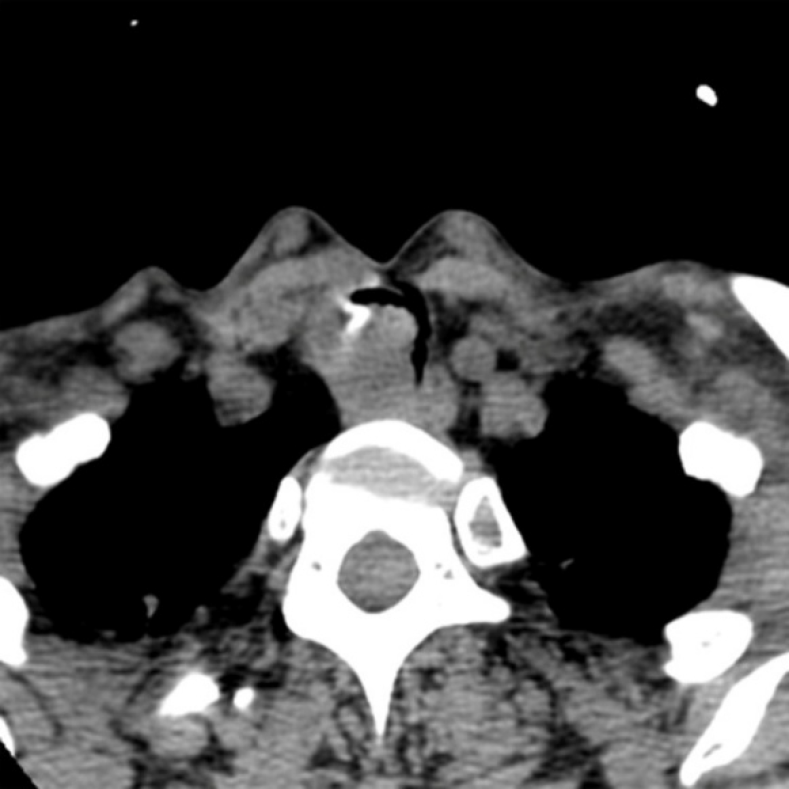 Figure 1 Computed tomography scan showing an inhomogeneous, broad-based lesion arising from the tracheal wall on the right side. Calcification can be seen in the anterior part of the tumor. 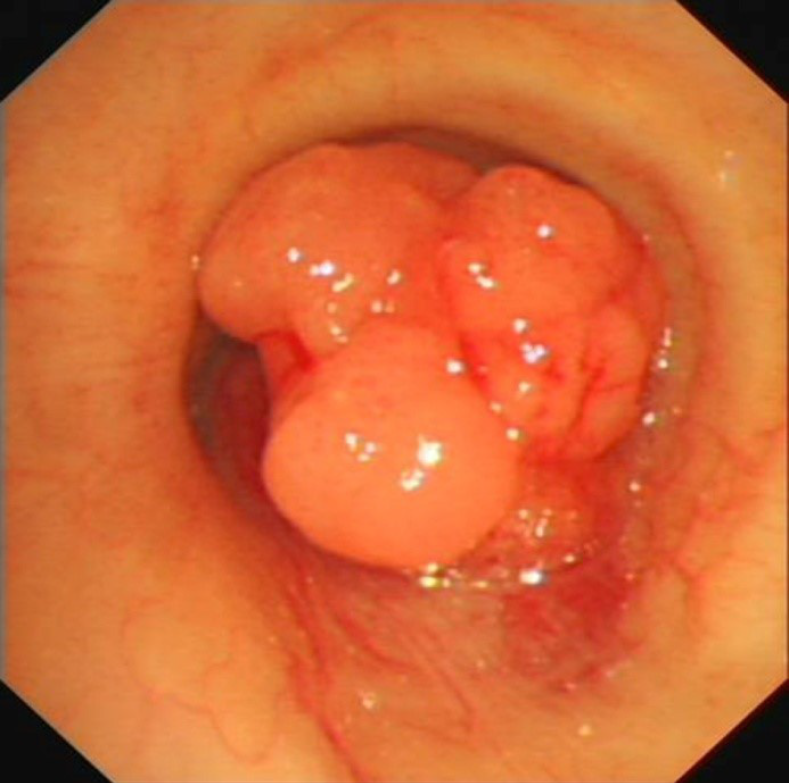 Take together, a final diagnosis of primary CXPA of the trachea was established.

The tumor was resected using a high-frequency electrosurgical snare combined with argon plasma coagulation (APC). At 30 min before the operation, the patient was anesthetized with 5 mL of 2% lidocaine (inhaled via oxygen-driven atomization) and an intranasal drip of lidocaine combined with 1% furosemide. Propofol 20 mg and fentanyl 100 mg were intravenously administered before surgery. During the surgery, intravenous propofol was administered through a micropump (2-4 mg/kg/h). Throughout the treatment, the patient’s pulse, oxygen saturation, respiration, and blood pressure were dynamically monitored. Routine nasal insertion of a bronchoscope was performed to reach the lesion site. A high-frequency electrosurgical snare and an APC catheter were inserted into the airway through the bronchoscope. The power supply for electrocutting (35-40 W) and electrocoagulation (30-35 W) was turned on at the same time. To resect the tumor, we placed the snare near the base of the tumor and slowly closed it around the tumor pedicle while simultaneously applying electrocoagulation.

For the remaining tumor tissue in the basal part, we placed the electrocoagulation probe on the lesion and applied a current for 0.5-1.0 s. Electrocoagulation was performed multiple times to coagulate and vaporize the lesion. The necrotic tissues were removed using biopsy forceps or bronchoscopic suction. The surgical field was intermittently rinsed with a cold saline solution containing adrenaline (dilution, 1:10000) to maintain a clear view. The depth of electrocoagulation did not exceed 3 mm. After APC treatment, jelly-like cellulosic exudates and necrosis may form and lead to airway obstruction; these need to be cleaned regularly by using biopsy forceps or bronchoscopic suction.

On histopathological examination, benign pleomorphic adenoma-like areas and large malignant cells with pleomorphic and prominent nucleoli were recognized (Figure 3). The tumor was composed of glandular and tubular structures along with myoepithelial cells within stromal elements, which was suggestive of a pleomorphic adenoma. In the epithelial areas, solid nests and cords of polygonal tumor cells were observed. The adjacent areas showed chondromyxoid materials. The solid nests had a cribriform pattern, and were associated with dense hyalinized stroma, which was incorporated into the tumor islands and sheets. The cribriform pattern was suggestive of adenoid cystic carcinoma (Figure 4). 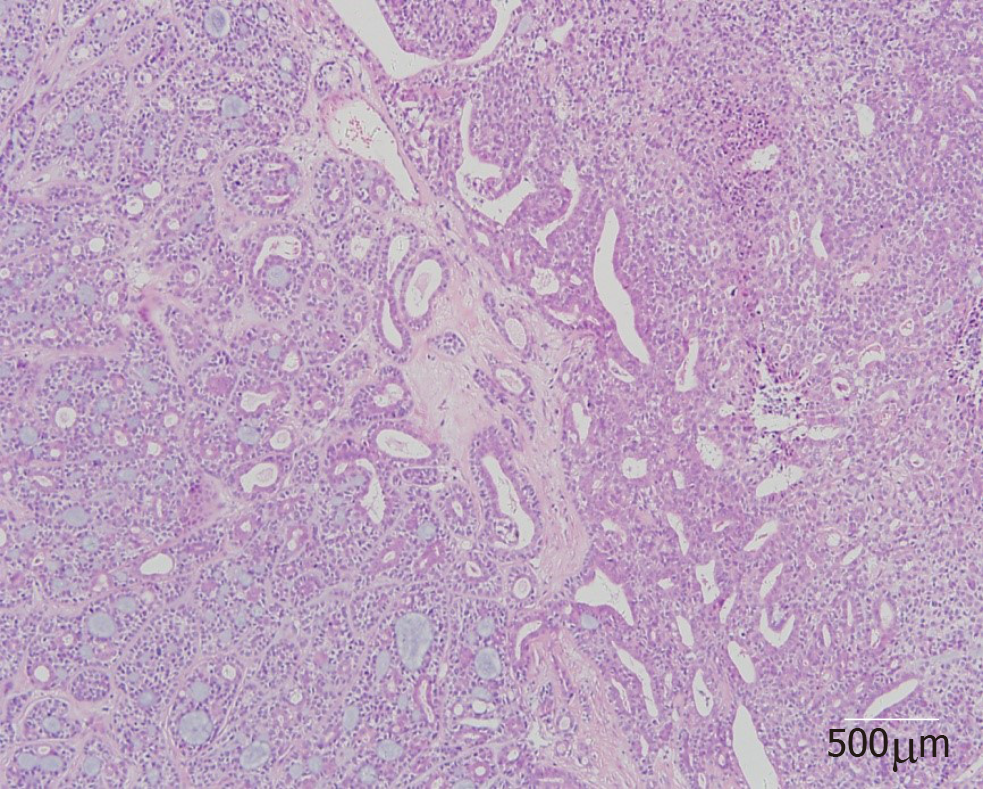 Figure 3 Microscopic examination of the resected specimen showing a biphasic composition with benign histological characteristics suggestive of pleomorphic adenoma and malignant changes in the epithelial components (hematoxylin and eosin). 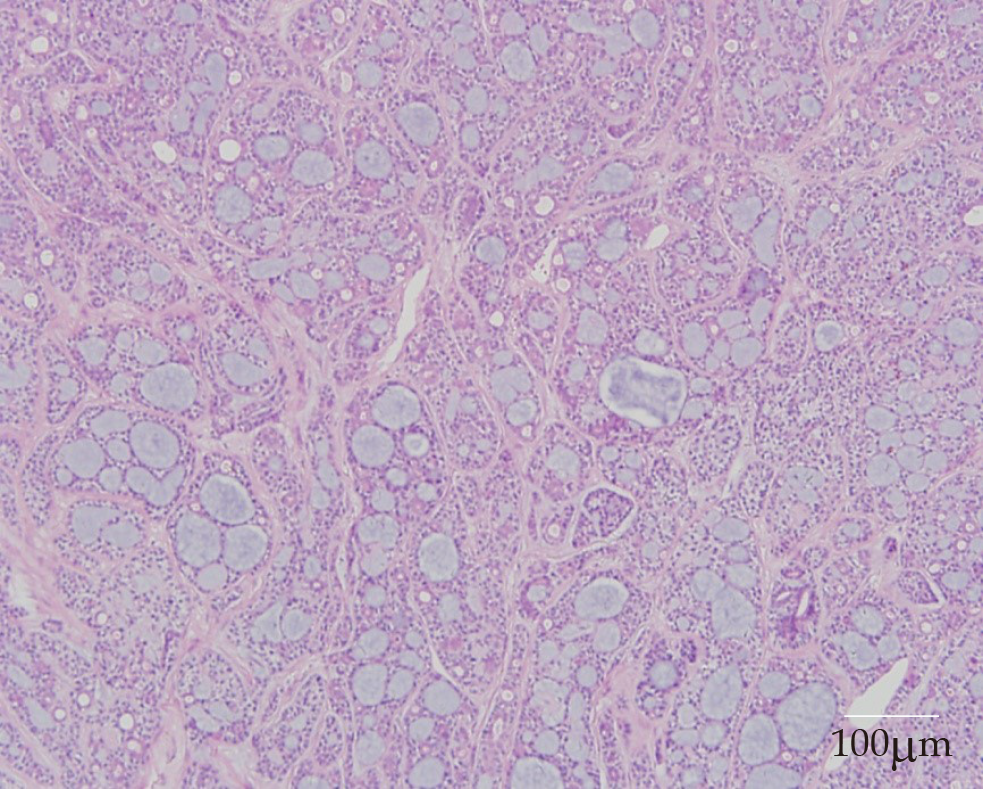 Figure 4 Microscopic examination of the resected specimen showing solid nests in a cribriform pattern associated with hyalinized stroma, which is incorporated into the tumor islands and sheets (hematoxylin and eosin).

At 6 d after the tumor resection, the patient was well and was discharged. Unfortunately, fiberoptic bronchoscopy revealed tumor recurrence after 11 mo. The patient again underwent treatment with a high-frequency electrosurgical snare combined with APC. Additionally, postoperative radiotherapy (60 Gy) was performed. The patient has been well for 10 mo until now after the second surgery.

CXPA is defined as an epithelial malignancy arising in or from a primary or recurrent benign pleomorphic adenoma[1,3-4]. This tumor most commonly affects the salivary glands. Primary CXPA of the tracheobronchial system has been reported only infrequently. The pathogenesis of CXPA is unknown. Chooback et al[5] proposed a role for the deficiency of some genes, such as those on chromosomal arms 8q, 12q, and 17p. Kim et al[6] suggested that the accumulation of genetic instabilities was the main cause of malignant transformation in pleomorphic carcinoma. The above hypotheses were based on salivary gland tumors, and it is unclear whether these apply to CXPA of the tracheobronchial system.

Malignant mixed tumors of the salivary glands classically encompass three distinct tumors: CXPA, carcinosarcoma, and metastasizing pleomorphic adenoma[7]. A review of the literature disclosed 11 previous cases of primary malignant mixed tumors of the trachea and bronchus[8-13]. Of these, only four cases (Ding et al[10], Demirağ et al[11], Hemmi et al[12], and Mori et al[13]) involved the trachea (Table 1); the others involved the hilum and/or bronchi. In the case reported by Hemmi et al[12], no foci of benign pleomorphic adenoma were found in the primary tumor. This indicates that the tumor was a malignant pleomorphic adenoma, and not a CXPA. Thus, only three cases of true primary CXPA of the trachea have been reported. The present case is the fourth report of a primary CXPA of the trachea.

A review of the four previous cases of tracheal malignant mixed tumors showed that the ages of the patients ranged from 56 to 69 years; there were two women and two men. Our patient was a 55-year-old woman. The common clinical symptoms were cough, asthma, and dyspnea; hoarseness was reported by Mori et al[13]. Thus, tracheal CXPA may not have distinct symptoms. On imaging examination, no calcification could be seen in the previous four cases, but calcification was present in our patient.

Given the rarity of tracheal CXPA, no standard systemic therapy options have been established. Surgery appears to be the primary treatment modality, and postoperative radiotherapy may be used in patients with poor prognostic factors, such as stage III/IV disease, perineural invasion, and distant metastasis[15]. Endoscopic resection is simple, convenient, safe, and effective, and is associated with minimal injury and rapid recovery. It is widely applied in the diagnosis and treatment of benign airway stenosis, including that caused by tracheobronchial pleomorphic adenoma[16]. However, Gaissert et al[17] noted that bronchoscopic resection does not provide confirmation of the resection margins and can leave tumor behind, which leads to tumor recurrence. Studies on the endoscopic resection of tracheal tumors have not provided long-term follow-up data[18]. In the three previous reports of primary tracheal CXPA, all patients were treated conservatively with complete excision. For our patient, we successfully performed endobronchial resection of the tumor with a high-frequency electrosurgical snare and laser ablation. Demirağ et al[11] and Mori et al[13] performed postoperative radiotherapy for their patients. Postoperative radiotherapy was not performed by Ding et al[10] and in the present case. The necessity and benefits of postoperative radiotherapy remain unclear at present. If distant metastases are present, effective regional radiation in addition to resection may provide meaningful palliation. The three previous patients were free of disease for 3 mo[9], 16 mo[12], and 30 mo[10] after tumor resection. In our patient, the tumor recurred after 11 mo. However, whether bronchoscopic resection and the lack of postoperative radiotherapy led to tumor recurrence in our patient cannot be definitively stated at present.

In conclusion, given the rarity of CXPA in the trachea, no standard systemic therapy options have been established. Endoscopic resection is a simple, safe, minimally invasive, and effective method for treating CXPA patients.