A 66-year-old woman was admitted to our hospital with the complaint of abdominal distention and a decreased appetite for 1 mo. The patient had a 20-year history of hepatitis B surface antigen positivity and a 5-year history of cirrhosis. She had been treated with Chinese herbal medicine for a long time. Liver function tests showed: alanine aminotransferase, 35 U/L; aspartate aminotransferase, 42 U/L; serum albumin (ALB) 32.2 g/L; and serum ascites ALB gradient, 25.2 g/L. Abdominal ultrasonography and enhanced computed tomography showed that the left branch of the PV was thin and occluded; the right branch of the PV was thick and showed a vermicular dilatation vein cluster in the upper pole of the right kidney that branched out and converged into the inferior vena cava from the bare area of the lower right posterior lobe of the liver. We diagnosed her with an extremely rare SPIVCS caused by portal hypertension and provided symptomatic treatment after admission. One week later, her symptoms disappeared and she was discharged.

SPIVCS is a rare portosystemic shunt with a clear history of cirrhosis and portal hypertension. Clarifying the type PV shunt has important clinical significance.

Core tip: Here we report a spontaneous intrahepatic portal vein (PV)-inferior vena cava shunt. A 66-year-old woman was admitted to our hospital with a 20-year history of HBsAg and a 5-year history of cirrhosis. Abdominal ultrasonography and enhanced computed tomography showed that the left branch of the PV was thin and occluded; the right branch of the PV was thick and showed a vermicular dilatation vein cluster in the upper pole of the right kidney that branched out and converged into the inferior vena cava from the bare area of the lower right posterior lobe of the liver.

We recently encountered a 66-year-old woman with a 20-year history of hepatitis B surface antigen (HBsAg) positivity. We found that she had an extremely rare SPISS, a spontaneous intrahepatic PV-IVC shunt (SPIVCS) caused by portal hypertension.

A 66-year-old woman was admitted to our hospital with the complaint of a 1-mo history of abdominal distention and decreased appetite.

The patient also had a 20-year history of HBsAg positivity and had been treated with Chinese herbal medicine for a long time. In the past 5 years, she had been diagnosed with cirrhosis induced by hepatitis B by a rural doctor.

No alcohol abuse and no other drug and herbal used. No additional family history. While her daughter had history of HBsAg positivity but no history of hereditary diseases.

A physical examination revealed a blood pressure of 135/82 mmHg, heart rate of 78 beats/min, temperature of 36.8°C, and breathing rate of 18 times/min. Her skin was dark and gloomy; no yellowing of the skin and mucosa was evident; visible liver palms and spider angioma, an abdominal bulge, and visible abdominal wall vein exposure were evident, and splenomegaly (4 cm below the left midclavicular line–left ribs junction) were evident; no abdominal pain was reported; and the ascites buckle sign was positive.

Abdominal ultrasonography revealed that echoes of the liver showed dense thickening and an uneven intrahepatic structure disorder; the liver capsule was unclear and irregular. The right branch of the PV showed obvious dilatation (local dilatation, up to 48 mm), was connected with the IVC, and showed a turbulent local spectrum, as shown in Figure 1. 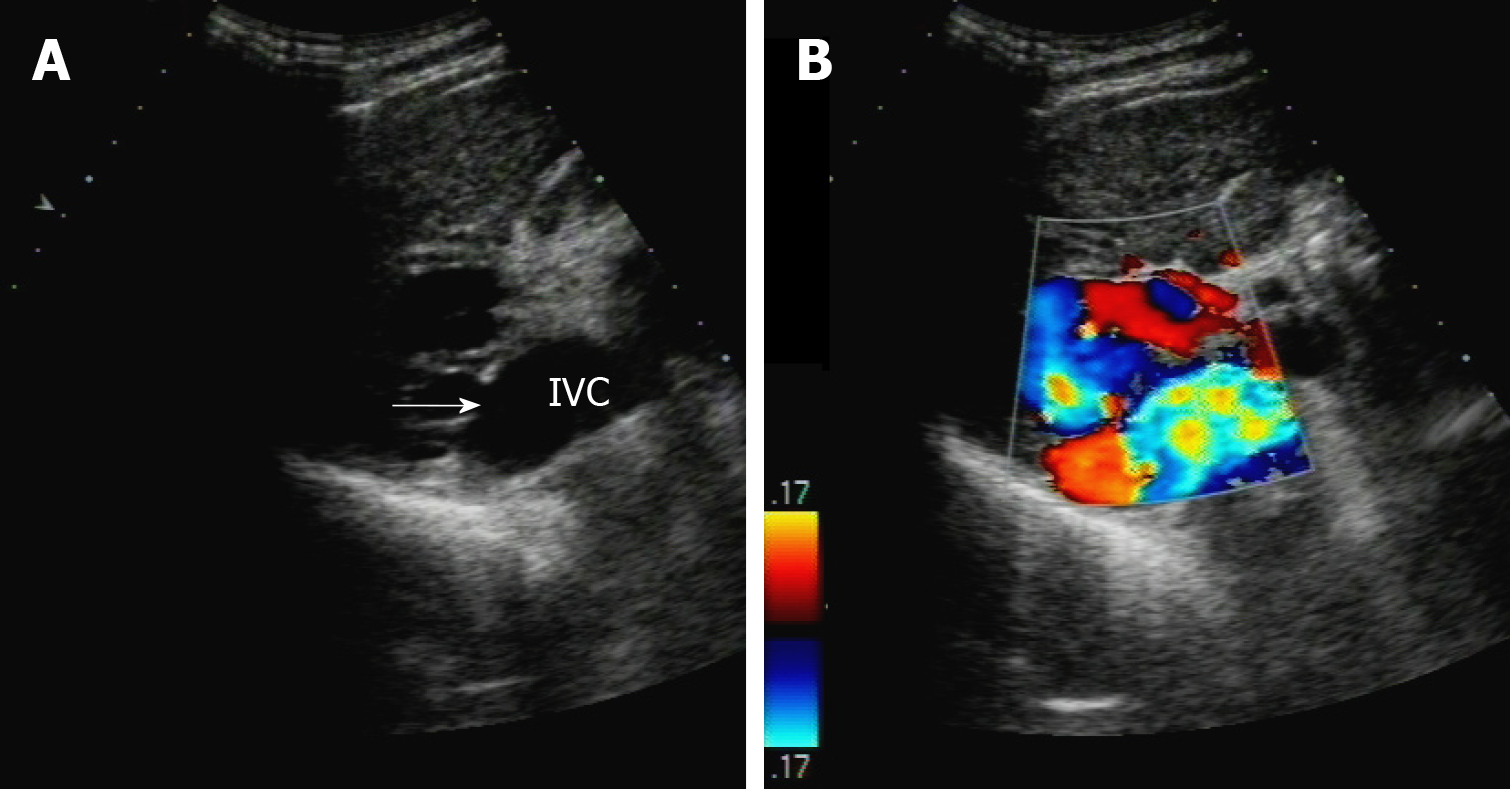 Abdomen enhanced computed tomography (CT) revealed that the left branch of the PV was thin and occluded, while the right branch of the PV was thick, showed a vermicular dilatation vein cluster, branched out, and converged into the IVC from the bare area of the lower right posterior lobe of the liver, forming a venous dilatation vein cluster in the upper pole of the right kidney (Figure 2 and 3). In addition, a vermicular dilatation vein shadow was seen in the inner wall of the lower esophagus, perineural space, and hepatic-gastric space and the splenic vein diameter was increased to 1.7 cm. A portion of the liver lobe was disordered and the hepatic fissure was widened. The spleen was enlarged and numerous liquid shadows were visible in the abdominal cavity. 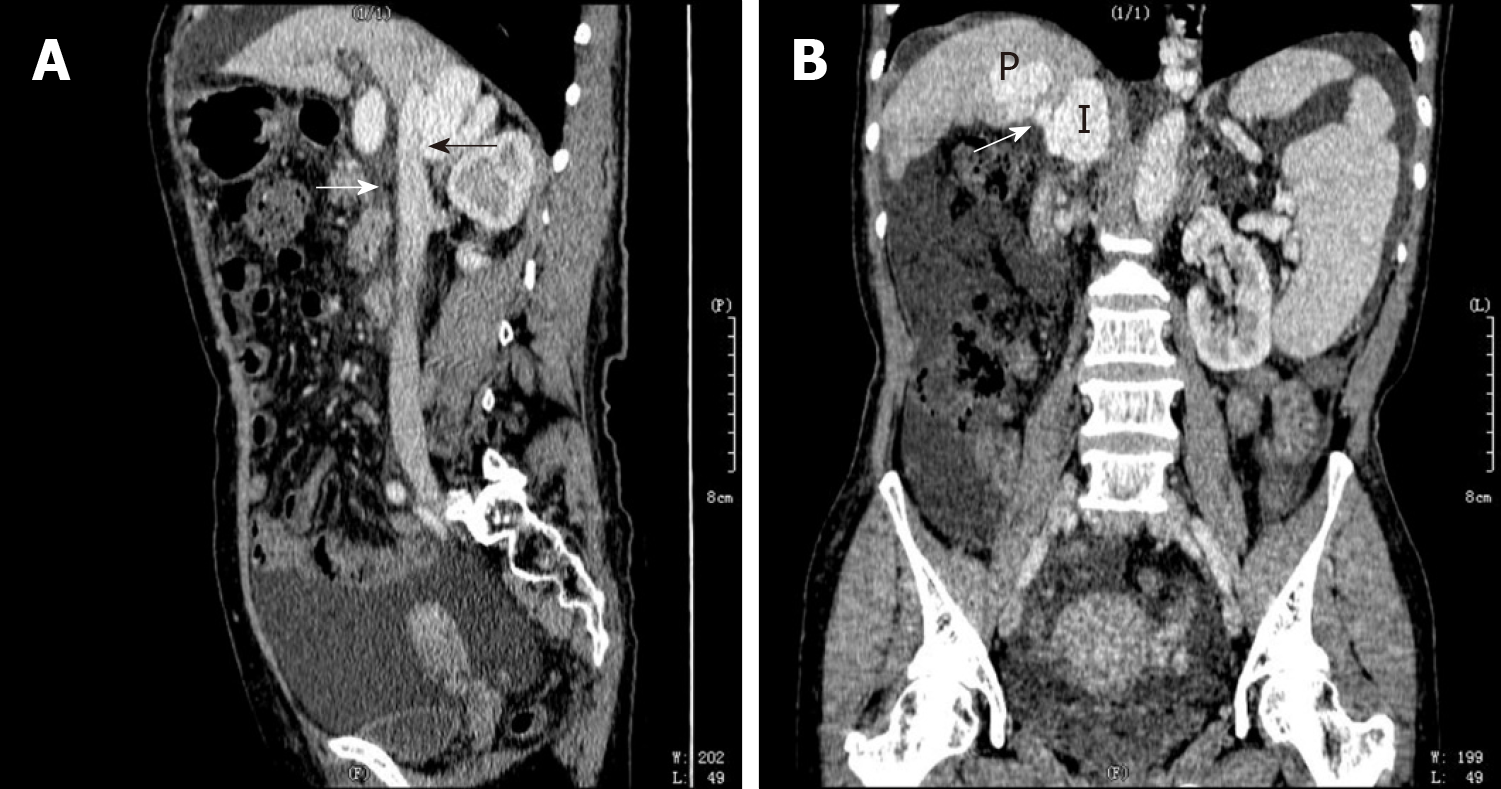 After admission, 3000 mL of ascites fluid was drained, 20 g of human ALB was intravenously infused, and 100 mg of spironolactone and 40 mg of furosemide were administered per day. One week later, the abdominal distension was relieved, her appetite improved, and she was discharged with maintenance therapy of propranolol 20 mg/d.

The portosystemic shunt is the pathway between the PV and the systemic circulation[7]. By etiology, it can be divided into congenital and spontaneous types[8] as well as intrahepatic and extrahepatic types according to anatomical location[9].

SPISS is a spontaneous venous pathway that extends from the intrahepatic venous system to the circular venous system[10]. It is mostly acquired, but a congenital type has not been identified[11]. Lalonde et al[12] reported a SPIVCS case which may be belong to the congenital type because the patient was only a 15-year-old adolescent with no evidence of liver cirrhosis or portal hypertension. There are still two types of SPISS: one in which the intrahepatic PV branch shunts to the intrahepatic vein, and another in which the intrahepatic PV shunts to the IVC through the lateral hepatic branch. The first type can occur in cases of tumors, liver trauma, or Budd-Chiari syndrome (BCS)[13,14]. The second type is very rarely discussed and refers to the right posterior branch of the PV connected with the IVC through the right posterior lobe of the liver in the right adrenal region. SPIVCS is common in cirrhosis patients with portal hypertension. Its possible anatomical basis is that the right branch of the PV communicates with the IVC through the accessory hepatic vein or the subcapsular venous plexus of the liver. Since there is no standard proper term to describe this type of shunt, we refer to it as SPIVCS.

During liver transplantation for severe hepatic encephalopathy, Vennarecci[18] found a very thick shunt between the right branch of the PV and IVC, which made the operation more difficult. The shunt vein was torn during the operation, causing a massive hemorrhage. After hemostasis was achieved, the surgical strategy was changed to hepatectomy from the left side to the right side. Therefore, the SPIVCS shunt will increase the liver transplantation difficulty. Another SPISS type, which involves the PV branches directly shunting to the intrahepatic vein, can be caused by intrahepatic tumors and trauma or occur spontaneously[19].

BCS characterized by obstructive lesions of the hepatic vein and the IVC is another cause of SPISS that is shunted to the vena cava system via the subcapsular or intrahepatic veins[14]. The use of a transjugular intrahepatic portosystemic shunt is an effective treatment for BCS-induced SPISS.

SPIVCS is a rare portosystemic shunt with a clear history of cirrhosis and portal hypertension. Clarifying the PV shunt has important clinical significance: (1) it aids the differential diagnosis of PV aneurysm and right adrenal lesion; (2) it guides clinical treatment because patients with PV shunt are more likely to suffer from hepatic encephalopathy induced by elevated blood ammonia; and (3) for patients who need surgical or other interventions such as abdominal puncture, the shunt helps the surgeon plan ahead of time.