Injuries to multiple fingertips pose a significant treatment dilemma. Numerous reconstructive options exist, all with the ultimate goal of restoring function and sensibility to the injured fingertips.

A 24-year-old male suffered injury to multiple fingertips of the right hand, resulting in exposed distal phalanges of the middle, ring, and small fingers. The amputated distal stumps were not possible for replantation. Free flap coverage was selected in order to achieve better functional outcome. The fingertip defects were covered by performing a right second toe split tibial flap using local anesthesia at the harvest site and brachial plexus nerve block for the right upper extremity. At 6-month follow-up, all three of the reconstructed fingertips had some preserved nail growth, Semmes-Weinstein Monofilaments testing was equal to the contralateral side and the Static Two-Point Discrimination were comparable to the contralateral side.

This report provides a novel reconstructive option for the management of multiple fingertip injuries and demonstrates the utility of supermicrosurgery in management of these injuries.

Core tip: Injuries to multiple fingertips pose a significant treatment dilemma. Numerous reconstructive options exist, all with the ultimate goal of restoring function and sensibility to the injured fingertips. We present a case of a split tibial flap of the second toe utilized to treat multiple fingertip injuries, resulting in satisfactory restoration of function and sensation. This report provides a novel reconstructive option for the management of multiple fingertip injuries and demonstrates the utility of supermicrosurgery in management of these injuries.

The fingertips are the most frequently injured part of the hand[1,2]. The underlying finger pulps play a vital role in functions of daily life such as sensation, fine touch, and grip perception. It is imperative to manage fingertip injuries with the goal of obtaining a painless, functional finger with protective sensation[3].

Given the complexity of fingertip injuries, successful replantation of amputated finger pulp is not always possible. Therefore, numerous surgical options have been reported for finger pulp reconstruction with good functional and sensory outcomes, such as V-Y advancement, pedicle flaps, free flaps, and toe pulp transfer[1,2,4-15].

The purpose of this report is to describe a novel reconstructive method to restore function and sensation after injury to three finger pulps by using the split second toe tibial flap.

A 24-year-old male presented to our hospital, with a shearing, crush-type injury to multiple fingertips of the right hand, resulting in exposed distal phalanges of the middle, ring, and small fingers. The amputated distal stumps were retrieved, but due to the nature of the injury, replantation was not possible.

The patient was a healthy, non-smoker, without signs of tinea pedis or unguium. A variety of reconstruction strategies were presented to the patient and his family, including stump revision amputation, V-Y flap advancement, and pedicle or free flap coverage.

After consideration of the options, the patient elected for free flap coverage in order to potentially achieve better functional recovery. 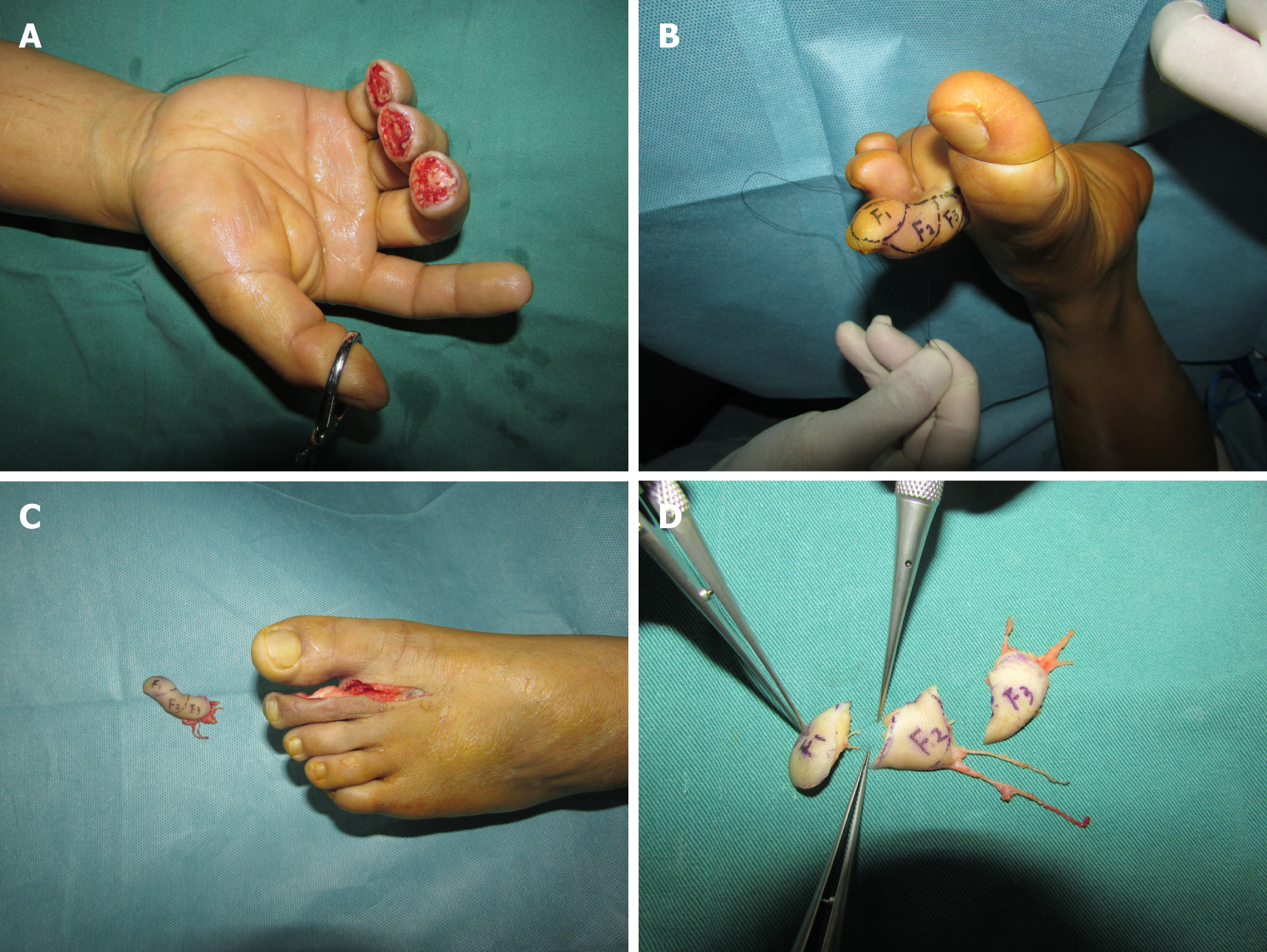 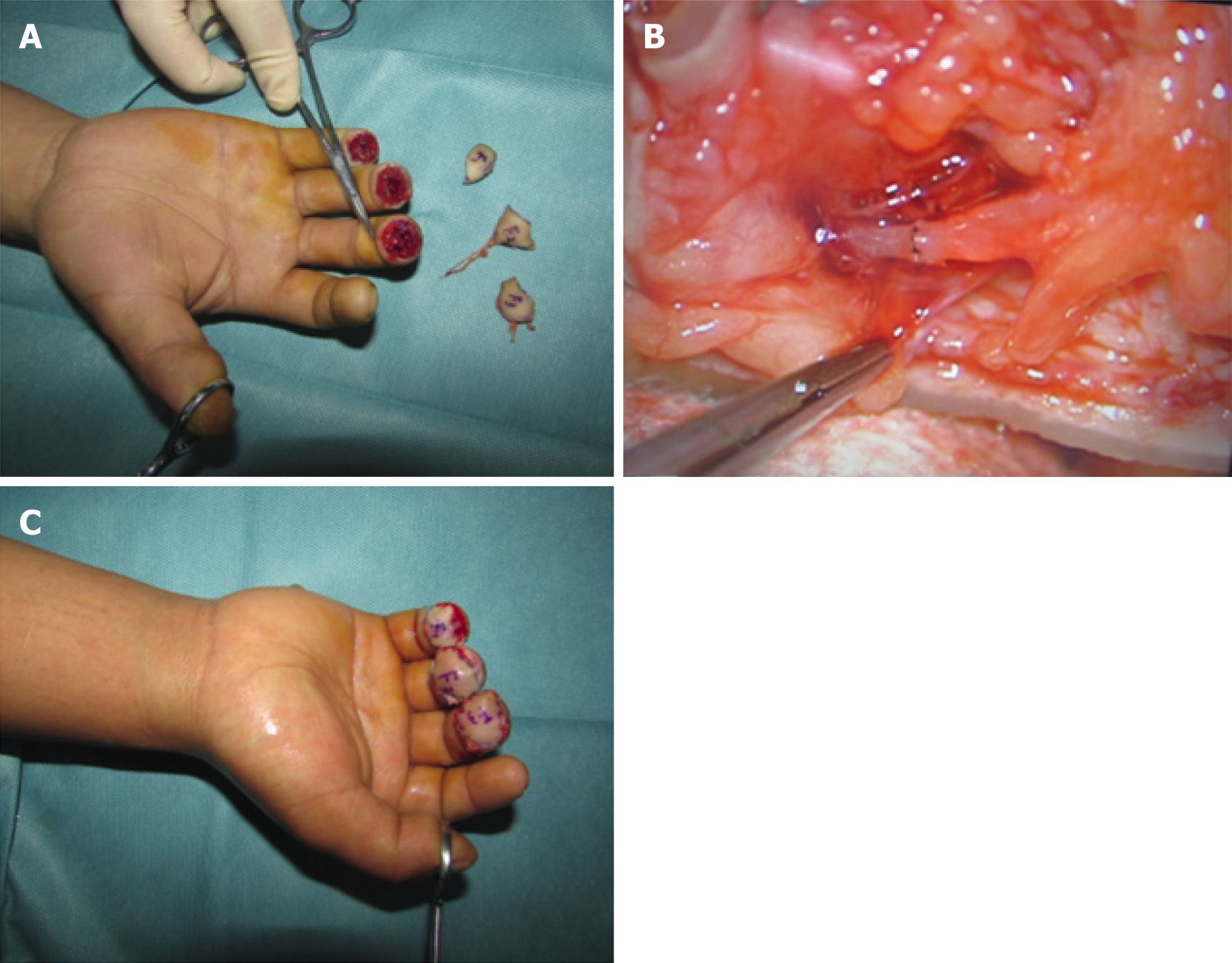 Post-operatively, Cefuroxime were administered for three days; Papaverine hydro-chloride was administered intramuscularly (30 mg, q6h→qd, day1→day 7) for seven days; and Heparin was continually administered intravenously (12500 IU every 24 h) for seven days. Blood coagulation function was monitored every two days to ensure the activated partial thromboplastin time exceeded no more than 1.5 times of the normal level. The patient remained non-weight bearing for both the right upper extremity and right lower extremity, and was discharged from the hospital without any noted complications.

Figure 3 Six months after the surgery. A: Palmar view; B: Dorsal view.
DISCUSSION

The fingertips perform unique and significant functions of daily life such as sensation, fine handling, and gripping[1,2], and they are the most frequently injured part of the hand. For these reasons, it is of vital importance to treat fingertip injuries with careful strategy to achieve pain-free, quality functional and sensory outcomes. In cases where replantation of an amputated fingertip is not feasible, numerous reconstructive options exist[2-16]. When considering the appropriate surgical technique and reconstruction options, a surgeon should deliberate on the characteristics of the injury, the advantages and disadvantages of the reconstructive method, and the potential for recovering of function, especially for cases involving multiple fingertips injuries.

This case report offers a novel reconstructive option for the management of multiple fingertip injuries. In this case, the patient had no surgical or post-operative complications, and reported no pain, cold intolerance, or functional deficits. Although the patient reported no perceived functional or sensory deficits, the s2PD measurements were decreased compared to contralateral side. These s2PD measurements were all less than 10mm and Semmes-Weinstein Monofilaments testing was equal to the contralateral side, indicating a satisfactory sensory outcome.

The concept of supermicrosurgery has found increasing clinical applications in recent years[16]. With supermicrosurgery, the dissection and anastomosis of very small caliber structures with minimal donor-site morbidity had become a reasonable option. The split tibial second toe flap utilized for this patient is an advanced application of supermicrosurgery, in which the multiple defects were covered with one single split flap. This report is noteworthy for its originality and application of super-microsurgery. Supermicrosurgery should continue to be explored and considered as a feasible option for fingertip defect reconstruction and other diseases treatment such as lymphedema, nerve repair, organ transplantation, and free flaps in the future.