We report an extremely rare case of adult colo-colonic intussusception caused by colonic anisakiasis and successfully treated by endoscopic removal of the Anisakis body. A 59-year-old man visited the emergency department due to 1 day of lower abdominal colicky pain. Abdominopelvic computed tomography (APCT) revealed the presence of mid-transverse colon intussusception without definite necrosis, which was possibly related with colorectal cancer. Because there was no evidence of necrosis at the intussusception site, a colonoscopy was performed to target the colonic lesion and obtain tissue for a histopathological diagnosis. An Anisakis body was found when inspecting the suspicious colonic lesion recorded by APCT. The Anisakis body was removed with forceps assisted by colonoscopy. The patient’s symptoms improved dramatically after removing the Anisakis. A reduced colon without any pathological findings was seen on the follow-up APCT. Without any further treatment, the patient was discharged 5 d after the endoscopy.

When colonic intussusception without necrosis occurs in an adult, physician should consider a colonoscopy to exclude causes cured by endoscopy.

Core tip: We report an extremely rare case of adult colo-colonic intussusception caused by colonic anisakiasis and successfully treated by endoscopic removal of the Anisakis body. When colonic intussusception occurs in an adult patient and there is no evidence of necrosis of the colon, it is necessary to consider a colonoscopy to exclude causes that can be cured by endoscopy.

Eating raw marine food is popular not only in Asian countries but also in Europe and the United States, which has allowed parasitic diseases, such as anisakiasis, to emerge worldwide[1-3].

Anisakiasis is a parasitic disorder that occurs after ingesting the larval stages of ascaridoid nematodes[4]. Anisakids use aquatic mammals as their definitive hosts, while humans are the incidental host after eating raw marine food infected with Anisakis third-stage larvae[4,5]. The disease of anisakiasis presents after direct penetration of larvae into the gastrointestinal wall (invasive) and/or an allergic reaction (noninvasive form)[6]. The invasive form of Anisakis larvae is usually found in the mucosa or submucosa of the gastric and small bowel walls, and causes problems, such as nausea, vomiting, hematemesis, and abdominal pain within a few hours after ingesting the larvae[6]. Colonic anisakiasis is rare, and induces symptoms that mimic other diseases, such as acute appendicitis, ileitis, diverticulitis, cholecystitis, inflammatory bowel disease, and small bowel obstruction[7-10].

We report an extremely rare case of adult colo-colonic intussusception caused by anisakiasis, which was successfully treated by a colonoscopic intervention.

He has abdominal pain for 1 day with no febrile sense.

He has no known medical history.

He had no specific personal or family history of cancer or cancer related disease.

Physical examination on admission revealed that he has upper abdominal tenderness but without rebound tenderness.

A multidisciplinary team decided on surgery to reduce the intussusception and treat the malignancy. Before the operation, a colonoscopy was done to target the unrevealed malignancy, as there was no definite necrosis around the colonic region with intussusception. During colonoscopic procedures, An approximately 3.0 cm sized Anisakis body, which had penetrated the colonic wall was seen in the transverse colon. The final diagnosis for patient was colo-colonic intussusception caused by colonic anisakiasis.

During colonoscopy, an approximately 3.0 cm sized Anisakis body, which had penetrated the colonic wall was seen in the transverse colon (Figure 2). The Anisakis body was removed with biopsy forceps and carried to the pathology department. The final tentative diagnosis was colonic Anisakis (Figure 3). 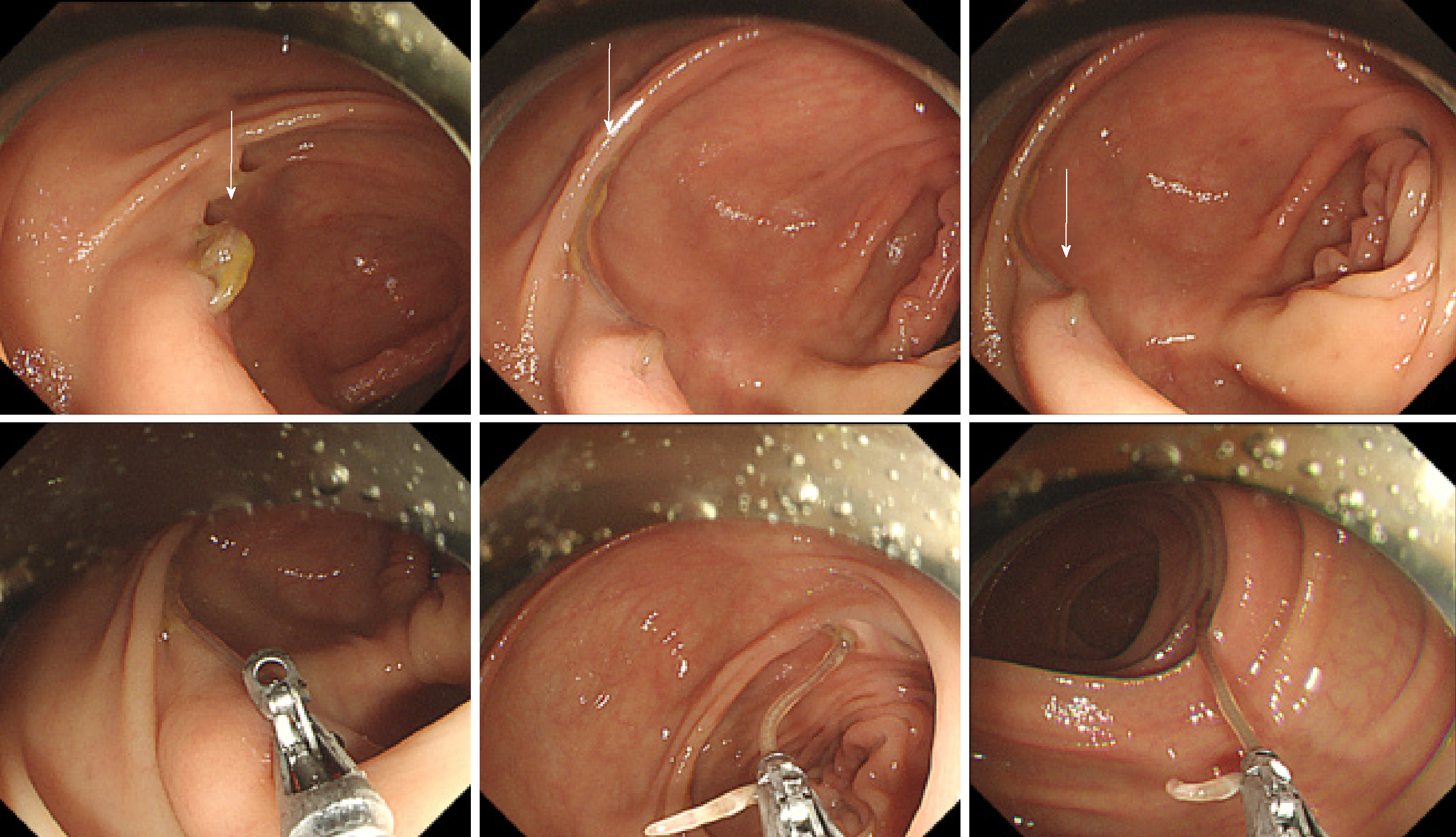 Figure 3 Histopathologic images of the Anisakis body. Histopathological findings of the specimen. A: Longitudinal section of Anisakis larva. The nematode is 2.9 cm in length and 0.1 cm in width (hematoxylin and eosin stain; × 12.5); B: High magnification showing cuticle and intestine (× 200).
OUTCOME AND FOLLOW-UP

After removing the Anisakis body by colonoscopy, the patient’s symptoms and lower abdominal pain completely resolved and did not require further intervention. A subsequent APCT showed successful reduction of the endoscopic intussusception (Figure 4). Without any further treatment, the patient was discharged 5 days after the endoscopy. After 6month follow up, all of the patient symptom and signs have been alleviated.

In this study, we report an extremely rare case of colo-colonic intussusception in an adult that occurred due to colonic Anisakis and was cured by endoscopic removal of Anisakis larvae.

The treatment of choice for anisakiasis is endoscopic removal of the nematode, and the clinical symptoms usually stop[15]. In this case, the patient’s symptoms were relieved after endoscopic removal of the Anisakis larva[15]. However, chronic cases with the evidence of the infected lesions on intestine should be considered surgical resection, and administration of tribendazole even though it is ineffective[16].

In conclusion, when colo-colonic intussusception occurs in adult patients, and without definite evidence of necrosis in the intestinal tract, a colonoscopy should be considered to exclude the cause that could be cured by endoscopy and to avoid an unnecessary surgical procedure. Further studies comparing endoscopic (or preoperative diagnostic endoscopy) and surgical procedures on long-term outcomes are needed.