Postoperative complication related to pancreatic juice leakage is a major clinical problem[1]. Pancreatic surgeries are inherently accompanied by postoperative pancreatic leakage[1,2], which readily results in intractable pancreatic fistula and subsequent intraperitoneal abscess[1,2]. This refractory complication may be fatal by inducing sepsis secondary to leakage from the digestive tract and shock hemodynamics secondary to sudden rupture of a pseudoaneurysm[3,4]. 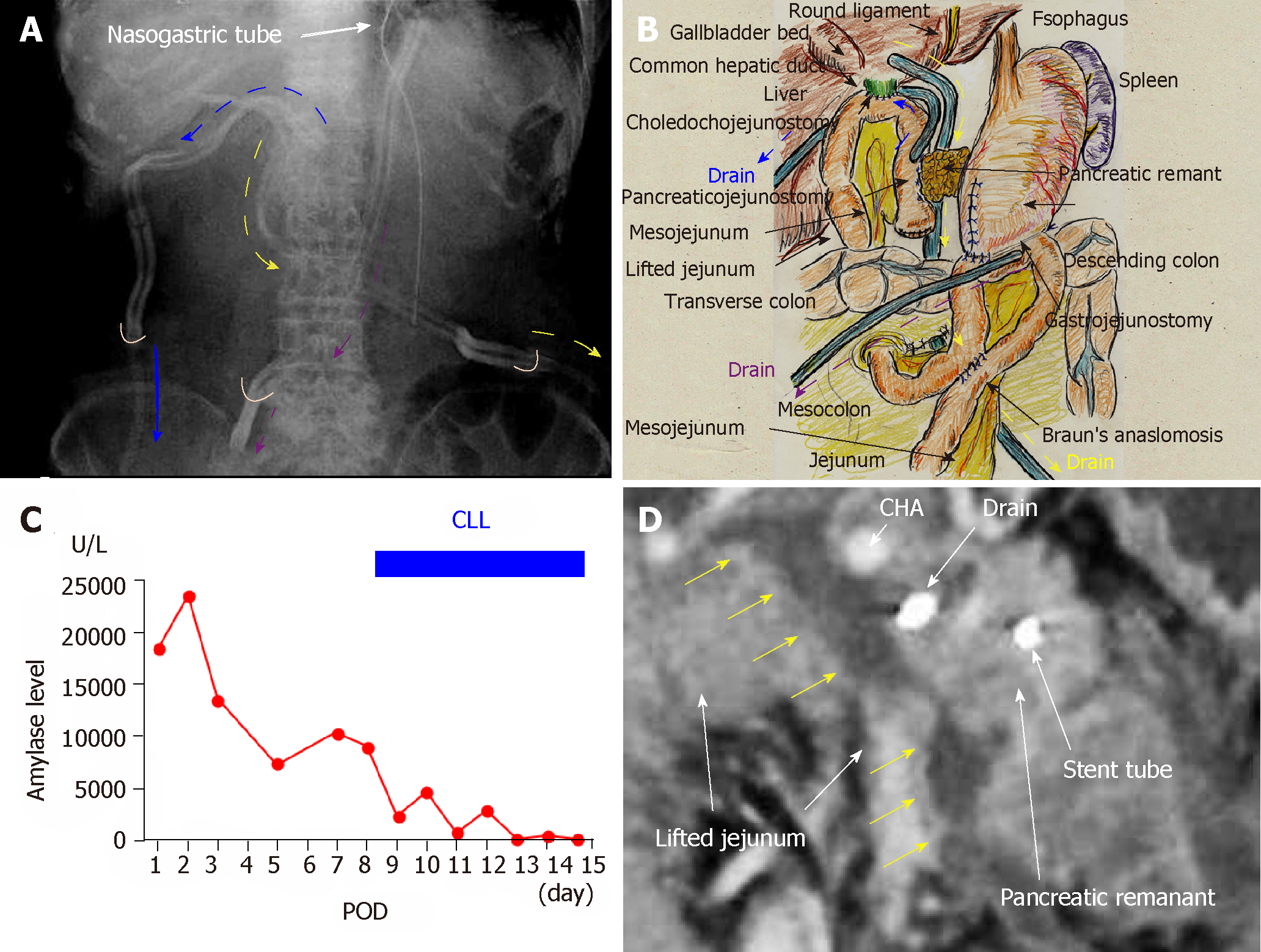 Figure 1 Case 1. A and B: We placed three drains near the anastomoses of the pancreaticojejunostomy (yellow arrows), choledochojejunostomy (blue arrows), and gastrojejunostomy (purple arrows). For the pancreaticojejunostomy, we ran two drains intentionally through the ventral and dorsal sides (yellow and blue arrows, respectively); C: Pancreatic leakage began early postoperatively, and peak amylase level in the drainage discharge was 23480 U/L. High amylase levels in the drainage discharge were still seen on postoperative day (POD) 8 continuous local lavage (CLL) was initiated on POD 8, and saline volume was increased on POD 12. We continued CLL for 7 d, and amylase levels in the drainage discharge decreased dramatically during that time; D: Contrast computed tomography on POD 8 revealed intractable pancreatic fistula had led to an intraperitoneal abscess around the pancreaticojejunostomy (yellow arrows). CHA: Common hepatic artery; CLL: Continuous local lavage; POD: Postoperative day.

Pancreatic leakage was observed early postoperatively, and the peak amylase level in the drainage discharge was 23480 U/L (Figure 1C). Although drainage discharge gradually decreased to 1 wk postoperatively, high amylase levels in the drainage discharge (8980 U/L) were still observed on postoperative day (POD) 8 (Figure 1C). Contrast CT on POD 8 revealed that intractable pancreatic fistula had resulted in an intraperitoneal abscess around the pancreaticojejunostomy (Figure 1D). Fistulography via both drains revealed an abscess cavity around the pancreaticojejunostomy. Artificial fistulas along these drains had matured as accessible pathways for drain replacement, and the abscess cavity could be lavaged by injecting saline through one drain. We replaced both drains with red vulcanized rubber tubes. Fluoroscopic examination confirmed that the recovery rate of injected contrast dye was approximately 85%, and that uncollectible dye never spread, even under high-pressure administration.

Via the ventral tube to the pancreaticojejunostomy, we irrigated 1000 mL of saline per day slowly but continuously into the abscess cavity beginning on POD 8 (Figure 2). We used the dorsal tube to the pancreaticojejunostomy only to drain irrigated saline (Figure 2). Saline volume was increased on POD 12 to 1500 mL/d because the amylase level in the drainage discharge was relatively high (2880 U/L). Thereafter, amylase level in the drainage discharge decreased dramatically (Figure 1C). Fistulography on POD 15 revealed that the abscess had resolved after 7 days of CLL. The irrigation tube was removed on POD 15 because the amylase level in the discharge was 120 U/L (Figure 1C); we removed the drainage tube on POD 17. The patient's postoperative course was categorized as Clavien–Dindo grade II[13]. He was discharged on POD 22, and no recurrence was observed as of 4.3 years after surgery. 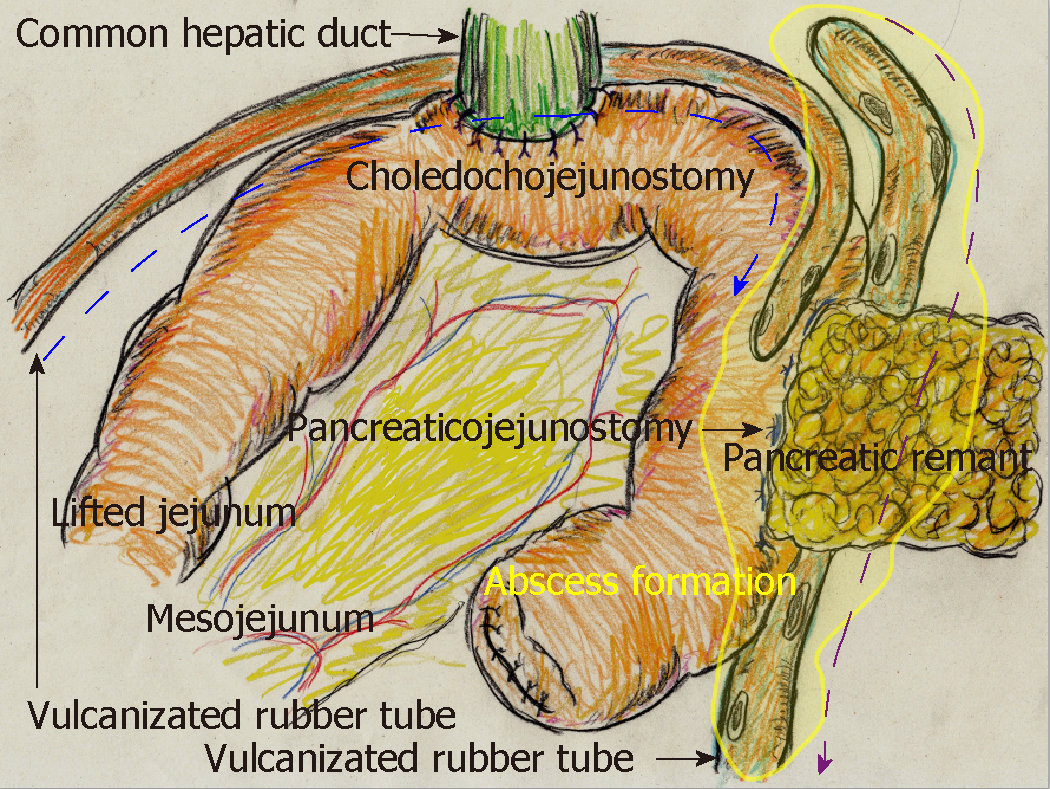 A 45-year-old man suffered refractory pancreatitis, although he had no history of alcohol abuse, and autoimmune pancreatitis was excluded. He began suffering repeat episodes of acute pancreatitis from 21 years of age, and underwent pseudocystojejunostomy at 35 years of age. Metabolic disorders (e.g., hyperlipidemia and gout) were present, but diabetes was not observed. Pancreatic stones and peripancreatic edema were seen at 42 years of age. Although stones were previously removed endoscopically, recurrent stones and peripancreatic abscess appeared in the pancreatic body and tail at 45 years of age. Collateral vessels were well-developed secondary to venous-flow occlusion related to the chronic pancreatitis, and splenomegaly was also confirmed. Therefore, we performed distal pancreatectomy and removal of the pseudocystojejunostomy. Operative time was 272 min. Blood loss was 429 mL, and transfusion of 280 mL packed red blood cells was required. Pancreatectomy was performed using a linear stapler (Endo GIA black cartridge, Reinforced Reload with Tri-Staple technology; Medtronic, Dublin, Ireland), and we placed a drain near the staple line (Figure 3A). To prevent drain dislocation, we fixed the drain to the surrounding tissue using absorbable suture (3-0 Coated Vicryl Rapide; Ethicon, Inc.). 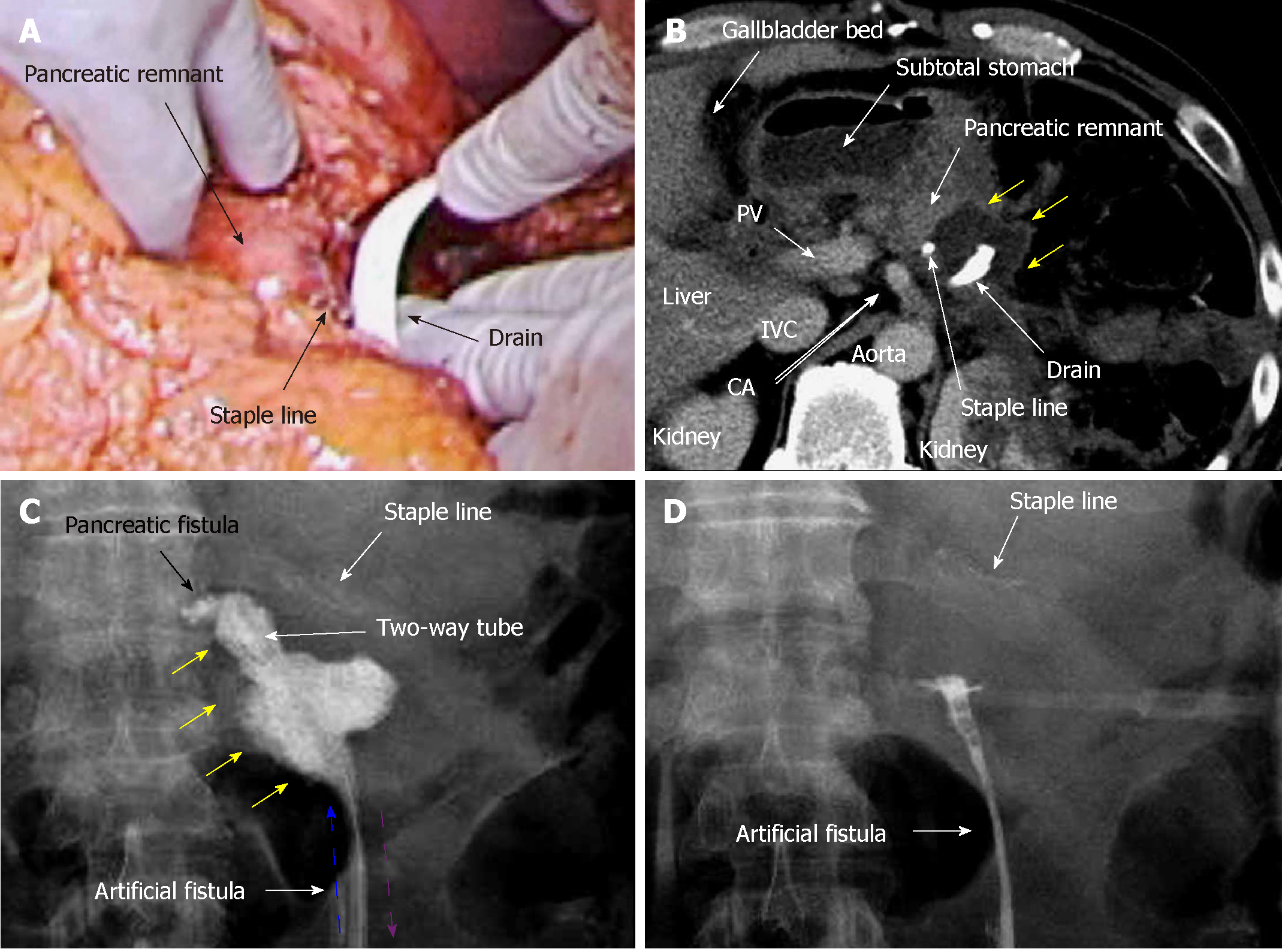 Pancreatic leakage occurred early postoperatively, and the peak amylase level in the drain discharge was 18846 U/L. Although drainage decreased gradually over 8 d, high amylase levels in the drain discharge (14469 U/L) were still present on POD 9. Contrast CT on POD 9 revealed that intractable pancreatic fistula led to intraperitoneal abscess near the staple line (Figure 3B). Fistulography via the drain on POD 9 identified the pancreatic fistula and abscess cavity (Figure 3C). The abscess cavity could be lavaged, and the recovery rate of injected contrast dye was approximately 90%; uncollectible dye never spread. Artificial fistulas along the drain had matured as accessible pathways for drain replacement, and we replaced the original drain with a two-way tube (Salem Sump, 14 Fr: Medtronic). To effectively lavage the pancreatic fistula and abscess cavity, the tip position of this two-way tube was appropriately adjusted during fluoroscopic examination (Figure 4). 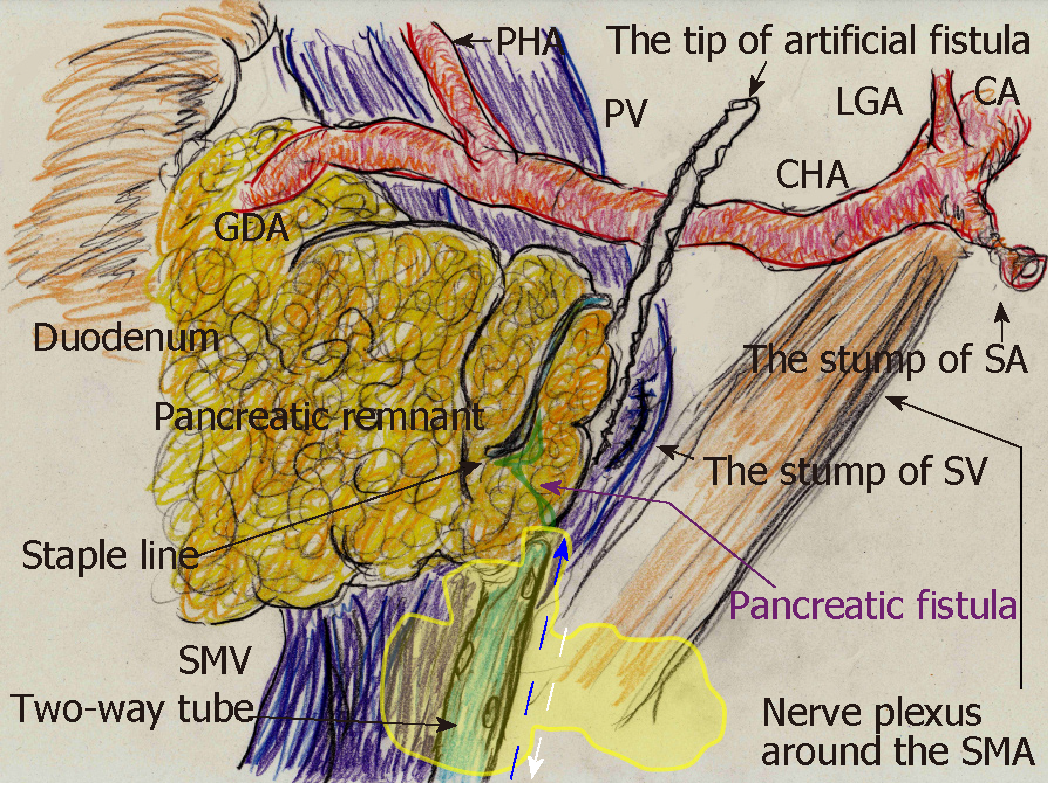 From POD 9, saline irrigation was continuously injected via the two-way tube that followed the drainage route. A total of 1000 mL of saline per day was slowly irrigated into the abscess cavity, and amylase levels in the drainage discharge decreased immediately (767 U/L). Fistulography on POD 12 revealed that the abscess had resolved after 4 d of CLL (Figure 3D), and we removed the two-way tube on POD 13. The patient's postoperative course was categorized as Clavien–Dindo grade II[13]. He was discharged on POD 18, and 3 months after surgery, no metabolic disorders were identified. 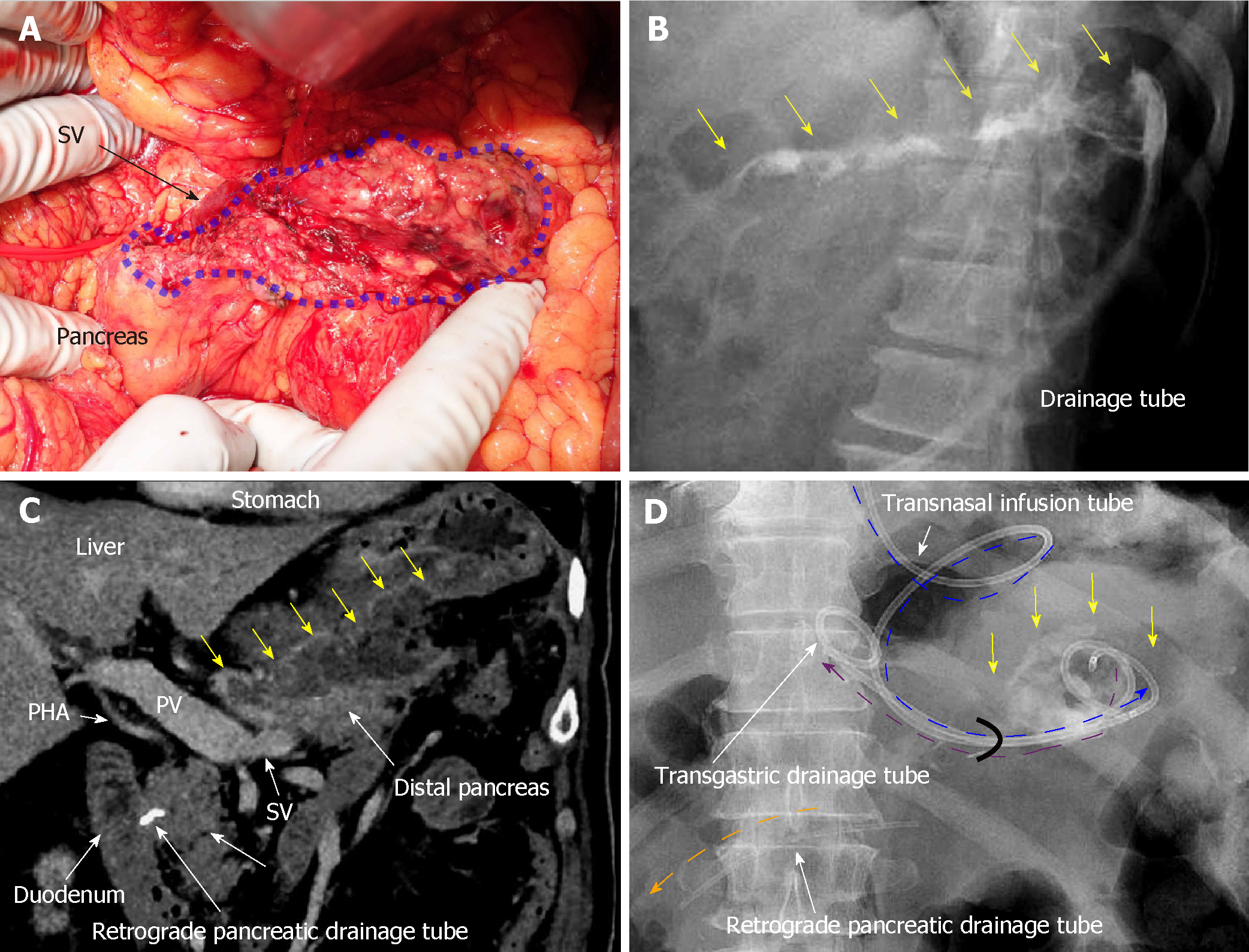 Figure 5 Case 3. A: Pancreatic parenchyma was preserved with the splenic vein, although the pancreatic parenchyma was widely exposed secondary to the aneurysmectomy (blue area); B: Optimal tube drainage (i.e., intentional placement along the distal pancreas) could not be established because of difficulty using a percutaneous approach, and intractable pancreatic fistula along the distal pancreas (yellow arrows) was seen during fistulography on postoperative day (POD) 13; C: Intractable pancreatic fistula resulted in an abscess and localized peritonitis secondary to bacterial infection, and contrast computed tomography on POD 59 revealed an intraperitoneal abscess along the distal pancreas (yellow arrows); D: A retrograde pancreatic drainage tube (orange arrow) was placed endoscopically on POD 15. On POD 63, continuous local lavage (CLL) of the abscess cavity (yellow arrow) was initiated endoscopically via the transgastric route. Transnasal infusion was initiated and transgastric drainage tubes (purple and blue arrows) were placed endoscopically. From POD 63, saline irrigation was continuously injected via the transnasal infusion tube, and amylase levels in the lavaged fluid began to decrease immediately. Fistulography on POD 70 revealed resolution of the abscess after 1 wk of CLL. CLL: Continuous local lavage; PHA: Proper hepatic artery; POD: Postoperative day; PV: Portal vein; SV: Splenic vein. 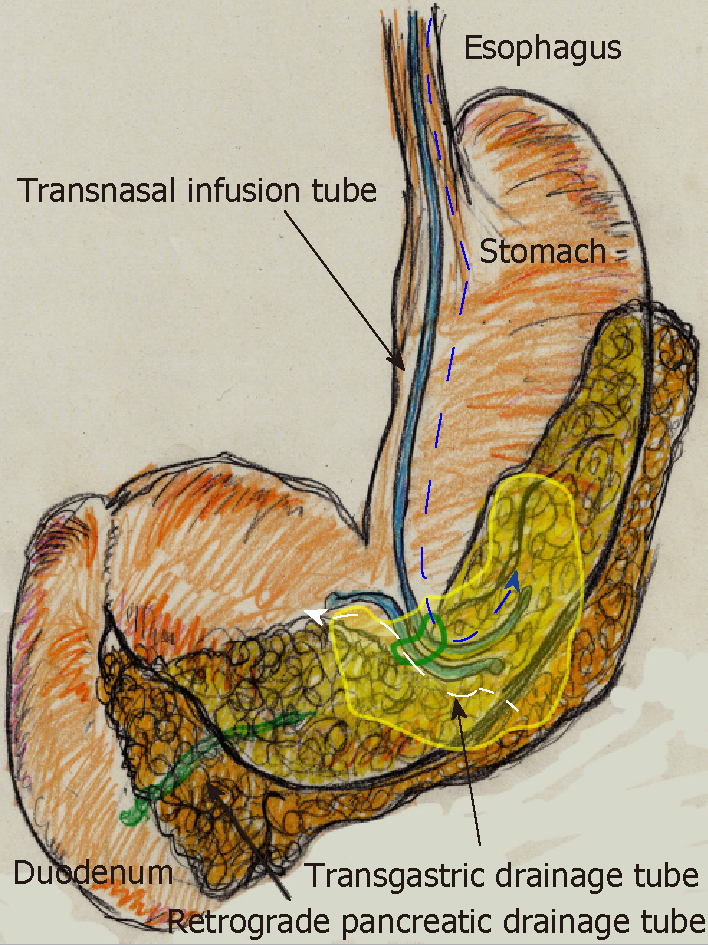 From POD 63, saline irrigation was continuously injected via the transnasal infusion tube. A total of 1000 ml of saline per day was slowly irrigated into the abscess cavity, and amylase levels in the drainage discharge decreased immediately (139 U/L). Fistulography on POD 70 revealed that the abscess resolved after 1 wk of CLL, and the refractory pancreatic fistula was no longer identifiable. Therefore, we removed the transnasal infusion and retrograde pancreatic drainage tubes. The patient was discharged on POD 72 with only the transgastric drainage tube remaining in place. His postoperative course was categorized as Clavien–Dindo grade IIIa[13], and he was in good health 9 moafter surgery.

Pancreatic fistula is sometimes inevitable complication after pancreatic surgery. Soft pancreatic parenchyma with normal consistency produces more pancreatic juice[15], even though pancreatic diseases may cause associated pancreatitis. In cases with a higher risk of pancreatic leakage, intraoperative placement of two-way tube or irrigation drainage tube may be a good solution.

Our institutional protocol for CLL for postoperative pancreatic fistula is summarized in the Table 1. Key points and pitfalls for successful CLL are as follows: (1) Maturity of the artificial fistula(s) is important. An accessible pathway is required for drain replacement; therefore, tube replacements for CLL should be delayed until sufficient maturity of the artificial fistulas has developed along the intraperitoneal drains. Red vulcanized rubber tubes are advantageous for creating artificial fistulas. Also, injected saline should never spread outward from a mature artificial fistula because extension of the abscess cavity secondary to CLL should be avoided. Therefore, we recommend high-pressure administration of contrast dye during fistulography; (2) The optimal setting is crucial for effective CLL. The abscess cavity and pancreatic fistula should be effectively lavaged, and therefore, appropriate tube placement is required. A recovery rate of injected fluid > 80% should be guaranteed; and (3) Toxic amylase levels should decrease dramatically after CLL. Amylase levels in the drainage discharge are extremely important to evaluate pancreatic leakage after surgery[22]. Amylase levels in the draining discharge within the lower triple-digits (i.e., approximately 100–500 U/L) are ideal after CLL induction. CLL generally begins with 1000 ml of saline per day. Tubes may be dislocated during CLL, and dysfunction of the sphincter of Oddi worsens pancreatic leakage[23]. CLL should be reconsidered if a saline volume > 1500 mL per day is required to decrease amylase levels in the drainage discharge; positional change in the tube location or endoscopic pancreatic drainage may be required.

Waiting until the fistulas along the intraperitoneal drains mature is important for CLL induction (Table 1). Injected contrast dye should never spread outward from the mature fistula during fistulography. We have an impression that approximately one week after surgery is required for maturity of the artificial fistula.