Primary malignant melanoma of the biliary tract (MBT) is a rare condition whose diagnosis requires excluding a primary origin in another location. This paper reviews the most important characteristics of MBT cases published in the literature and reports a new case. The patient reported here is the first case of primary malignant melanoma of the biliary tract with pulmonary metastasis treated with immunotherapy. This patient remains disease-free 36 mo after the treatment of metastatic lung lesions.

A 51-year-old man was admitted to the gastrointestinal department to study obstructive jaundice of a 1 wk clinical course. Magnetic resonance cholangiopancreatography revealed dilatation of the intrahepatic biliary tract and stenosis of the common hepatic duct. Given the suspicion of biliary tract neoplasia, cholecystectomy and resection of the common hepatic duct were performed with hepatic jejunostomy free of complications. Anatomo-pathological diagnosis was melanoma. After intervention, the patient was referred to the Department of Medical Oncology, where a primary origin was excluded in the skin, mucosa, and eyes. This confirmed diagnosis of primary biliary tract melanoma. Computed tomography was performed 12 mo after the procedure revealed several subcentimetric lung nodules. Wedge resection was performed. After confirming the diagnosis of pulmonary metastasis of primary melanoma of the biliary tract, the patient was started on immunotherapy with nivolumab. Tolerance to treatment was excellent. The patient remains disease-free 36 mo after the treatment of metastatic lung lesions.

The patient reported here is the first case of primary malignant melanoma of the biliary tract with lung metastases successfully treated with immunotherapy.

Core tip: Primary malignant melanoma of the biliary tract is a very rare entity that mainly affects men (men/women ratio 12:2) and has an average age of presentation of 47 years (range: 26-67). Cases usually present as abdominal pain and jaundice. Lesions are usually black, polypoid, and have endoluminal growth. In cases of localised disease, the treatment of choice is surgery. Mortality because of this disease was 50% after average follow-up of 37 mo (range: 4-204 mo). Here, for the first time, we describe a case of primary malignant melanoma of the biliary tract with pulmonary metastases, successfully treated with immunotherapy.

Melanoma is a malignant tumour arising from melanocytes whose origin is the neural crest[1]. This is a very aggressive neoplasia with a high capacity for remote dissemination[2]. In the last few years there has been a major increase in the incidence of this neoplasia[3,4] due to early diagnosis and overdiagnosis of benign lesions[5,6], whereby mortality remains virtually stable[4,7,8]. Its location in the mucosa is less common and associated with a delay in diagnosis2. Location in the biliary tract in the form of primary tumour is exceptional with only 13 cases reported in the literature[9-20]. Increased knowledge of molecular biology has enabled more development of treatments for this disease[2,4]. This paper reviews the most important features of primary malignant melanoma of the biliary tract (MBT) cases using the PubMed database (up to January 2019) and reports the first patient treated with immunotherapy.

A 51-year-old man with a personal history of smoking (one pack/d) and high blood pressure. The patient was admitted to the gastrointestinal department to study obstructive jaundice of a 1 wk clinical course.

Magnetic resonance cholangiopancreatography (MRC) revealed dilatation of the intrahepatic biliary tract and stenosis of the common hepatic duct. Cytological samples obtained by endoscopic retrograde cholangiopancreatography were negative for malignancy (non-representative samples). Abdominal computed tomography (CT) confirmed the findings of the MRC and was negative for distant metastasis. Given the suspicion of biliary tract neoplasia, cholecystectomy and resection of the common hepatic conduct were performed with hepatic jejunostomy free of complications. Anatomopathological examination, including the immunohistochemical study, revealed a malignant melanoma measuring 1 cm in diameter (Figure 1). A total of two adenopathies were analysed on a perichole-cystic and peri-portal level; these did not reveal metastasis. 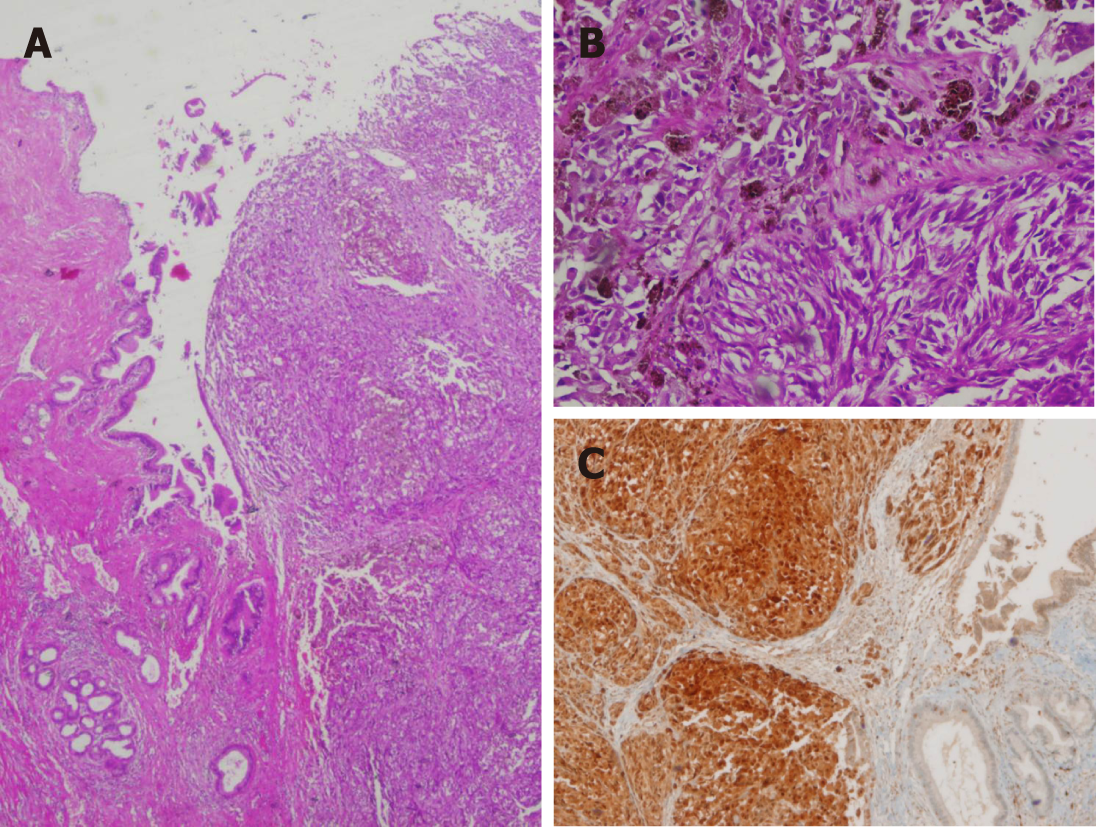 Figure 1 Primary melanoma of the biliary tract. A: The melanoma formed a polypoid mass that infiltrates the wall of the extrahepatic bile duct; B: At high magnification, some malignant melanocytes revealed finely granular cytoplasmic melanin; C: Tumour cells revealed strong immunopositivity for the HMB45 antigen.

After intervention, the patient was referred to the Department of Medical Oncology, where primary origin was excluded in the skin, mucosa, and eyes. This confirmed diagnosis of primary biliary tract melanoma.

CT performed 12 mo after the procedure revealed several subcentimetric lung nodules in the posterior and apical segments of the left upper lobe (LUL), in the anterior and superior segments of the left lower lobe (LLL), and in the posterior-basal region of the right lower lobe (RLL). These nodules revealed pathological increased uptake on positron emission tomography-CT (Figure 2). Wedge resection was performed on the LUL and LLL free of complications. Second, atypical segmentectomy was performed in the RLL. Anatomopathological study confirmed the diagnosis of lung metastasis from melanoma (positive for HMB45, vimentin, and S100 protein but negative for cytokeratin in the immunohistochemical studies). BRAF gene mutation in tumour tissue was studied by real-time polymerase chain reaction (Cobas 4800 BRAF V600 Mutation Test; Roche Diagnostics, Indianapolis, IN, United States); this proved to be negative.

Pulmonary metastasis from primary melanoma of the biliary tract.

After confirming the diagnosis of pulmonary metastasis from primary malignant melanoma of the biliary tract, the patient started treatment with intravenous nivolumab at a dose of 3 mg/kg every 2 wk.

Melanoma is considered a multifactorial disease that arises from interactions between genetic susceptibility and environmental exposure[2,4]. Ultraviolet radiation (UVR) is the most significant modifiable risk factor. Both UVA-A and UVR-B have genotoxic effects either because of generation of oxygen radicals or abnormality in the nucleotide sequence, among others[21]. Melanomas are mainly classified according to their location and relationship to solar exposure[2]. Types of melanoma that arise on the skin exposed to sun are: Melanoma with superficial extension/melanoma with low cumulative solar damage, lentigo-malignant melanoma/melanoma with significant solar damage, and desmoplastic melanoma[2]. Melanomas that arise on skin protected from the sun or free of aetiological association UVR are: spitz melanoma, acral melanoma, melanoma of mucosa, melanoma that arises in congenital naevi, melanoma that arises in blue naevus, and uveal melanoma[2]. The four most common histological subtypes of melanoma are superficial spreading melanoma, lentigo maligna melanoma, acrallentiginous melanoma, and nodular melanoma[2].

Although these are very useful classifications in clinical practice, new classifications are being developed based on genetic abnormalities, which have therapeutic indications. In general, melanoma is a tumour with a high mutational load[2,22]. Mutations are common in driver genes such as BRAF and RAS[2,23]. Those melanomas that appear in exposed areas have more abnormalities in the genes BRAF, N-RAS, and PTEN. However, it appears that those not exposed to UVR (melanoma of mucosa and acral melanoma) have a higher number of chromosomal abnormalities (amplifications and deletions) and gene amplification, essentially of CDK4 and CCND1[2,23]. Therefore, it appears that melanomas that arise in areas not exposed to radiation would have a higher mutational load, and therefore, predict a greater response to immuno-therapy[22].

The most common melanoma location is on the skin, mainly the trunk (43.5%) and the limbs (33.9%)[2,7]. Melanoma is a highly aggressive tumour that can disseminate to any part of the body, although metastases are more common in the lymph nodes, liver, lungs, and brain. Only 2% to 4% of patients present metastasis in the gastrointestinal system, mainly in the bowel, colon, and stomach[24]. There are unusual cases of solitary metastasis of melanoma to the gallbladder[25] and asymptomatic metastasis has been reported in the gallbladder and biliary tract in up to 4% to 20% of autopsies performed on patients with metastatic melanoma[26,27]. Therefore, another primary origin in the event of existence of melanoma in the biliary tract should be ruled out. Along these lines, Ricci et al[28] proposed five criteria that could provide guidance around diagnosis of primary melanoma in the biliary tract: (1) Absence of previous melanoma; (2) Absence of melanoma in other locations; (3) Single solitary lesion; (4) Polyploid or papillary form; and (5) Existence of biliary obstructive clinical symptoms.

After reviewing the literature and including this case, there are only 14 cases of MBT reported to date (Table 1). MBT is a very rare entity that mainly affects men (men/women ratio 12:2) and has an average age of presentation of 47 years (range: 26-67). The most common form of presentation is abdominal pain together with jaundice and at times a general syndrome. In cases with macroscopic data lesions were black, polyploid, and with endoluminal growth, which conditioned obstructive clinical symptoms associated with clinical presentation. Although only three patients were revealed to have metastatic disease at diagnosis, up to seven revealed remote course after the procedure. The most common site of metastatic dissemination documented was the liver, although other locations were the brain, lung, mesentery, and pelvis. In all cases of localised disease, the treatment of choice was surgery. Radical surgery was performed in those with good “performance status”; duodenopancreatectomy was the most common intervention. Only two patients were not candidates for surgery due to their general condition and/or disease extension at the time of diagnosis.

In the last few years, immunotherapy has changed the paradigms for treatment of metastatic melanoma. Currently, first-line treatment of metastatic melanoma or non-resectable wild-type BRAF is considered, which demonstrates benefits on overall survival, progression-free survival, response rates, and duration of response[29]. While most immunotherapy clinical trials only include malignant melanomas of the skin, this case exemplifies that the excellent response of malignant melanoma to this therapy is not limited exclusively to primary malignant melanomas of the skin.

Until a few years ago, malignant melanoma was considered one of the most aggressive tumours and there were hardly any effective systemic treatment options. The overall survival of a patient with metastatic melanoma was less than 1 year. However, knowledge of melanoma’s molecular biology has meant a spectacular change in regard to treatment and survival of melanoma patients. Contrary to what was believed, a greater mutational load has been revealed in those melanomas that appear in sites not exposed to UV[2]. This has meant a greater efficacy of immunotherapy[30]. Here, for the first time, we describe a case of primary biliary malignant melanoma with pulmonary metastases, successfully treated with immunotherapy.

nformed consent statement: Informed written consent was obtained from the patient for publication of this report and any accompanying images.