Gastric duplication cysts (GDCs) are a relatively uncommon congenital developmental abnormality, mainly occurring in infants but very rarely in adults. Because of the variability in clinical presentation, it is often quite challenging to diagnose GDCs in adults. We are presenting a case report of an adult diagnosed operatively as having a GDC with a literature review to summarize clinical and imaging features and the treatment selections of GDCs in adults so that doctors could have a comprehensive understanding of this disease and make a precise diagnosis and a suitable therapeutic decision for patients.

A 51-year-old man presented with recurrent epigastric pain and fullness for two years. No significant findings were noted during physical examination and routine blood tests were unremarkable. An abdominal ultrasound revealed a large cyst in the upper left abdominal quadrant. A following contrast-enhanced abdominal computed tomography (CT) scan demonstrated a hypodense cystic lesion between the spleen and stomach. The lesion had scattered calcification in the cyst wall without any significant enhancement. The lesion was initially thought to be a cystic lymphangioma. The patient underwent a surgical resection and intraoperatively it was noted that the lesion was closely adherent to the greater curvature of the stomach. Subsequently, a resection of the gastric mass along with a partial gastrectomy was performed. The patient recovered quickly with a complete symptomatic relief and did not show any further complications during the 8-month follow-up.

GDCs are quite rare in adults, with a multitude of symptoms, which is quite challenging for precise diagnosis before histological examination. Some imaging techniques involving CT, magnetic resonance imaging, and endoscopic ultrasound could provide valuable morphological features for differential diagnosis.

Core tip: We are presenting a rare case of a duplication cyst in an adult complaining of recurrent upper left abdominal pain and fullness. An abdominal ultrasound and a contrast-enhanced computed tomography scan demonstrated a large cystic lesion along the greater curvature of the stomach with scattered calcification and no significant enhancement was observed. A nutrient vessel arising from the stomach was noted in the cyst wall. Laparoscopic resection of the gastric mass and partial gastrectomy were performed. The patient recovered without any complications.

A 51-year-old man was admitted to our hospital because of a two-year history of repeated episodes of epigastric pain and fullness without any obvious causes.

Two years ago, the patient began to present recurrent upper abdominal pain. The recurrent episodes of pain lasted approximately 1 h and were associated with nausea.

The patient denied any past surgical interventions.

An abdominal ultrasound showed a large cystic lesion in the upper left quadrant abdomen, which was initially thought to be retroperitoneal (Figure 1A). No significant vascular flow was seen on Doppler (Figure 1B).

Figure 1 Ultrasound images of the gastric duplication cyst. A large cystic focus (blue arrow) was visible in the space between the spleen, stomach, and left kidney, with no vascularization on Doppler.

A contrast-enhanced abdominal computed tomography (CT) scan was performed for further evaluation (Figure 2). The scan showed a large cystic hypodense lesion, measuring 95 mm × 61 mm × 66 mm, between the spleen and stomach, which was anterior to the left renal fascia and in close proximity to lateral limb of the left adrenal gland. The lesion was lobulated and well-circumscribed with a small amount of wall calcification. 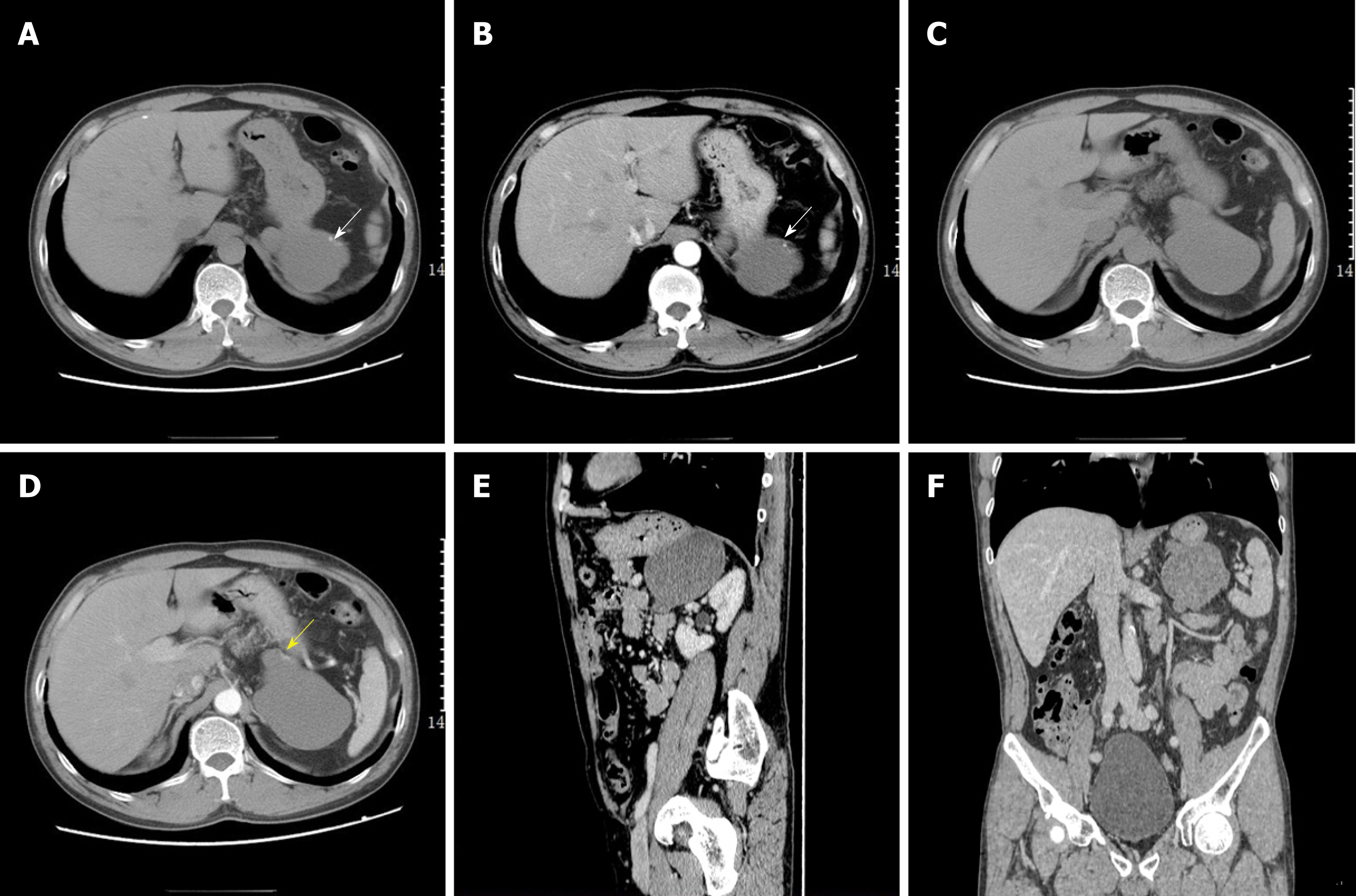 Figure 2 Contrast-enhanced computed tomography images of the gastric duplication cyst. A-F: A large cystic hypodense focus was along the greater curvature of the stomach, measuring 95 mm × 61 mm × 66 mm; A and B: The focus was lobulated and well-circumscribed with a small amount of calcification on its wall (white arrow); C and D: A nutrient vessel from the stomach on the cyst wall was observed on arterial phase images (yellow arrow).
Primary diagnosis

A cystic lymphangioma was the primary diagnostic consideration prior to pathological confirmation according to the imaging examination.

Considering recurrent abdominal pain and the imaging findings of an abdominal mass, the patient needed to take surgical treatment into consideration for sympto-matic relief.

The patient chose surgical intervention for symptomatic relief. During the surgery, it was noted that the lesion was adherent to the greater curvature of the proximal stomach, between the superoposterior aspect of the pancreas and splenic hilum. A laparoscopic resection of the perigastric mass and partial gastrectomy were performed.

Histological sections showed gastric mucosa-like tissues within the cyst wall and a diagnosis of GDC was made for the patient (Figure 3). 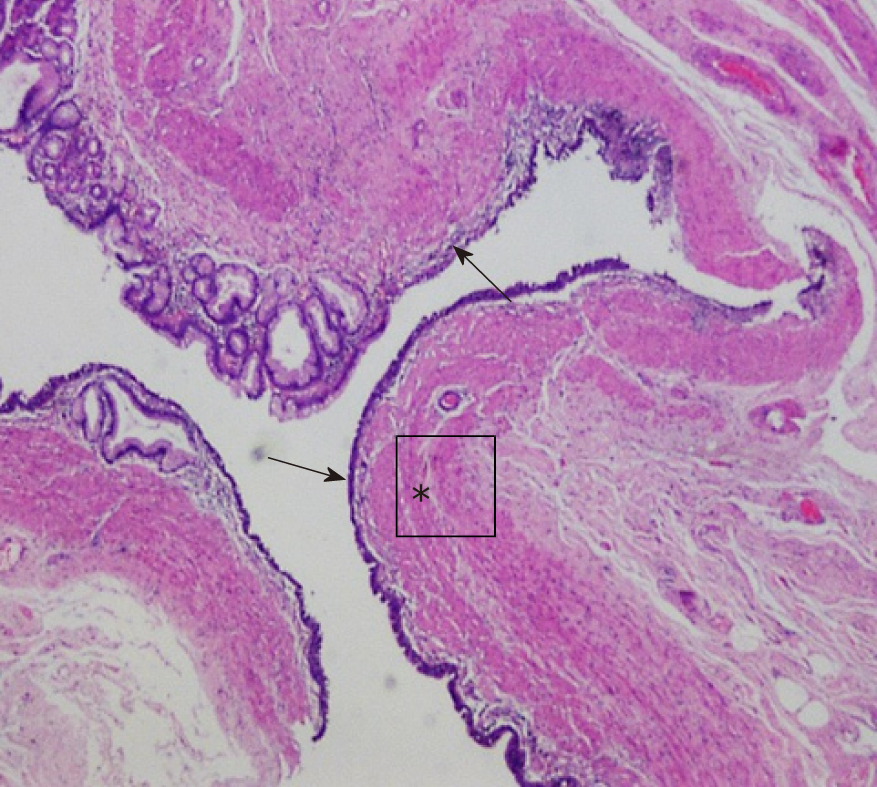 Figure 3 Photomicrograph (hematoxylin and eosin staining, original magnification, ×4) of the surgical specimen demonstrates an inner mucosal layer (arrows) within the cystic mass, along with a continuous muscular layer (asterisk) shared with the stomach.
OUTCOME AND FOLLOW-UP

The patient recovered quickly after the surgery without any postoperative complications. There were no recurrent symptoms during his 8-month outpatient follow-up.

GDCs are a class of gastrointestinal tract duplications, most commonly occurring in children and very rarely in adults. GDCs have no specific clinical symptoms in adults and the symptoms mainly depend on the lesion location, size, and whether any communication exists with the gastric lumen. Clinical symptoms include nausea, vomiting, abdominal pain, palpable abdominal mass, gastrointestinal bleeding (from ulceration related to ectopic gastric mucosal acid secretion), weight loss, anemia, and failure to thrive[1,6-10]. Some cases are asymptomatic and only incidentally detected during physical examination[7] (Table 1). GDCs can produce all the pathological changes that may occur in the normal gastric lining, including gastritis, gastric ulcer, and even malignant transformation[11,12]. To date, less than 15 cases of malignant transformation arising from GDCs have been reported[7,12-14]. In rare cases, GDCs have been reported to contain ectopic pancreatic tissue[15,16]. Pancreatitis can occur in these cases if the ectopic pancreatic duct is obstructed[16,17]. Laboratory tests in GDCs tend to be unremarkable. Rarely, some cases have abnormally elevated carcinoembryonic antigen (CEA) and CA 19-9[18,19]. These cases may be associated with malignant transformation of GDCs.

The mechanism of GDCs is still unclear but several theories have been proposed to explain the formation of gastrointestinal duplications. Some scholars theorize that gastrointestinal duplications share a similar mechanism with that of diverticulum formations and some believe they are caused by the abnormal development of early embryonic primitive foregut formation and differentiation[1,2,7].

CT and magnetic resonance imaging (MRI) are valuable for determining the size, location, and extent of the duplication cyst as well as the relationship to adjacent structures[1,20]. GDCs may be round or lobulated with a thin wall on cross-sectional images[7]. When the duplication cyst is very large and in close proximity to adjacent organs such as the spleen, kidney, or liver, it may be misdiagnosed as a cyst arising from these organs. MRI has high soft tissue resolution and signal changes in multiple phases may present the thin cyst wall usually with slight enhancement, which is useful for distinguishing the origin of the cyst[6]. In our case, no enhanced cystic wall was observed by enhanced CT, but a nutrient vessel arising from the stomach was seen in the cyst wall, which was a helpful imaging feature to identify the origin of the cystic lesion. GDCs occasionally present calcification within the cyst wall, which may be related to the accumulation of secretion or necrosis. Multiple calcifications in the cyst wall were observed in our case and the case reported by D'Journo et al[21]. Awan et al[22] introduced a special case with multiple calcifications mimicking a staghorn calculus. The contents of most GDCs present fluid density/signal, but bleeding or infection may result in the heterogeneity of density/signal, which can make diagnosis of GDCs in adults complicated[4]. GDCs also need to be distinguished from gastrointestinal stromal tumors (GISTs). GISTs are solid tumors originating from the submucous mesenchymal tissue of the gastrointestinal wall, and vary greatly in size with hemorrhage and necrosis occurring in large tumors and mild or moderate enhancement involving the solid portions of GISTs.

Ultrasound is a noninvasive method widely used for screening in patients with abdominal symptoms. In most cases, ultrasound shows a hypoechoic cystic lesion in the upper abdomen, often adjacent to the stomach, pancreas, and liver.

Endoscopic ultrasound (EUS) is considered a good diagnostic tool for the detection of GDCs because it can show the internal hyperechoic mucosal layer and the hypoechoic smooth muscle layer of the cyst[21]. In recent years, EUS-guided fine-needle aspiration (EUS-FNA) plays an important role in clinical diagnosis of GDCs[5].

On pathology, a GDC must have both a smooth muscle layer and a mucosal epithelial layer (gastrointestinal, gastric, or respiratory mucosa) in the cyst wall[7,14]. Our case had all the layers meeting the diagnostic requirements.

Up to now, there are no well-recognized international guidelines on the treatment of this disease. Several treatment methods have been reported in the literature, including enucleation, formation of cystogastrostomy, and even endoscopic removal[3]. Surgical excision is usually considered the mainstay of treatment for GDCs. Surgical resection is performed not only for the consideration of symptomatic relief and the prevention of potential complications caused by GDCs such as obstruction, torsion, perforation, bleeding, but also for the risk of malignant transformation in GDCs[3,7]. We performed a review of the English papers about GDCs in the past 17 years on PubMed and found that the majority of those cases had a good prognosis with complete symptomatic relief after surgical resection while only a few cases with malignant transformation developed recurrence or metastasis[11,12,14,23-25].

GDCs are a quite rare malformation in adults usually with non-specific clinical symptoms. Some imaging modalities including ultrasound, CT, and MRI are able to figure out morphological features for GDCs diagnosis and EUS could present the exact micro-structure of the cystic wall. We deem that GDCs should be put in the differential list for a cystic mass adjacent to gastric lumen.