Adrenocortical cancer (ACC) is an infrequent and often aggressive malignancy with a very poor prognosis. It can be classified as functional or nonfunctional. Nonfunctional ACC is hampered by the absence of specific signs or symptoms; only abdominal pain with or without incidental adrenal occupation is typically present.

We report a rare case of a patient with a 30 cm × 15 cm × 8 cm ectopic ACC on the anterior abdominal wall without organ adhesion. A 77-year-old male was admitted to our hospital because of a huge abdominal mass, which, by ultrasonography, had an unclear border with the liver. Computed tomography showed that the mass was not associated with any organ but was adherent to the anterior abdominal wall. The patient underwent tumor resection, and a postoperative pathology examination showed a neuroendocrine tumor, which was diagnosed as ACC. The patient was disease-free at the 9-mo follow up.

The anterior abdominal wall is a rare site of ACC growth.

Core tip: Aberrant adrenal tissue can be found anywhere, but typically in the testes, ovaries, spermatic cord, and kidneys. The most common site is retroperitoneal fat near the adrenal gland; the bilateral lungs, liver, spleen, pancreas, colon, duodenum, and ovary are less common. This is, to our knowledge, the first report of adrenocortical cancer on the anterior abdominal wall in the English-language literature.

Adrenocortical cancer (ACC) is an infrequent and often aggressive malignancy with a very poor prognosis. According to the Surveillance, Epidemiology and End Results database, ACC has an annual incidence of 0.7-2 per million population[1] and a bimodal age distribution with peaks before 5 years of age and at 40-60 years of age[2].

ACC can be classified as functional or nonfunctional. The early diagnosis and treatment of nonfunctional ACC is hampered by the absence of specific signs or symptoms; only abdominal pain with or without incidental adrenal occupation is typically present. Based on its cost-effectiveness, the American Association of Clinical Endocrinologists guidelines recommend surgery for nonfunctional ACC lesions ≥ 4 cm in diameter[3]. Here, we report the case of a patient with ACC on the abdominal wall. The patient underwent tumor resection and was disease-free at the 9-mo follow up.

A 77-year-old male (body mass index, 24.5 kg/m2), who 9 mo previously had been admitted to our hepatological surgery department, presented with an enormous exogenous liver occupation that had been detected by ultrasonography in a community hospital 2 d prior. He denied having abdominal pain, nausea, anorexia, or changes in bowel habit.

The patient had no clinical symptoms associated with steroid excess, except for hypertension. He was admitted to our department for diagnosis.

The patient had suffered from hypertension for 40 years but did not have diabetes or cardiovascular disease.

His medical history and family history were unremarkable.

The results of a physical examination were unremarkable, except for a palpable hard mass and slight tenderness in the hepatic region.

Ultrasonography revealed an enormous space-occupying lesion in the right upper abdomen, in which Color Doppler flow imaging showed a small amount of blood flow (Figure 1A). A left-hepatic origin was considered, but contrast-enhanced computed tomography (CT) showed an irregular fat-containing mass in the right upper abdominal cavity of uneven density with an obscure boundary (Figure 1B). The tumor exhibited heterogeneous enhancement in the arterial phase (Figure 1C) and delayed enhancement in the venous phase (Figure 1D). 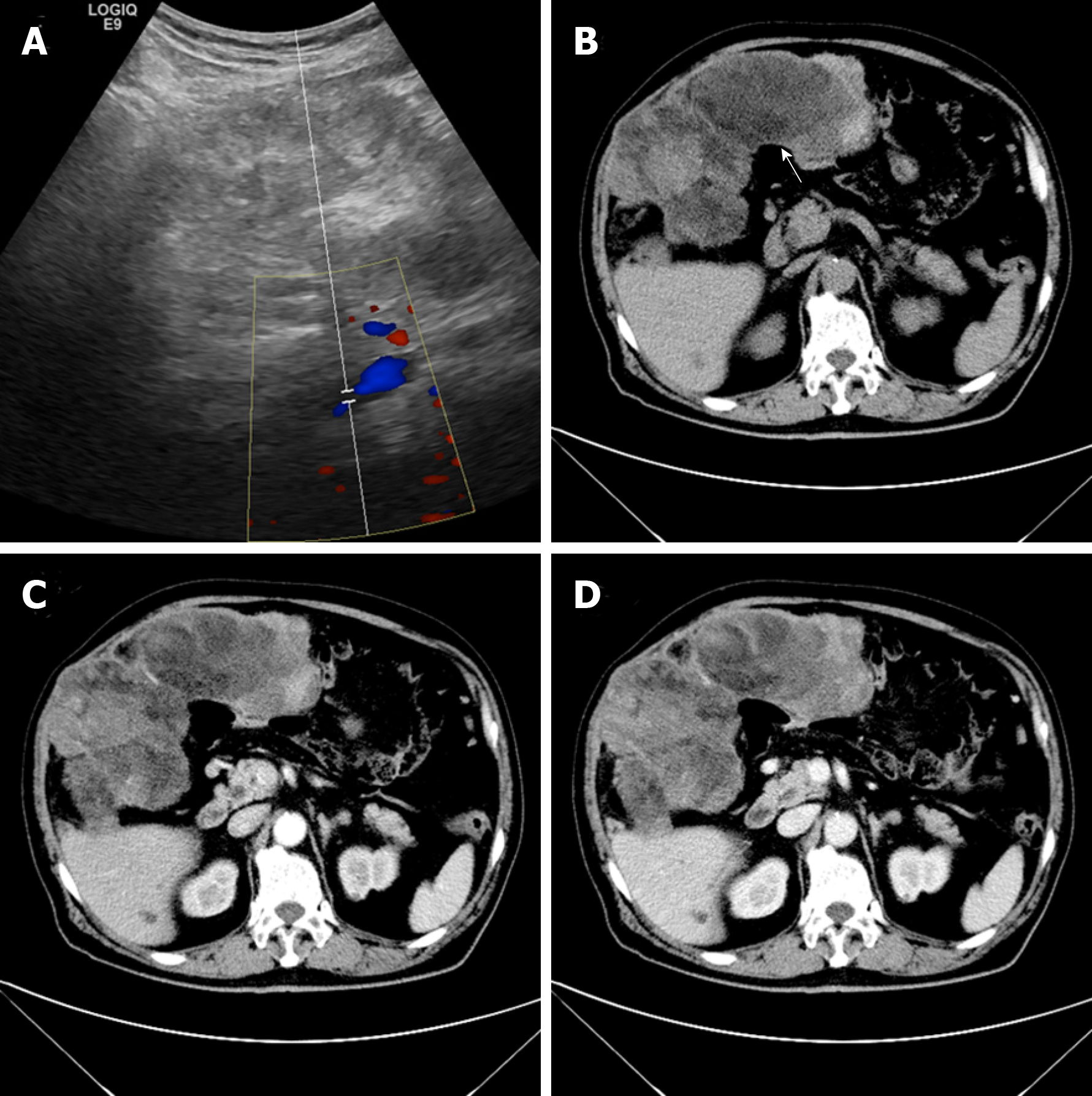 A laparotomy was performed. During surgery, a 30 cm × 15 cm × 8 cm tumor was found above the hepatic curvature of the colon in front of the right posterior peritoneum (Figure 2). The liver, pancreas, stomach, colon, and adrenal gland were not infringed, and there was no lymph-node metastasis. The tumor had invaded the local right-abdominal musculature.

A postoperative pathology examination indicated that the tumor was hypo-differentiated carcinoma with neuroendocrinalization and so was considered to be ACC. A histopathology examination showed a Weiss score of 6, as cells were distributed in sheets and wide bands, and extensive necrosis was present. The cytoplasm was eosinophilic, the karyotype was irregular, and giant neoplastic cells were present (Figure 3A). The Ki-67 labeling index was > 80% (Figure 3B), and the tumor cells were positive for melan A, vimentin, synaptophysin (Figure 3C-E), CK20, insulin-like growth factor-2 (IGF-2), and EMA; and negative for CK (pan), inhibin a, CgA, and S-100. 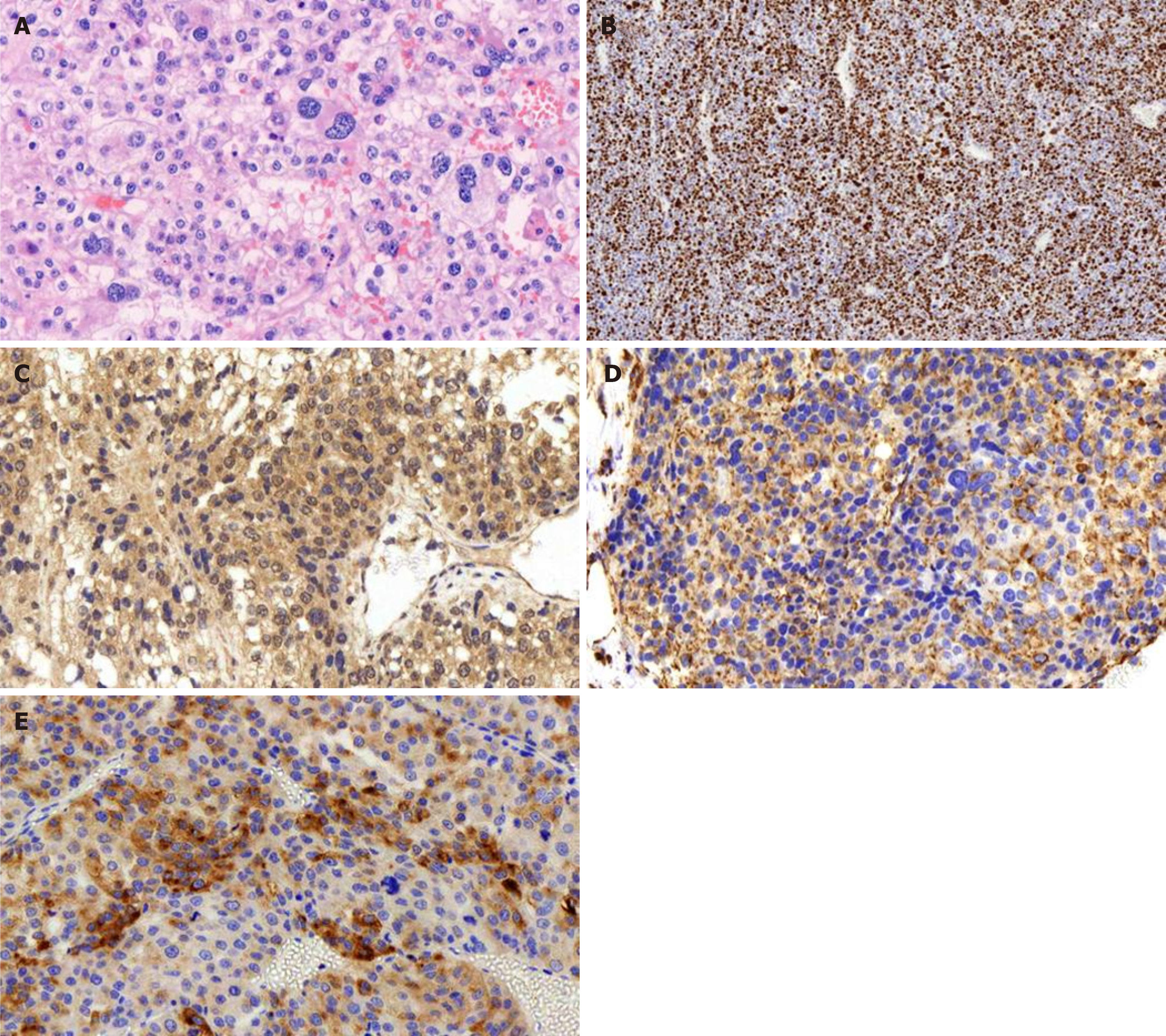 The patient underwent regular follow ups involving a physical examination, laboratory testing, and X-ray and CT imaging. He was disease-free at the 9-mo follow up.

ACC is a rare malignancy, accounting for about 0.05%-0.2% of all malignant tumors, and has an annual incidence of 1–2 per million[4]. Ectopic adrenal tissue is commonly found in infants and children, but it is less common in adults[5]. ACC is the second most aggressive malignant endocrine tumor after anaplastic thyroid cancer[6]. Aberrant adrenal tissue can be found anywhere, but typically in the testes, ovaries, spermatic cord, and kidneys[6]. The most common site is retroperitoneal fat near the adrenal gland[7,8]; the bilateral lungs[9], liver[7], spleen[8], pancreas[8], colon[8], duodenum[8], and ovary[6] are less common. This is, to our knowledge, the first report of ACC on the anterior abdominal wall in the English-language literature.

The clinical symptoms of primary ACC are dependent on the functional state and volume of the tumor. Around half of patients with ACC are asymptomatic or have symptoms caused by mechanical effects of tumor growth[2], such as abdominal pain, nausea, poor appetite, and back pain[1]. The other half of patients with ACC have symptoms related to elevated levels of steroid hormones-Cushing syndrome, Con syndrome, and feminization. ACC lesions are typically large as they grow rapidly; most are 10-13 cm in diameter, 9%-14% are < 6 cm, and 3% are < 4 cm[1,10,11]. Generally, nonfunctional ACC lesions are small; large nonfunctional ACC lesions are very rare[12].

The pathogenesis of ACC is unclear but is likely to involve IGF-2, tumor protein 53, and β-catenin. ACC can be diagnosed with 100% specificity and 96% sensitivity based on the levels of IGF-2 and Ki-67[13].

Complete surgical resection is the only potentially curative therapy for ACC; And it is equally important to choose surgical indications according to the latest guidelines for the surgeon[14]. Indeed, complete resection is the most accurate predictor of the outcome. Paton et al[11] reported that patients who have complete resection have a higher 5-year survival rate than those who have incomplete resection. In the retrospective study of Terzolo et al[15], use of mitotane as adjunct therapy reduced the rates of recurrence and mortality, as did etoposide, doxorubicin and cisplatin plus mitotane, streptozotocin plus mitotane, and gemcitabine plus capecitabine[1,16].

The 5-year overall survival rate of patients with ACC is 37%-47%[1]. For advanced ACC, (i.e., stage III tumor), the mENS@T TNM classification - which comprises the “GRAF” components: grade (G), resection status (R), age (A), and functioning symptoms at diagnosis (defined as tumor or hormone-related symptoms) (F) - is recommended[17]. Rupture of the tumor capsule, metastasis, and a high Ki67 index are associated with reduced disease-free and overall survival.

ACC is rare and has a poor prognosis. The 5-year overall survival rate of patients with ACC is 37%-47%, and resection is the optimum treatment modality. We describe a case of a patient with ectopic adrenocortical carcinoma on the anterior abdominal wall and our patient was disease-free at 9 mo after resection of the tumor.