The patient was a 43-year-old man who was complained of a mass in the left inguinal area and was performed open biopsy. ALK+ ALCL was diagnosed pathologically. Computed tomography scan demonstrated multiple lymph node lesions in the abdomen - pelvis/inguinal region, and scattered nodular lesions in both lung fields. He did not complain of gastrointestinal symptoms. While, esophagogastroduodenoscopy identified MLP lesions from the antrum of the stomach to the descending portion of the duodenum and mild thickened folds on the corpus of the stomach, and biopsy showed invasion of ALK+ ALCL. We treated this patient with six cycles of CHOEP (Cyclophosphamide, Doxorubicin, Vincristine, Etoposide, and Prednisone) chemotherapy. At the conclusion of treatment, there was complete remission. Numerous white scars were found on the stomach, endoscopically consistent with a remission image of lymphoma. The endoscopic features of this case were thought to be similar to those of MCL.

The macroscopic/endoscopic features of gastrointestinal ALK+ ALCL may be more similar to those of B-cell lymphomas rather than T-cell lymphomas.

Anaplastic large cell lymphoma (ALCL) was first described in 1985 by Stein et al[1]. According to the 4th edition (2008) of the WHO classification[2], primary systemic ALCL can be divided into two distinct categories: anaplastic lymphoma kinase-positive (ALK+) and ALK-negative. Majority of ALK+ ALCL contain a t(2;5) chromosomal translocation. The t(2;5) translocation fuses a distal part of the ALK gene on chromosome 2p23 with the promoter and a proximal domain of the nucleophosmin (NPM1) gene on chromosome 5q35[3]. The most common extranodal sites of ALK+ ALCL are the skin, bone and soft tissue. ALK+ ALCL cases involving the gut are rare[2].

Multiple lymphomatous polyposis (MLP) is thought to be a representative form of gastrointestinal lesion in mantle cell lymphoma (MCL)[2,4,5]. Here, we report an extremely rare case of ALK+ ALCL with gastroduodenal involvement presenting as MLP.

A 43-year-old Japanese man suffering from fever, night sweats, general fatigue and weight loss complained of a mass in the left inguinal area. The patient did not complain of gastrointestinal symptoms.

The patient was admitted to a local hospital. Computed tomography (CT) scan demonstrated multiple lymph node lesions continuing to the mesentery and para-aortic/left common iliac artery/left inguinal region (Figure 1). Scattered nodular lesions were found in both lung fields (Figure 1). Following needle biopsy of the left inguinal lesion, malignant lymphoma was suspected, and the patient was transferred to our department. 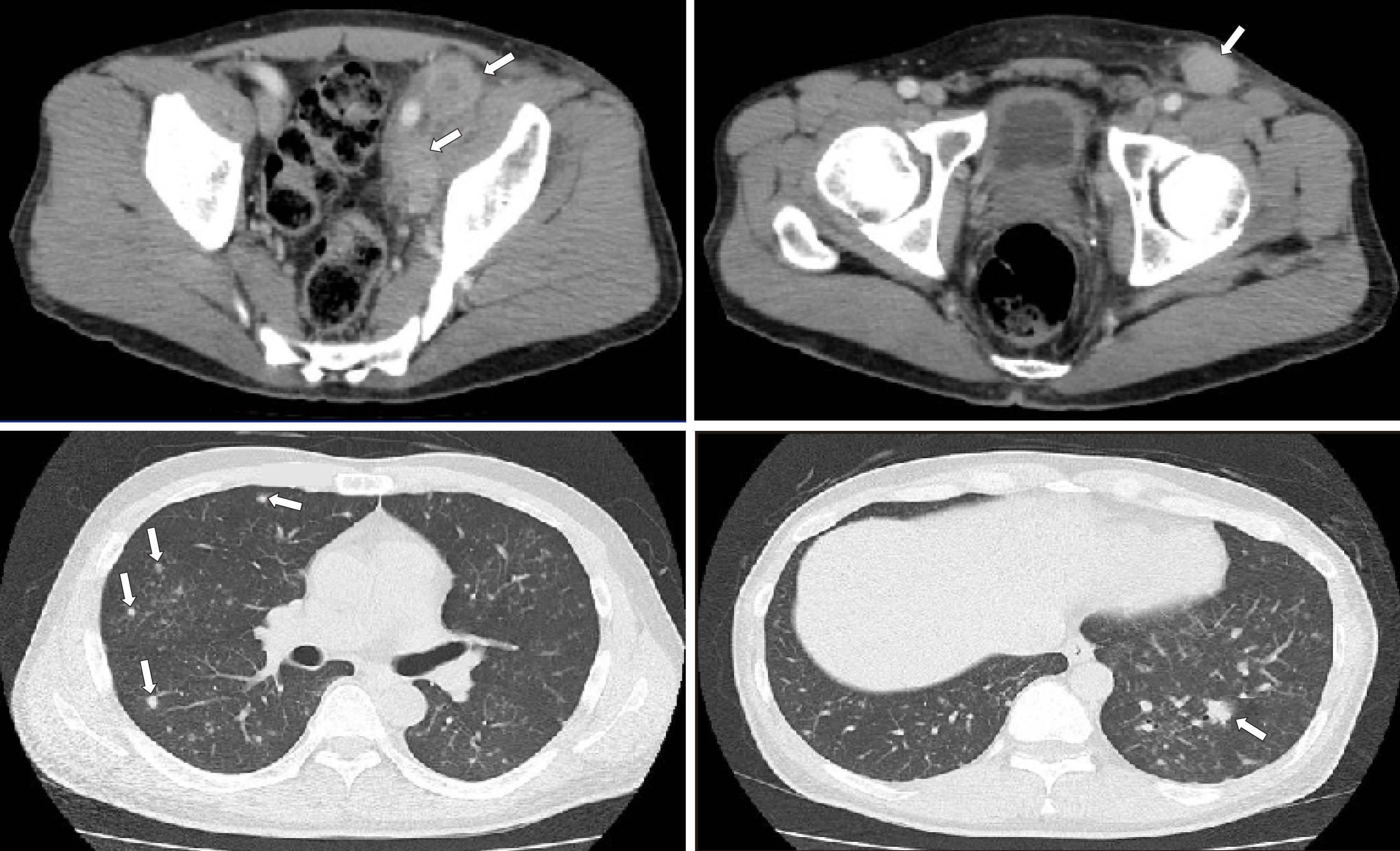 He had no chronic illness.

WBC and CRP showed markedly high values, and elevated platelet count, liver dysfunction, and hypoalbuminemia were also observed. In addition, the level of soluble interleukin-2 receptor (normal range: 121-613 U/mL), which was severely elevated according to the measurement of the previous hospital, had further increased over approximately one week (7120 → 12500 U/mL) (Table 1).

As measured by positron emission tomography (PET)/CT scan, the mean standardized uptake value was 18.1 in the abdomen – pelvis/inguinal nodes and 3.5 in the lung fields and the mediastinal nodes (Figure 2). 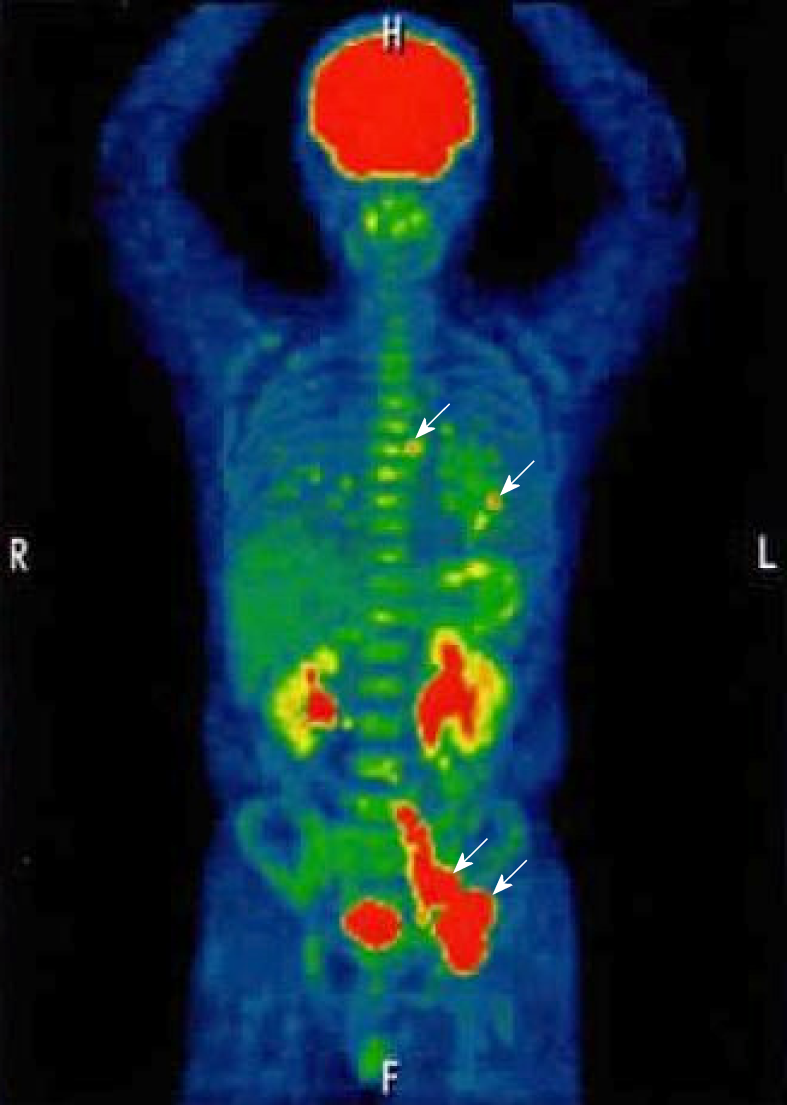 Figure 2 Positron emission tomography/computed tomography (longitudinal) image. Arrows indicate lymphoma lesions. The mean of the standardized uptake value was 18.1 in the multiple lymph node lesions continuing to the mesentery and para-aortic/left common iliac artery/left inguinal, 3.5 in the lesions of the lung fields and the mediastinal nodes. No uptake in the stomach and duodenum.

Esophagogastroduodenoscopy findings: In the descending portion of the duodenum, multiple polypoid lesions of 2-3 mm in diameter were observed (Figure 3A). Various large and small polypoid lesions were observed in the antrum of the stomach (Figure 3B and Figure 3C). These lesions are consistent with MLP continuously extending from the antrum of the stomach to the descending portion of the duodenum. Mucosal folds in the corpus of the stomach were slightly thickened, and its surface had changed to a white tone (Figure 3D). 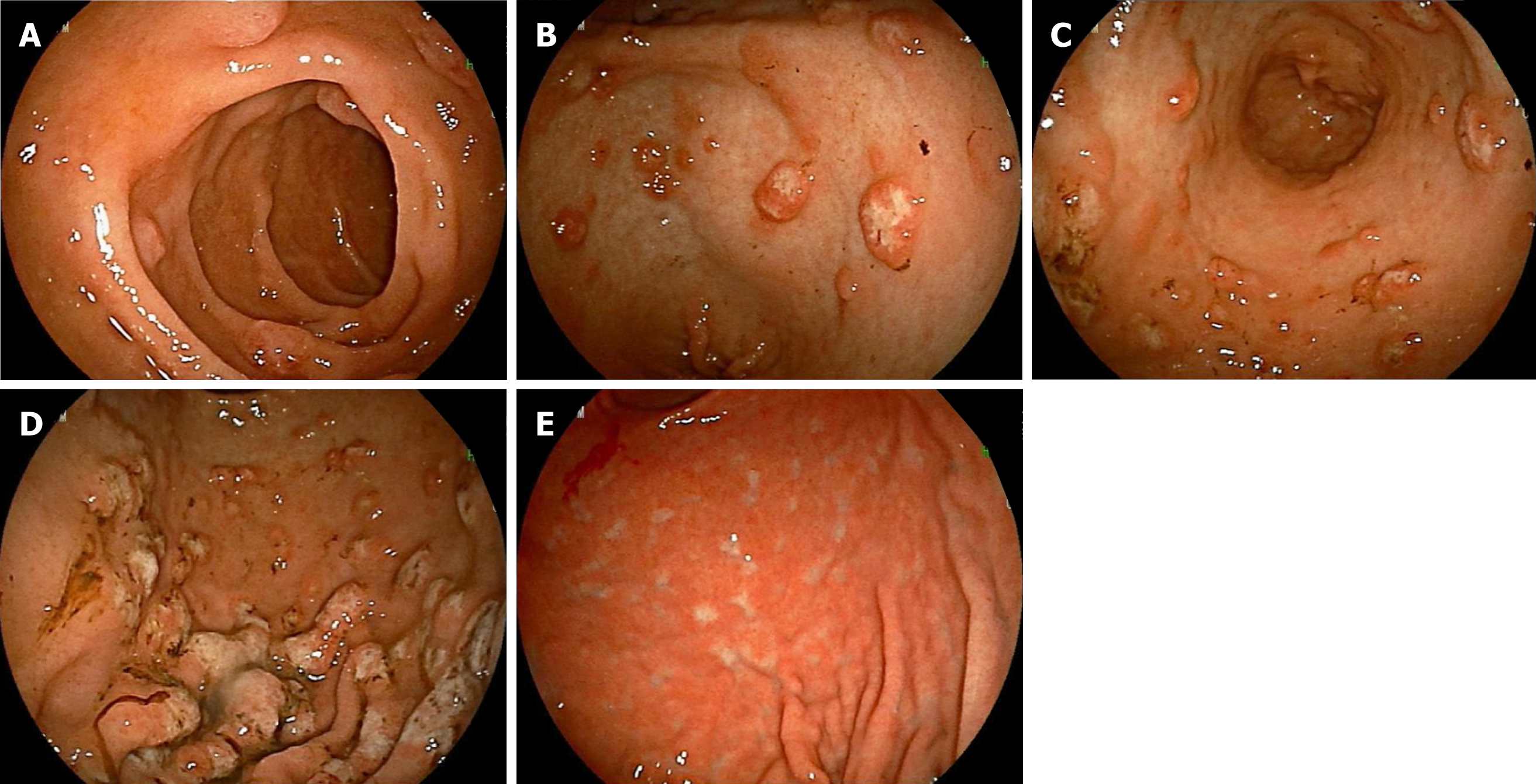 Figure 3 Esophagogastroduodenoscopy findings. Multiple polypoid lesions of 2-3 mm in diameter were seen in the descending portion of the duodenum (A). Various large and small polypoid lesions were seen in the antrum of the stomach (B; lesser curvature side, C; extensive curvature side), accompanied by a change in white tone at the center. Mucosal folds in the corpus of the stomach at the extensive curvature side were slightly thickened, and its surface had changed to a white tone (D). After treatment, numerous white scars were found, and the thickened mucosal folds were improved in the stomach (E).

The biopsies of both gastric and duodenal lesions proved the invasion of lymphoma cells, as below mentioned. These lesions could not be detected by PET/CT scan. Colonoscopy and bone marrow aspiration showed no involvement of lymphoma lesions. 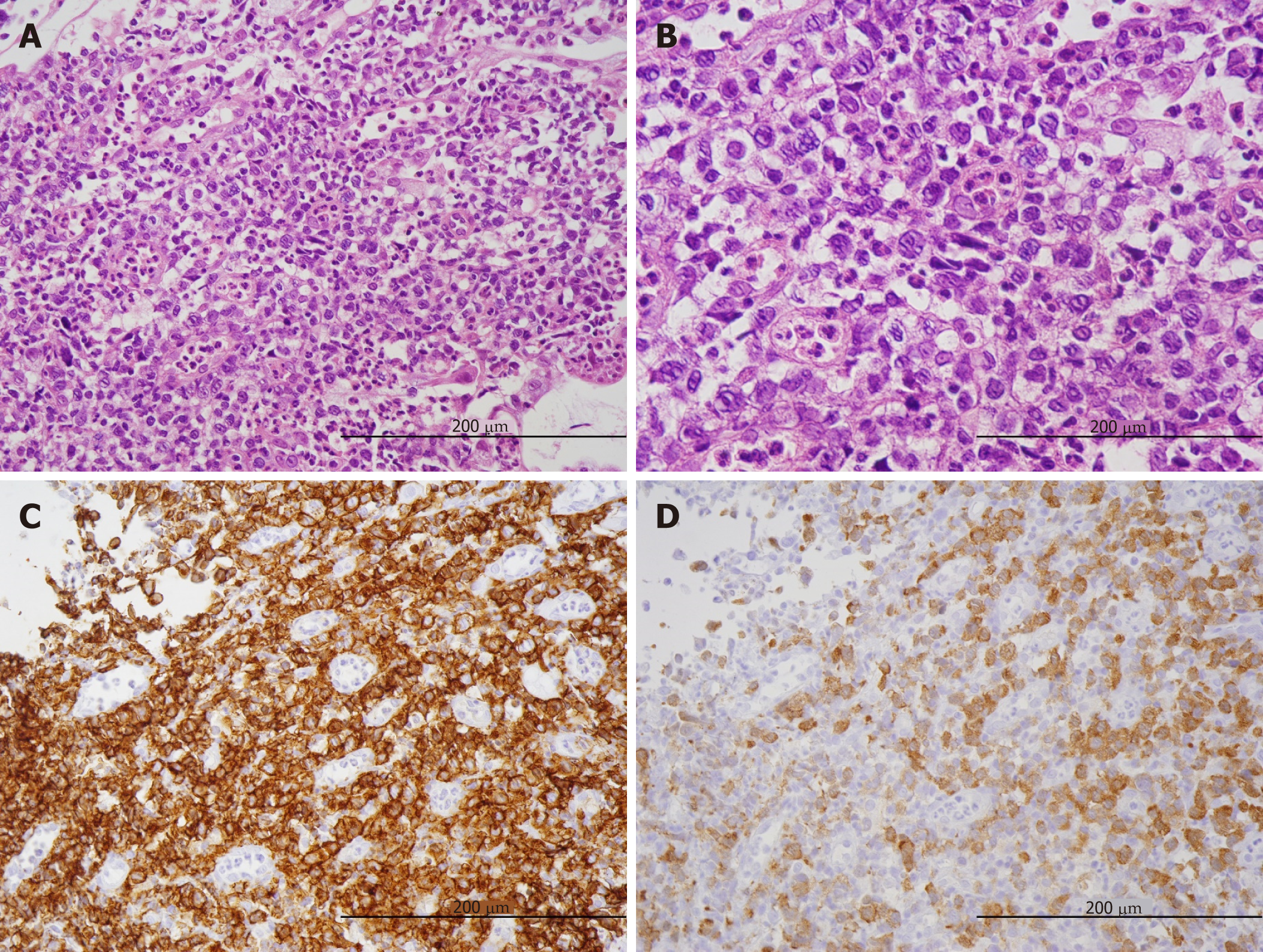 At the conclusion of treatment, there was complete remission. Numerous white scars were found in the stomach, endoscopically consistent with a remission image of lymphoma (Figure 3E). He is followed-up as outpatient with no treatment. There was no evidence of recurrence for more than 1 year and 10 mo since the end of the final treatment.

ALCL is a clinically, morphologically, and immunophenotypically heterogeneous T-cell lymphoma. Depending on the presence or absence of ALK expression, ALK+ ALCL was classified as a biologically homogeneous disease unit independent of ALK-negative ALCL in the 4th edition (2008) of the WHO classification[2]. ALK+ ALCL is more prevalent in children and young adults, and the ALK fusion protein is associated with a good prognosis[6]. In contrast, ALK-negative ALCL has a poor prognosis similar to peripheral T-cell lymphoma, not otherwise specified, and angioimmunoblastic T-cell lymphoma[7]. ALK staining pattern is nuclear and cytoplasmic in cases of t(2;5)/NPM-ALK translocation, and membranous or diffuse/granular cytoplasmic in the remaining cases with a variant translocation involving at 2p23[2,8]. ALK staining in our patient showed a nuclear and cytoplasmic pattern. G-banded karyotype of the lymph node lesions showed complex chromosomal abnormalities with +2, der(2;21)(q10;q10),+7, however, translocation at 2p23 could not be confirmed. ALK+ ALCL frequently involves both lymph nodes and extranodal sites. The most commonly involved extranodal sites include the skin, bone, soft tissue, liver and lungs as we reported here[2].

The term ‘‘MLP’’ was introduced in 1961 by Cornes to describe malignant lymphoma that presented as multiple polypoid tumors, from 2 mm to several centimeters, affecting long segments of the gastrointestinal tract[21]. Histopathologically, these polyps originate from the mantle zone of the lymphoid follicle of the mucosa-associated lymphoid tissue (MALT)[22]. Therefore, the most frequent lymphoma presenting with MLP is MCL[4,5], and it also develops in other B-cell lymphomas, such as MALT lymphoma and follicular lymphoma[23]. Furthermore, T-cell lymphomas seldom show this feature (11%)[24]. Several cases of adult T-cell leukemia/lymphoma presenting with MLP have been reported in Japan, which is an endemic area of human T-cell lymphotropic virus type 1 infection[25,26]. To the best of our knowledge, including ALK-negative, our case is the first observation of ALCL presenting with MLP. However, in contrast to what has been seen in MCL, the MLP presented in this case with, irregular sized-polyps arranged irregularly. In addition, no MLP lesion was found in the large intestine, which is frequently involved in MCL[27]. In our case, MLP lesions could not be detected with PET/CT scans. As we previously reported in a case of MCL[28], it appears that MLP lesions do not infiltrate the deep layer and instead maintain involvement with the surface layer of the gastrointestinal mucosa, even in the case of ALCL. The characteristic endoscopic findings of MCL are not only MLP, but also thickening of gastric mucosal folds has been reported[5]. In our case, thickened folds of the stomach were also seen, and the endoscopic features were thought to be similar to those of MCL.