We report a case of a 70 years-old man hepatitis B carrier with HCC treated four times with trans-arterial chemoembolization, presented to our surgical department complaining of gastrointestinal bleeding. A colonoscopy revealed a mass of 4 cm of the sigmoid colon with signs of bleeding. The computed tomography showed a mass originated from the sigmoid colon of 3.5 cm, and the presence of HCC in segment VI and VII, without portal vein thrombosis. Due to the large size of the mass and the active bleeding, the patient underwent a left colectomy. The postoperative period was uneventful, and the patient was discharged in fifth post-operative day. Histological examination revealed that the neoplasm was characterized by a diffuse proliferation of epithelial cells with an hepatoid differentiation. So, the presence of a history of HCC of the liver and the histopathological features supported the diagnosis of metastasis from the liver.

Although rare, colon metastasis from an HCC can be left-sided and can present with acute bleeding.

Core tip: Colon metastasis from hepatocellular carcinoma are extremely rare and, when present, they usually located in the right colon. We present a case of a left sided colon metastasis, which presented with acute bleeding and anemia for which the patient underwent left hemicolectomy.

Hepatocellular carcinoma (HCC) causes more than 1 million deaths annually and the incidence is increasing in the last few years.

Unfortunately, only 30% of patients benefit from resection, percutaneous ablation or liver transplantation.

In a series[1,2], the most involved organs , as extrahepatic metastasis, were lymph-nodes, lung, bone and adrenal gland. The involvement of the gastrointestinal tract seldom occurs, being found in only 0.5%-2% of cases[3,4] and 4%-6% in another series[1,2]. Usually colon metastasis is very rare, especially the left sided colon, and mostly occurs through direct invasion.

A 70 years-old man presented to our surgical department complaining of gastroin-testinal bleeding.

The patient was hepatitis B carrier with HCC treated four times with trans-arterial chemoembolization (TACE). He presented to the Emergency room after several hours of active gastrointestinal bleeding.

At admission vital signs were stable. Patient’s temperature was 36.6 °C and Glasgow Coma Scale (GCS) 15/15. The abdomen was soft, non-tender, and non-distended. No mass could be appreciated. Blumberg sign was negative. The rectal examination showed the presence of blood.

The computed tomography (CT) showed a mass originated from the sigmoid colon of 3.5 cm (Figure 1), and the presence of HCC in segment VI and VII, without portal vein thrombosis; at ultrasound the neoplasm seemed characterized by a dense vascular pattern. 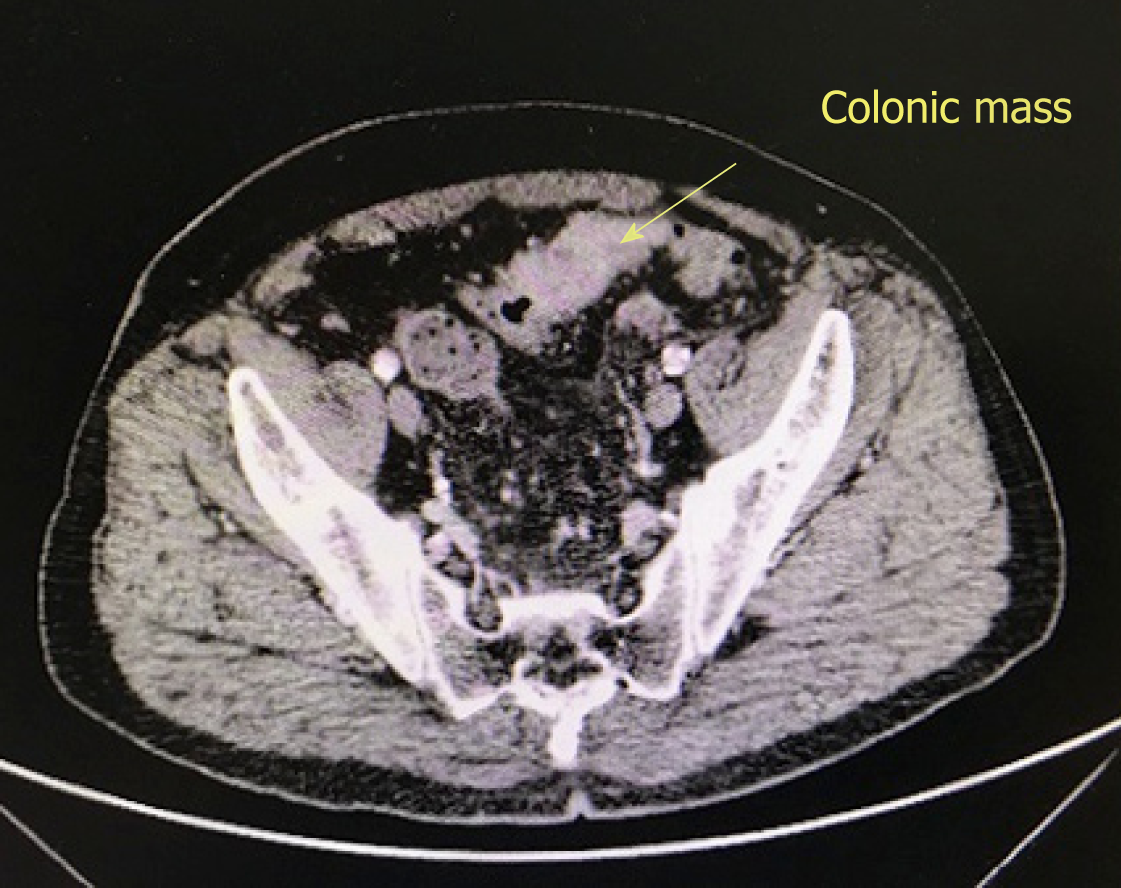 A colonoscopy revealed a mass of 4 centimeters of the sigmoid colon with signs of bleeding (Figure 2). 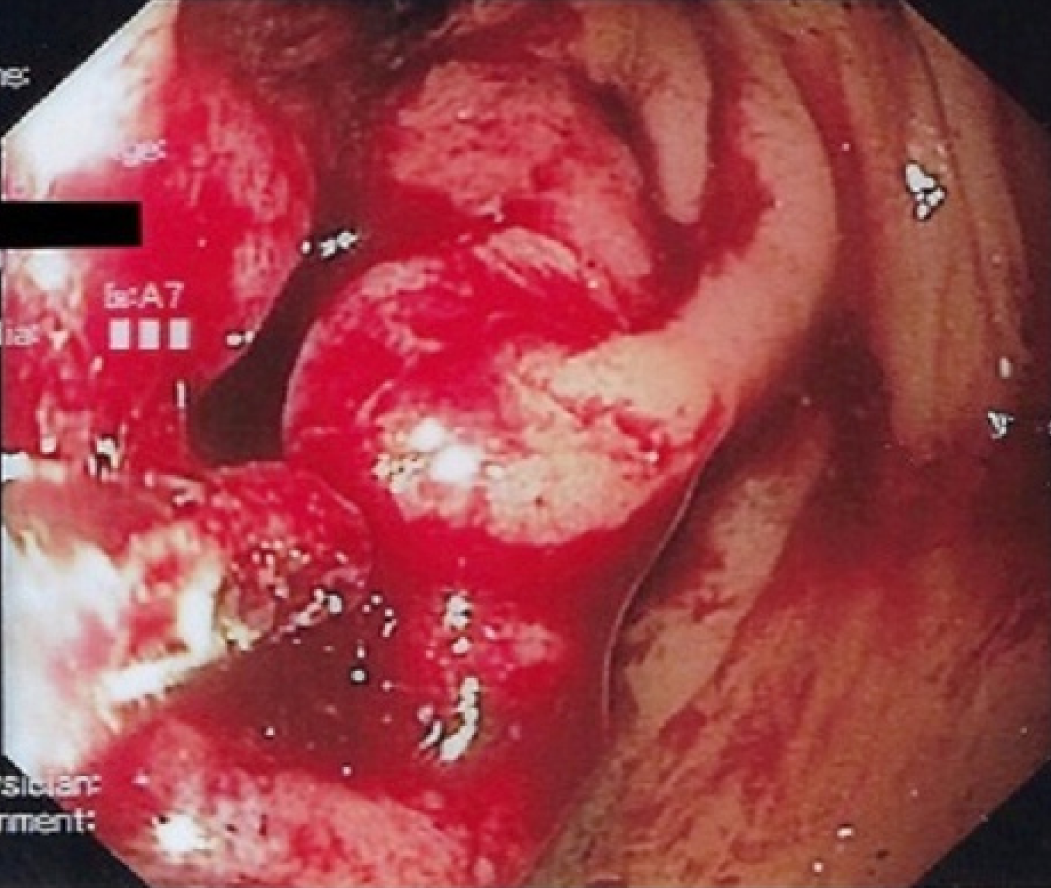 Because of the large size of the mass and the fact that it was bleeding, it was decided to subject the patient to a left colectomy. At laparotomy the lesion was situated in the distal sigmoid. No direct contact between the neoplasm and the liver was noticeable. Moreover, the sigmoid was normally placed and no dolichocolon sigmoid was repo-rted.

The postoperative period was uneventful, and the patient was discharged in fifth day post operative day. Histological examination revealed that the neoplasm was characterized by a diffuse proliferation of epithelial cells with an hepatoid differentiation (Figure 3A). In fact, the immunohistochemical reaction for HepPar-1 confirmed this type of differentiation (Figure 3B). The differential diagnosis was between a metastasis of HCC from the liver and an hepatoid adenocarcinoma of the colon, but the complete negativity for CK20 and CDX2 (Figure 3C and D) excluded a primary tumor of the colon[5]. So, the presence of an history of HCC of the liver and the histopathological features supported the diagnosis of metastasis from the liver. 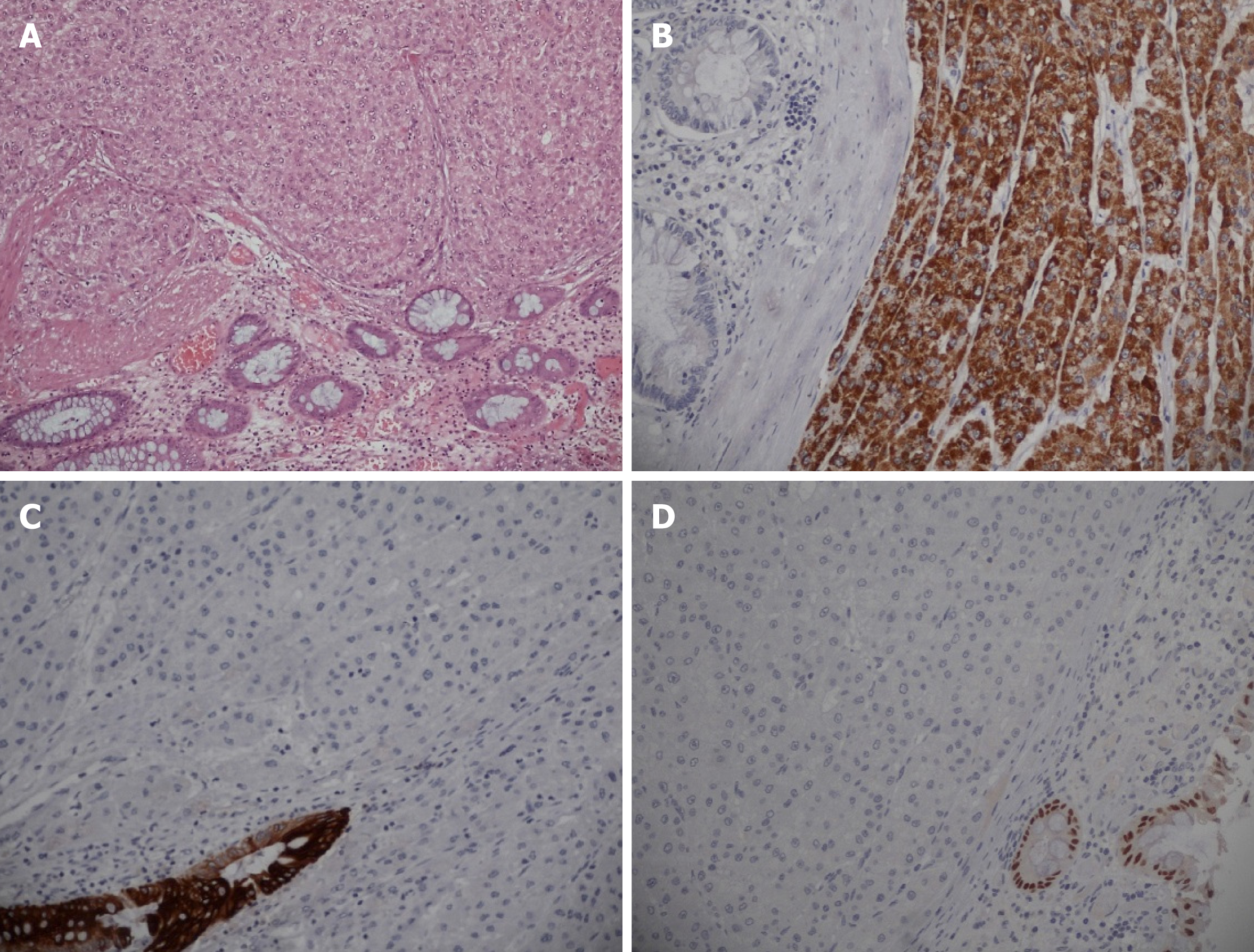 Figure 3 Histology images: Carcinoma with heapthoid differentiation. A: (Hematoxylin-eosin 100 ×); B: Confirmed by the positivity for HepPar-1 (200 ×); C: Negativity for CK20 (200 ×); D: CDX2 (200 ×) excluded the colic origin and it supported the diagnosis of metastasis from the liver.
DISCUSSION

HCC is one of the most common malignancies worldwide, and its incidence has been increasing in recent years. The prognosis has improved due to the advances in diagnostic imaging and new treatment modalities, but the management of recurrence is a critical problem[6].

Intrahepatic recurrences can be controlled by different treatment modalities, based on the different clinical conditions of the patients, such as hepatectomy, TACE and percutaneous ethanol injection therapy[7]. Because the incidence of extrahepatic metastases is less than that of intrahepatic metastasis, there are fewer documented treatment strategies for extrahepatic metastasis. At present, the prognosis of patients with extrahepatic metastases from HCC is poor[8]. The most frequent sites of extrahepatic metastases are bone, lung, adrenal gland and lymph nodes. Gastrointe-stinal involvement of HCC is uncommon. The most common modality of metastasis to the gastrointestinal tract is usually the direct invasion via adhesion to the serosal side by bulky tumor mass. The most frequently involved site is the duodenum, stomach, hepatic flexure of the colon and jejunum[3]. HCC may disseminate hematogenously to distant gastrointestinal tracts. Portal vein thrombosis may be the key point of hematogenous spread to other sites[4-9]. In our case, the HCC was localized to segment VI and VII, without portal vein thrombosis and metastasized to the left- sided colon five years after TACE.

Some authors[4] postulated that TACE may predispose to HCC metastasis by altering local vasculature and increasing inflammation.

Hematogenous spread was suggested because the metastatic site was distant and the lymph-nodes negative, Natsuizaka et al[8] reported, based on the initial diagnosis of intrahepatic HCC , that patients with advanced HCC develop extrahepatic metastases significantly more frequently than those with less advanced HCC.

There is no standard treatment for extrahepatic metastases of primary HCC, several authors have reported the use of various treatment modalities. However only few HCC patients can undergo surgical resection of extrahepatic metastases because of hepatic reserve or intrahepatic stage. There are reports that suggest that aggressive treatment prolonged survival. Lam et al[10] reported that they performed surgical resection in nine patients with pulmonary metastases and that the median survival period of the patients was 42 mo.

In literature there are little datas[11] regarding the efficacy of surgical treatment in patients with colon metastasis from HCC, our case was treated with surgical mana-gement because of the size of the colonic mass and the risk of occlusion.

According to the literature, the interval between the diagnosis of HCC and detection of gastrointestinal tract involvement ranged from 3 mo to 8 years[3,4]. Mostly, gastrointestinal metastasis is found in patients with advanced staged HCC. The prognosis is unfortunately poor with a median survival period of 7 mo[8].

However, it was suggested that treatment of extrahepatic metastases may improve survival in some selected patients who have good reserved function, intrahepatic tumor stage (T0-T2), and negative portal vein invasion or occlusion.

Even if rare, HCC metastasis must be taken in consideration in those patients with colon carcinoma with medical history positive for hepatocellular cancer or HCV/HBV infection. Even if the prognosis of these patients is usually poor, a hemicolectomy can be a life-saving maneuver and could improve overall survival in some selected cases.