Glaucoma is a group of diseases characterized by a specific pattern of optic nerve neuropathy and retinopathy. Increasing evidence demonstrates glaucoma associated corneal endothelium loss. Direct-compression mechanism due to elevated intraocular pressure (IOP), cell toxicity after long term exposure to preservatives and glaucoma surgery have been reported to be the possible mechanism. Herein, we compare the specular endothelial microscopy in primary open-angle glaucoma (POAG) patients and healthy controls of the same age group to observe the corneal endothelium changes and the correlations to the mean IOP in a Chinese case control study.

Patients with POAG have lower corneal endothelial cell density than healthy controls of the same age. This may be attributed to mechanical damage from elevated IOP and toxicity of glaucoma medications.

The corneal endothelial monolayer maintains corneal clarity by actively regulating stromal hydration through its barrier and pump functions. Corneal endothelial cells (CECs) have limited proliferative capacity in vivo[1,2], thus damage to the corneal endothelium is irreversible. Loss of CECs occurs as a consequence of intraocular surgery, trauma or diseases such as diabetes and glaucoma[3-8]. At the early stage of endothelial damage, neighboring cells spread and/or migrate to compensate for the cell loss, which results in an increase in cell size and/or alteration of cell shape. Progression of cell loss further compromises corneal transparency and causes corneal edema, bullous keratopathy and impaired visual acuity.

Glaucoma is a group of diseases characterized by a specific pattern of optic nerve neuropathy and retinopathy[6,7,9]. There is increasing evidence of glaucoma-associated corneal endothelial changes. Loss of CECs has been reported in various types of glaucoma such as primary angle-closure glaucoma, primary open-angle glaucoma (POAG) and some types of secondary glaucoma[7,9-15]. Endothelial cell loss is attributed to both glaucoma itself and treatment that lowers intraocular pressure (IOP). A direct-compression mechanism due to elevated IOP has been proposed in CEC loss in acute angle-closure glaucoma[11,16]. In addition, cell toxicity after long-term exposure to preservatives in ocular hypotensive drugs is considered another possible mechanism for endothelial damage[13,17]. Moreover, endothelial cell loss caused by glaucoma surgery has been reported in patients after application of antiproliferative medications in filtration surgery and aqueous shunt implantation[18-21].

In this study, we aimed to document the corneal endothelial changes and their correlations with mean IOP by comparing specular endothelial microscopy in patients of similar age with and without glaucoma.

Case control study. We recruited 60 POAG patients (32 male, 28 female; mean age 63 ± 13 years, age range 50-80 years) who visited the Glaucoma Division at the Fourth Affiliated Hospital, China Medical University between February and March 2019 and 60 age-matched healthy controls (28 male, 32 female; mean age 61 ± 12 years, age range 50–80 years). We retrospectively analyzed with regard to their pre-treatment characteristics. There was no significant difference of age between the two groups. Only one eye from each patient or healthy control was analyzed. All study procedures adhered to the Declaration of Helsinki for research involving human participants. The exclusion criteria included: previous ocular (including laser peripheral iridotomy), orbital or palpebral surgery; previous ocular trauma; previous or present contact lens use; other ocular diseases (such as corneal endothelial dystrophy, intraocular inflammation and infection) that could affect the corneal endothelium; and systemic diseases (such as diabetes and congenital abnormalities) that could affect the corneal endothelium.

The IOP of all subjects was measured using Goldmann tonometry every 2 h from 08:00 to 18:00 h. The average of all measurements was determined and used for analysis.

Statistical analysis was performed using SPSS version 19.0 (SPSS, Chicago, IL, United States). The unpaired Student’s t test was used to compare the means between normal subjects and patients with POAG. The Chi-square test was applied to the comparison between untreated patients and patients receiving ophthalmic medication. Correlation between IOP and each characteristic of CECs was assessed by Pearson’s correlation coefficient. Data are presented as mean ± SD and the significance level was set at 0.05.

ECD was significantly lower in patients with POAG (2757 ± 262 cells/mm2) compared to the control group (2959 ± 236 cells/mm2). The average cell area was significantly increased in glaucoma patients (364.37 ± 34.05 μm2) compared with the control group (322.23 ± 54.69 μm2). Consistently, glaucoma patients exhibited increased maximum, minimum and SD of cell area. There were no significant differences in the coefficient of variation of cell area and percentage of hexagonal cells between the two groups (Table 1, Figure 1). 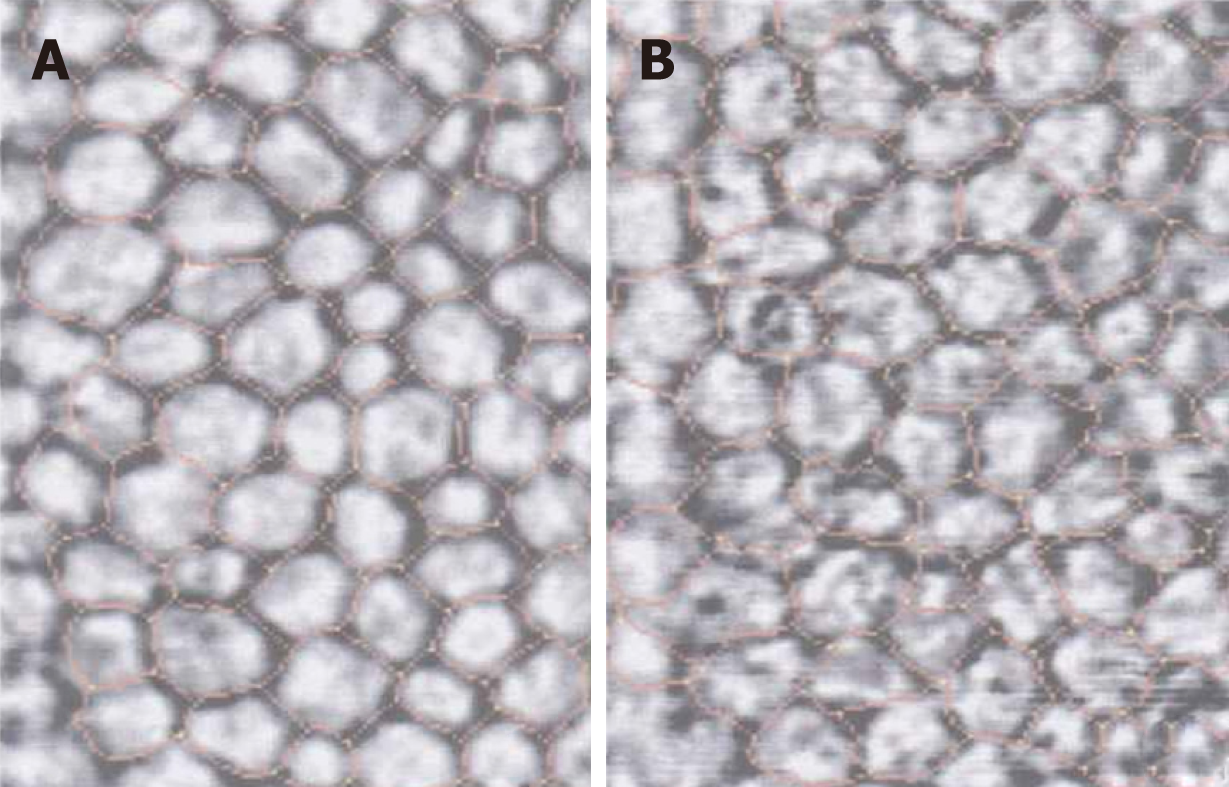 In Asian populations, primary angle-closure glaucoma is the major type of glau-coma[22,23]. However, a higher prevalence of POAG than primary angle-closure glaucoma has been reported in recent studies in Chinese populations[24,25]. Our data demonstrate that, in a Chinese case control study, patients with POAG had a reduction in corneal ECD and an increase in average endothelial cell area compared to age-matched healthy controls. To our knowledge, this is the first report on CEC loss in Chinese patients with POAG. Our data show a 5.47% reduction in ECD in POAG patients compared to healthy controls. Possible explanations include direct mechanical damage, elevated IOP, cytotoxic effects of ocular hypotensive eye drops, impaired endothelial metabolism due to disruptive aqueous humor circulation and congenital endothelial abnormalities.

Correlation between ECD loss and elevated IOP has been investigated[10]. High IOP directly damages the physical barrier function of CECs and affects the function of the endothelial pump leading to changes in aqueous humor dynamics, which cause corneal stromal edema[13]. Gagnon et al[13] hypothesized that the mechanism of IOP damage to CECs is as pressure dependent as damage to the optic nerve. Gagnon et al[13] showed that corneal ECD is inversely proportional to mean IOP. Some researchers hypothesized that CEC changes are not associated with high IOP[26-27]. Our data showed that the glaucoma and normal control groups had significant differences in corneal ECD, consistent with Gagnon et al’s[13] research.

Our results indicated the negative correlation between mean IOP and corneal ECD and the positive correlation between mean IOP and CEC area (Figure 2. High IOP may be an important factor in corneal endothelial injury. In a high IOP animal model, CEC density decreased by an average 5.8% compared with the normal control eyes[13]. CEC ultrastructure was observed by transmission electron microscopy, and mitochondrial swelling and vacuolar degeneration were observed after 3 d of high IOP, indicating that IOP damaged the physical barrier of endothelial cells. CEC dysfunction allows large amounts of water to enter the cells without any damage and cause endothelial cell edema. However, there was no significant change in intracellular nuclei compared to normal cells. However, if high IOP lasted for 2 wk, the mitochondrial vacuolization and dilated endoplasmic reticulum of CECs indicated aggravation of cell edema. Mild or moderate cell damage can return to normal after the cause of the damage is eliminated, or irreversible damage by cell necrosis may occur. Electron microscopic observation of CECs in a model with high IOP for 4 wk showed irreversible loss of heterochromatin edge, multiple nuclear membrane rupture, and nuclear efflux, showing signs of cell necrosis.

The above observations show that the longer the duration of high IOP, the more severe the ultrastructural destruction of CECs, which have some tolerance to high IOP. Within a certain range, if high IOP is controlled and the damage factor is removed, CECs can recover their structure and function and transparency. The longer high IOP persists, the less the healing capacity of CECs. When the damage exceeds its limit, irreversible damage occurs leading to moderate corneal edema and visual dysfunction.

It has been shown that damage to CECs can be caused by toxicity of anti-glaucoma medicine[28,29]. The preservative commonly used in anti-glaucoma medication, benzalkonium chloride, plays an important role in ocular surface damage. Its toxic and adverse effects are dose and time dependent and increase in combination and may damage corneal epithelial cells, CECs and central thickness of the cornea[30]. In this study, the corneal ECD of the glaucoma sub groups was compared, and covariance analysis was used to exclude the interference factor of average IOP on CECs. The ECD in the glaucoma treated group was significantly reduced compared with that of the untreated groups, which may have been caused by the benzalkonium chloride preservative in the anti-glaucoma medication. However, the difference in CEC area between the treated and untreated groups was not significant, and further large-scale studies are needed.

Aqueous circulation block may affect metabolism of the corneal endothelium and cause hypoxia in the aqueous humor[31]. That study reported that 30 patients with acute angle-closure glaucoma had significant changes in CEC density compared to normal subjects. The longer the duration of high IOP, the more severe the damage to the corneal endothelium was. The decrease in ECD and the increase in CEC area were related to the length of acute attack and high IOP. Meanwhile, patients with a history of acute attacks showed significantly increased cell area and various changes in shape. Even if the morphologically abnormal CECs show normal density, complications such as loss of corneal endothelial function are more likely to occur after surgery. CEC function requires a certain cell density, but more importantly, it depends on cell morphology, which is a more sensitive indicator of functional changes in the CEC membrane.

The normal corneal endothelium is composed of uniform regular hexagonal cells. Once this structure is destroyed, the corneal endothelium is in an unstable state, and the cells are easily damaged, which causes further deformation and loss[32]. High IOP and aqueous humor blockade can affect the metabolism of the corneal endothelium and cause pathological changes. Glaucoma patients may have congenital abnormal development of corneal endothelial cell layer and trabecular meshwork. In the diagnosis and treatment of glaucoma, the function of CECs directly affects visual acuity and tolerance of intraocular surgery as well as the treatment options. In patients with a history of elevated IOP, the risk of decompensation is greater, corneal edema is more likely and irreversible corneal opacity can be a perioperative or postoperative complication during or after intraocular surgery[33].

The corneal ECD in POAG patients is decreased and the average endothelial cell area is increased compared with those in healthy controls. High IOP and anti-glaucoma medication in POAG may be the main causes of CEC damage. Therefore, for glaucoma patients, quantitative analysis of CEC morphology is necessary, and high IOP should be controlled as soon as possible to prevent corneal endothelial damage.

To investigate the corneal endothelium changes and the correlations to the mean intraocular pressure (IOP) in POAG patients.

For glaucoma patients, quantitative analysis of CEC morphology is necessary, and high IOP should be controlled as soon as possible to prevent corneal endothelial damage.

Patients with POAG have lower corneal endothelial cell density than healthy controls of the same age. This may be attributed to mechanical damage from elevated IOP and toxicity of glaucoma medications.