Premonitory urges (PUs) was defined as the uncomfortable physical sensations of inner tension that can be relieved by producing movement responses. Nearly 70%-90% patients with Tourette syndrome reported experiences of PUs.

In this paper, we present two cases of young patients with PUs located in their tongue, which is very rare and easily misdiagnosed in clinical work. Both two young patients complained of an itchy tongue and cannot help biting their tongue. These two cases were worth reporting because it was rare that PUs was the initial symptom and located in the tongue. The results indicated that PUs seem to play an important role in the generation of tics.

Thus, PUs may be the first process, and an essential part, of the formation of tics.

Core tip: These two cases were worth reporting because it was rare that premonitory urges (PUs) was the initial symptom and located in the tongue. The results indicated that PUs seem to play an important role in the generation of tics.

Sensory tics, which were first described by Bliss[1] in 1980, have mainly been described as uncomfortable physical sensations of inner tension that can be relieved by producing movement responses. Over subsequent years, many researchers have used different terminologies to define this symptom[2-4]. For instance, Cohen and Leckman called it the “Sensory phenomena” including descriptors such as “Urge”, “Somatic Sensation” and “Heightened sensational Impulsivity”[3]. Some studies have demonstrated that sensory phenomena mainly include bodily sensations, mental urges and feelings of incompleteness, the need for things to be “just right”, and motor or vocal responses to the sensations are required[5,6]. However, most recent studies have used the term “premonitory urges (PUs)” to describe this sensory symptom[7-9].

Nearly 70%-90% patients with Tourette syndrome (TS) report experiences of PUs[10,11]. It has been proposed that there are three parts to PUs, including sensory urges (focal visceral-sensations or muscular-skeletal), autonomic urges (symptoms such as nausea, sweating, and palpitations) and cognitive urges (feelings of incompleteness)[5]. Although PUs were not included in the diagnostic criteria of TS, some published studies have regarded it as the core symptom of TS[12,13].

In this paper, we present two cases of young patients with PUs located in their tongue, which is very rare and easily misdiagnosed in clinical work. Both young patients complained of an itchy tongue and cannot help biting their tongue. These two cases were worth reporting because it was rare that PUs were the initial symptom and were located in the tongue. We also provide a literature review on PUs.

Case 1: A 9-year-old girl, started to eat less and less for half a year prior to exa-mination. Her main complaint was “Why is my tongue itchy?” The girl described her feeling as “My tongue was so itchy that I cannot help biting my tongue!”. Her weight went from 70 pounds to 36.

Case 2: A 5-year-old boy, also complained of an itchy tongue and could not stop biting the tip of his tongue (Figure 1). 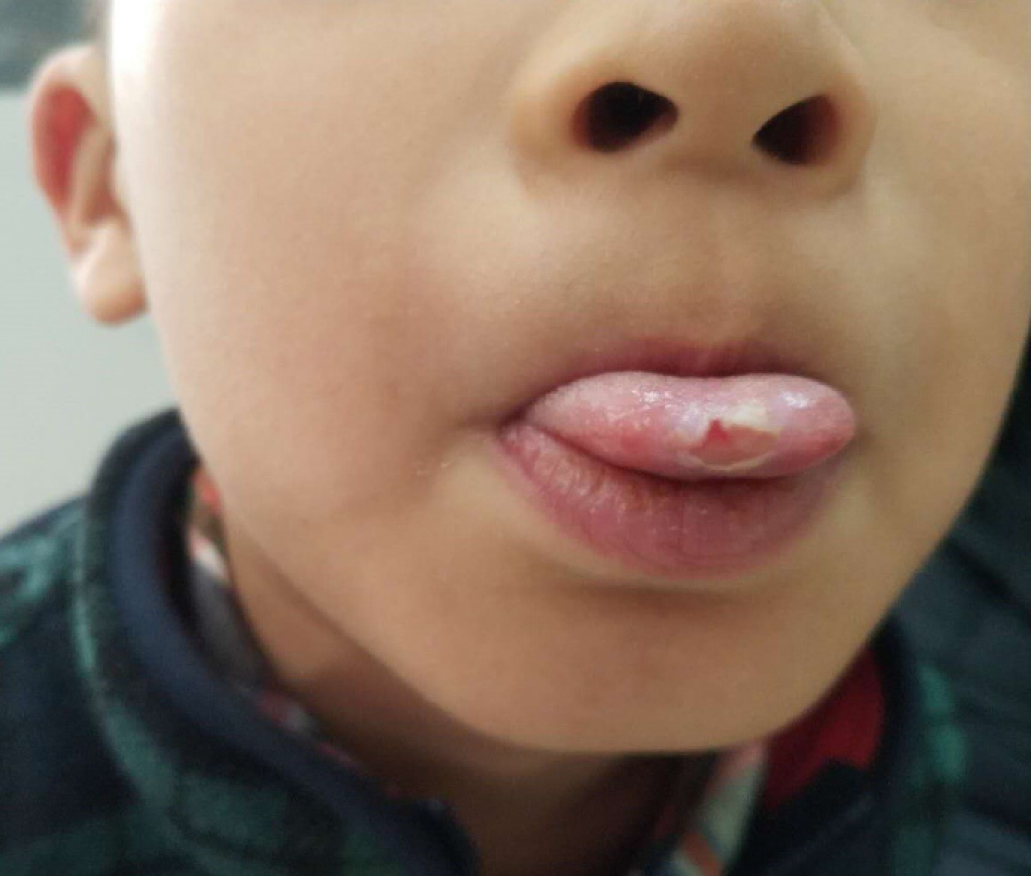 Figure 1 The tip of tongue for case 2. The boy can’t help biting his tongue, the tip of the tongue has been bitten through.
Personal and family history

Case 1: Her medical and family history did not reveal any relevant information.

Case 2: His medical and family history did not reveal any relevant information.

Case 1: Her temperature was 36.1, heart rate was 95 bpm, respiratory rate was 16 breaths per minute, blood pressure was 120/85 mmHg with oxygen saturation in room air was 98%. A clinical intraoral examination was conducted but no significant signal was found.

Case 2: His temperature was 36.4, heart rate was 98 bpm, respiratory rate was 18 breaths per minute, blood pressure was 120/80 mmHg with oxygen saturation in room air was 95%. We also performed a clinical intraoral examination but no significant indicator was found.

Case 1: During the hospitalization, the girl received a series of blood testing, but no significant clinical indicators were found (Table 1).

Case 2: There was no significant clinical indicators were found (Table 2).

Case 1: An Magnetic resonance imaging scan of her brain was also obtained but no significant findings were found (Figure 2).

For medical treatment, Aripiprazole (2.5 mg per day) was used. Psychological interventions were also performed to relieve the PUs (e.g., habit reversal training). The therapeutic effects and safety of this comprehensive treatment program were assessed during those treatments.

Clonidine transdermal patch on his back for 4 wk (1 pin).

The PUs was mostly relieved, “biting the tongue” has resolved, and her diet returned normal, as well, after four weeks. Finally, by following this treatment program, the girl recovered and was sent back to school after eight weeks.

After 6 wk treatment mentioned above, the boy recovered, and the “itchy tongue” was gone.

Although most children with TS report PUs[10], few cases have shown the onset of PUs at such a young age (i.e., Case 2). It should be noted that the reporting of PUs relies on an age-related ability to describe sensory phenomena[14]. Rozenman et al[15] reported that the severity of PUs increased with age. Woods et al[16] found that there were no correlations between the PUs and the severity of tics in young patients before the age of ten. Based on general clinical observations, Leckman et al[17,18] reported that young children with simple tics (e.g., a quick head jerk or blinking) did not always show sensory phenomena or were unaware of these symptoms until they were ten years old. The first case report for the present study supported that being 10 years old may play an important role in tic awareness. However, a low level of PUs has also been reported in younger patients (such as Case 2). For example, Gulisano found a low level of PUs in young patients with TS (mean age, 7.3 years ± 1.5)[11]. We should pay more attention to the “uncomfortable feelings” in young children and take PUs into consideration in clinical work. Developmentally, PUs often appeared three years after the first onset of tics[12,19]. However, in the two abovementioned cases, PUs was regarded as the initial symptom, which is rarely reported in clinical work. These cases indicate that PUs might be the first process in tic disorders for some clinical cases. Indeed, in many studies on PUs, patients always report that tics were executed to alleviate distress-related PUs[13,20]. Some researchers have proposed that there are two processes related to tics: The PUs (negative reinforcement) and the relief after tic expression (positive reinforcement)[16,21]. In the two case reports discussed here, the PUs (itchy tongue) may be an early indicator for tic generation. With the development of PUs, tics (biting the tongue) emerged later.

Moreover, it should be noted that the feelings of PUs might be vague and poorly localized in a certain area, such as the face, neck, shoulder or arms, but rarely in the tongue[8,22]. For the assessment of PUs, two validated scales, the University of São Paulo Sensory Phenomena Scale (USP-SPS) and the Premonitory Urge for Tic Scale, have been developed, and both have shown good psychometric properties[16,23]. While these two scales have been widely used in clinical research related to tics, they report the feelings before tics and the corresponding severity, but they do not include the locations of PUs. Kwak et al[6] also designed a questionnaire to identify PUs in patients with TS, which included the locations of PUs. He found that the anatomical locations, including the face/head, neck, shoulders, arms, hands, throats, feet, and stomach/ abdomen, were more often reported in TS with PUs. From the two abovementioned cases, we found that PUs could be easily misdiagnosed in clinical works. It seems that the clinical information about the locations of PUs was an indispensable piece of information for the assessment of PUs.

Several recent studies on children with TS have reported that the severity of PUs increases with the severity of the tics[8,24]. It has been indicated that increased insight into PUs could help patients recognize alleviating factors for tic symptoms and improve their ability to suppress them. For example, higher awareness of PUs could benefit tic suppression[20]. Furthermore, as a potential focus for behavioral or psychological therapy, PUs has received increasingly more attention in recent years[25-27]. The structured behavioral therapy called Comprehensive Behavioral Intervention for Tics has mainly focused on improving the awareness of tics such as PUs[28]. Although the exact role of PUs is unknown, it has been postulated that they could reflect subjective experiences below the tic-production threshold[12]. PUs might be a useful predictor for treatment response due to their relationship with tic severity[29]. It is believed that the hyperactivity of the insula, as well as the anterior cingulate cortex and the supplementary motor area was involved in the neural mechanism of PUs[30-32]. A recent structural neuroimaging study suggested that tic generation was mediated by the insula, which is responsible for the subjective perception of PUs[33]. The study indicated that the insula might play an important role in the translation of urges to tics[34,35].

These two case reports are the first to describe PUs as the initial symptoms of TS in clinical work in China. The results indicated that PUs seem to play an important role in the generation of tics. Thus, PUs may be the first process, and an essential part, of the formation of tics. The study of PUs, especially neural mechanisms underlying PUs, would facilitate the understanding of the pathophysiology and pathogenesis of tics.