Cardiovascular side effects occur frequently during anti-cancer treatment, and there is a growing concern that they may lead to premature morbidity and death.

Using alternatives to anthracycline in patients with lymphoma who are at risk of cardiac failure may preserve cardiac function.

Core tip: Anti-cancer treatment is frequently associated with the development of cardiovascular side effects. A 32-year-old woman diagnosed and treated for breast cancer was cured after comprehensive treatment. Unfortunately, the patient later presented with heart failure associated with anti-cancer treatment involving the use of anthracycline. Her cardiac function returned to normal after active treatment but a second primary malignancy, lymphoma, was detected in subsequent visits. Following multiple courses of chemotherapy combined with targeted therapy, there was complete remission of the acquired lymphoma with no re-occurrence of cardiotoxicity. Thus, heart failure related to breast cancer treatment may be reversible. Furthermore, anthracycline should be avoided in patients at risk of cardiac failure having lymphoma to preserve cardiac function.

Advances in anti-cancer treatment have greatly improved the survival rate of breast cancer patients, but morbidity and mortality due to side effects remain a concern[1]. Cardiovascular diseases (CVDs) are the most frequent side effects that may lead to premature morbidity and death among cancer survivors[2]. Among anticancer agents, anthracyclines are probably the most well-known class of cardiotoxic drugs capable of causing myocardial dysfunction and heart failure[3].

A 34-year-old Chinese woman presented with chest tightness and shortness of breath.

A right breast tumor was found during a routine physical examination 2 years prior to presentation. The diagnosis made was stage IIIA (T3N1M0) breast invasive ductal carcinoma, with ipsilateral axillary lymph node metastasis, ER (+), PR (+), and Her-2 (-). Thereafter, the patient first underwent four cycles of neoadjuvant chemotherapy using the following regimen: cyclophosphamide 600 mg/m2 1.0 g D1, epirubicin 100 mg/m2 160 mg D1, and fluorouracil 600 mg/m2 1.0 g D1, q21d. After this course of therapy, the patient was assessed as having partial remission (PR). Subsequently, a modified radical mastectomy was performed. Based on her postoperative pathological stage ypT1cN3, the patient further received another four cycles of adjuvant chemo-therapy comprising paclitaxel 90 mg/m2 150 mg D1, 120 mg D8 and D15, q21d. Postoperative adjuvant radiotherapy (50 Gy/30f) was also introduced. The irradiation field included the right chest wall and supraclavicular region. Since the patient tested positive for hormone receptor, the patient accepted being given adjuvant endocrine therapy consisting of goserelin acetate 3.6 mg once a month and anastrozole 1 mg qd. At the one-year follow-up visit, no recurrence or metastasis of breast cancer was ob-served.

The patient had good health.

The patient had no relevant personal or family history.

She was unable to lie down. Blood pressure was 119/86 mmHg. Heart rate was 78 beats per minute. Dry and wet rales could be heard in both lungs. 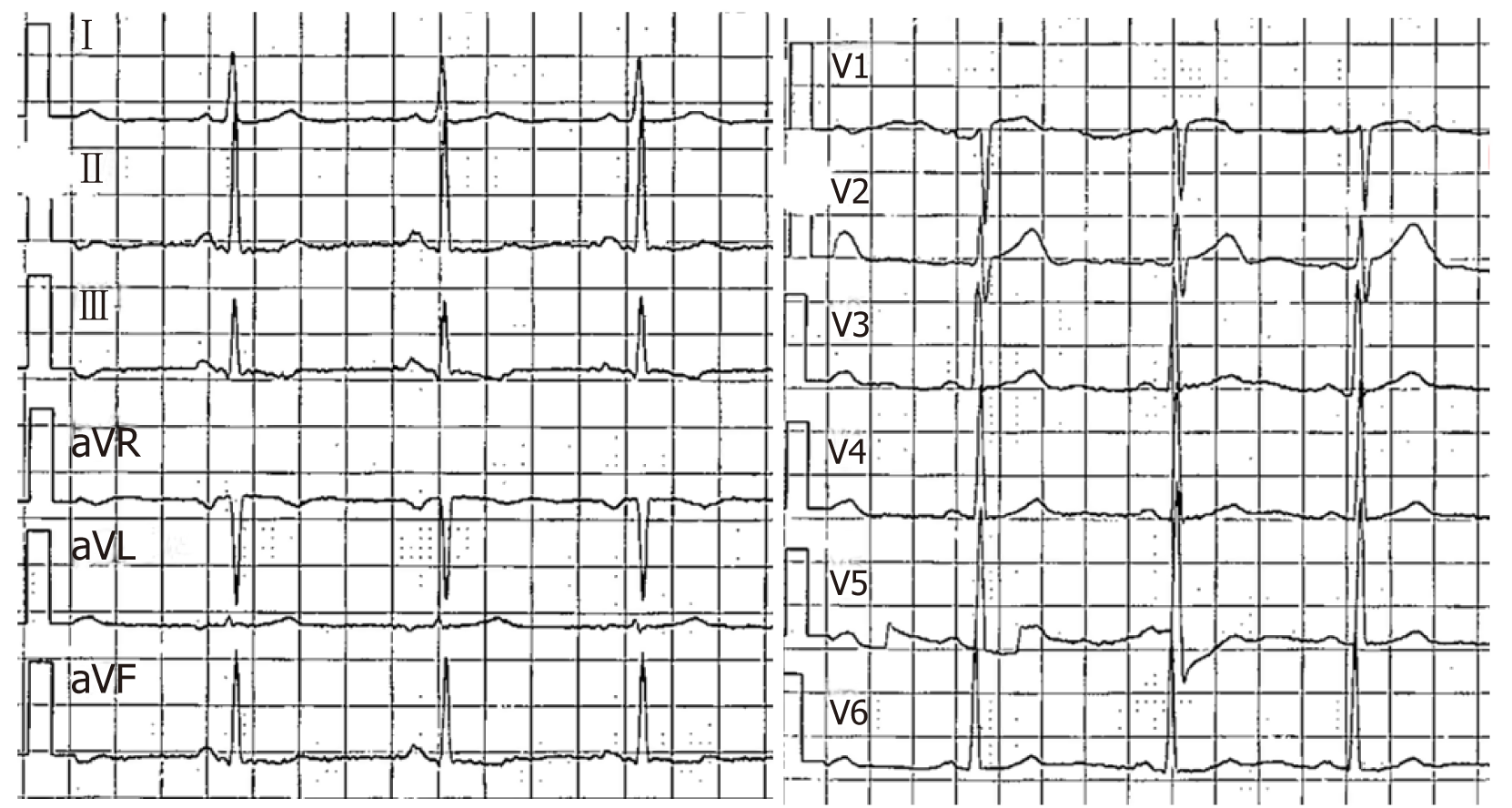 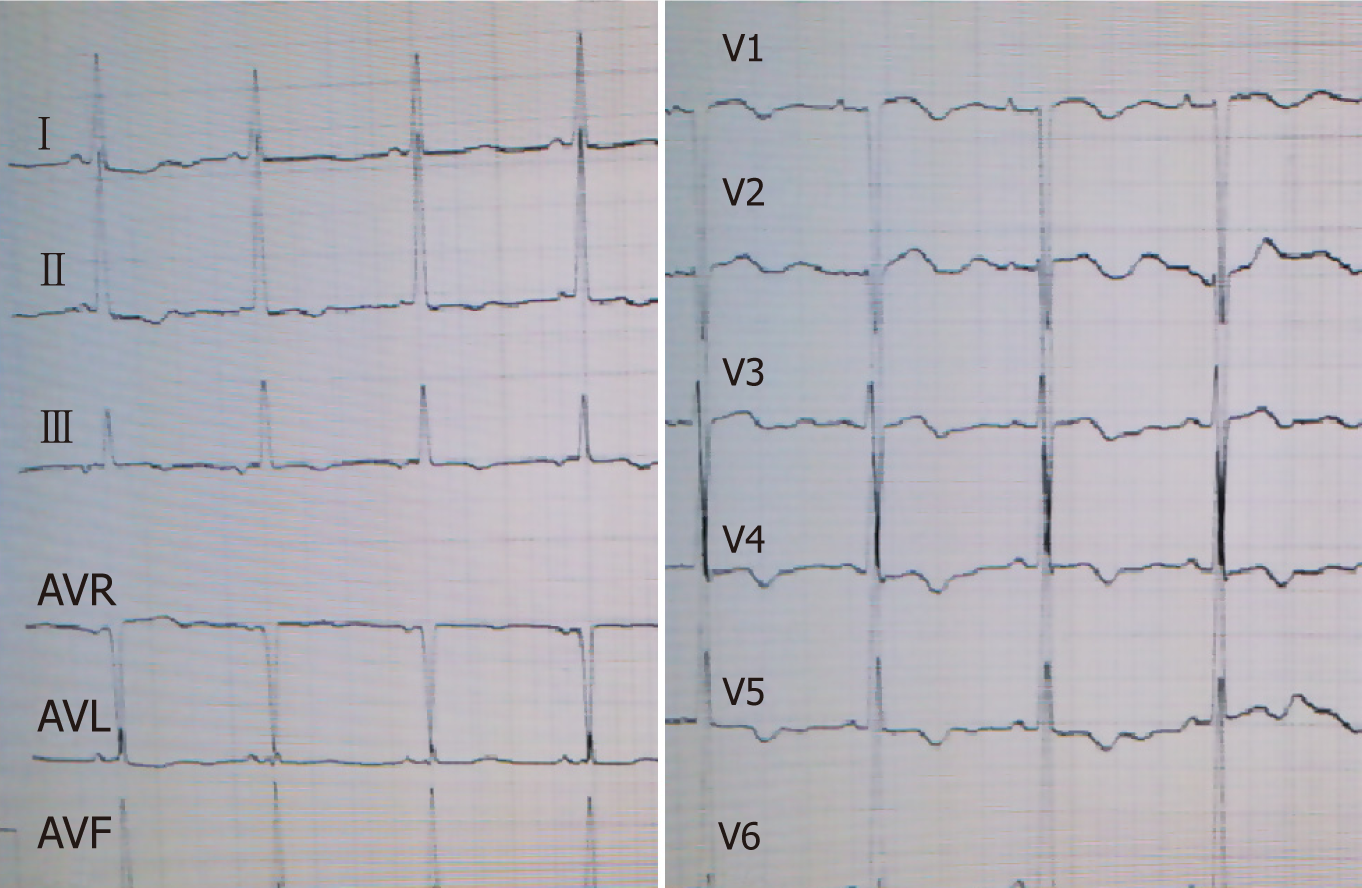 Figure 2 Electrocardiogram when the patient presented with dyspnea. T-wave inversion can be seen in the leads II, III, AVF, and V1-V6.
Imaging examinations

The patient was diagnosed as having acute left heart failure, which was considered as a morbidity of previous anti-cancer therapy.

After treatment with diuretics, nitrates, angiotensin converting enzyme inhibitor, and digoxin, the patient’s symptoms and signs gradually improved. Finally, the patient reported complete resolution of symptoms. She adhered to a treatment protocol consisting of digoxin, trimetazidine, and spironolactone for 3 years. Echocardio-graphy was reviewed at 12 mo after the diagnosis of heart failure, which indicated that the anteroposterior diameter of the left atrium was 30 mm, left ventricular end diastolic diameter was 45 mm, and LVEF had returned to normal (76%).

One year later, a left supraclavicular lymph node enlargement was found in the patient (Figure 3A). Lymph node biopsy indicated diffuse large B cell lymphoma (DLBCL) leading to a diagnosis of stage IIA involving the neck, left clavicle area, posterior left lobe of thyroid, and superior mediastinal lymph nodes. After fully assessing her cardiac function and the cardiac toxicity risk of chemotherapy, the patient was placed on a treatment regimen of rituximab combined with chemo-regimen. Considering her heart condition, the CHOP regimen was adjusted to CEOP (cyclophosphamide, vincristine, prednisone, and etoposide instead of doxorubicin). Thus, anthracycline was avoided. The patient received eight cycles of chemotherapy plus targeted therapy. 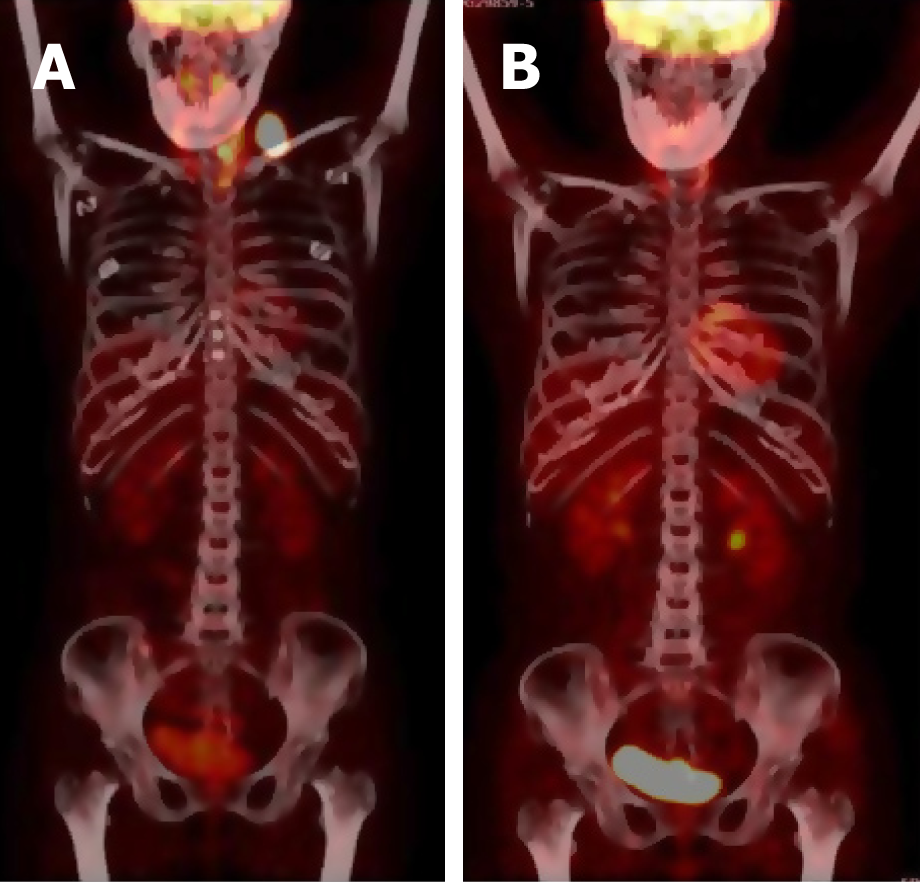 After four cycles of R-CEOP, complete remission (CR) was achieved and maintained continuously (Figure 3B). The major adverse effect was myelosuppression (leukocyte reduction). There was no obvious cardiotoxicity.

Follow-up visits continued for another 3 years. No recurrence of breast cancer or lymphoma was observed and cardiac function remained normal. The patient discontinued use of cardiac drugs but maintained endocrine therapy for breast cancer. The whole course of the patient’s treatment is shown in Figure 4.

Figure 4 Patient’s anti-cancer treatment schedule from the initial diagnosis of breast cancer to the treatment of lymphoma and accompanying follow-up.
DISCUSSION

The application of anthracyclines is a landmark in the development of medical oncology. Even today, this class of drugs are still widely used in the treatment of many solid tumors and hematological malignancies. However, the main dose limitation of these drugs is cardiac toxicities, which restrict their clinical use. The cardiotoxicity of anthracyclines may be acute, delayed, or chronic. Acute toxicities, predominantly appearing as supraventricular arrhythmia, transient LV dysfunction, and ECG changes, develop immediately after infusion and are usually reversible. The changes in the electrophysiologic properties of the heart may lead to QT prolongation. Though rare, this condition is dangerous because QT prolongation can lead to life-threatening arrhythmias such as torsades de pointes[6]. Direct activation of the delayed rectifier potassium current and inhibition of the expression of potassium current channels may be potential mechanisms for the observed cardiac toxicity[7]. Besides arrhythmia, anthracyclines are well known for their potential to cause cardiac insufficiency and heart failure. A higher cumulative dose of anthracycline poses a higher risk of cardiac toxicity[8]. For example, when the cumulative dose of doxorubi-cin reaches 400 mg/m2, the incidence of congestive heart failure is 5%, which increases to 48% when the cumulative amount reaches 700 mg/m2[3]. Therefore, in clinical practice, the cumulative dose of doxorubicin is generally kept below 450 mg/m2. Nonetheless, there is no absolute safe dose. As we have reported in this case, the patient received an epirubicin total dose of only 400 mg/m2. After comprehensive anti-cancer treatment, including chemotherapy, surgery, radiotherapy, and endocrine therapy, the patient presented with serious heart failure. This condition was directly associated with anti-cancer therapy and anthracycline was undoubtedly the most important contributor. The risk factors of anthracycline-induced cardiotoxicity include cumulative doses, gender (female), age (older than 65 years or less than 18 years), renal insufficiency, mediastinal radiotherapy history, and other associated drugs with cardiac toxicity (including cyclophosphamide, trastuzumab, and paclitaxel), and potential CVDs[9-11]. As mentioned earlier, the main cardiac toxicities of anthracycline are myocardial dysfunction and heart failure. The left ventricular dysfunction caused by anthracycline is partly due to the production of oxygen free radicals and the increased oxidative stress. As a result, myocardial damage occurs, partly due to the inhibition of topoisomerase II beta by the oxidation-reduction cycle of the quinone group, which indirectly leads to mitochondrial abnormalities. Anthracyclines also inhibit iron metabolism and lead to iron accumulation in cardiac myocytes; therefore, iron balance may also play a role in myocardial injury[12]. A consequence of exposure to anthracyclines is cardiomyocyte apoptosis or necrosis. This patient’s cardiotoxicity occurred more than one year after the treatment for breast cancer and, hence, is a delayed cardiotoxicity. It is generally believed that anthracycline-induced cardiac toxicity is irreversible[13]. However, some studies have shown that it is reversible in the first 3-6 mo after the decrease in ejection fraction[14,15]. In this case, the patient’s heart function gradually returned to normal after active treatment.

The complexity of this case is that the patient developed a second primary malig-nancy, lymphoma. Developing a secondary malignancy is not rare but, a comorbidity of heart failure presents a great challenge in the treatment of lymphoma. For DLBCL, the classic regimen is CHOP, which contains cardiotoxic drugs. So, it is important to fully assess the cardiac function and the cardiac toxicity risk before initiating chemotherapy. In this case, anthracycline was replaced by etoposide, which may have lower efficacy but no significant cardiac toxicity. Fortunately, this patient acquired persistent CR without experiencing further cardiac toxicity. There is no standard treatment for DLBCL in elderly patients or patients with underlying diseases, such as cardiac dysfunction, which restricts the use of anthracycline. If there are contraindica-tions in the use of anthracycline, other drugs such as gemcitabine, etoposide, and bendamustine can be explored as alternatives. Although most published large-scale clinical data show that chemotherapy without anthracycline had a negative effect on the long-term survival of aggressive non-Hodgkin lymphoma, if anthracycline use poses potentially life-threatening cardiac toxicity, it may well be in the patient’s best interest to discontinue its use[16].

The adjuvant treatment for early breast cancer is associated with improved survival but at the expense of increased cardiotoxicity risk and cardiac dysfunction. It seems that concomitant therapy with angiotensin receptor blocker and/or beta-blocker can alleviate the decline in LVEF associated with adjuvant anthracycline-containing regimens with or without trastuzumab and radiation[17]. For a long time, the clinical use of doxorubicin is limited by its cardiotoxic effects that can lead to heart failure. However, earlier work focused on the direct impact of doxorubicin on cardiomyo-cytes. Recent studies have evaluated the effects on the endothelium, because doxorubicin-induced endothelial damage can trigger the development and progression of cardiomyopathy by decreasing the release and activity of key endothe-lial factors and inducing endothelial cell death. Thus, the endothelium represents a novel target for improving the detection, management, and prevention of doxorubicin-induced cardiomyopathy[18].

The process of anti-cancer treatment should be adjusted according to the risks of cardiac toxicities, medical history, and previous treatment[19]. So, similar to the reported case, if we diligently weigh the pros and cons, choose regimens carefully, monitor cardiac toxicity closely, and even take some preventive measures, patients would benefit more without encountering high risks.