We report a child who initially presented with failure to thrive and mildly elevated transaminase levels and was determined to have pancreatic insufficiency due to SDS. During follow-up he had persistently elevated transaminase levels and developed hepatosplenomegaly. An investigation was performed to determine the etiology of ongoing liver injury, including a liver biopsy which revealed hepatic cirrhosis.

Cirrhosis has rarely been reported with SDS. While many of the hepatic disorders associated with SDS improve with age, there are rare exceptions with serious implications for long-term outcome.

Core tip: Shwachman-Diamond syndrome (SDS) is an uncommon disorder characterized by skeletal abnormalities, bone marrow dysfunction and exocrine pancreatic insufficiency (EPI); a rarely reported complication is hepatic cirrhosis. Similar to the natural history of EPI, most of the hepatic abnormalities associated with SDS improve or resolve with age. We report this patient to highlight the importance of close follow-up of patients with SDS and hepatic dysfunction as some will progress to cirrhosis, which portends a less favorable prognosis.

A 16-month-old white male presented with a chief complaint of long-standing failure to thrive first noted around 2-mo of age. The parents reported that initially he had poor weight gain but after several months he also developed poor linear growth. He maintained excellent oral intake without vomiting. Bowel movements were described as large, foul-smelling, non-watery and without blood, occurring 3 to 5 times per day. Past medical history revealed the he was delivered via spontaneous vaginal birth following a benign pregnancy and labor. Intrauterine growth restriction was not present. He had no history of recurrent gastrointestinal or sino-pulmonary infections. At presentation he weighed 6.99-kg (50% for a 4-month old infant). There were no cardiac murmurs, the lung examination revealed good air exchange without adventitious sounds. Abdominal examination revealed hepatomegaly without splenomegaly. He had markedly thin extremities with muscle wasting but no edema or clubbing. Laboratory evaluation included a complete blood count, complete metabolic panel, creatinine kinase, thyroid stimulating hormone, free-T4, serum IgA, tissue transglutaminase, and urinalysis, which were all normal except for very mild elevation of the transaminase levels (ALT = 52 U/L, ULN = 41 U/L; AST = 124 U/L, ULN = 40 U/L). Fecal qualitative fat was increased. Sweat chloride testing was normal on two occasions. Due to concern for SDS a skeletal survey was performed revealing abnormal tubulation of the long bones and narrowing of the sacral sciatic notches, suggestive for SDS. Esophagastroduodenoscopy (EGD) with biopsies and pancreatic stimulation test was performed. Biopsies of the antrum and duodenum were normal. Pancreatic stimulation test showed a generalized deficiency in pancreatic enzyme activities (trypsin, amylase, lipase, and chymotrypsinogen). Pancreatic enzyme replacement was started. Subsequent gene sequencing confirmed two heterozygous mutations in the SBDS gene confirming the diagnosis.

The patient maintained mildly elevated transaminases (Figure 1). Due to worsening hepatomegaly, and development of splenomegaly, a liver biopsy was performed at 32 mo of age. The biopsy showed hepatocytes with moderate to severe macrovesicular steatosis without necrosis and hepatocyte nodules surrounded by fibrous septa with moderate lymphocytic inflammation consistent with cirrhosis. Further testing for an etiology of cirrhosis was non-diagnostic, including ceruloplasmin, alpha-1-antitrypsin phenotype, autoimmune markers (anti-smooth muscle antibody, anti-liver-kidney-microsomal antibody, and anti-nuclear antibody), carbohydrate deficient transferrin, and the EGL Genetic Cholestasis Panel (a proprietary test that screens for 66 genetic disorders associated with liver disease). 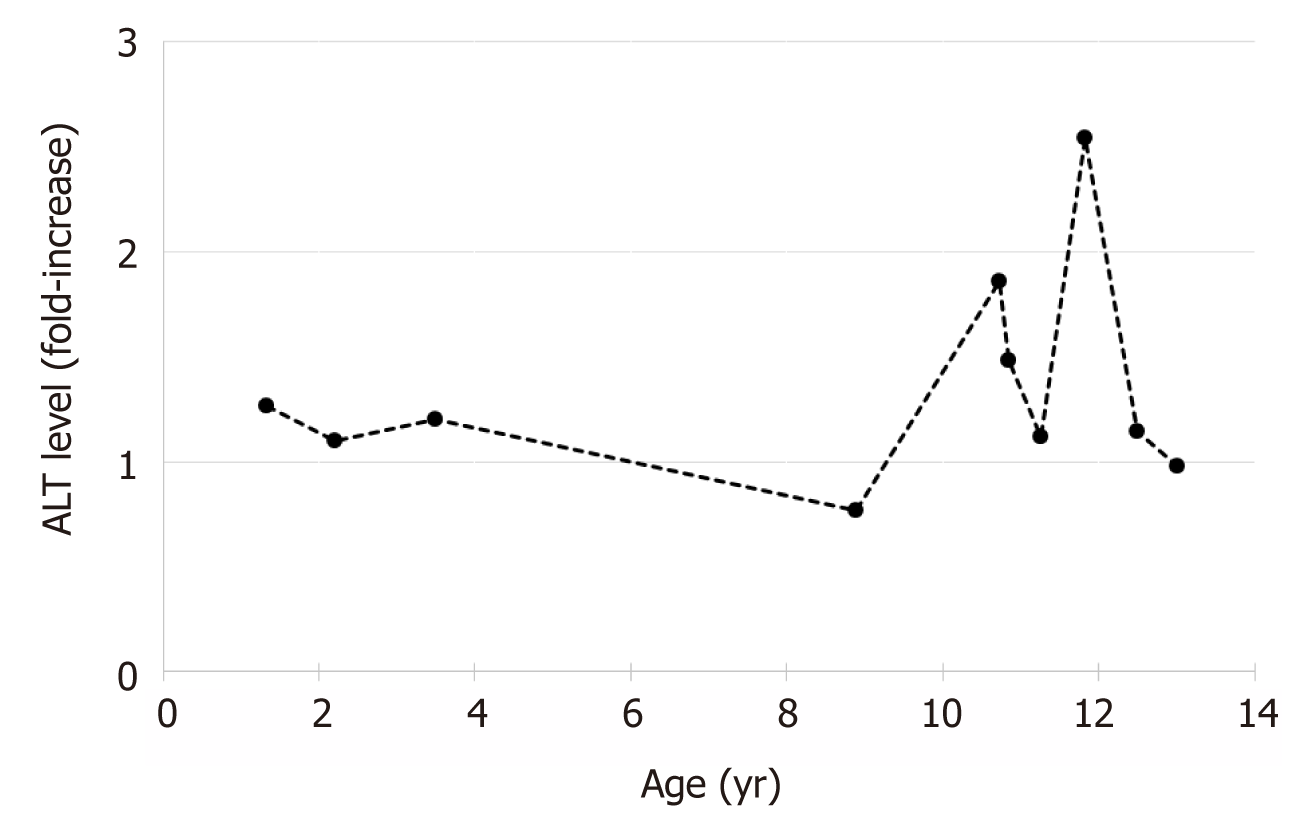 At 13-years of age he remains asymptomatic, without abdominal pain, diarrhea, jaundice, pruritus, easy bruising, or gastrointestinal bleeding. Despite compliance with pancreatic enzyme replacement, his growth remains poor, with a height at the first percentile and a BMI at the second percentile for age and gender. He has no hepatomegaly or cutaneous stigmata of chronic liver disease, to include spider angiomata, palmar erythema, and xanthomas.

The final diagnosis of the patient was Shwachman-Diamond syndrome complicated by cirrhosis, portal hypertension and resulting esophageal varices.

The patient was treated with pancreatic enzyme replacement for pancreatic insu-fficiency due to Shwachman-Diamond syndrome. The esophageal varices were treated with band ligation without further bleeding.

The patient continues to have need for pancreatic enzyme replacement. He has been referred for evaluation for liver transplantation due to cirrhosis.

Hepatomegaly is also a well described finding in SDS, reported in 4% to 62% of affected patients[2,7,8,10,11]. The liver tends to be mildly enlarged, although massive hepatomegaly can be seen[7]. Hepatomegaly is a more common finding in younger children and tends to normalize in most by 3-years of age (85%-86%), similar to the pattern seen for aminotransferase levels[2,11]. Histologic abnormalities on liver biopsy include varying degrees and combinations of steatosis, cellular inflammation, and fibrosis. Patients with hepatomegaly show the same spectrum of histologic findings as those without hepatomegaly[8,10]. Steatosis has been reported as microvesicular, macrovesicular, and mixed micro- and macrovesicular. Hepatic steatosis is thought to arise secondary to malnutrition or infection[2]. Inflammatory cell infiltrate tends to be mild and localized to the portal and periportal areas. Scarring is frequently reported as portal or periportal fibrosis, and less commonly bridging fibrosis. Cirrhosis has rarely been reported in association SDS, with no reports in over 50 years[4,5]. In a review by Bodian et al[4], five children were described with SDS and cirrhosis, which was discovered at autopsy in all cases[4]. Four of the children were between the ages of 12 years and 14 years, the other child was only 2 years old, and was described as having “early cirrhosis”.

The pancreas and liver share a common embryonic origin and precursor cells of these organs may share many phenotypical and functional traits, which may help explain why pancreatic and hepatic function both improve over time in patients with SDS[11]. However, the mechanism of improvement remains unclear.

We report a child with SDS discovered to have cirrhosis at an extremely early age; extensive investigation failed to reveal an etiology other than SDS. It is important for Pediatric health care providers to recognize that children with SDS may have hepatic involvement which tends to be mild and improves or resolves with age. Rarely, more severe hepatic disease can occur that will require evaluation by a Pediatric Gastroen-terologist. This information may be beneficial to the primary care provider in the care of children with SDS.