Mucinous adenocarcinoma represents a rare subtype of adenocarcinoma of the lung, which is frequently invasive and has a poorer prognosis. Of its wide range of imaging appearances, air-space consolidation is the most frequent pattern while cavitary form has only rarely been reported. Despite imaging advancements, the differentiation of benign and malignant cavitary lung lesions sometimes remains imperfect. We propose “Tambourine” sign on computed tomography to raise the suspicion of mucinous adenocarcinoma in a lung cavity, under appropriate clinical settings. The sign indicates an irregular cavity with undistorted prominent thick walled bronchioles within the wall and draping along thereby resembling the musical instrument “tambourine”. Adjacent ground glass and internal septations may also be seen.

Core tip: Lung cavities are commonly encountered in routine chest imaging and diagnosis may become a challenge in certain cases despite advances in imaging techniques. Imaging points have been described in literature to differentiate benign from malignant cavities that help in diagnosing most of the cases, however some lesions are still difficult to interpret and accurately diagnose. Tambourine sign has been introduced by us for a relative thin walled lung cavity where undistorted smaller bronchi with thickened and prominent walls are seen to be entering and draping along the cavity walls. This imaging sign resembles the musical instrument tambourine, and this is ominous and point towards a more sinister lesion as in our case and in similar cases reported in literature. Hence in appropriate clinical and imaging background this sign should be carefully looked at and appropriate workup should be done for timely diagnosis.

We present a case of 37-year female who presented with a thin-walled left lower lobe (LLL) lung cavity six years ago, but remained undiagnosed despite adequate workup, till a final diagnosis of IMAC was made. Review of literature focussing on radiological findings of this unusual cavitary appearance of IMAC is discussed.

A 37-year non-smoker female presented to our institute with history of cough, sputum, shortness of breath, loss of weight and episodic hemoptysis in November 2014. Her problem began in 2008 with an episode of cough, streaky hemoptysis and copious sputum production, which was treated with antibiotics as respiratory tract infection. Multiple subsequent hospital admissions and extensive clinical/radiological workup was done (Figure 1) for similar complaints but was inconclusive (Figures 2 and 3). 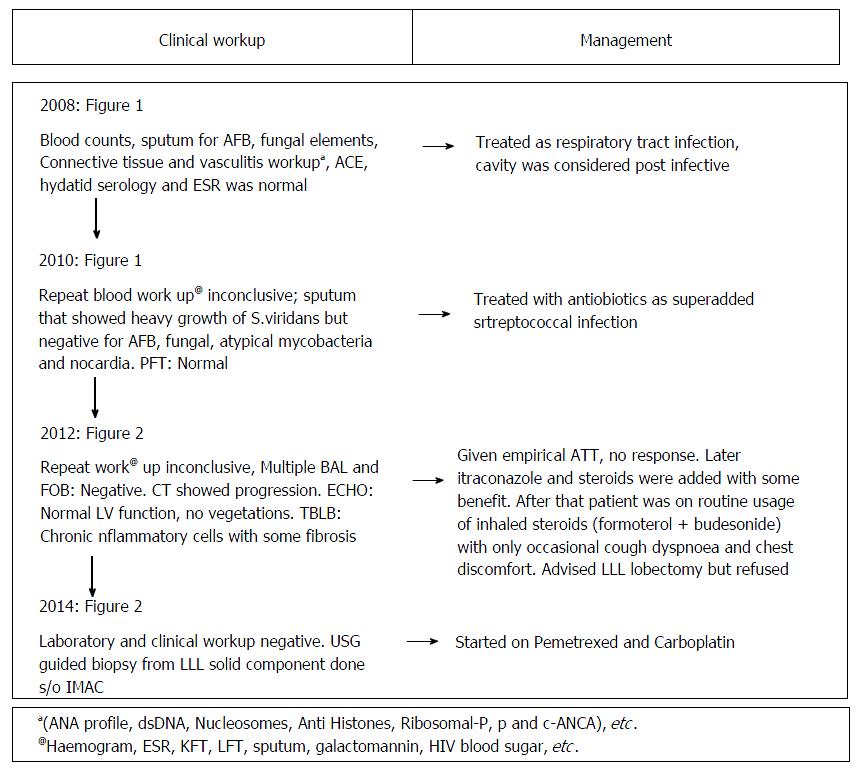 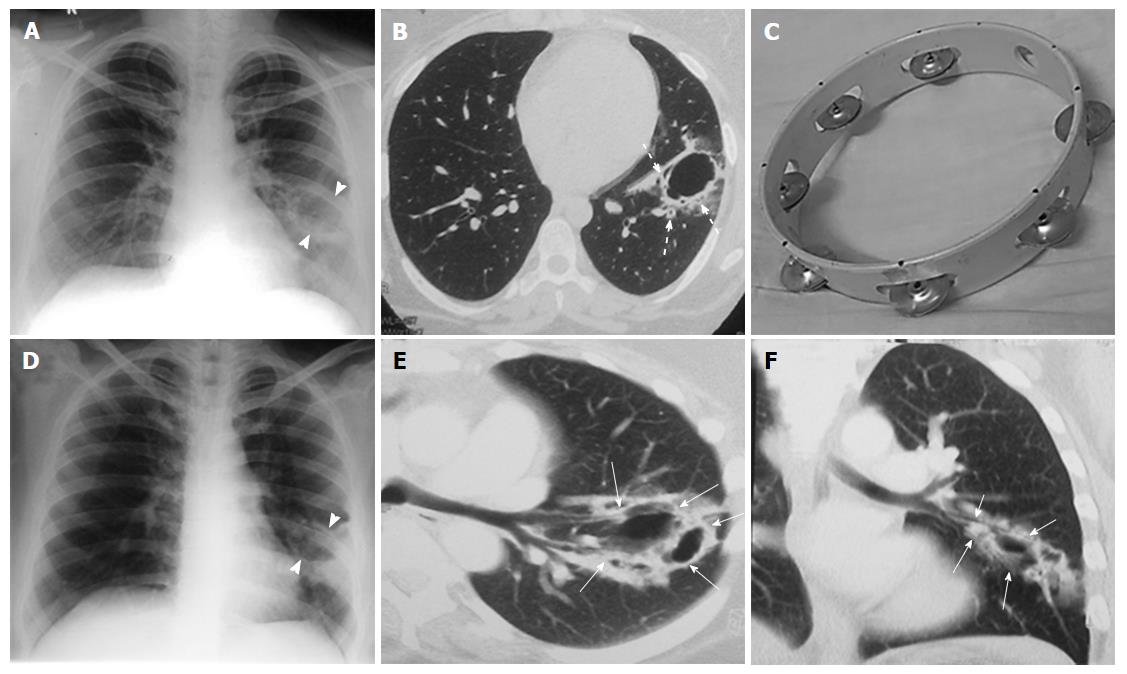 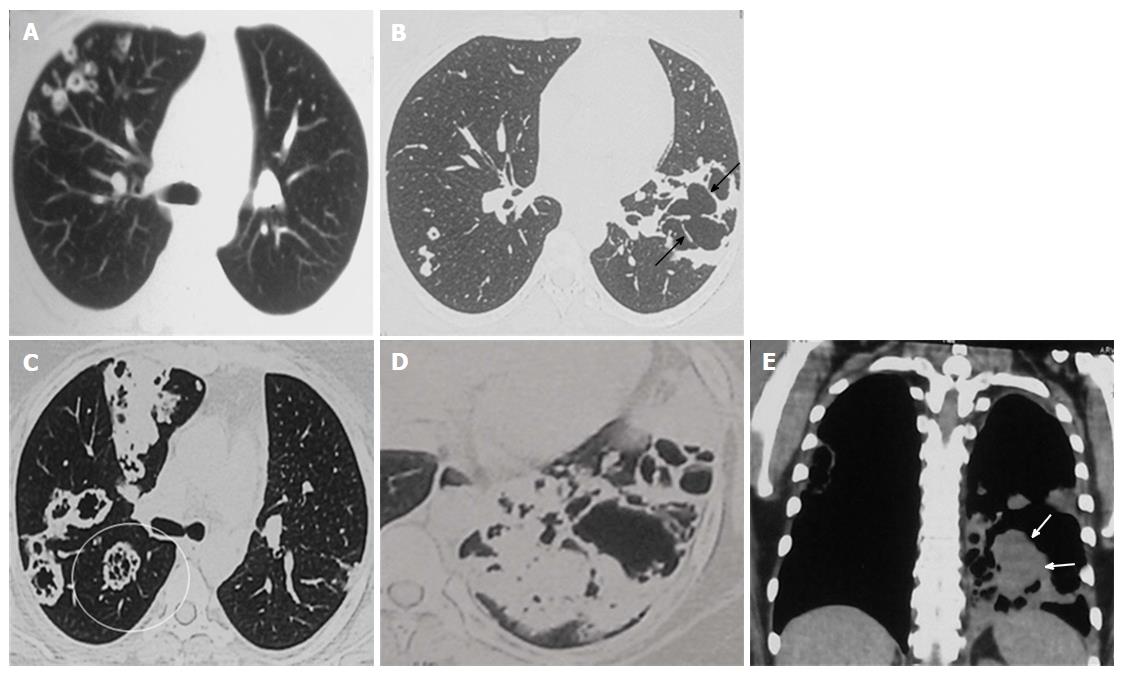 The laboratory investigations in the current admission were again non-contributory (Figure 1). Contrast-enhanced computed tomography (CECT) was done and it revealed multiple cavitary lesions in bilateral lungs with the largest in LLL showing large enhancing solid component. Many of the cavitary lesions in current CT showed a peculiar imaging appearance: Irregular inner and outer walls with thick walled bronchioles seen near the edge and within the walls of the cavities. No surrounding ground glass opacity (GGO) was seen in the current CT. There was no pleural effusion or mediastinal adenopathy. The included sections of upper abdomen were unremarkable.

Review of the prior imaging (Figures 2 and 3) demonstrated progression over the last six years. The lesion began (in 2008) as a thin-walled (4 mm) well-defined cavity in superior segment of LLL (Figure 2A-C). Both the inner and outer margins of the wall showed irregularity. Adjacent thick walled prominent undistorted bronchioles (dotted arrows) were seen near the edge and within the wall of cavity. Mild surrounding GGO was also seen. There was an additional smaller cavitating nodule in right upper lobe (RUL) with subtle surrounding GGO (not shown). Combining clinical and laboratory data, patient was presumed to have respiratory infection and treated for the same. Subsequent imaging in 2010 (Figure 2D-F) showed increase in size and wall thickness of the LLL cavity. Imaging done in 2012 depicted multiple new cavitating nodules in RUL (Figure 3A and B) and increase in size of LLL cavity, along with development of internal septations. No GGO or consolidation was seen and there was no solid component in any of these cavities.

Current CECT images showed further increase in the size of the lesions and development of significant soft tissue component in LLL cavity (Figure 3C-E). Many of the cavitary lesions in the current CT showed multiple internal septations. Considering disease progression and development of solid component, malignancy was kept as the first differential. Other possibilities included atypical infections (fungal, atypical mycobacterial, nocardia, etc.) and vasculitis. However, long disease course (approximately 6 years) was unusual for both infection and malignancy.

USG-guided biopsy was done from the LLL mass (solid component) that showed atypical glands in the background of abundant mucin with areas of frank invasion suggestive of well-differentiated IMAC (Figure 4A and B). Analysis for ALK and EGFR mutation was negative. 18F-FDG PET-CT was done to rule out lung metastasis from extrathoracic primary which did not reveal any other primary site and the lung lesions showed patchy foci of mild FDG uptake (Figure 4C). The patient was started on chemotherapy (Pemetrexed and Carboplatin) but she continued to progress and developed bone metastases and soon became bed-ridden.

Lung cavities are commonly encountered in routine radiology practice. While in most cases the distinction between benign and malignant cavities is straightforward, some of the lesions may pose a diagnostic challenge. Differential diagnosis of acquired cavitary lung lesions include pyogenic infections such as lung abscess, necrotising pneumonia, septic emboli; granulomatous infections like tuberculosis, fungal; vasculitis including granulomatosis with polyangitis (Wegener’s) and Churg Strauss; connective tissue diseases like rheumatoid disease, ruptured hydatid and malignancy. A constellation of imaging features including wall thickness, number of lesions, distribution/site, adjacent GGO/nodules/consolidation, satellite lesions, internal contents, fluid level and the background lung need to be considered to reach a diagnosis.

Amongst lung malignancies, squamous cell carcinoma is the most common type to present as cavitary mass while adenocarcinomas rarely show true cavitation due to lack of frank necrosis and relative preservation of lung architecture. Adenocarcinomas however show areas of pseudocavitation due to presence of air in the patent smaller bronchi and preserved intra-alveolar air[4]. IMAC is a special subtype of invasive adenocarcinoma lung that is more common in females, non-smokers and presents at a younger age. When these tumors are multifocal, they are frequently mutilobar and lower lobe predominance is seen[2,5].

On CT, IMAC usually appear as consolidation with air bronchogram (commonest) or multifocal solid and subsolid (ground glass) nodules or masses which tend to be bronchocentric[2,6]. Due to abundant mucin production, large areas of pseudocavitation may be seen. They have low FDG uptake[7] due to large amount of mucin and for same reason show less contrast enhancement frequently depicting the “CT angiogram sign”.

Previously IMAC was termed as Mucinous Bronchoalveolar Carcinoma however the term BAC has now been removed from recent adenocarcinoma classification. BAC by definition was for non-invasive tumors while IMAC though predominantly show lepidic spread, frequently have areas of frank invasion. GGO is an indicator of lepidic spread while the solid component correlates with invasion. IMAC are frequently EGFR negative and may show k-RAS mutation, therefore having a poorer prognosis[8].

IMAC presenting as cavity is rare and to the best of our knowledge only two cases have been described previously[9,10]. Cavitation in adenocarcinoma may be caused by obstruction of the distal bronchus by tumour cells creating a check-valve mechanism or alveolar rupture due to tumour proliferation or mucus retention[9]. A detailed review of the previously reported cases and all the imaging studies of our case enabled us to come up with a peculiar finding common to all, which we intend to refer to as the “Tambourine sign”.

“Tambourine” sign refers to an irregular cavitary lesion with adjacent thick walled undistorted bronchioles within wall of the lesion and adjacent to it. The appearance resembles the musical instrument tambourine where the irregular cavity wall corresponds to the ring of the instrument, while the thick walled dilated bronchioles within the wall correspond to the metallic jingles. The cavity wall itself though irregular, may not be thick (as in the initial CT in the index case). Prominent thick walled undistorted bronchi are caused by tumour cell infiltration and desmoplastic reaction. Presence of internal septations and surrounding GGO (indicating lepidic spread of the tumor) further increase the likelihood of malignancy in such a lesion. When viewed in retrospect, both of the previously described cases as well as our patient showed “Tambourine” sign in all the CT examinations.

Paucity of malignant cells in such large amount of mucin[11] may make IMAC difficult to detect on BAL cytology as well as on TBLB. Though adenocarcinomas are usually aggressive, unusually slow growing lesions have also been reported[12,13]. This along with other confounding factors (Table 1) delayed the diagnosis in the index case. Adenocarcinoma may develop in a pre-existing cavity; however the index case was likely to be harbouring malignancy right from the onset. This is because the LLL cavity showed suspicious features on the first CT itself (tambourine sign) and progressively increased in size and wall thickness on subsequent imaging, along with development of multifocal lesions. The unusual feature in our case was atypical radiological appearance of the lesion as a thin-walled cavity, repeated negative cytology/biopsy and unusual slow growth.

The purpose of this article is to highlight an additional radiological sign which could raise suspicion of malignancy in a lung cavity. An irregular cavitary lesion with adjacent thick walled undistorted bronchioles within wall of the lesion and adjacent to it (“Tambourine” sign) is suspicious for malignancy and needs extensive work-up even if the cavity is relatively thin walled. Internal septations, surrounding GGO, lower lobe location, multifocality, normal background lung without any obvious airway disease, fibrosis and scarring may further point towards underlying malignancy (IMAC), provided the work-up for other differentials is negative (as in our case). Any increase in size or wall thickness prompts aggressive management by early surgical removal even when repeated BAL or biopsy is negative (Table 2).

Was confusing and non contributory.

Premetrexed and carboplatin combination chemotherapy and radiotherapy for bone metastasis.

Being thin walled cavity with no significant soft tissue repeat biopsies may be negative hence surgical excision may be considered when extensive workup is inconclusive.

The cavity resembles “Tambourine” on computed tomography, that refers to the musical instrument seen as thin walled cavity in background of normal lung with prominent and thick walled undistorted bronchi draping and entering the cavity walls.

This imaging finding has been retrospectively observed in previous similar reported cases of Invasive mucinous adenocarcinoma presenting as cavity and hence the classical appearance need to be focussed and re-emphasised. Close follow-up is very helpful in such cases.