A 30-year-old woman was brought to the emergency room with sudden-onset, rapidly symmetrical flaccid weakness in the proximal lower extremity muscles after excessive intake of carbohydrates. She did not complain of nausea, vomiting, diarrhea, fever or rash, and there was no history of medication use, nor had she experienced any trauma or vigorous exercise. Her menstrual cycle was regular and she was married and nulliparous. The patient reported a history of 3 similar episodes of weakness in the past year. All episodes occurred after consuming excessive carbohydrates and drinking alcohol. Each time she was admitted to a hospital emergency room and muscle weakness improved after intravenous potassium administration. There was no detectable reason for her hypokalemia whenever she did it. Unusual point was her family history that included the sudden cardiac death of her father, paternal uncle and brother without determination of the exact cause. On physical examination, her blood pressure was 120/80 mmHg, heart rate was 78 beats/min and body temperature was 36.4 °C. Cardiopulmonary examination was unremarkable. Neurological examination revealed symmetrical flaccid muscle paralysis involving predominantly the thighs and calves, areflexia without sensory involvement and positive Trousseau sign. Initial laboratory investigations demonstrated markedly severe hypokalemia (K 1.6 mEq/L) with hypophosphatemia (phosphorus 0.8 mg/dL), while other routine chemistry including total calcium level, liver function and hematological laboratory values were normal. Plasma renin activity, aldosterone and thyroid hormone levels were within normal range (Table 1). ABG analysis revealed the following: pH 7.48, PaCO2 29 mmHg, PaO2 106 mmHg, bicarbonate 22.3 mEq/L and oxygen saturation 98.8%. This respiratory alkalosis was considered as results of hyperventilation due to her complaints. Urinary excretion of potassium was 2.5 mmol/L and urinary osmolarity was 326 mOsm/kg; the transtubular potassium gradient was 1.67. Blood and urine cultures were all negative, and serology for viruses including hepatitis B virus, hepatitis C virus, human immunodeficiency virus and resilient packet ring was also negative, so no recent infections were suspected. Electrocardiogram revealed a Q-T interval elongation pattern corresponding to hypokalemia-related changes (Figure 1). After 6 h of potassium administration, the patient suddenly developed tetany and a severe ache in both calves without corresponding physical exertion. Initially she complained only of weakness without pain, but she began to show new symptoms including severe muscle tenderness, myalgia. Also, her urine color changed to dark-brown, described as “tea-colored” and the amount of urine decreased. We suspected rhabdomyolysis and laboratory tests showed elevated creatine phosphokinase (45720 IU/L) and lactic acid dehydrogenase (LDH 1686 U/L) and low serum potassium (2.2 mmol/L) (Table 1). We sought to determine the cause of hypokalemic rhabdomyolysis using a step-wise approach. Rhabdomyolysis was accompanied by episodic muscle weakness with severe hypokalemia and no other causes, including thyrotoxicosis, hyperaldosteronism, renal loss or gastrointestinal loss. Based upon these clinical features, a diagnosis of primary hypokalemic periodic paralysis was made due to a positive family history of unexpected sudden cardiac death and hypokalemia during paralytic attacks without other detectable causes. We diagnosed the patient with rhabdomyolysis following severe hypokalemia caused by familial hypokalemic periodic paralysis. DNA analysis and muscle biopsy was planned for exact diagnosis (sporadic or familial), but we could not perform, because she refused further tests. After treatment via hydration, potassium replacement and medication with spironolactone, the patient’s creatine phosphokinase and potassium levels normalized and her symptoms improved. The patient described in the case report exhibited characteristic clinical features of rhabdomyolysis caused by profound potassium deficiency associated with primary hypokalemic periodic paralysis. 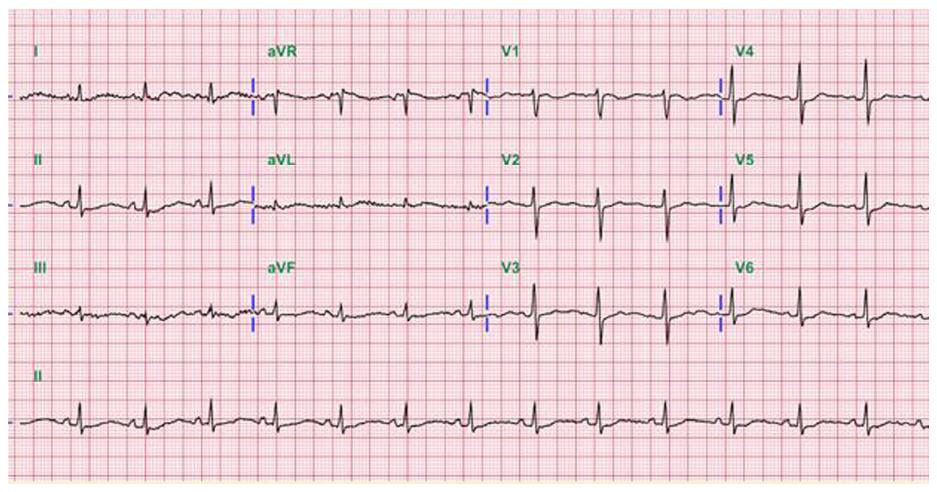 Rhabdomyolysis is a pathological condition involving skeletal muscle cell damage leading to the release of toxic intracellular material into the blood circulation. It ranges from an asymptomatic illness to a life-threatening condition associated with acute kidney failure, disseminated intravascular coagulation, and critical arrhythmia as complications of rhabdomyolysis[1]. There are multiple causes of rhabdomyolysis, which can be classified as physical (traumatic) and non-physical (nontraumatic) causes. One major cause of rhabdomyolysis is muscular trauma, and less common causes include muscle enzyme deficiency, electrolyte abnormality, infection, toxins, endocrinopathy, and drugs including β-mimetics, insulin, laxatives or diuretics such as thiazides. One of the most interesting causes of non-traumatic rhabdomyolysis is electrolyte abnormalities including potassium deficiency[2]. The mechanism of the hypokalemia-induced rhabdomyolysis is still not clear, but it may be related to the fact that hypokalemia may induce muscle injury or frank necrosis as a consequence of relative ischemia[4].

Potassium plays an important role in regulating muscle blood flow, and local potassium levels in capillaries are essential regulators of vascular tension. Changes in potassium distribution across the cellular membrane might affect excitability and contractile force of muscle tissue[3]. Normally during exercise, muscles release intracellular potassium, causing local pockets of hyperkalemia, which in turn trigger vasodilation and increase perfusion to active myocytes[3]. Effect of total body potassium depletion decreases local hyperkalemia preventing vasodilation and leads to tissue hypoxia. Severe hypokalemia contracts capillaries, reduces muscle blood supply and results in muscle cell damage[3,5]. The clinical manifestations of potassium depletion vary, because hypokalemia affects the function of several organs including cardiovascular system, neurologic system, muscles, and kidneys. The severity of the clinical symptom depends on the degree of hypokalemia, more severe hypokalemia may lead to progressive weakness, hypoventilation and even complete paralysis. Also, the occurrence of side effect (or complication) of hypokalemia, for example like rhabdomyolysis, is related to the severity of pre-existing potassium deficiency and the underlying disease state[5,6]. For the accurate treatment of these symptoms of hypokalemia, it requires correct identification of the cause. Among the various causes of hypokalemia, drugs such as diuretics, laxatives or insulin are the most common cause of potassium depletion, which induced by abnormal losses of potassium, or redistribution within cells. Thus, the first step in the management of hypokalemia is to review the patient’s drug record. In the absence of an inciting drug, hypokalemia can result from an acute shift of potassium from the extracellular compartment to cells, from inadequate intake, or from abnormal losses through the kidney and intestinal losses by diarrhea[3]. This diagnosis is readily made from the history under most conditions. In situations where the cause of hypokalemia is not obvious, measurement of urinary potassium excretion and blood pressure as well as assessment of acid-base balance are often helpful. In the presence of hypertension, Cushing syndrome or aldosteronism should be suspected in any patient with the triad of hypertension, hypokalemia and metabolic alkalosis[6]. Rare hereditary defects in renal salt transport, such as Bartter syndrome or Gitelman syndrome, can cause hypokalemia without hypertension in a manner similar to that of diuretics. Potassium loss can also occur due to diabetic ketoacidosis and renal tubular acidosis[7]. Severe hypokalemia can occur, although rarely, in association with thyrotoxicosis, resulting in a clinical syndrome characterized by the sudden onset of severe muscle weakness and paralysis[3]. Signs and symptoms of thyrotoxic periodic paralysis usually accompany acute episodic attacks of muscle weakness and paralysis, and it is clinically identical to hypokalemic periodic paralysis, so the misdiagnosis may be made[8,9].

Hypokalemic periodic paralysis leads to randomly-spaced attacks or episodes of weakness that range from mild to flaccid paralysis triggered by falls in serum potassium, and involve several or all of the skeletal muscles with complete recovery between attacks[8,9]. It is categorized as primary, due to a genetic defect with familial or sporadic occurrence or as secondary, due to drugs, suprarenal gland disease[9]. Primary hypokalemic periodic paralysis can be associated with mutations in genes encoding for subunits of the muscular sodium channel, calcium channel and potassium channel[8,10]. Diagnosis is based on patient history and can be confirmed by evaluation of serum electrolytes and transtubular potassium concentration gradient during an attack using the CMAP amplitude test (Exercise EMG) or by DNA analysis and muscle biopsy[9]. Negative DNA test results are not conclusive[10]. Triggers for paralysis may be a carbohydrate-rich diet such as consumption of sweet and starchy, alcohol or strenuous physical activity. Other precipitating factors include stress related to infections, menstruation, lack of sleep or certain drugs such as b-mimetics, insulin or corticosteroids[9]. Appropriate management includes a diet low in sodium and simple carbohydrates. Patients should avoid over-exertion and becoming chilled, and should take supplemental potassium. Acetazolamide is highly effective for prevention of paralytic attacks and some patients require potassium supplementation in order to achieve complete control of episodes. Acetazolamide is a carbonic anhydrase inhibitor, causing the accumulation of carbonic acid, however the mechanism of the therapeutic effects of the drug in hypokalemic periodic paralysis is not clear and appears to be independent of carbonic anhydrase inhibition. It is reported that acetazolamide is expected to trigger calcium-activated potassium channels on skeletal muscle and make sarcolemma channel activity intense, and restore the serum K+ levels to control values[11-14]. Patients who fail to respond to acetazolamide, may respond well to potassium sparing diuretics including spironolactone.

This case report has two limitations. First, genetic analysis and muscle biopsy for diagnostic confirmation was not done because of patient’s reluctance. However, it is known that negative result of genetic analysis and muscle biopsy are not conclusive, we could approach the final diagnosis based on the clinical course and family history of patient. Second, on the suspicious of rhabdomyolysis, myoglobin levels as a sensitive marker of muscle damage was not measured. However, tea-colored urine showed myoglobinuria, and it suggested that myoglobin was released into the circulation.

A 30-year-old woman, who had 3 episodic attacks of hypokalemic periodic paralysis was admitted in emergency room with sudden onset symmetrical muscle weakness. After several hours, she started to complain myalgia and severe ache in both calves without any changes.

Initial symptoms included episodic attacks of muscle weakness due to decreases in serum potassium. Later she complained myalgia and severe ache in both calves, and her urine color was changed to dark-brown.

Familial hypokalemic periodic paralysis is characterized by periodic attacks of muscle weakness due to decreases in serum potassium, caused by genetic defect of potassium-sensitive muscle membrane excitability with familial occurrence. Nontraumatic rhabdomyolysis is a polyetiological disease, and one of the most interesting causes is severe hypokalemia.

The paper is well-written.