The evidence in the medical literature on the efficacy and safety of rituximab therapy for primary glomerulonephritis is limited and controversial. We describe two male Caucasian patients with rapidly progressive kidney failure due to primary proliferative glomerulonephritis. Both of them received high-dose intravenous corticosteroids and oral cyclophosphamide with limited benefit. The first patient (hepatitis C virus-negative mixed cryoglobulinemia) underwent plasma-exchange with intravenous immunoglobulins; he showed significant benefit on kidney function (he became dialysis independent with serum creatinine going back to 1.6 mg/dL) after one rituximab pulse even if urinary abnormalities were still present. No improvement in renal function or urinary changes occurred in the second patient. Both these individuals developed sepsis over the follow-up, the first patient died two months after rituximab therapy. This report is in keeping with the occurrence of severe infections after rituximab therapy in patients with renal impairment at baseline and concomitant high-dose steroids.

Core tip: A small but growing body of evidence is emerging on the efficacy and safety of rituximab therapy for primary glomerulonephritis. Various authors have claimed that rituximab for glomerular diseases is effective and has minimal adverse effects. We report on two male Caucasian patients who were refractory to conventional immunosuppressive therapy; each of them received one rituximab pulse and developed sepsis over the follow-up, the first patient died two months after rituximab therapy. The risks (and the predictive factors) of severe infections in kidney patients on rituximab therapy are unclear and appear an area of active research.

Primary glomerulonephritis (GN) remains an important cause of end-stage kidney disease. Preliminary trials have recently shown the efficacy of rituximab for adult-onset primary GN[1]; rituximab being a genetically chimeric monoclonal antibody directed to CD20 antigen, a B-cell-specific transmembrane found on immature and mature cells, as well as on malignant B cells. Following treatment with rituximab (RTX), B-cells are prevented from proliferating, and undergo apoptosis and lysis through complement-dependent and - independent mechanisms. B-cell depletion usually persists for 6-9 mo in around 80% of patients, but the degree of depletion is greatly variable. Rituximab is currently approved for treating various malignancies including B cell non-Hodgkin’s lymphoma and chronic lymphocytic leukemia; also, it has been licensed for refractory rheumatoid arthritis, granulomatosis with polyangiitis (Wegener’s granulomatosis) and microscopic polyangiitis. Rituximab was expected to inhibit the production of autoantibodies involved in the pathogenesis of the disease without the toxicity of nonspecific immunosuppression. It has been the first monoclonal employed for the treatment of glomerular diseases and has been initially used for patients with membranous nephropathy but its use has rapidly spread to other glomerular diseases[1]. Membranous nephropathy and membranoproliferative GN are characterized by glomerular deposition of immune complexes; a crucial role of B cells in membranous (MN) and membranoproliferative glomerulonephritis pathogenesis through autoantibody production and antigen presentation has been mentioned. A small but growing body of literature is emerging on the benefits of rituximab in MN and membranoproliferative glomerulonephritis as primary treatment or as treatment of lesions refractory to other immunomodulatory regimens. In this setting, the drug appears to be well tolerated with small adverse events (Table 1)[2-8].

We report here our experience on rituximab use in two patients with progressive kidney failure due to primary proliferative GN. Both of them received conventional immunosuppressive therapy with limited benefit on urinary and biochemical abnormalities; then, they underwent one RTX pulse but developed sepsis over the follow-up. A brief review on the safety and efficacy of rituximab for primary GN has been also added.

A 51-year-old Caucasian male patient was admitted to hospital for two-week’s duration of abdominal pain with vomiting and diarrhoea. His medical history included arterial hypertension and symptomatic hepatitis C virus (HCV)-negative mixed cryoglobulinemia (since three years) with recurrent purpura and peripheral neuropathy at the lower extremities. Skin biopsy had shown leukocytoclastic vasculitis whereas neurological evaluation had revealed mono-neuritis at the left foot with axonal ischemic damage, probably related to cryoprecipitable immune complexes in the vasa nervorum. He had received low dose oral corticosteroids and azathioprine with partial control of cutaneous and neurological abnormalities. A bone marrow biopsy had reported no evidence of malignant lymphoma, and a small expansion of B lymphocytes (10%-15%). 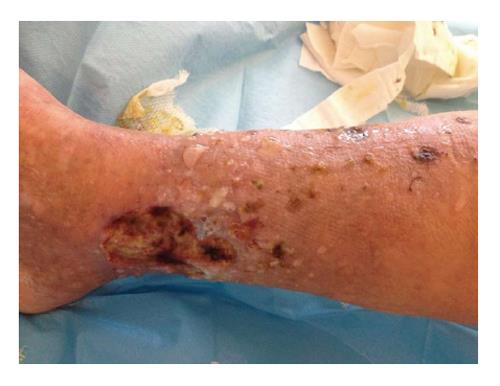 Figure 1 Purpuric rash with ulcers at the leg (patient 1).

Renal biopsy was not performed due to anatomic reasons, and a diagnosis of essential MC with rapidly progressive renal failure due to nephritic/nephrotic syndrome was made. Treatment was initiated with intravenous methylprednisolone (600 mg/d for three days), oral prednisone (50 mg/d on taper), and oral cyclophosphamide (100 mg daily). The progressive deterioration of kidney function (serum creatinine raised to 6.3 mg/dL, blood urea nitrogen to 279 mg/L) led us to make sequential plasma-exchange (nine sessions) and high-dose intravenous immunoglobulins (five procedures); in addition, hemodialysis was started. We observed healing of skin ulcers and improvement of neuropathic pain; GI disorders disappeared but immunosuppressive therapy was complicated by Clostridium Difficile-positive diarrhea, which was successfully treated with oral vancocine. Due to the persistence of severe renal failure (serum creatinine of 4.2 mg/dL), he received one infusion of RTX (375 mg/m2) off-label (Figure 2); by day 6 of the RTX dose, an improvement of urine output occurred. Since then, serum creatinine went back to 1.6 mg/dL, and blood urea nitrogen to 104 mg/dL. At discharge from the hospital, his medications included oral steroids, rabeprazole, amlodipine, furosemide, calcium carbonate, gabapentine, and darboepoetin. 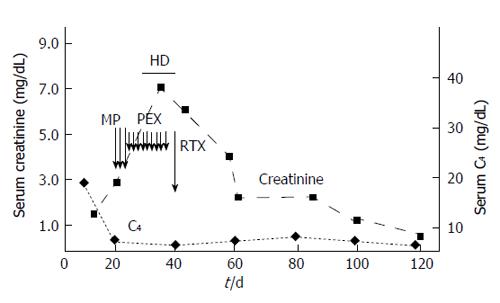 Two weeks after hospital discharge, serum creatinine was 1.76 mg/dL, blood urea nitrogen, 86 mg/dL, serum albumin 2.5 g/dL; severe and dysmorphic hematuria and non-nephrotic proteinuria (1.43 g/L) being still present. Low white blood cell count after RTX administration (3.4 × 103/mmc) occurred. According to flow cytometry, CD20+ B cells were 19% of total peripheral blood lymphocytes (before RTX) and fell to 1% (after RTX, since day 6) with no increase over the following weeks.

We report here on two patients with rapidly progressive renal failure due to idiopathic proliferative GN who were resistant to conventional immunosuppressive therapy. Both the patients underwent rituximab treatment in off-label condition, RTX infusion was well tolerated by both the patients but sepsis developed over the follow-up, fatal course occurring in patient 1. Numerous case reports and case series have suggested that the addition of rituximab to standard chemotherapy for malignant lymphoma increases the risk of viral infections such as varicella zoster[9], cytomegalovirus[10], HBV[11], parvovirus[12], and enteroviral encephalitis[13]. The risk of HBV reactivation has been added to the existing Boxed Warning of the rituximab label by the Food and Drug Administration in 2013[14]. Impaired immunity against non-viral pathogen agents such as Pneumocystis jirovecii[15] or cryptococcus[16] after rituximab therapy has been also noted.

A recent systematic review and meta-analysis has shown that rituximab plus standard chemotherapy for malignant lymphoma increases the incidence of severe leucopenia (RR = 1.24; 95%CI: 1.12-1.37) and granulocytopenia (RR = 1.07; 95%CI: 1.02-1.12) even if the overall risk of severe infections has not been increased (RR = 1.0; 95%CI: 0.87-1.14)[17]. We have already reported on a case of cholestatic hepatitis C after rituximab therapy for gastric cancer in a renal transplant recipient[18]. On the other hand, various authors have claimed that rituximab use for glomerular diseases is effective and has minimal adverse effects (Table 2)[1,19,20].

Our first patient presented idiopathic cryoglobulinemic vasculitis which has undefined therapeutic management[21]. There is some evidence on the efficacy and tolerance of RTX in patients with HCV-associated mixed cryoglobulinemia vasculitis who were naïve, resistant or intolerant to antiviral therapy[22-25]. Two randomized controlled trials have compared RTX with conventional immunosuppressive therapy for HCV-related mixed cryoglobulinemia vasculitis[26,27]. As listed in Table 3, evidence in the medical literature on RTX use among patients with non-infectious cryoglobulinemia vasculitis targeting kidneys is extremely limited, and a total of 16 cases were retrieved[28-37]. Patient 1 gives emphasis on the efficacy of RTX, as one RTX pulse made possible the control of renal disease: kidney function normalized, nephrotic syndrome disappeared and only nephritic urinary changes persisted. However, RTX use was complicated by sepsis a few weeks after RTX pulse. On the basis of the evidence reported in Table 3, severe infections after RTX treatment are not uncommon [35% (6/17)].

RTX therapy in patients with nonviral cryoglobulinemia vasculitis or membranoproliferative GN raises various questions such as the role of RTX as first-line or rescue therapy, the efficacy/safety of maintenance therapy with RTX, and the tolerance to RTX. In the absence of randomized controlled trials, such questions remain unanswered; as an example, the poor tolerance of our patients after RTX administration remains unclear. The French multicenter CryoVas survey retrospectively evaluated 242 patients with non-infectious mixed cryoglobulinemia vasculitis, RTX plus corticosteroids had greater therapeutic efficacy compared with corticosteroids alone and corticosteroids plus alkylating agents[38]. However, RTX plus corticosteroids was associated with more frequent infections than corticosteroids alone (HR = 9; 95%CI: 3.1-20, P < 0.001). Prospective data from the AIR (AutoImmunity and Rituximab) registry, which includes data on patients treated with rituximab off-label, have shown that among patients (n = 23) with nonviral cryoglobulinemia vasculitis on RTX, side-effects occurred in almost half of the patients (n = 11), including severe infections[34]. Infectious episodes were mostly reported in a patient subgroup (age > 70 years, essential type II MC, GFR < 60 mL/min, and high-dose steroids) and were fatal in many (n = 3)[34]. Both our patients had important kidney impairment at baseline and concomitant therapy with intravenous high-dose corticosteroids, among other immunosuppressive agents.

The current study calls for further research on the RTX-based treatment of essential cryoglobulinemic vasculitis or membranoproliferative GN but the low frequency of patients in individual centers would make randomised controlled trials extremely difficult. Rituximab has surfaced as potential treatment option for some primary glomerular diseases and the HCV KDIGO Study Group[39] had already included rituximab among the recommended drugs (steroids, and cyclophosphamide) for the immunosuppressive treatment of HCV-associated kidney disease. The risks (and the predictive factors) of infections in kidney patients on RTX-therapy are not yet understood and are an area of active research. These patients should be monitored over the follow-up to avoid the occurrence of infectious episodes.

At presentation serum creatinine ranged between 2.5 and 2.9 mg/dL and proteinuria 3.6 and 9.2 g/d, microscopic haematuria with dysmorphic erythrocytes and red cell casts.

Both the patients received one infusion of rituximab (375 mg/m2) off-label.

Various authors have claimed that rituximab use for glomerular diseases is effective and has minimal adverse effects.

Phase-contrast microscopy is a microscopy technique to analyze the morphology of urine erythrocytes.

The risks and the predictive factors of severe infections in kidney patients on rituximab therapy are still unclear and appear an area of active research.

It is a good article.