With the term “oncological screening”, we define the overall performances made to detect early onset of tumors. These tests are conducted on a population that does not have any signs or symptoms related to a neoplasm. The whole population above a certain age, only one sex, only subjects with a high risk of developing cancer due to genetic, professional, discretionary reasons may be involved. Screening campaigns should be associated, when risk factors that can be avoided are known, with campaigns for the prevention of cancer by means of suitable behavior. The goal of cancer screening cannot however be limited to the diagnosis of a greater number of neoplasms. Screening will be useful only if it leads to a reduction in overall mortality or at least in mortality related to the tumor. Screening should then allow the diagnosis of the disease at a stage when there is a possibility of healing, possibility that is instead difficult when the disease is diagnosed at the appearance of signs or symptoms. This is the reason why not all campaigns of cancer screening have the same effectiveness. In Italy, every year there are about 150000 deaths due to cancer. Some of these tumors can be cured with a very high percentage of success if diagnosed in time. Cervical cancer can be diagnosed with non-invasive tests. The screening test used all over the world is Papanicolaou (Pap) test. This test may be carried out over the entire healthy population potentially exposed to the risk of contracting cancer. Public health has begun the screening campaigns in the hope of saving many of the approximately 270000 new cases of cancer reported each year. Screening is done following protocols that guarantee quality at the national level: these protocols are subject to change over time to reflect new realities or to correct any errors in the system. A simplified sketch of a possible route of cancer screening is as follows: (1) after selecting the target population, for example all women between 25 and 64 years (in the case of monitoring of cervical cancer), an invitation letter with the date and time of the appointment, planned according to the acceptance capacity of the hospital, is sent to all individuals; (2) an examination, which depending on the individual and the type of cancer to be monitored, for example, can be a Pap smear, is performed and the patient can go home; (3) once available the results of examinations, if negative, they shall be communicated to the person concerned that will be notified by mail and will be recalled for a second test at a few years of distance, in the case of non-negativity, instead, the patient is contacted by telephone and informed of the need to carry out further examinations: it is said that the patient is in the “phase two” of the screening pathway; (4) in phase two, reached by only a small portion of the interested parties (usually less than 3%-5%), more in-depth tests are carried out, which, depending on the individual and the type of cancer, can be: cytological and colposcopic examinations, the removal of a fragment of tissue (biopsy) and subsequent histological examination, additional tests such as ultrasound, radiography, or others such as computerized tomography, magnetic resonance imaging, positron emission tomography, etc., in case of negativity, the concerned person will be called for new control tests at a a few years of distance, in case of non-negativity, it will be proposed instead an oncologic therapeutic plan and/or surgery to treat the diagnosed tumor; and (5) once the treatment plan is completed, the individual enters the follow-up protocol, which is monitored over time to see if the tumor has been completely removed or if instead it is still developing. Cervical cancer is undoubtedly the most successful example of a cancer screening campaign. Paradoxically, its effectiveness is one of the strongest reasons to criticize the usefulness of vaccination against human papillomavirus (HPV) in countries where the screening service with Pap test is organized in an efficient manner. Cervical cancer screening protocols are directed to sexually active women aged 25-64 years: they provide the Pap test performed by examining under a microscope or by staining with a specific “thin prep” the material taken from the cervix with a small spatula and a brush. It is recommended to repeat the test every two or three years. It is important to emphasize that women vaccinated against HPV must continue the screening with Pap test. Although some screening programs (e.g., Pap smears) have had remarkable success in reducing mortality from a specific cancer, any kind of screening is free from inherent limitations. The screening methods are in fact applied to large parts of the apparently healthy population. In particular, the limits for certain cancers may be as obvious as to prohibit the introduction of an organized screening program. Potential limitations of organized screenings are basically of two types: organizational and medical. The limits of organizational type relate to the ability of a program to recruit the whole target population. Although well organized, a screening program will hardly be able to exceed a coverage of 70%-80% of the target population, and in fact the results of the current programs are often much smaller. The limits of medical type are represented by the possibility of reducing the overall mortality, or specific mortality, using a specific screening campaign.

Core tip: Most cases of cervical cancer are preventable and, if caught early, highly curable. Despite this, cervical cancer is the second most common cause of cancer death and a leading cause of morbidity in women worldwide. Unfortunately, cure is less likely when the disease is diagnosed at an advanced stage. Although the human papillomavirus is considered the major causative agent of cervical cancer, yet the viral infection alone is not sufficient for cancer progression.

Human papillomavirus (HPV) belongs to the diverse group of sexually transmitted viruses that manifest affinity to the squamous epithelia of the skin and mucous membranes. It has been proved that types 16 and 18 in particular could lead to cervical cancer. High-risk strains of HPV (HR-HPV) types have been found in cervical cancer worldwide[1]. The Papanicolaou (Pap) smear was the mainstay of screening in women for over 60 years[2]. All current guidelines recommend colposcopy for women with high-grade squamous intraepithelial lesions (H-SIL), with a view to performing a biopsy or conization. Randomized controlled trials and retrospective comparisons much more strongly suggest that regular well-organized smear testing prevents a number of deaths due to cervical cancer. It should be remembered that many cellular atypia found on cervical smears never progress to cancer. The frequency of overdiagnosis has not been studied. Smear-based screening appears to have very few serious adverse effects. In practice, despite the lack of solid evidence, it seems unreasonable not to recommend screening for cervical cancer. Organized screening is preferable to opportunistic screening performed without quality controls and without research to optimize screening strategy[3,4]. The available technology for prevention and its developments allows real opportunities for cervical cancer elimination in defined populations to be foreseen[5-8]. 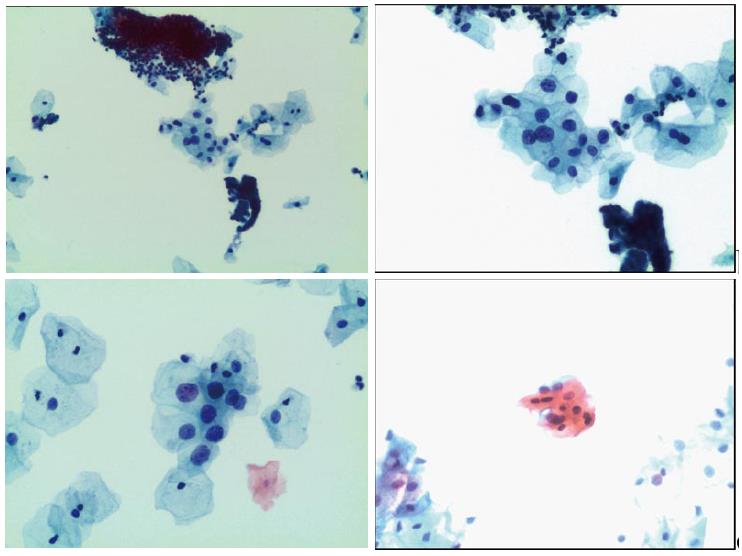 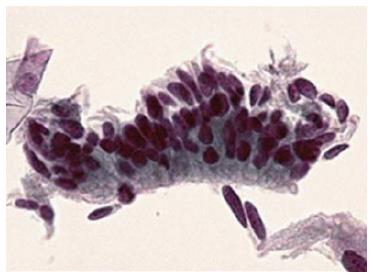 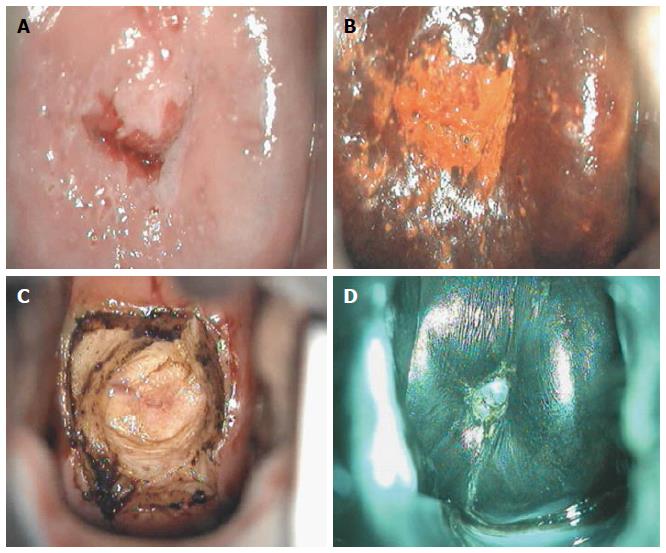 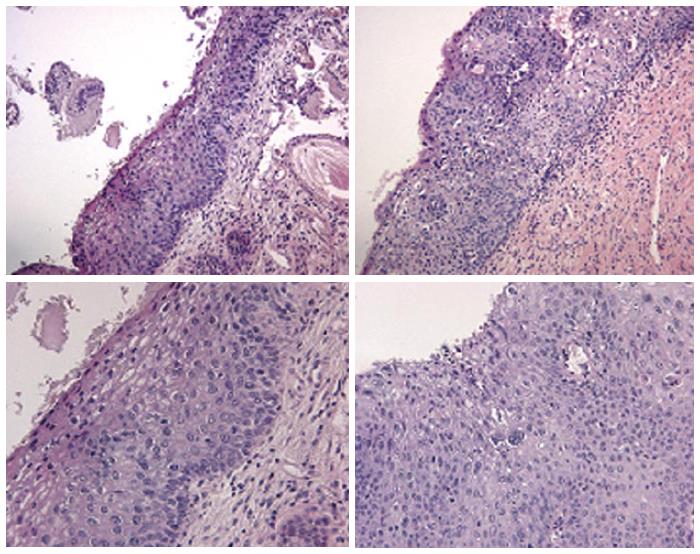 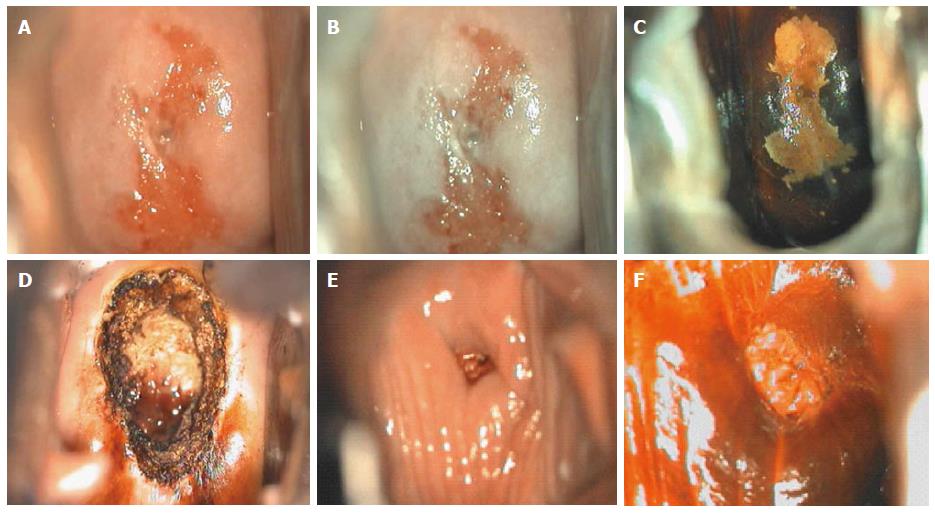 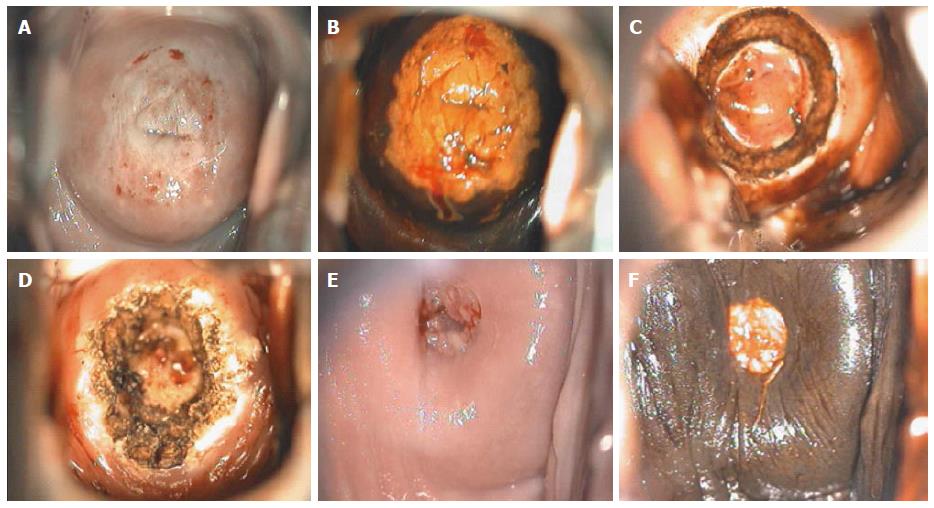 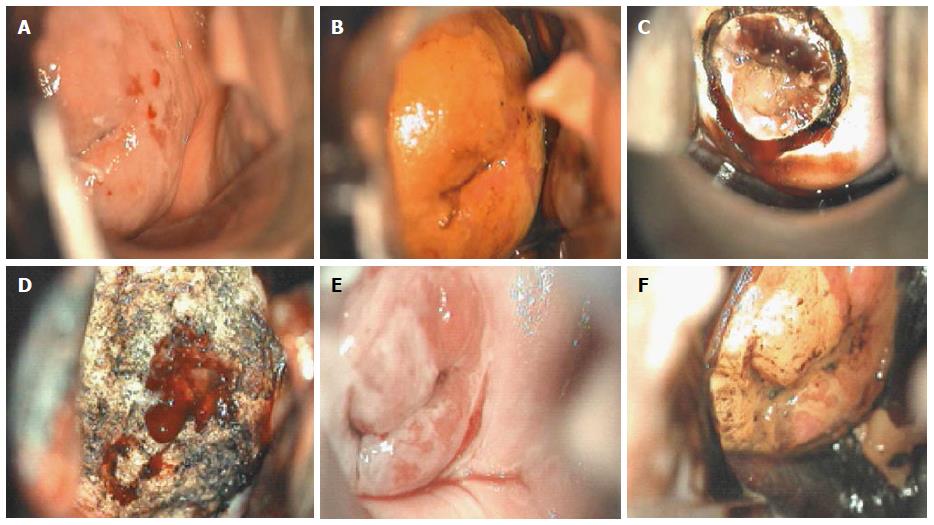 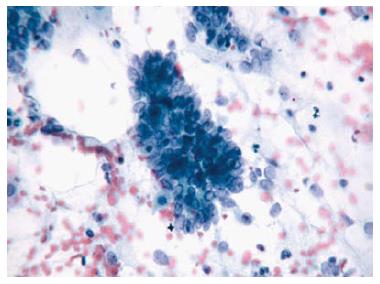 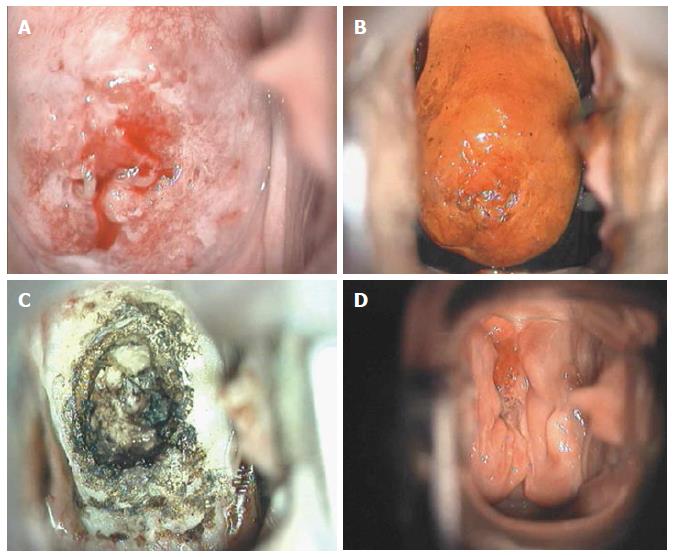 Pre-cancerous lesions of cervix (CIN) are usually treated with excisional or ablative procedures. In the United Kingdom, the National Health Service cervical screening guidelines suggest that over 80% of treatments should be performed in an outpatient setting (colposcopy clinics). Treatment methods commonly used for precancerous lesions are conization, loop electrosurgical excision procedure (LEEP), laser ablation, and cryotherapy. Recently, outpatient LEEP has replaced cryotherapy in many countries. However, a greater awareness of the importance of cervical cancer in the developing world and a greater awareness of the long-term consequences of LEEP like cervical insufficiency, have renewed interest in cryotherapy. Among the trials, cure rates ranged from 56.8% to 96.6% in prospective controlled studies and from 70% to 95.5% in observational trials. Cryotherapy has very low rates of complication and serious complications that require medical therapy or affect the reproductive future results are extremely rare. Side effects include vaginal discharge and cramping which are temporary, usually self-limited, and well tolerated after preventive patient counseling. When surveyed, women highly accept cryotherapy. Compared to other methods of treatment, cryotherapy is very affordable and feasible to integrate screening programs and treatment for cervical cancer[23]. Often, due to improper judgment of interventional indications for cervical lesions, overtreatment to various degrees takes place, influencing patients’ health and lives[24,25].

Cytopathology experts, interested stakeholders, and representatives from the College of American Pathologists (CAP), the Centers for Disease Control and Prevention, the American Society of Cytopathology (ASC), the Papanicolaou Society of Cytopathology, the American Society for Clinical Pathology, and the American Society of Cytotechnology convened the Gynecologic Cytopathology Quality Consensus Conference to present preliminary consensus statements developed by working groups, including the Cytologic-Histologic Correlations Working Group 4, using results from surveys and literature review. Conference participants voted on statements, suggested changes where consensus was not achieved, and voted on proposed changes. To document existing practices in gynecologic cytologic-histologic correlation (see the Bethesda System cytologic reports in Table 1), to develop consensus statements on appropriate practices, to explore standardization, and to suggest improvement in these practices, the material is based on survey results from US laboratories, review of the literature, and the CAP Web site for consensus comments and additional survey questions[26-30].

Vaccination against HPV is expected to decrease the incidence of cervical cancer in most countries. However, it is also expected to influence the effectiveness of screening. In the future, maintaining Pap test as the primary test for cervical screening may become too expensive. As the prevalence of cervical dysplasia decreases, the positive predictive value of citology also decrease, and consequently, more women will undergo unnecessary diagnostic procedures and follow-up. The HPV deoxy ribonucleic acid (DNA) test has recently emerged as the best tool to replace cytology as primary screening. It is less subjected to human errors and much more sensitive than the Pap test in detecting high-grade cervical lesions. By incorporating this test the overall quality of screening programs will improve and will allow spacing out the screening tests, while maintaining safety and reducing costs. Although HPV testing is less specific than Pap test, this problem could be solved by reserving the latter for triaging cases of HPV positivity. Since most HPV-positive smears contain significant anomalies, Pap cytology is expected to perform with sufficient accuracy in these cases. Pap triage of HPV-positive patients would also provide a low-cost strategy to monitor the effectiveness of the vaccine in the long term. Although HPV typing could be implemented as a screening tool for the population, further research is needed to determine the optimal age to begin screening, the role of the HPV test and other markers of disease progression, and adequate follow-up procedures for the HPV-positive and smear-negative women[31-33].