The present letter to the editor is related to the study titled “Gallstone associated celiac trunk thromboembolisms complicated with splenic infarction: A case report’’. Although gallstones are relatively common diseases, its association with thromboembolism is not fully understood. We aim to emphasize the potential mechanism of this relationship in this letter. In addition, we wanted to contribute to the causes of the spleen infarction and celiac trunk pathologies.

Core Tip: This letter to editor serves to present additional information regarding relationship between gallstone and thromboembolic disorders. We also emphasized some rare and interesting causes of splenic infarction and celiac trunk pathologies.

We read the article ‘’ Gallstone associated celiac trunk thromboembolisms complicated with splenic infarction: A case report’’[1] and appreciated them for the interesting and educational case report. Gallstones can presented with uncommon symptoms such retrosternal, solely epigastric, or left upper quadrant pain which can cause diagnostic challenges[2]. So we wanted to contribute the article by highlighting a few diseases that could cause confusion in the differential diagnosis. Besides, we also aimed to contribute to the differential diagnosis of spleen infarction observed in the case report.

In the literature, there are some studies that are compatible with the case report in terms of demonstrating the association between gallstones and vascular thromboembolism. A study of Chen et al[3] revealed that the presence of gallstones increased the risk of venous thromboemboli (VTE), including deep venous thrombosis and pulmonary emboli, 1.35-fold, and the risk of VTE decreased after cholecystectomy. They also stated that gallstones may be considered a risk factor for VTE. In addition, Chiu et al[4] revealed an increased association of extrahepatic portal vein thrombus and the presence of gallstones in children. According to studies, there is an association between the presence of gallstones and vascular pathologies. Although this association, gallstones should not be considered as an initial diagnose because accompanied diseases could be predisposing factor such as malignancies and coagulation disorders. So predisposing factors should be excluded before confirmation of the diagnosis of gallstone associated thromboembolism. Moreover; pathologies of the celiac trunk, other than gallstone related thromboembolism, can cause similar clinical scenarios with the presented. For instance, epigastic pain may be the only sign of another rare pathology; spontaneous solitary celiac and superior mesenteric artery dissections[5].

Splenic infarction represents a rare disorder that is frequently overlooked as the clinical findings could resemble those of other acute abdominal disorders[6]. Patients can be presented with symptoms including left upper quadrant pain, fever, tachycardia, nausea, and vomiting. Splenic infarction can also be detected during the evaluation of a concominant pathology[7]. The most frequent causes in non-traumatic patients are hematological disorders, septic embolism, cardioembolic diseases, and hypercoagulability[6]. Splenectomy is usually not required in the treatment, but segmental splenectomy can be applied because the lobar branches of the splenic artery do not anastomose with each other. However, the blood flow can be totally obstructed in the case of a wandering spleen because of the instability[7]. Therefore, splenopexy is recommended in these patients to prevent from infarction[8] (Figure 1). 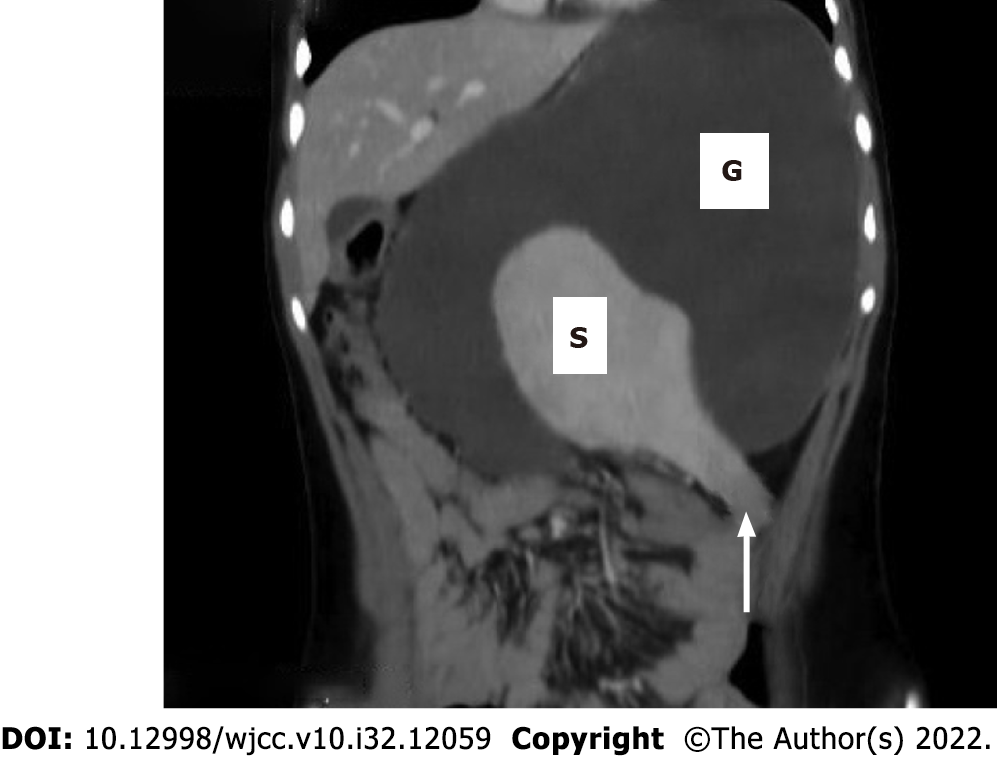 Figure 1  The patient has both a wandering spleen (S) and a gastric volvulus (G). There is also a focal hypoattenuation which represents a parenchymal infarct in the lower pole of the spleen (arrow).

Finally, although gallstones are relatively common, they may cause atypical presentations as in this case report. In literature, some studies have demonstrated that gallstones are a risk factor for thromboembolic disorders. Physicians should take thromboembolic processes into account when evaluating patients for gallstones. Besides, there are several causes of splenic infarction and sometimes it can be clinically nonspecific. Therefore, it should be considered in the differential diagnosis in patients with upper abdominal pain.