The present work discusses the serious confusion resulting from the arbitrary nomenclature of heart failure with preserved ejection fraction (HFpEF), the presumed underlying pathophysiology, and the supposed features. A consequence of this misconception is that HFpEF trials have recruited patients with entirely different characteristics rendering the extrapolation of the results of one study to the other infeasible and dramatically affecting diagnosis and treatment.

Heart failure with preserved ejection fraction (HFpEF) [heart failure (HF) with preserved left ventricular ejection fraction (LVEF)] has been defined as HF in the presence of LVEF usually > 40%-55%. However, this HF type raises serious confusion resulting from the arbitrary nomenclature, the presumed underlying pathophysiology, and the supposed features, all of which dramatically impact patient management[1]. The nomenclature HFpEF is inappropriate as several recent studies have shown that the hazard ratios for mortality during follow-up have a U-shaped relationship for echocardiographically determined LVEF with a nadir of risk at a LVEF of 60%–65% regardless of the presence or absence of HF[2]. As a result, HF with a “supernormal” LVEF has been proposed and a HF patient with a LVEF of 45% or 50% has an abnormal and not a “preserved” LVEF. HFpEF has been attributed to a systemic proinflammatory state induced by comorbidities, including overweight/obesity, diabetes mellitus, chronic obstructive pulmonary disease, and salt-sensitive hypertension[3]. A major drawback of this conjecture, which has proved disappointing in HFpEF management, is that the relative independent contribution of the individual comorbidities to the inflammatory state, which characterizes HFpEF, has never been considered. HF is a heterogeneous syndrome in which functional and structural parameters change dynamically during disease progression in a patient-specific fashion. Therefore, HF can be regarded as a spectrum of phenotypes. Each HF phenotype is the result of a patient-specific trajectory wherein the heart remodels towards concentric hypertrophy (i.e. HFpEF), eccentric hypertrophy (i.e. HF with reduced LVEF), or a combination of both. The way of entry and the subsequent path of the trajectory depend on the patient’s risk factors, comorbidities, and disease modifiers[4,5]. Likewise, there are uncertainties regarding the widely adopted foundational features of HFpEF such as phenotypic persistence and phenotypic heterogeneity. Phenotypic persistence, which denotes the lack of significant changes in LVEF over time, is a prerequisite for establishing HFpEF as a distinct LVEF based HF phenotype[6]. However, several recent studies have demolished this conjecture. It is, therefore, not surprising that the 2022 American College of Cardiology/American Heart Association HF guidelines recommend the serial assessment and reclassification of HF trajectories based on the LVEF, ejecting the “phenotypic persistence” dogma from the frame[7]. Phenotypic heterogeneity is usually present in genetic diseases and describes the fact that even within the same family where all affected individuals share the same mutation, phenotypic variation is prominent, with variable penetrance and expressivity, presenting different degrees of involvement. A typical example is familial hypertrophic cardiomyopathy, one of the HFpEF causes, in which members of the same family may exhibit different patterns and/or severity of LV hypertrophy. In addition, phenotypic heterogeneity often occurs and in complex diseases, like coronary artery disease (CAD). In CAD a spectrum of phenotypes is observed related among others to disease onset and stability (e.g., acute, or stable, recent onset or chronic, fatal, or not), extent of coronary lesions (e.g., number of vessels involved, plaque composition and burden) and the severity of LV structural and functional abnormalities (e.g., presence of LV dysfunction or lack thereof)[8,9]. Unfortunately, the term phenotypic heterogeneity has been erroneously used in HFpEF to denote the inclusion under the HFpEF umbrella of several distinct disease entities such as hypertension, valvular heart disease, hypertrophic cardiomyopathy, and amyloidosis. A consequence of this misconception is that HFpEF trials have recruited patients with entirely different characteristics rendering the extrapolation of the results of one study to the other infeasible and dramatically affecting diagnosis and treatment. For example, it would be irrational to extrapolate the findings of the recently published Empagliflozin Outcome Trial in Patients With Chronic Heart Failure with Preserved Ejection Fraction (EMPEROR-Preserved Trial)[10], which reported a benefit with Empagliflozin (compared with placebo) in hypertensive HFpEF (hypertension present in more than 90% of participants), to the HFpEF patients enrolled in other studies many of whom suffered from valvular heart disease or hypertrophic cardiomyopathy[6]. It has been suggested that in the realm where machine learning (ML) algorithms may aid in our understanding of phenotypically heterogeneous diseases, HFpEF may be an ideal domain in which to apply ML. ML is based on neural networks which are series of nodes or artificial neurons that are processing elements forming a series of hidden layers. Within each node there is a set of inputs, weight, and a bias value. As an input enters the node, it gets multiplied by a weight value and the resulting output is either observed or passed to the next layer in the neural network. In other words, weight is the parameter within a neural network that transforms input data within the network's hidden layers. Recent studies have reported the promising role of ML for the identification of HFpEF as well as its distinct phenotypic subgroups[11-13]. Nevertheless, further research is needed to establish these findings in larger cohorts. In summary, HFpEF predominantly represents a group of distinct diseases and not a specific HF phenotype which exhibits phenotypic heterogeneity. Moreover, even in patients with the same underlying cause (e.g., hypertension) the “preserved“ LVEF may drop significantly adversely affecting prognosis and necessitating treatment changes. It is obvious that in these cases HFpEF merely represents a disease stage (e.g., a stage of hypertensive HF). Whether a conglomerate of diseases or a disease stage, the continuing use of HFpEF as a distinct HF phenotype leads HF research and management to a dead end (Figure 1). 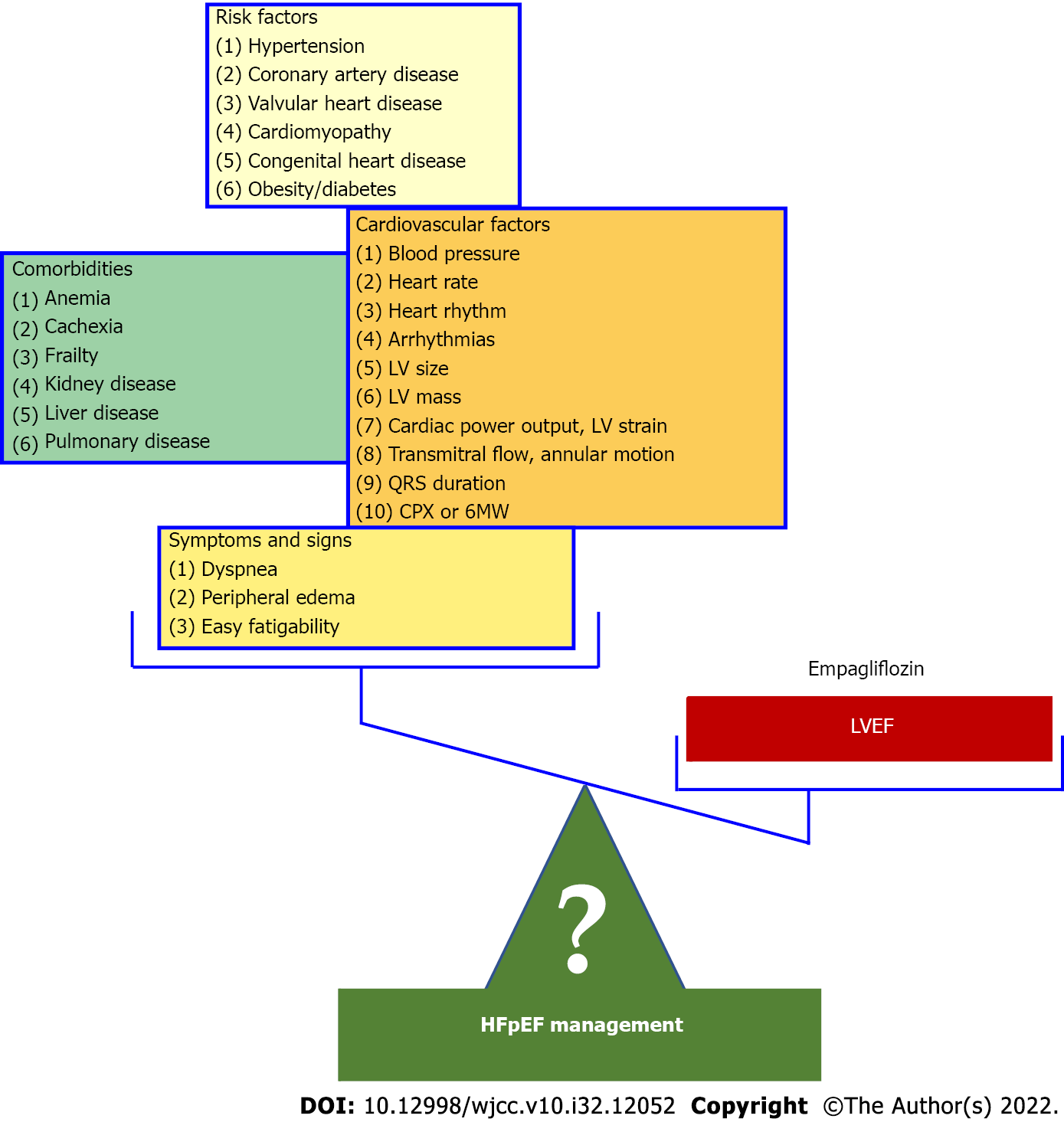