An endodontic microscope and CBCT are useful in effectively identifying and treating root canal variations.

Root canal treatment (RCT) is currently the most widely used endodontic procedure and has been effective against apical periodontitis and pulpitis. Furthermore, RCT is performed to completely treat the infection in the root canals and seal canals tightly to preserve the affected tooth. However, this procedure can also fail due to inadequate removal of the infected pulp, insufficient filling, or missed root canals due to anatomical variations[1]. Therefore, the diagnosis and localization of variant root canals are crucial to RCT's success.

At present, advanced technology and machines have been useful in clinical and dental treatments. In particular, the cone-beam computed tomography (CBCT) and the endodontic microscope have greatly improved the therapeutic effect of RCT.

A 39-year-old woman presented to the Department of Adult Dentistry for endodontic treatment. The chief complaint of the patient was pain in the maxillary right region for the past 1 year.

The patient reported occasional pain in the maxillary right region for 1 year. Three months prior to visiting our department, she had received tooth-filling treatment for the right maxillary first molar from another clinic. Recently, the patient experienced severe pain that occurred under hot or cold stimulation.

The patient had received tooth-filling treatment of the right maxillary first and second molars.

The patient denied any history of systemic diseases and allergies.

No laboratory examinations were necessary.

A preoperative digital panoramic radiograph taken 3 mo ago revealed carious lesions in the mesio-occlusion of the right maxillary first molar, which was close to the pulp (Figure 1A). 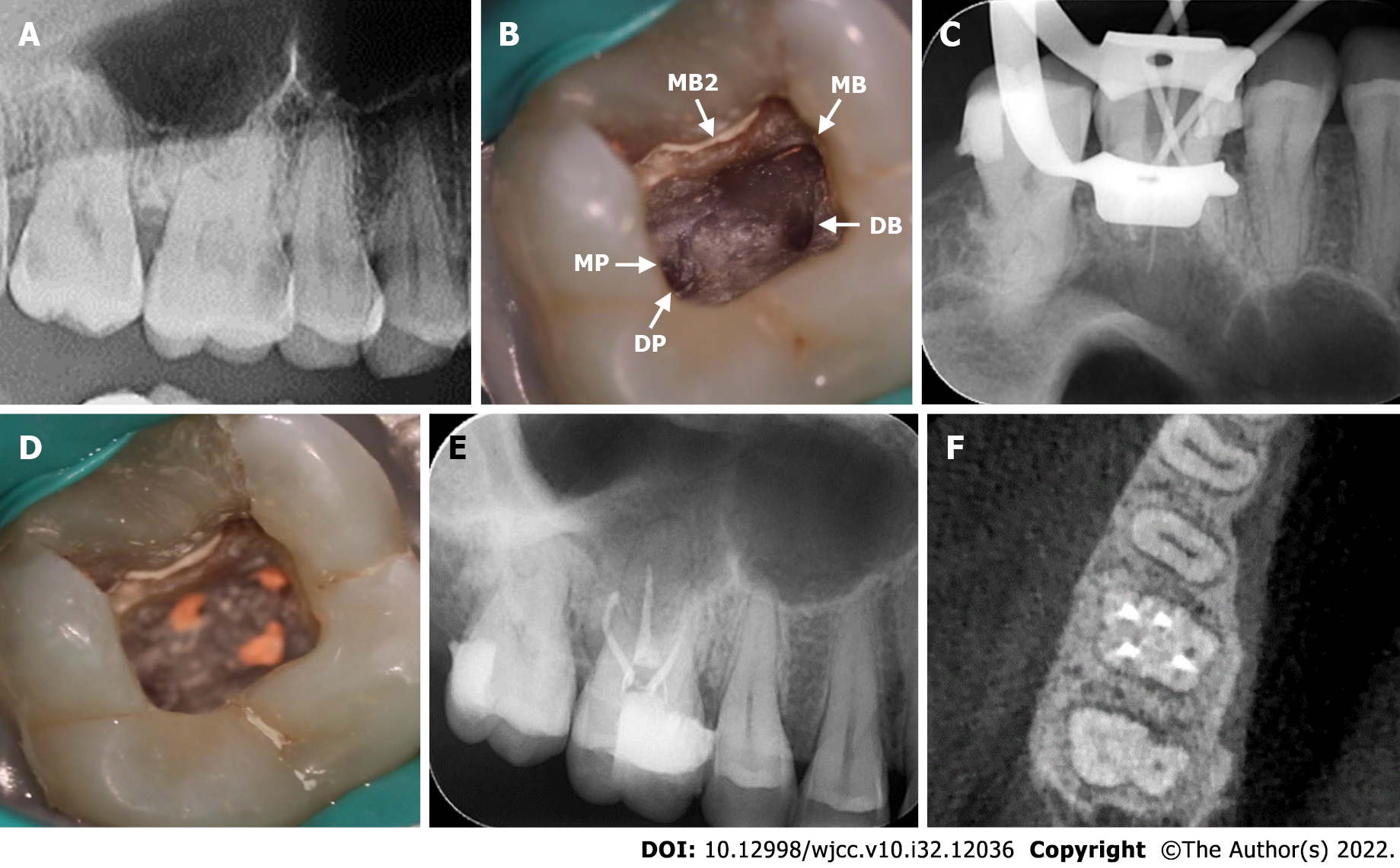 A diagnosis of irreversible pulpitis of the right maxillary first molar was made. The treatment recommendations included RCT and follow-up crown restoration. Subsequently, the treatment regimen was explained to the patient, and the patient's consent was obtained.

The carious lesion was removed using bur and a high-speed handpiece, and the pulp was exposed following the administration of 4 mL of 2% lidocaine as a local anesthetic (Produits Dentaires Pierre Rolland, Merignac, France). After rubber dam (Coltene, Altstatten, Switzerland) isolation, a routine RCT procedure was performed. The pulp chamber was opened, and an access cavity was prepared. Under the endodontic microscope (OPMI® Pico Zeiss, Carl Zeiss Meditec AG, Jena, Germany), the following four root canals were explored: MB, MB2, distobuccal (DB), and distopalatal (DP) canals (Figure 1B). In addition, unusual anatomical location of the root canal orifices were observed; the canal orifice of the DP canal was not located in the middle corresponding to the MB and DB canals. Under the endodontic microscope, the pulp chamber floor was carefully probed with a DG-16 explore (KaVo, Biberach, Germany), and a suspected fifth canal was discovered, which was named the mesiopalatal (MP) canal (Figure 1B). All treatment procedures were performed with an endodontic microscope with 10 × to 30 × magnification.

CBCT was performed to accurately assess the anatomical morphology of the MP canal. Moreover, the CBCT image revealed three roots in the right maxillary first molar and well obturated MB, MB2, DB, and DP canals (Figure 2A). However, in the palatal root, an unfilled root canal was identified (Figure 2B). We confirmed the presence of two separate palatal canals in the single palatal root. Next, the working length of the MP canal was measured (Figure 2C). The MP canal was mechanically shaped with a Marc Ⅲ nickel-titanium rotary instrumentation. After careful cleaning using the endodontic irrigation tip, the MP canal was dried with absorbent points. The injectable thermoplasticized gutta-percha technique was used for the obturation of the MP canal. The CBCT image revealed that the two separate root canals were well filled (Figure 2D). Both the X-ray and intraoral photograph revealed that the five canals of the maxillary first molar were well obturated after treatment (Figure 2E and F). Finally, the tooth was restored by resin composite filling. 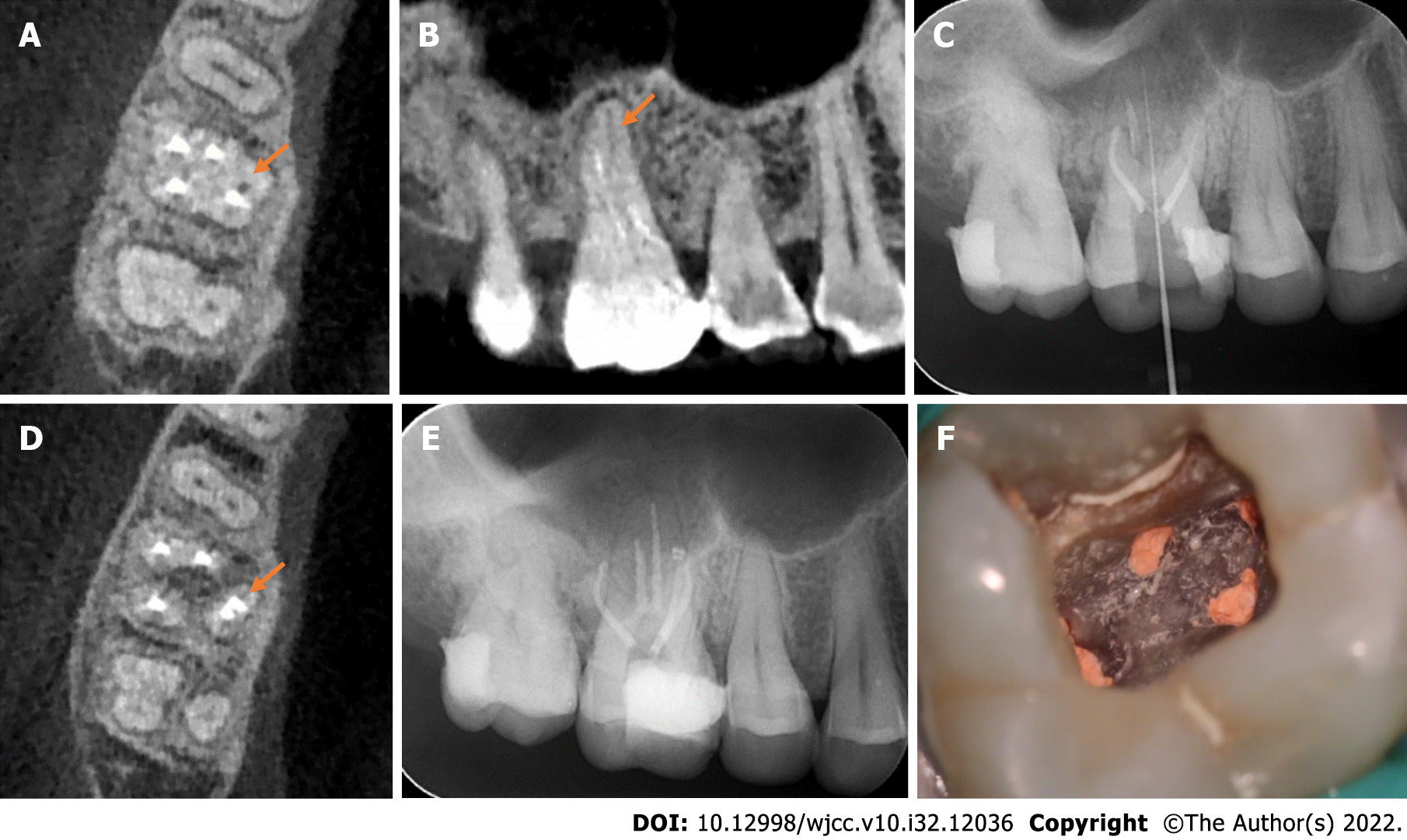 After the RCT, the quality of the obturation in the right maxillary first molar was evaluated using CBCT. The CBCT images revealed that the maxillary first molar contained three roots (MB, DB, and palatal roots; Figure 3A). The axial plane of the CBCT image showed that the MB and DB roots contained two and one canals, respectively, whereas two separate canals (MP and DP canals) were observed in the single palatal root (Figure 3B). The sagittal sectional CBCT images indicated that the MB, MB2 and DB canals were well filled (Figure 3C). Similarly, the MP and DP canals in the palatal root were densely obturated with the gutta-percha (Figure 3D). 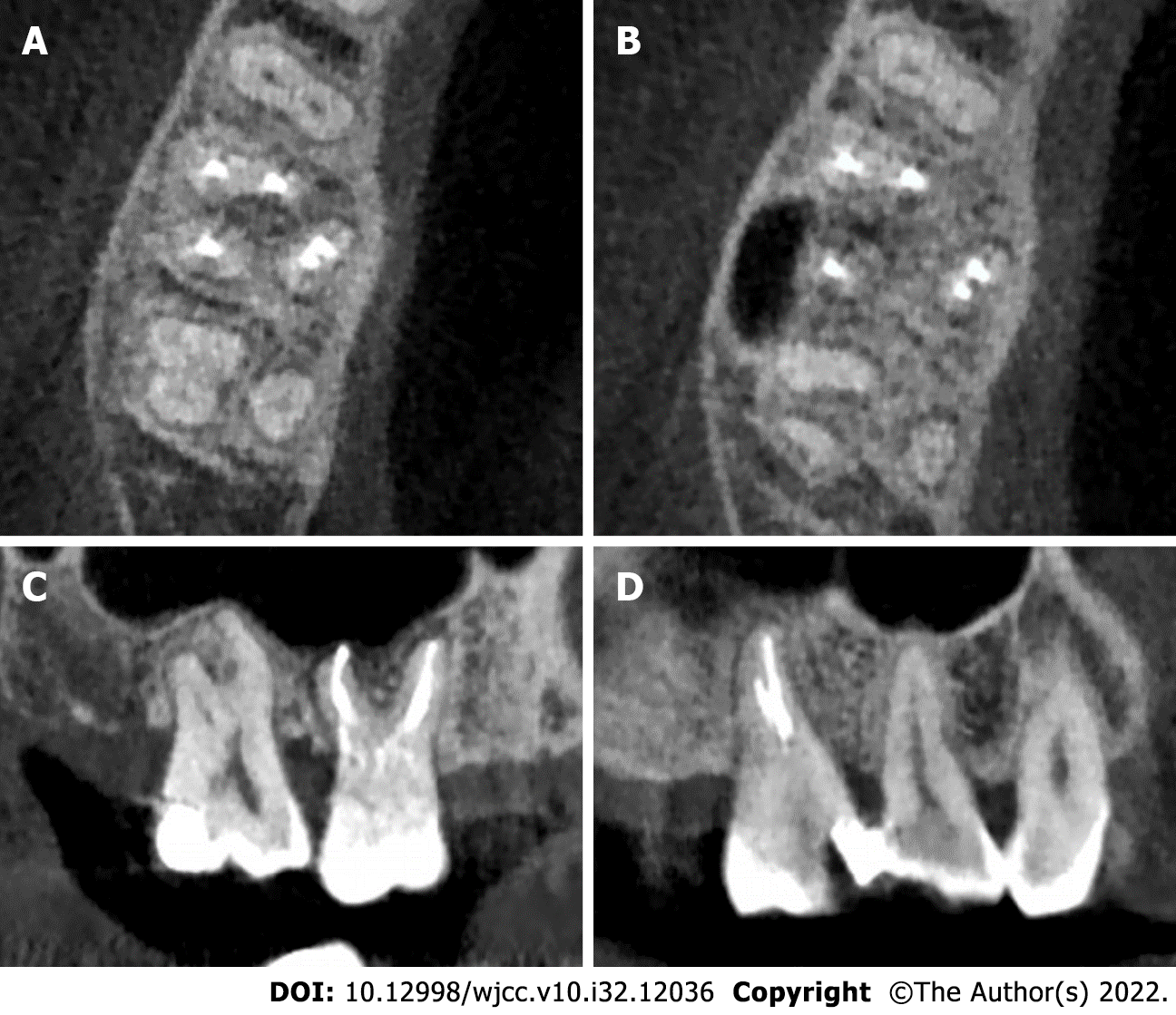 At the 1-mo follow-up, the maxillary first molar was completely asymptomatic, and the X-ray indicated that the RCT was successful (Figure 4A). As a result, tooth preparation and final ceramic crown restoration were performed (Figure 4B). After 9 mo, the tooth was clinically asymptomatic and radiographically sound (Figure 4C and D). 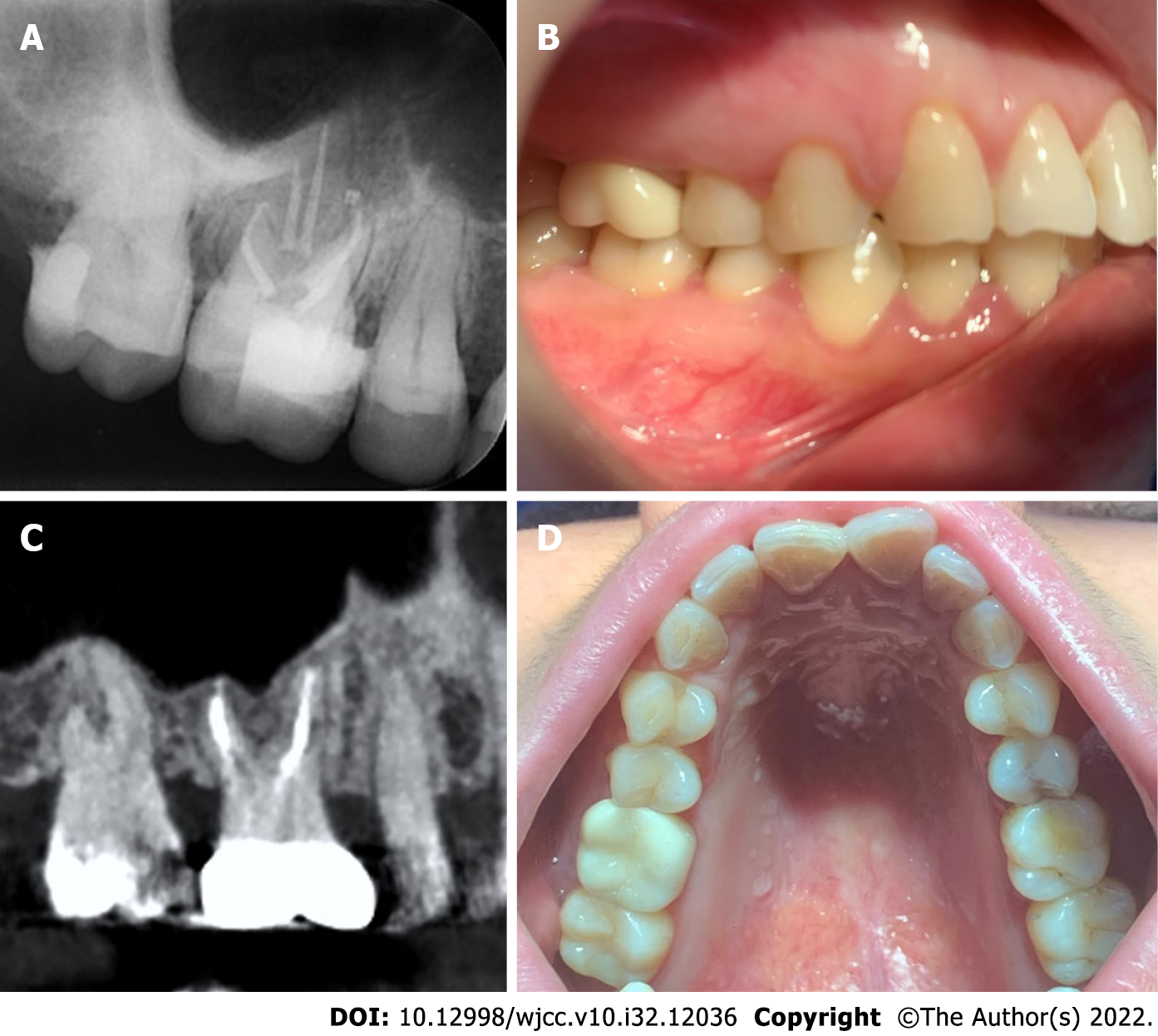 The development of radiographic techniques, especially the application of CBCT, has also been greatly helpful for complex endodontic treatments[33]. Traditional X-rays can only reveal the shape of the roots in two dimensions; however, CBCT can provide a three-dimensional image of the tooth, which can better describe root morphology and locate the anatomical variations in a complex root canal system. CBCT can detect the early stage of periapical lesions and improve tooth preservation through non-surgical treatment[34]. In molars, CBCT also demonstrated a higher detection capability for MB2 and C-shaped canals[3,6]. Through preoperative interpretation of CBCT images, the access cavity can be arranged more reasonably. Postoperative CBCT can also be used to evaluate the outcome of RCT. Shetty et al[35] recently found that CBCT showed potential application in regenerative endodontic procedures. CBCT has proven to be an effective and important assessment tool in endodontic treatment.

In this case, the distance between the orifices of MB and DP canals was shorter than that of MB and DB canals. This unusual situation suggests the possible presence of anatomical variation in the right maxillary first molar. Through careful exploration of the pulp chamber floor with an endodontic explorer, we successfully located the fifth root canal orifice of the palatal root. Although palatal root anatomical variations of the maxillary first molar are uncommon, clinicians should still consider such variations. For unusual root anatomy morphology, careful exploration should be performed with an endodontic microscope and CBCT to avoid missing variant root canals.