Amyloidosis is caused by misfolding of proteins and is characterized by formation of extracellular aggregates of insoluble fibrin. The primary effects in the eye include sharp deterioration of visual acuity as a result of vitreous opacity. According to the local and systemic distribution characteristics of amyloid deposits and their fibrin components, amyloidosis can be classified as primary, secondary or familial. Therefore, we report a typical case of vitreous amyloidosis in hereditary transthyretin amyloidosis (hATTR) to improve ophthalmologists’ understanding of the disease and reduce misdiagnosis and recurrence.

The patient was a 49-year-old man who complained of progressive visual decline in both eyes over a 2-mo period. No systemic diseases such as diabetes or hypertension were reported, and no obvious family history of disease was identified. The patient’s visual acuity was HM/10 cm in the right eye and 0.06 in the left eye. He had a transparent cornea in both eyes, with a normal anterior depth, clear aqueous humor, no obvious iris abnormalities, round pupils of approximately 3 mm in diameter, normal direct and indirect light reflexes, and normal intraocular pressure. After various examinations, the patient was diagnosed with binocular vitreous amyloidosis secondary to hATTR associated with a Lys55Asn variant in TTR. The binocular visual acuity recovered to 1.0 after binocular vitrectomy.

Vitreous amyloidosis is rare in the clinic and gene testing can assist the diagnosis accurately and effectively.

Amyloidosis is caused by misfolding of proteins, which is characterized by the formation of extracellular aggregates of insoluble fibrin[1]. Insoluble amyloid deposits manifest in various tissues and organs in the body during systemic amyloidosis, or in a specific locations during local or single organ amyloidosis[2]. Ocular amyloidosis is associated with several proteins including serum amyloid A, immunoglobulin light chain, transthyretin (TTR), gelsolin, keratinocyte protein, lactoferrin, and fibrinogen. The primary effects in the eye include sharp deterioration of visual acuity caused by vitreous opacity[1,3]. According to the local and systemic distribution of amyloid deposits and of their fibrin components, amyloidosis can be classified as primary, secondary, or familial[4].

Most previously reported cases of amyloidosis are of familial or systemic disease. However, this case reveals binocular vitreous amyloidosis in isolation, in an individual with no additional systemic symptoms and with no obvious family history of disease. These findings make this case particularly rare.

The patient was a 49-year-old man who complained of progressive vision decline in both eyes over a 2-mo period.

The patient presented associated with no obvious family history of disease.

The patient’s visual acuity was HM/10 cm in the right eye and 0.06 in the left eye, he exhibited a transparent cornea in both eyes, with a normal anterior depth, clear aqueous humor, no obvious iris abnormalities, round pupils of approximately 3 mm in diameter, normal direct and indirect light reflexes, and normal intraocular pressure. Slit lamp examination after mydriasis showed that there were white spots similar to foot plates on the posterior surface of the lens in both eyes (Figure 1A and B). Fundus examination revealed vitreous opacity in both eyes, with the presence of a spider web-like white cord blocking the fundus in both eyes (Figure 1C and D). 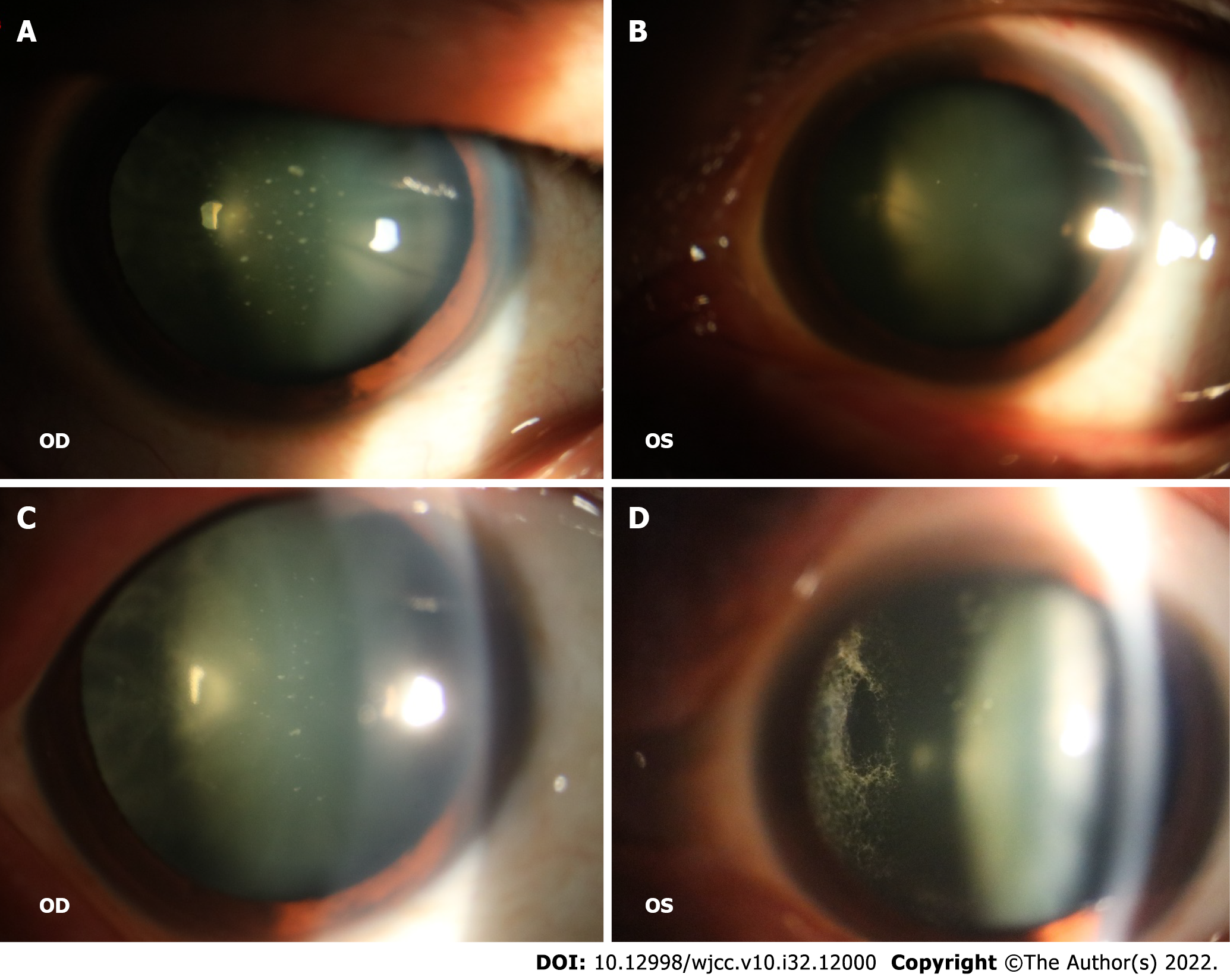 Figure 1 Physical examination. A and B: White spots on the posterior surface of the lens in both eyes, which were similar to foot plates; C and D: Fundus examination revealed vitreous opacity in both eyes, with a noticeable spider-web-like white cord.
Laboratory examinations

Histological examination of the vitrectomy tissue of the right eye exhibited positive hematoxylin and eosin (HE) staining (Figure 2A) and Congo red staining (Figure 2B). Meanwhile, the results of interleukin (IL)-6 and IL-10 measurements were normal (Figure 2C); this finding excluded the possibility of ocular lymphoma. Genetic tests revealed that the patient was heterozygous for a single nucleotide substitution, c.165 G>C, in exon 2 of the TTR gene, resulting in the replacement of a lysine with an asparagine at position 55 of the mature protein, p.Lys55Asn (Figure 3). 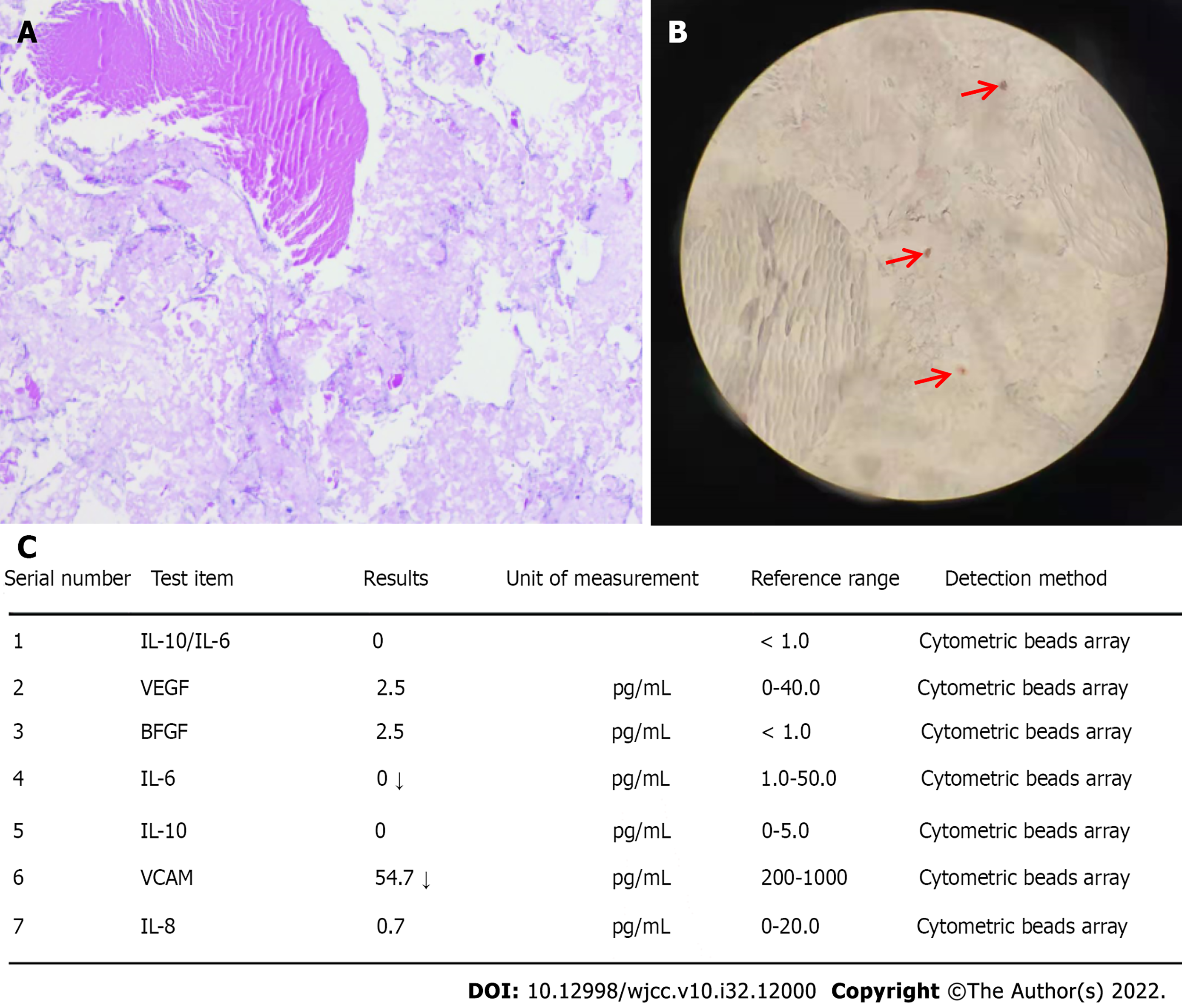 Figure 2 Laboratory examinations. A: Hematoxylin and eosin staining revealed a waxy light eosinophil; B: Congo red staining was positive (at the arrow); C: Interleukin (IL)-6 and IL-10 levels were normal.

Figure 3 A chromatogram revealing the genetic sequencing result of the patient.
Imaging examinations

By using fundus color photography and B-ultrasound examination, we observed opacity in bilateral vitreous bodies (Figure 4A-D). However, no obvious abnormalities were identified in the heart or abdomen during investigation by color ultrasound (Figure 4E). 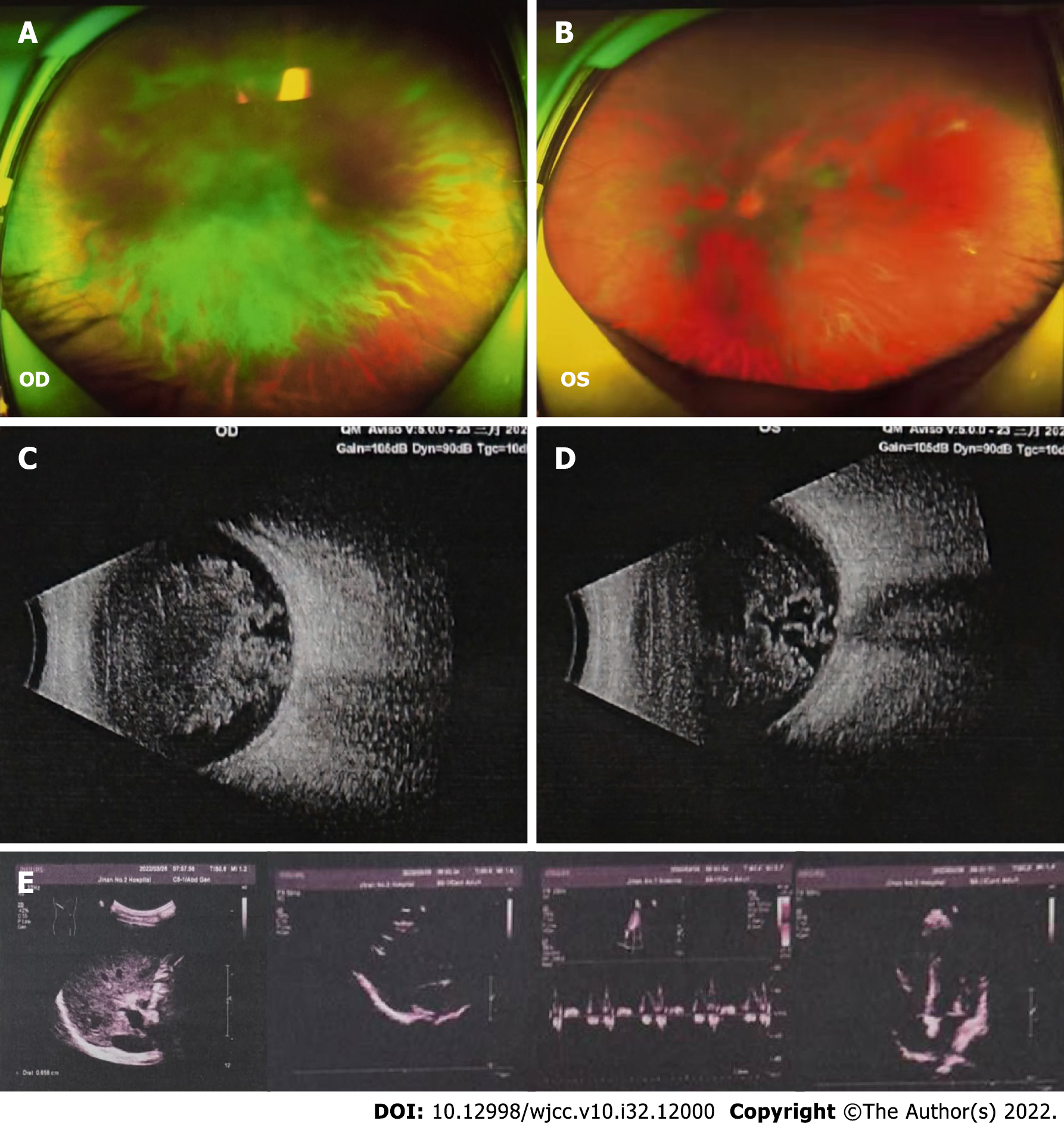 Figure 4 Imaging examinations. A-E: Fundus color photography (A and B) and ultrasound examination (C and D) showed obvious opacity in bilateral vitreous bodies. There was no obvious abnormality of the heart or abdomen by color ultrasound (E).
FINAL DIAGNOSIS

The visual acuity of both eyes recovered to 1.0 on postoperative day 1. There were no complications at discharge.

Amyloidosis is a rare disease characterized by the deposition of amyloid in the extracellular space of organs and tissue; it can be divided into three types according to localization. About 75% of patients present with primary amyloidosis, 5% of patients with secondary amyloidosis, and < 5% of patients with familial amyloidosis. In hereditary amyloidosis, accumulation of transthyretin variants is the most frequent cause and can result in progressive polyneuropathy[5]. Polyneuropathy secondary to familial amyloidosis is characterized by systematic deposition of mutated transthyretin, and most cases are the result of a methionine being substituted for valine at position 30 of the protein. Such cases of amyloidotic disease were first discovered in Portugal in 1952[2].

Amyloid deposition in the vitreous body is a typical manifestation of neurofamilial amyloidosis. According to previous studies, in cases of neurotic familial amyloidosis, ocular amyloid deposition was observed in approximately 10% of patients, while the incidence of vitreous opacity was between 5.4% and 35.0%[6,7]. In the present study, color Doppler ultrasonography of the heart and abdominal organs were performed, but no systemic amyloid deposition was identified. We explored the family history of the case in detail. However, the elder brother of the patient refused to undergo pedigree testing because he had no symptoms in either eye, and the individual studied indicated that he was the only member of his family with eye disease. In a review of vitreous amyloidosis by Sandgren et al[2], only 10 cases of nonfamilial vitreous amyloidosis without neuropathy were identified. Since then, only two similar cases have been reported. The average age of the 12 patients identified thus far was 61.6 years, and the case in this study was a 49-year-old man, which made our patient younger than the average age previously reported.

Vitreous amyloidosis usually manifests clinically as a gradual decline in bilateral or unilateral visual acuity. The primary clinical phenotype in the present case was a progressive decline in visual acuity in both eyes. The amyloid deposits in the vitreous were gray or yellowish-white; initially, we suspected the cause was either vitreous hemorrhage or uveitis, but the patient was absent of systemic disease, with binocular vision loss and spider web-like white striped deposits in the vitreous cavity of both eyes. In previously reported cases of vitreous amyloidosis, these deposits were described as being akin to cobwebs, glass wool, film, fibrils, or precipitate. There were also reports of yellow spherical turbidity in one particular case[8], which appeared similar to the nature of the vitreous deposits in our patient. This finding led to a change in our diagnostic thinking. The earliest report of this type of deposit was described as a small white acicular opaque body covering arteries or small blood vessels, which gradually expanded into clusters and infiltrated the vitreous body[2]. During vitrectomy of our patient, similar acicular white opaque bodies were observed in the small blood vessels of the fundus. Simultaneously, we detected IL-6 and IL-10 in vitreous fluid, which ruled out the possibility of ocular lymphoma. It has been reported that the foot-like (pseudopod) white spots on the posterior surface of the lens are pathological features of amyloidosis[9] and the patient in this study presented with this clinical feature; a finding that further directed diagnosis and treatment. Histologically, it was observed that the amyloid in the vitreous body was yellowish and eosinophilic, demonstrating an affinity for p-toluidine blue and crystal violet dyes. By Congo red staining, the amyloid protein was dark orange and exhibited birefringence and dichroism when observed under polarized light. Therefore, we performed HE and Congo red staining upon the material surgically removed from the vitreous cavity of the patient and all samples exhibited positive results further confirming our diagnosis. However, due to the failure to perform apple-green birefringence in polarized light, it is feasible that the result of the Congo red staining may be false positive. As such, we further performed genetic sequencing. The results of the genetic sequencing revealed that the patient had binocular vitreous amyloidosis secondary to hATTR caused by a Lys55Asn variant in TTR.

It has been reported in previous literature that vitrectomy is a safe method for the treatment of vitreous amyloidosis, providing effective improvement to vision[10,11]. However, the procedure is challenging due to the nature of complete vitrectomy and the common recurrence of postoperative vitreous opacity. In the present case, the vitreous was completely removed from both eyes, and good postoperative visual acuity was obtained. It is necessary to continue to observe whether the patient undergoes recurrence of post-surgical vitreous opacity.

Vitreous amyloidosis is rare in the clinic and is easily misdiagnosed by clinicians. Although the patient in this report had no family hereditary history or systemic manifestations, there were white spots on the posterior surface of the lens and white web-like striped deposits in the vitreous cavity. Patients with similar phenotype should be considered to have amyloidosis. However, histological examination to confirm the diagnosis is necessary. Vitrectomy is an effective method for the treatment of this form of ocular amyloidosis; however, some cases may be complicated by serious ocular complications, such as secondary glaucoma and retinal vein occlusion, in addition to systemic disease[12,13]. Previous literature has reported that eye dysfunction may be the first feature of amyloidosis after ophthalmologists and physicians conducted comprehensive patient examinations resulting in diagnosis with systemic amyloidosis, although this is not common[14]. The case reported in this paper had ocular dysfunction in the absence of any systemic disease but long-term and careful follow-up of the patient is necessary.