Research Domain of This Article
Nursing

Upper arm lymphedema is a common complication one year after breast cancer surgery, which profoundly impacts patients' quality of life.

We reported a case of lymphedema induced by prolonged sun exposure 11 years after breast cancer surgery.

Breast cancer is one of the most common malignancies, accounting for 15% of female tumors[1]. Since 2000, the incidence in China has been increasing with a 1% annual increment[2]. Although survival has been significantly improved due to advances in treatment, the quality of life was affected, sometimes due to lymphedema on the affected side[3]. Lymphedema is the main complication after cancer treatment, affecting 12%–28% of the patients after axillary dissection and 3.5%–7.5% after sentinel node biopsy[4]. Patients have upper limb lymph accumulation due to lymphatic vessel rupture and deformation. Lymphedema causes shoulder joint dysfunction and affects patients' mental well-being[5,6]. Research shows that approximately 1/5th of patients in China develop secondary upper limb lymphedema within one year of having breast cancer surgery[7]. Although various approaches have been used, lymphedema remains the most common chronic complication of breast cancer treatment, with only palliative therapies available[8]. Therefore, prevention against modifiable risk factors has become critical. Risk factors for lymphedema include overweight/obesity, high blood pressure, axillary lymph node dissection, chemotherapy, local radiotherapy[9], limb overload, trauma and infection[10].

Postoperative infection, delayed healing and improper nursing can hinder lymphatic vessel reconstruction and the establishment of collateral circulation[11]. When using heat therapy, individuals should use common sense and proceed with caution. If there is swelling in the at-risk limb or increased swelling in the lymphedematous limb, stop using heat, such as a hot tub or sauna. Recently, we cured a patient with severe limb lymphedema following solar dermatitis with massive infection, 11 years after right breast cancer surgery. We hereby report this case with the patient's informed consent.

She complained of progressive swelling and heaviness of the right upper limb after a 4-d (approximately 15 h) of outdoor fieldwork under the direct sun. At that time, the patient wore a short-sleeved shirt with no covering on both upper limbs. She experienced chest wall burning pain on the seventh day and came to seek help on the ninth day. On September 9, 2021, she was admitted with forearm erythema, desquamation, and a body temperature of 39.4 ˚C. Prior to this, the patient's upper limbs were normal, and his right upper limb was always protected, with no mosquito bites, infections or injuries. When the patient was exposed to the hot sun nine days ago, she mistakenly believed that she had been in surgery for more than 10 years and did not need to protect his upper limb, which resulted in swelling and pain in his right upper limb and sunburn on his left upper limb.

Figure 1 depicts the affected limb on admission. According to the group standard of the Chinese Nursing Society for lymphedema evaluation (T/CNAS 05-2020), combined with the symptoms reported voluntarily by patients. Following admission, we performed a Breast Cancer & Lymphedema Symptom Experience Index evaluation and measured the circumference. The difference in the circumference between the affected and healthy sides was > 3 cm and diagnosed as severely sunburned lymphedema of the right upper limb[12]. Supplementary Table 1 shows the circumference measurements of both arms. 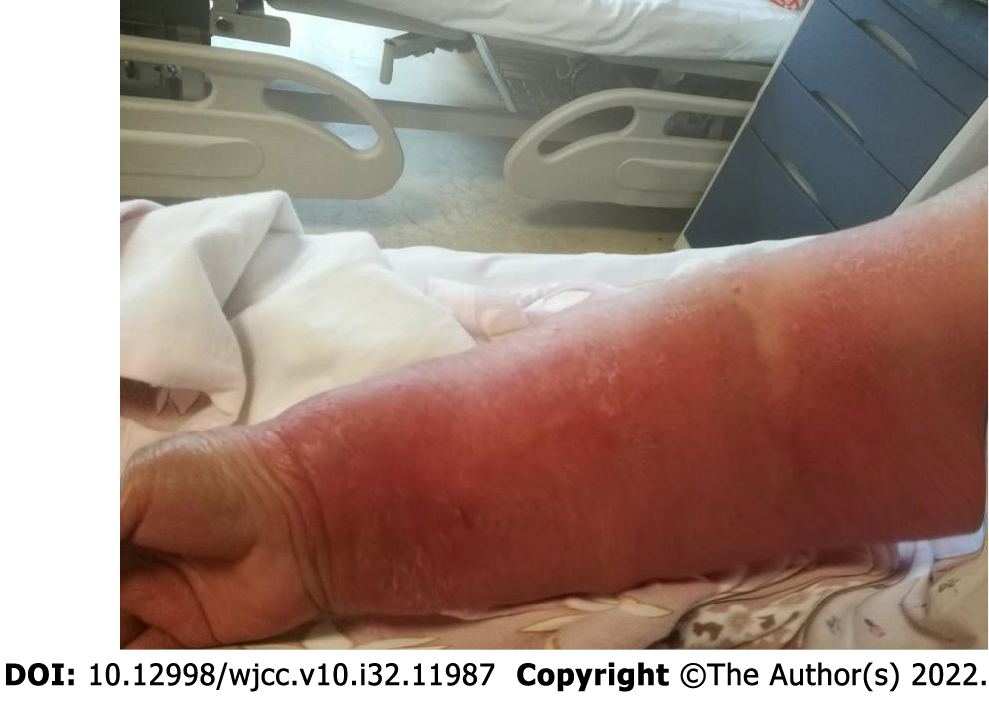 The right-handed female patient, aged 61, underwent modified radical mastectomy for the right breast cancer (with chemotherapy and radiotherapy of the axilla and chest) in our department 11 years ago. She continued a regular follow-up (The patient was followed up every three months for two years after the operation, every six months for the next 3-5 years and once a year after five years of operation). After breast surgery, there was no complaint of right upper limb discomfort; therefore, arm circumference measurement was not performed regularly.

Comparison of circumferences of left and right upper limbs.

She was also diagnosed with a chest wall infection on the affected side after blood tests.

Based on bacterial culture results, an eight days 400 U penicillin (b.i.d) therapy was initiated along with a standard of daily dressing and close monitoring of the blood circulation of the infected skin. The patient was advised to wear loose dresses to avoid friction. On the ninth day after the infection was cured, a physiotherapist started a lymphatic drainage massage daily for 40 min. The centripetal massage was also performed twice daily for 30 min with a sleeve pressure of < 40 mmHg. After the physiotherapy, the patient was instructed to wear elastic sleeves. The circumference measurements were taken daily at 5:00 pm to monitor the recovery (Supplementary Table 2). On the 15th day of admission, the patient was discharged after a comprehensive examination of fully recovered limb and function. Figure 2 shows the limbs on the discharge day. We followed the patient telephonically at two weeks, one month, three months, and six months after discharge, and the patient reported no change in any function or circumference of the right limb. Throughout her hospital stay and follow-up calls, she was encouraged to discuss her negative feelings with the care team and to be actively involved in making decisions about treatment and monitoring and prevention of lymphedema. 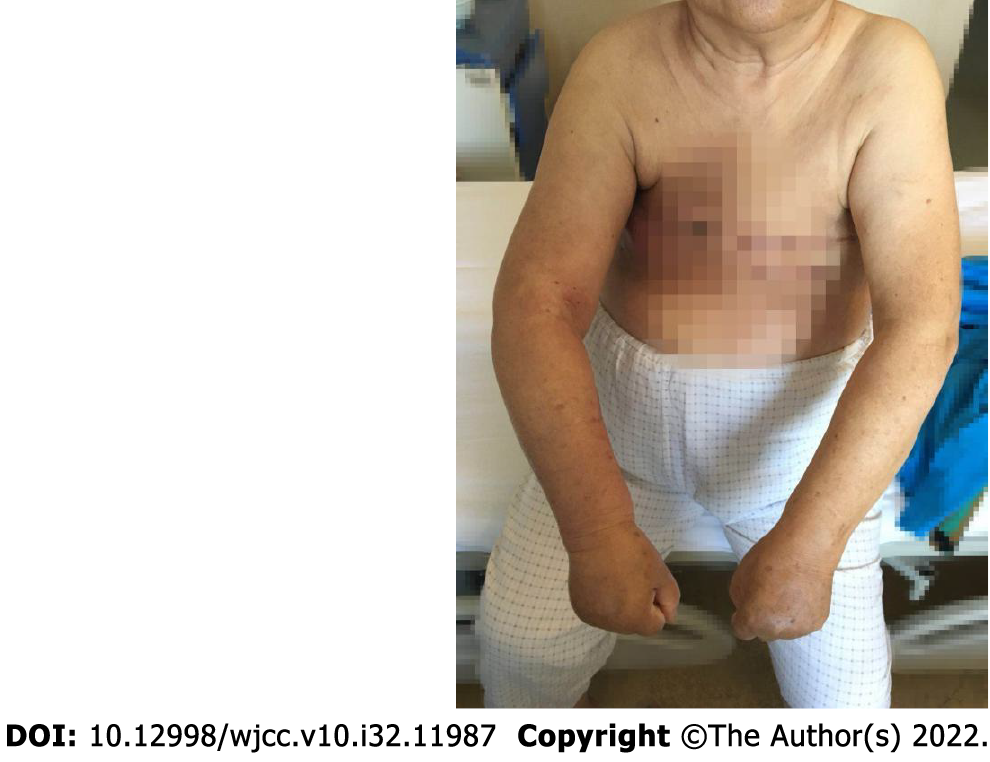 The patient got a comprehensive recovery, and there was no complaint of discomfort in the follow-up visit.

One of the most common post-surgical complications among breast cancer survivors is lymphedema, which can evolve into irreversible interstitial fibrosis[13]. Therefore, the screening and monitoring of lymphedema are important. The most common clinical manifestations of lymphedema include infection, swelling, pain, discomfort, and reduced joint dexterity[14]. American national lymphedema network declaration indicates that patients should be advised to avoid air traveling, maceration, skin puncture (blood collection), compression (blood pressure measurement), skin infection and extreme temperatures of the affected limb[15]. The patient, in this case, had lymphedema due to high temperature. The evaluation is primarily based on the symptoms of patients. In the early stages, patients typically present with a subtle onset of arm or hand swelling, accompanied by a sensation of heaviness in the limb. Swelling in the middle and late stages cannot be relieved by raising or applying external pressure to the affected limb. The scope of involvement is broad and has an orange-peel appearance[16]. The Chinese Nursing Society's Group standard for prevention and care of lymphedema after breast cancer surgery (T/CNAS 05-2020) states that all breast cancer patients should be screened for lymphedema risk before being discharged from the hospital after surgery.

Lymphedema risk scales should be used following a breast cancer operation to identify high-risk patients. Furthermore, for high-risk patients, compliance with preventive behaviors should be monitored at least every six months for the first two years after the operation, and whether lymphedema developed or not should be evaluated. All patients did not have typical presentations. People who are at high risk should accept the objective physical examination, which may include limb measurements, magnetic resonance imaging[17], lymphoscintigraphy[18], indocyanine green[19], and bioimpedance spectroscopy. In a retrospective study of over 165000 hospital admissions for lymphedema, the majority of cases (92%) were associated with cellulitis in the United States between 2012 and 2017[20,21]. Research proves that prolonged exposure of affected limbs to ultraviolet radiation stimulates inflammatory mediators to dilate and infiltrate the blood vessel and damages the skin barrier function, leading to local oozing and even infection. This might be due to high protein deposition in the interstitial tissues that accelerates the growth and reproduction of bacteria[22,23].

The case indicates that patients should be informed to avoid sun exposure shortly or long after breast cancer surgery, especially in regions where people culturally like beaches and outdoor activities. Patients' knowledge, attitude and behavior play a key role in preventing lymphedema in breast cancer patients[24]. The medical care team should disseminate evidence-based knowledge of lymphedema, guide and train patients to avoid risks, and follow up and closely monitor their practice following hospital discharge.

Baseline upper limb circumference is an objective measurement used to monitor the prevention, occurrence and outcome of lymphedema in breast cancer patients. In this case, overall circumference changes before and after the occurrence of lymphedema and after the treatment could not be evaluated, suggesting the need to record complete upper limb measurements for the rehabilitation of breast cancer patients.

We reported a case of lymphedema caused by prolonged sun exposure 11 years after breast cancer surgery and radiotherapy. Breast screening, patient education and follow-up after hospital discharge could help to prevent upper-arm lymphedema.