Primary squamous cell carcinoma (SCC) with sarcomatoid differentiation of the kidney was rarely reported. This disease is usually related to renal stones, and due to a lack of symptoms and radiological features, patients usually attend the hospital with late stage disease.

A 54-years-old female presented with left flank pain and an abdominal mass for 6 mo. Imaging studies revealed that the left kidney was enlarged and massive hydronephrosis was present. A stone was seen in the ureteropelvic junction. The patient subsequently underwent left radical nephrectomy, and histopathological examination of the mass revealed a poorly differentiated renal SCC with sarcomatoid differentiation. After primary surgery, the patient received four cycles of tirelizumab. Four months later, the patient developed adrenal, lymph, and uterine appendage metastases.

SCC of the kidney has a poor prognosis, and should be considered in patients with a renal mass, long-standing urinary calculi and massive hydronephrosis.

Core Tip: Squamous cell carcinoma (SCC) with sarcomatoid differentiation is extremely rare and has a poor prognosis. The presence of SCC should be considered when a renal mass is found in a patient with long-term stones and hydronephrosis. Early surgical treatment may be beneficial.

A 54-year-old female patient presented to the hospital with flank pain and an abdominal mass for 6 mo.

The patient presented with flank pain and an abdominal mass for 6 mo which had become worse in the previous 2 wk.

The patient had previous normal menstruation, but was now menopausal. She denied any relevant family history.

Ultrasound showed that the left kidney was enlarged with severe hydronephrosis and a thin renal parenchyma. A stone measuring approximately 8 mm was observed in the ureteropelvic junction. Two round masses were observed in the middle and upper parts of the left kidney. Abdominal computed tomography (CT) revealed an 8-mm stone in the left upper ureter (Figure 1A), and severe hydronephrosis was seen in the left kidney. The masses detected in the left renal parenchyma were quasi-circular, uneven, and had a slightly low-density shadow and uneven enhancement, and the largest measured approximately 9 cm × 10 cm (Figure 1B). 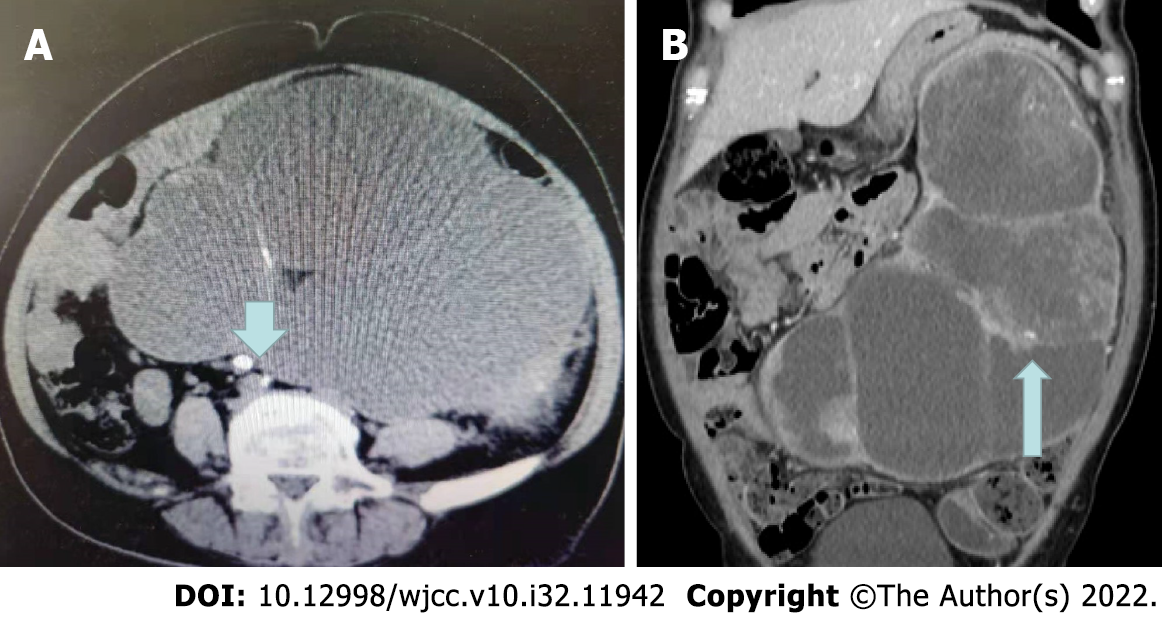 A left radical nephrectomy was subsequently performed. Gross examination of the radical nephrectomy specimen revealed enlargement of the left kidney. There were several nodules in the renal parenchyma, 20 cm × 13 cm × 10 cm in size, most of which were diffuse flakes, and some were spindle-shaped and fascicular, a small amount of bone-like matrix was also observed. Scattered squamous areas were observed in the diffuse area, along with the formation of keratinized beads.

Microscopic examination revealed SCC of the renal parenchyma with dedifferentiated sarcomatosis (Figure 2). The proportion of sarcomatoid components was approximately 50%.

SCC of the kidney is a very rare malignancy, mostly diagnosed at advanced stages, and represents approximately 1.4% of all renal malignancies[3]. Only a few cases have been reported in the literature; therefore, the data on SCC of the kidney are from a few case reports[4,5]. Squamous cell cancers of the kidney are associated with a poor prognosis. SCC presents with late stage disease and poor survival rates[3]. Some case series have reported a median survival time of 3.5 mo[6]. Renal SCC with sarcomatoid differentiation is even rarer. There is only one other reported case of renal SCC with sarcomatoid differentiation[2]. This case was a 55-years-old female, presented with flank pain and an abdominal mass, CT scan demonstrated gross right renal hydronephrosis with renal parenchymal atrophy and multiple right renal calculi. She accepted open nephrectomy. The pathology suggested that the macroscopic examination showed hydronephrosis with severe pyonephritis, obvious cortical atrophy and obstructive kidney stones at pelviureteric junction. Histological examination unexpectedly revealed squamous metaplasia of pelvic urothelial epithelium with free debris of SCC in situ and sarcomatoid tumors. The five epithelial markers of sarcomatoid tumors were all negative, and only P63 was positive. Two months after the operation, a large mass was found in the original renal fossa. The needle biopsy considered SCC with sarcomatoid transformation. Then she received palliative radiotherapy and died 3 mo after nephrectomy. Our case is similar to this case, the difference is that our case can find obvious tumors on CT.

Clinically, SCC or sRCC occurs in middle-aged patients with symptoms including flank pain, hematuria, and an abdominal mass, and is often associated with chronic inflammation, hydronephrosis, and squamous metaplasia[10]. In 18%–100% of cases, urolithiasis is a main risk factor[2]. Therefore, it is difficult to differentiate the disease clinically.

Radiologically, primary SCC of the renal pelvis may present as a solid tumor, with renal effusion, calcifications, or as infiltrative lesions of the renal pelvis without obvious masses[11]. The differential diagnosis by radiologic comprise primary and secondary kidney cancer and xanthogranulomatous pyelonephritis (XGP) related to nephrolith. XGP is a rare chronic pyelonephritis, usually occurs in chronic obstruction, resulting in hydronephrosis and destruction of renal parenchyma. XGP is usually related to renal calculus, but rarely causes keratinizing squamous metaplasia, it is very similar to renal tumors, leading to misdiagnosis of malignant tumors[12]. The clinical and radiologic features are inapparent in renal SCC may easy to misdiagnose. Histopathology is required for diagnosis[13].

Histologically, SCC shows extensive squamous differentiation and keratin pearls[14]. sRCCs usually is large (median size approximately 10 cm), the section is white or grayish white, and tough texture[15]. Primary SCC of the renal parenchyma needs to be differentiated from the following diseases: Primary SCC of renal pelvis, distant metastatic SCC, and transitional epithelial carcinoma of the urinary with extensive squamous metaplasia. If there are recognizable immature transitional cell components including urothelial carcinoma in situ, should be classified as primary urothelial carcinoma with squamous differentiation. However, typical keratinizing squamous metaplasia of the adjacent flattened urothelium, especially associated with dysplasia, supports a diagnosis of primary SCC of the renal pelvis[4]. In this case, we don’t found dysplastic urothelial component or squamous metaplasia of urothelium.

Lee et al[8] in their study classified these tumors into two groups, according to localisation of the tumors as central and peripheral. Central renal cell carcinoma presents more Intraluminal components and is usually associated with lymph node metastasis whereas peripheral renal SCC presents with prominent renal parenchymal thickening and might invade the perirenal fat tissue before lymph node or distant metastasis could be identified[8]. Based on these criteria the present case classified as central renal SCC.

The prognosis of renal SCC is poor, and most cases are diagnosed in the late, terminal stage. As 60%–80% of sRCC patients present with advanced or terminal stage disease, the natural history and prognosis is bleak[16]. The median survival time is approximately 6–13 mo, and a higher percentage of sarcomatoid dedifferentiation on histology has been reported to confer a worse prognosis[17]. Due to the heterogeneity of tumors, 3D fusion sampling can better grade and stage tumors, better guide clinical adjuvant treatment and evaluate prognosis[18].

sRCC has a poor response to radiotherapy and chemotherapy. Immune checkpoint inhibitors may have some therapeutic effects in the treatment of sRCCs. In pathology, the activation of the Programmeddeath-1 (PD-1) /Programmed Cell Death-Ligand 1 (PD-L1) signaling pathway probably can block immune cell activation, tumor cells may be use this mechanism to escape anti-tumor immune control. Targeting the PD-1/PD-L1 axis is a milestone breakthrough in cancer treatment[20]. Future clinical trials should focus on therapies such as anti-cytotoxic T-lymphocyte antigen 4 (anti-CTLA4), anti-PDL1, anti-PD1, and combinations with targeted therapy agents that have been shown to augment the cytotoxic tumor immune microenvironment to improve progression and survival outcomes in patients with sRCCs[21,22]. However, as observed in our case, the available medical literature on this rare malignant entity indicates a poor prognosis.

Renal SCC with sarcomatoid differentiation is extremely rare, and the prognosis is very poor. In patients with renal masses, long-standing urinary calculi and massive hydronephrosis, should be alert to the possibility of renal SCC. Early surgical treatment combined with immunotherapy may provide a survival benefit.

We thank Professor Xiang Song-Tao for his guidance in the study.