Left cardiac myxoma (CM) is the most common benign tumor of primary cardiac tumors, but because of its special position caused by pathological physiology change, caused by the complications of the heavier, the surface is often accompanied by blood clots, once fall out, it causes peripheral vascular embolization, such as acute lower limb artery embolization, harmfulness is large, high morbidity, and easy to occur repeatedly.

A 67-year-old male patient suddenly appeared numbness and weakness of the left lower limb and could not walk without obvious incentive. The patient was finally diagnosed as left CM complicated with acute lower limb arterial embolism after completing cardiac ultrasound, computer tomography angiography, and histopathological analysis, such as hematoxylin-eosin stain staining, immunohistochemistry and special staining including alcian blue staining and periodic acid schiff staining. Arterial thrombosis was removed successfully by femoral artery thrombectomy, postoperative numbness and weakness of the patient's left lower limb disappeared, skin temperature became warm, and dorsal foot artery pulsation was accessible. The patient was readmitted to the hospital 8 mo after discharge for left atrial mass resection, and was diagnosed as CM by postoperative histopathological examination.

Although CM is rare, it may be considered as the source of embolism in patients with acute limb ischemia. Repeated loss of thrombus on the tumor and its surface may lead to repeated embolism of peripheral vessels. Cardiac ultrasound is helpful for early diagnosis. Here, we use this case report to highlight left CM as an important cause of acute limb ischemia and to report our experience in the diagnosis and treatment of lower limb arterial embolism caused by CM detachment.

Core Tip: Cardiac myxoma (CM), although rare, is a unique cause of acute arterial embolism, we report a rare case of this type and provide insights into the diagnosis and treatment of acute lower extremity arterial embolism caused by shedding of left CM. We hope that by improving the recognition of the disease, we can reduce intervention time and thus avoid delays in diagnosis and treatment.

The most common primary tumor of the heart is left cardiac myxoma (CM). CM is rare and benign and has an incidence of approximately 0.5 per 1 million people per year[1]. There are thrombi of different sizes, and once they fall off, they can easily cause embolisms in the peripheral blood vessels, thus causing serious complications. The clinical manifestations of left atrial myxoma vary from asymptomatic to fever, multiple arterial embolisms, syncope, and sudden death. Arterial embolism is a common serious complication of myxoma, and the condition is dangerous and life-threatening[2]. The repeated shedding of CMs can easily lead to the recurrence of arterial embolism, so early diagnosis of myxoma is very important for the early treatment of arterial embolism. Cardiac ultrasound and vascular computed tomography angiography play a key role in the rapid diagnosis of myxoma and arterial embolism[3]. CM is a benign tumor that grows slowly in the heart cavity and originates from mesenchymal cells of the septal endocardium. Systemic embolic events have been reported in 30% to 50% of patients with left atrial myxoma, half of which have cerebrovascular involvement[4], and the recurrence of acute lower extremity arterial embolism caused by left atrial myxoma is rarely reported in China. This study reports a patient with an acute lower extremity arterial embolism caused by CM shedding, discusses the clinicopathological features, clinical diagnosis and treatment, and includes a literature review to improve the understanding of the rare disease and to avoid misdiagnosis and delayed treatment.

A 67-year-old male patient suddenly developed numbness and weakness of the left lower extremity without an obvious origin 6 h ago, and he could not walk.

Six hours prior to admission, the patient suddenly developed numbness and weakness of the left lower extremity without an obvious origin, so he went to the emergency department of our hospital.

Although he had a history of hypertension and was treated with oral antihypertensive drugs, his blood pressure was well controlled. He denied a history of atrial fibrillation. In 2016, he had an arterial embolism in both lower extremities; he also had a history of bilateral femoral artery thrombectomy, and long-term treatment with oral Bayer aspirin.

The patient was not a descendant of a consanguineous marriage, and there was no family history of a similar disease.

The laboratory results at admission were normal, including routine blood tests, coagulation function, liver and kidney function, tumor markers, and urine and stool tests, but the d-dimer results (670 µg/L) were not normal (0-500 µg/L).

Bedside echocardiography showed two abnormal echo groups in the left atrium (shown by the red arrow), which were 3.1 cm × 1.8 cm and 1.0 cm × 0.8 cm in size, and there was an acceptable range of motion (Figure 1). Computer tomography angiography (CTA) of the lower extremity vessels showed that the left popliteal artery was not visualized shown by the red arrow, so a lumen embolism was considered (Figure 2). The patient’s left lower extremity ischemic symptoms were severe, and there was a risk of lower extremity necrosis. The surgical indications were clear. After completing the preoperative examination and excluding surgical contraindications, an emergency left femoral artery incision was made, and a thrombectomy was performed. 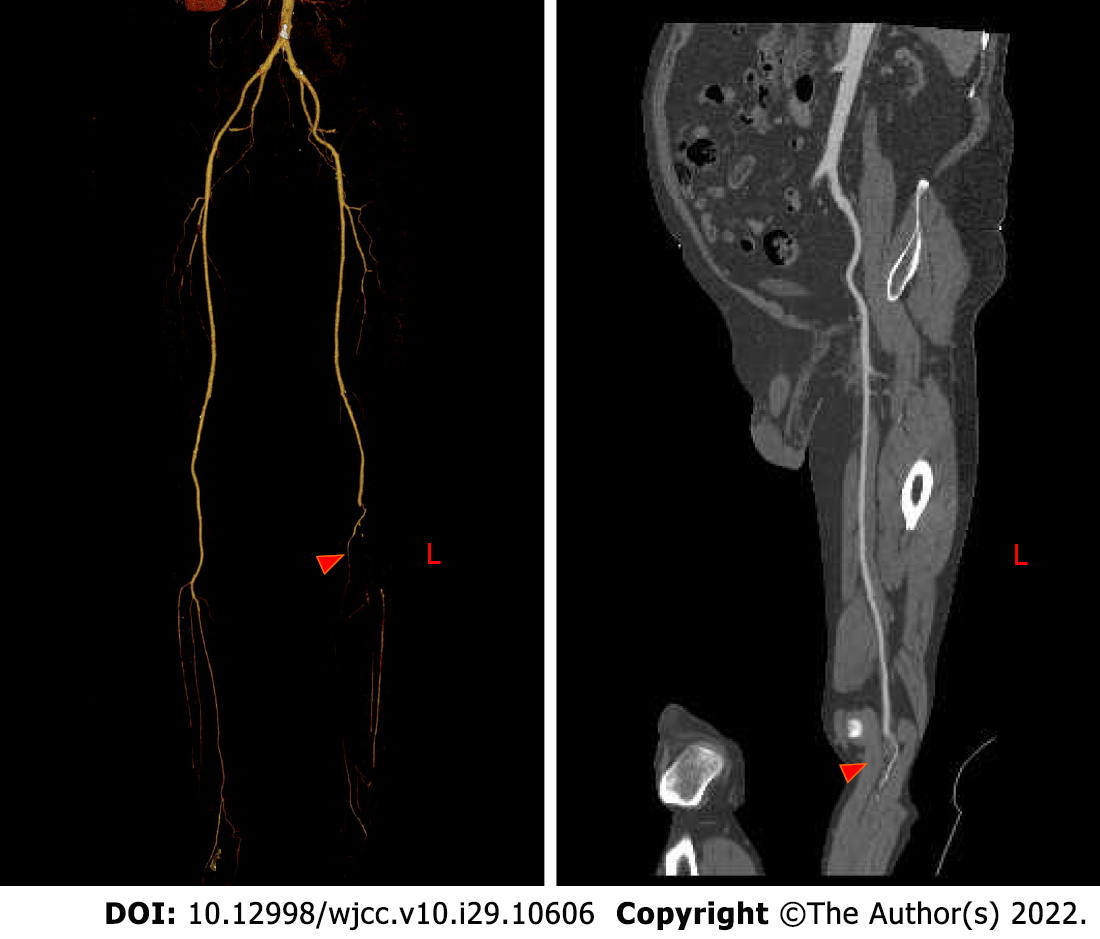 The patient recovered well after the operation. The numbness and weakness of the left lower extremity disappeared, the skin temperature became warmer, and the left popliteal, posterior tibial and dorsal foot arteries were palpable.

Assessment of the pathological specimen was based on microscopic examination. Hematoxylin-eosin staining showed thrombi and many myxoid materials, and free clusters of round and polygonal cells were seen inside, which was consistent with the pathological characteristics of myxoma (Figure 3). Immunohistochemical studies showed that vimentin, calretinin, CD31, and CD34 were positive, while CD68, cytokeratin (CK), CK5/6, and factor 8-related antigen (F8) were negative. Alcian blue staining (AB) and periodic acid Schiff staining (PAS) were also positive (Figure 4). The above pathological findings were consistent with the pathological features of myxoma[5-7]. Combined with the results of preoperative echocardiography and postoperative pathological examination, it can be inferred that the acute lower extremity arterial embolism was caused by shedding of a left CM.

Figure 3 Hematological staining. A: Histologist section shows embolism with thrombus components and mucous background, with scattered sparse cell clusters and multiple villi-like protrusions, which are consistent with the characteristics of soft and brittle taxonomy (1 ×); B: High magnification microscope shows scattered free clusters on a mucus background with nested round, polygonal cells (squamous cells) arranged in short cords, with round nuclei and fine chromatin, and no atypical (10 ×). 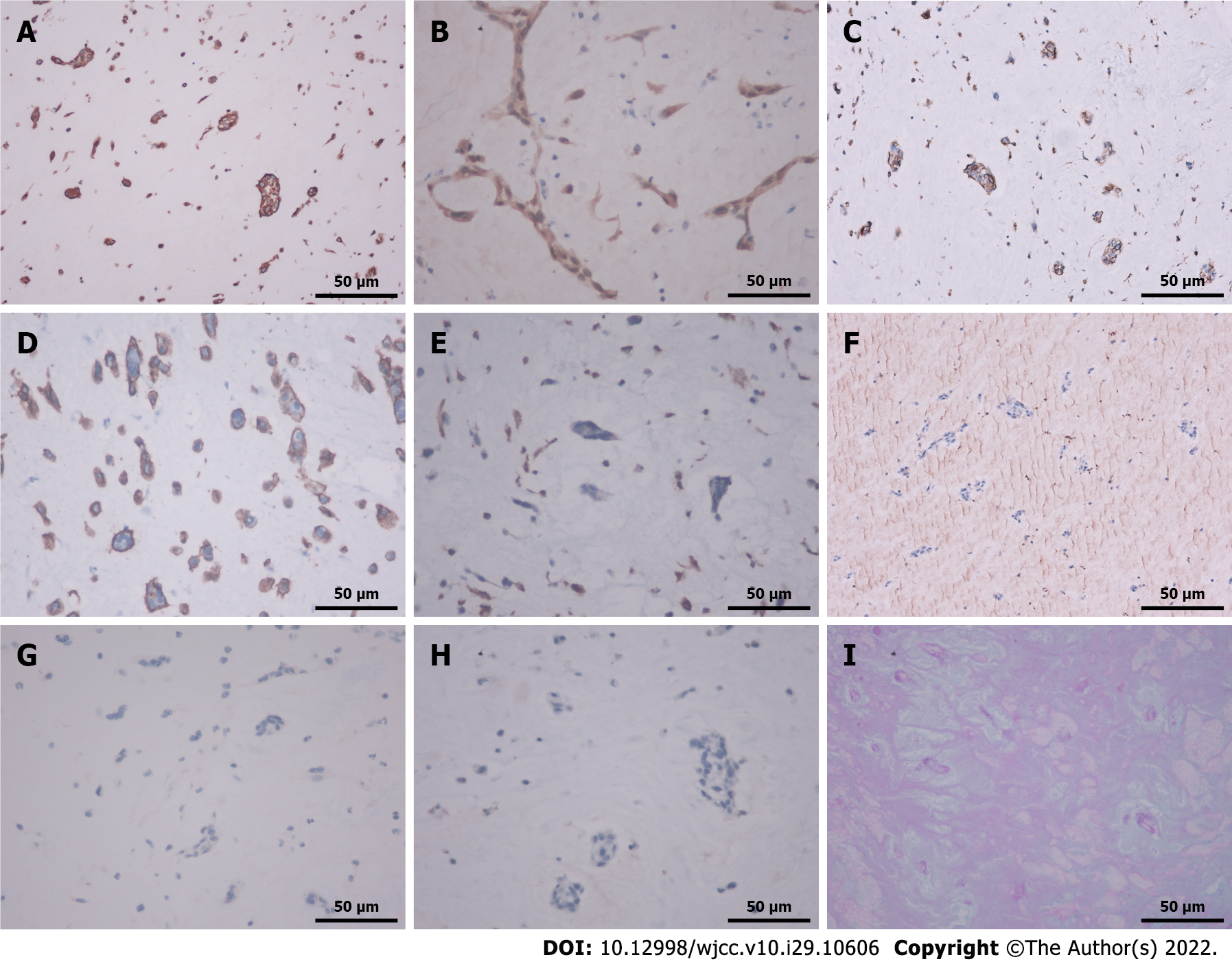 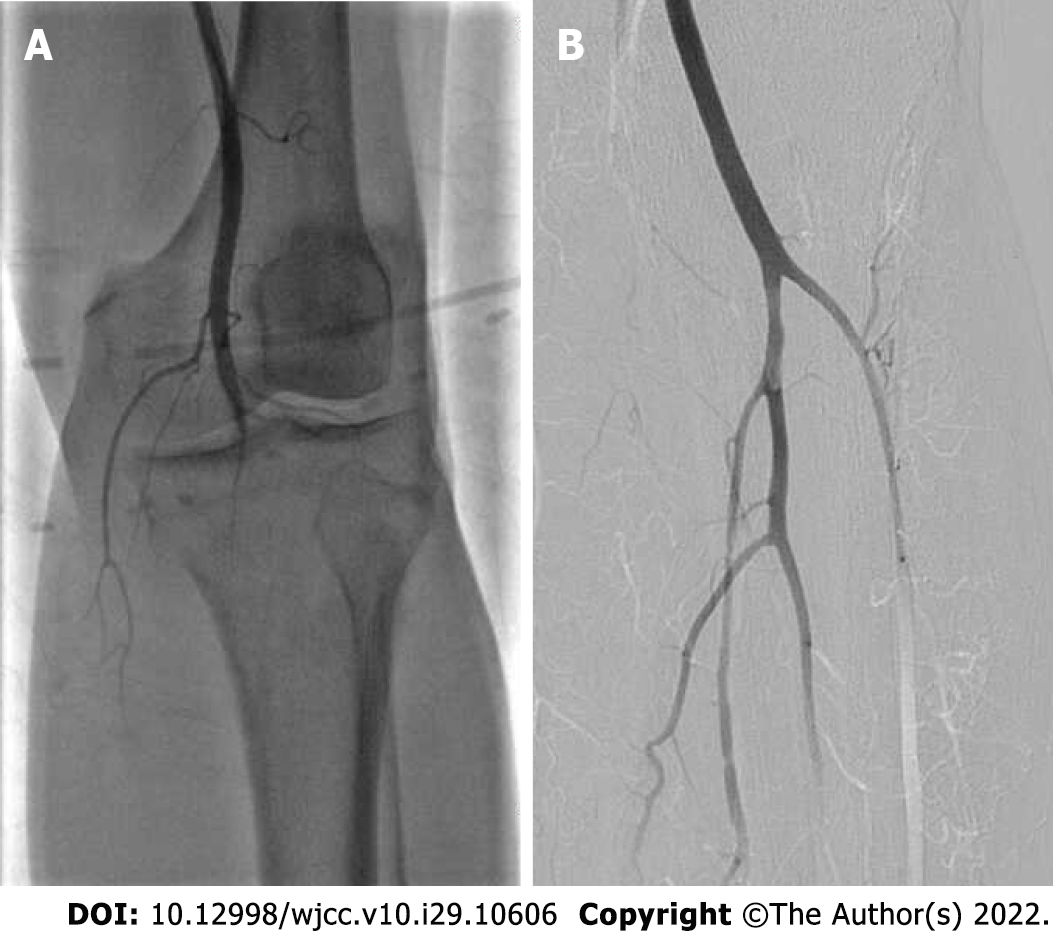 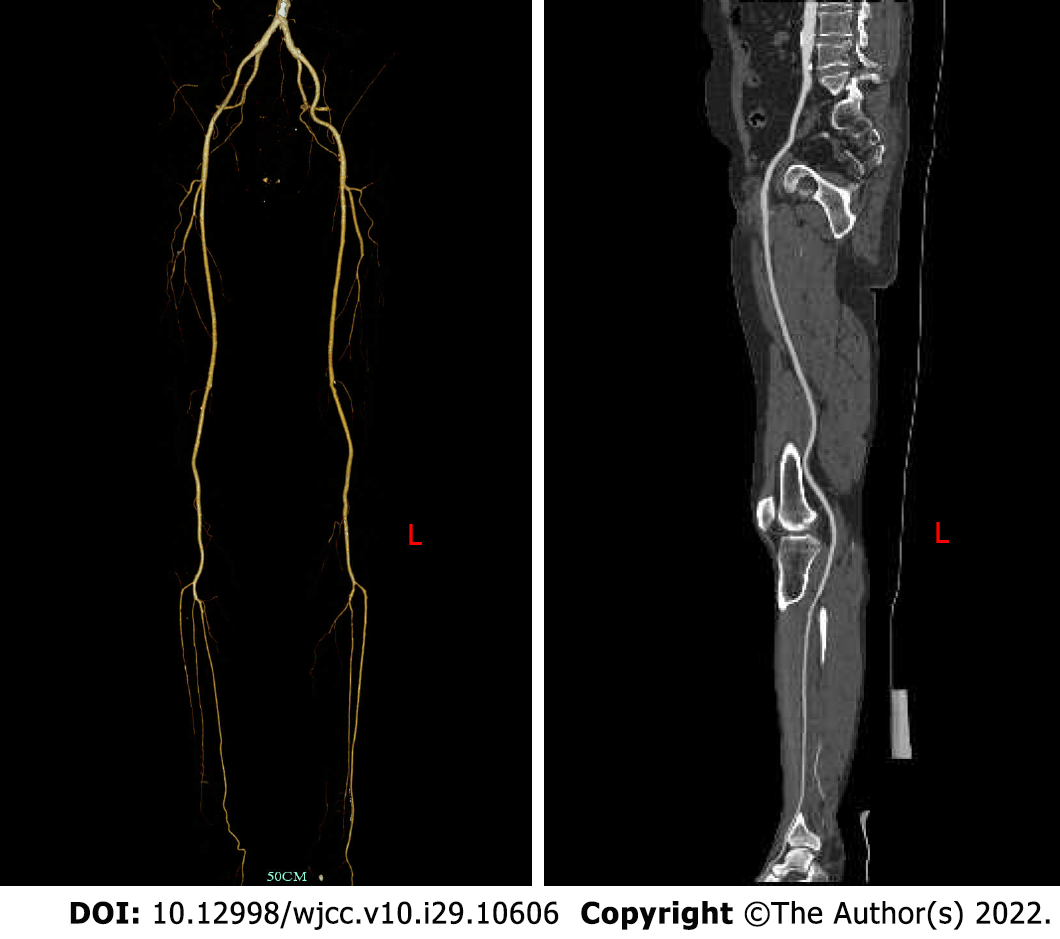 Most CMs occur at the edge of the fossa ovalis, and approximately 10% occur at other sites[8]. The clinical manifestations and signs of CM depend on the location and activity of the tumor. Most left CMs have atypical symptoms, including hemodynamic changes, systemic symptoms, and the triad of peripheral vascular embolism[9]. However, approximately 3.2%-46.4% of patients with CM are asymptomatic[1,10]. CM occurs in all age groups, with an average age of 42-66 years[11]. Familial CM is less frequently reported in younger patients than in older patients. CM is most commonly found in the left atrium; however, unusual locations of CM include the right atrium (0.7% to 7.5%), right ventricle (0.7% to 2.5%), left ventricle (0.7% to 3.6%), and heart valves (less than 1%) [12]. Approximately 72% to 92% of patients have been reported that CM is located in the left atrium by most studies [5].

The diagnosis of CM is based on clinical examination, electrocardiogram, transthoracic echocardiography (TTE), transesophageal echocardiography (TEE), chest computed tomography, and chest or cardiac magnetic resonance imaging, and there is no evidence that a specific blood test is useful in diagnosis. The clinical examination of the patient includes auscultation for possible systolic or diastolic murmurs, which may be heard if the myxoma prolapses or blocks the valve orifice of the heart. Heart murmurs are not specific to CM. Furthermore, concomitant organic heart disease may be confused with CM. There is no standard electrocardiograph diagnosis for CM because arrhythmias are common in other heart diseases [13]. Nevertheless, the accuracy of TTE and TEE in diagnosing CM is as high as 90% to 96%. TTE is the most convenient and useful examination for patients with heart disease, especially cardiac tumors[2]. Echocardiography is the most reliable method for diagnosing left atrial myxoma in every hospital. In conventional clinical practice, it can quickly and safely analyze the structure and location of cardiac tumors. If TTE is unable to identify the nature, structure, and activity of CM, TEE can accurately assess tumor characteristics. The diagnostic test for CM has a high sensitivity of more than 90%[14]. Systemic embolic events have been reported in 30% to 50% of patients with left atrial myxoma, half of which have cerebrovascular involvement. In addition, left atrial myxoma can be repeatedly shed, resulting in recurrent acute lower extremity arterial embolism[4]. Acute limb ischemia is caused by a sudden decrease in limb perfusion that threatens limb vitality, which can lead to loss of sensation, movement, or even a limb, and requires urgent intervention. Of peripheral arterial emboli, 80% have a cardiac origin (rheumatic valve disease, atrial fibrillation, appendicitis, wall thrombus, infective endocarditis, prosthetic valve thrombus, or tumor), and only 1.5% are cardiac tumors that require surgery to save a limb[4,15]. Therefore, accurate and timely diagnosis and treatment are essential to restore normal blood flow. Lower extremity arterial ultrasound and CTA are crucial for the timely diagnosis and assessment of acute lower extremity arterial embolism. Lower extremity arteriotomy, thrombectomy with a Fogarty catheter, and catheter thrombolysis are the first-line interventions for acute lower extremity ischemia[16]. The lower extremity vascular CTA showed mild stenosis of the left superficial femoral artery; the left popliteal artery was not visualized; and the peroneal artery, posterior tibial artery, and proximal end of the anterior tibial artery were occluded. Considering the patient's medical history, it was determined that it was caused by shedding of the emboli of the left atrial myxoma. Echocardiography showed multiple abnormal echo groups in the left atrium, and the intraoperative findings and postoperative pathology were essentially consistent with the preoperative examination. Pathological immunohistochemical results showed that the emboli stained positive for vimentin, calretinin, CD31 and CD34 but were negative for CD68, CK, CK5/6 and F8. In addition, AB and PAS were positive, and the above results are consistent with the pathological characteristics of CM[5-7].

Although rare, myxoma is a unique cause of acute arterial embolism that needs to be fully recognized. Systemic anticoagulation and immediate surgical thrombectomy are first-choice treatments for acute lower extremity arterial embolism. Early surgical tumor resection is the main treatment method to prevent further cardiovascular complications[4]. CM is an identifying indicator in patients with acute limb ischemia presenting to the emergency department, and the timely use of bedside echocardiography can aid in diagnosis and reduce intervention time, which is crucial for a good prognosis in such cases.

CM, although rare, is a unique cause of acute arterial embolism, and echocardiography and arterial CTA are critical for the timely diagnosis of this disease. We report a rare case of this type and provide insights into the diagnosis and treatment of acute lower extremity arterial embolism caused by shedding of the left CM. We hope that by improving the recognition of the disease, we can reduce intervention time and thus avoid delays in diagnosis and treatment.

We thank all the histology technologists at the Department of Pathology, Hangzhou First People’s Hospital for their technical support.