To compare the outcomes of scar revision surgery and double diamond-shaped flap anoplasty. 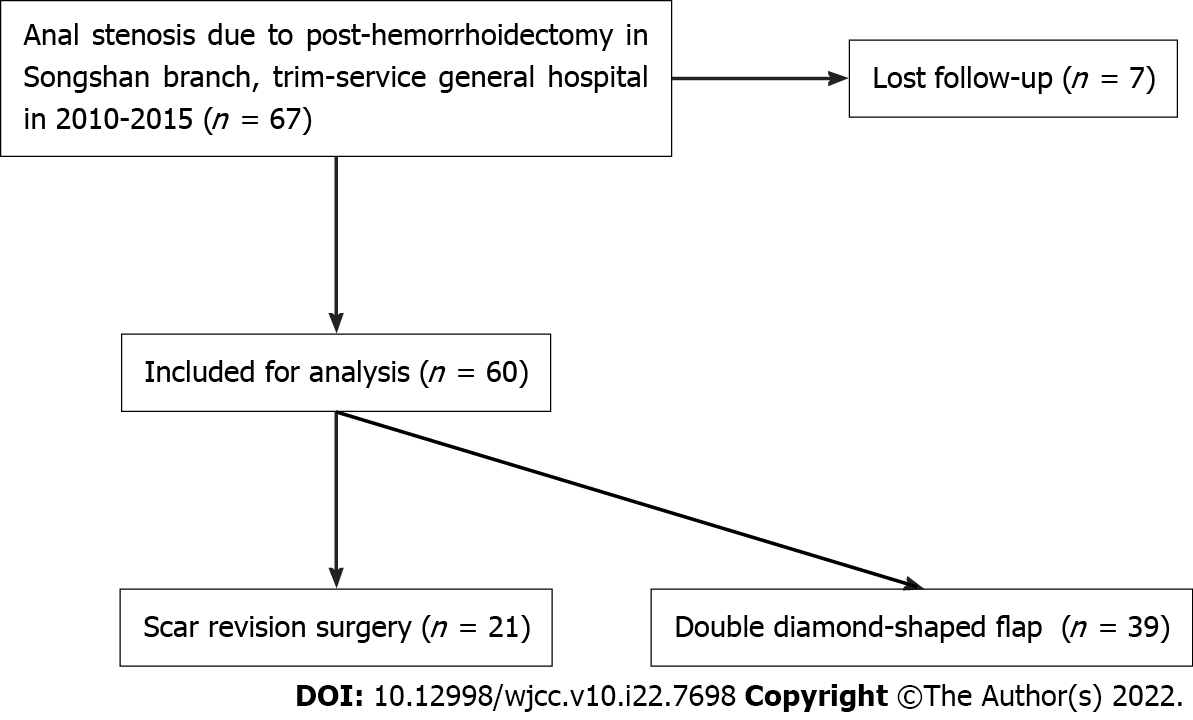 Figure 1 Selection process of the patients in the study.
Preoperative management 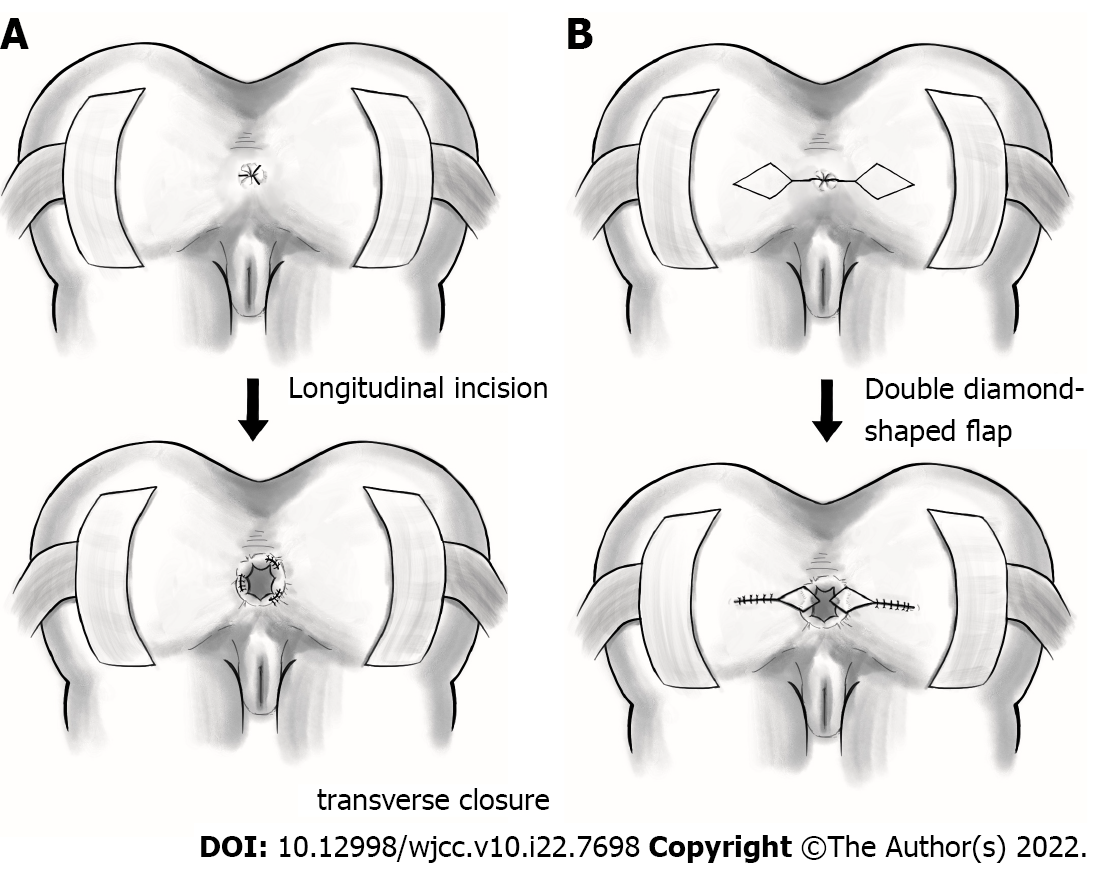 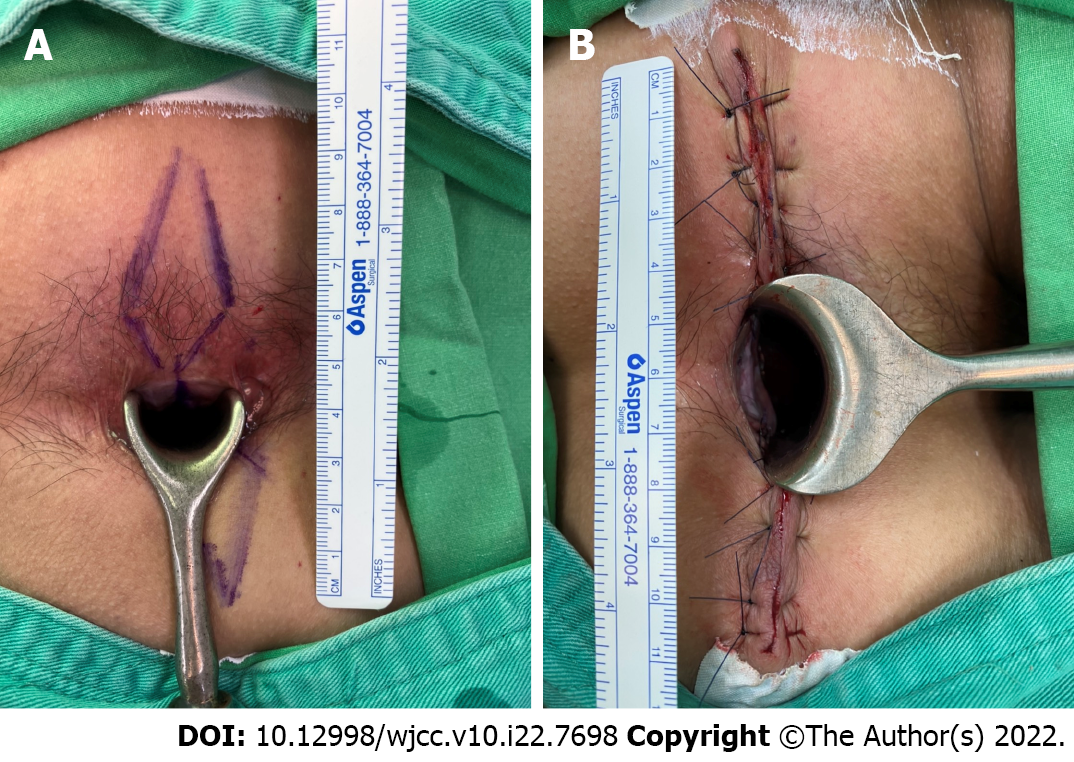 Before discharge, the operative time, length of hospital stay, and postoperative complications were recorded. The patients underwent scheduled clinical and proctologic examinations at the outpatient clinic 1, 2, and 4 wk after surgery. Subsequently, regular inspections were performed upon patient request. Patients were contacted by telephone after 6 mo and were invited to the outpatient clinic for a final follow-up evaluation. During their postoperative workups, the patients underwent clinical and proctologic evaluations during which the following variables were collected: postoperative symptoms, postoperative adjuvant therapy, recurrence, and postoperative quality of life. Recurrence was defined as experiencing symptoms of anal stenosis that could not relieved by conservative treatment. The patients’ postoperative quality of life was assessed using a satisfaction questionnaire that comprised a 10-point rating scale ranging from 1 (poor) to 10 (excellent). The satisfaction scores were grouped into four categories: excellent (8-10), good (6-7), same (3-5), and poor (1-2).

The patients’ characteristics are summarized as total numbers, percentages, and means ± standard deviations. Student’s t-test for paired samples was used to detect differences in the means of continuous variables over time. Statistical significance was set at a P-value < 0.05. The SPSS software for Windows, version 22.0 (IBM Corp., Armonk, NY, United States) was used to perform the statistical analyses.

The perioperative results are shown in Table 2. The mean operative times for scar revision surgery was significantly shorter for that for double diamond-shaped flap anoplasty (10.14 ± 2.31 [range: 7-15] min vs 21.62 ± 4.68 [range: 15-31] min; P < 0.001). The average of length of hospital stay was also significantly shorter in the former group (2.1 ± 0.3 d) than in the latter (2.9 ± 0.4 d; P < 0.001). Four patients in the double diamond-shaped flap group underwent urinary catheterization because of urinary retention, but the difference in this complication between the two groups was not significant (P = 0.129). None of the patients in our study experienced wound dehiscence, wound infection, postoperative fever, or postoperative bleeding.

Finally, we investigated the postoperative conditions of the patients after 6 mo (Table 3). Two patients of moderate anal stenosis in the scar revision surgery group had strained defecation and one had incomplete evacuation; these were considered recurrence. None of the patients in the anoplasty group had any postoperative symptoms or required adjuvant therapy (i.e., there were no recurrences in this group). On their postoperative satisfaction questionnaires, 45 patients (75%) reported excellent satisfaction scores, whereas 13 (21.7%) and 2 (3.3%) reported good satisfaction and no change, respectively; the latter two were those who experienced recurrences. Importantly, there were a significant difference in satisfaction between the two groups (P = 0.035), with more satisfaction in double diamond-shaped flap anoplasty group.

There are numerous procedures described in the literature regarding anoplasty for anal stenosis, and the choice of the surgery depends on the surgeon’s experience as well as the severity of the stricture[6,12,17,26]. No single procedure is superior to others, and it is difficult to evaluate the outcomes of the various techniques owing to the lack of adequate prospective trials[12]. We selected the double diamond flap anoplasty technique because of its good long-term results and low complication rates, as well as our departmental experience with this procedure. Moreover, this method is performed on both sides of the anus simultaneously, which can ameliorate the stenosis remarkably. After the anoplasty procedure, the postoperative quality of life improved greatly, and none of the patients required adjuvant therapy or experienced recurrences.

However, we found that the length of hospital stay was significantly longer in the double diamond flap anoplasty group than in the scar revision surgery group. Given that the anoplasty produced a larger operative wound, it is likely that more pain control medication is required in this group. The number of postoperative complications associated with urinary retention was also higher in the anoplasty group, even though this group experienced better performance than the scar revision surgery group in terms of quality of life improvement, recurrence rate, and the need for postoperative adjuvant therapy. 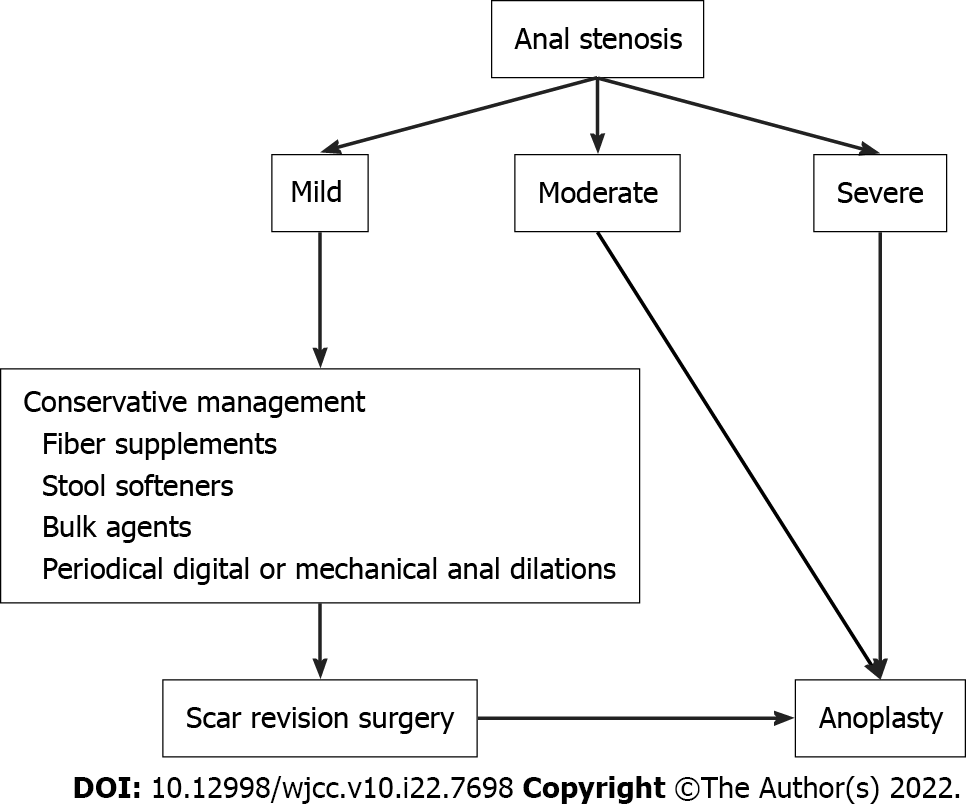