Varicella-zoster virus (VZV) generally causes chickenpox at first infection in childhood and then establishes latent infection in the dorsal root ganglia of the spinal cord or other nerves. Virus reactivation owing to an impaired immune system causes inflammation along spinal nerves from the affected spinal segment, leading to skin manifestations (herpes zoster). Viremia and subsequent hematogenous transmission and nerve axonal transport of the virus may lead to meningitis, encephalitis, and myelitis. One such case is described in this study.

A 64-year-old man presented with dysuria, pyrexia, and progressive disturbance in consciousness. He had signs of meningeal irritation, and cerebrospinal fluid (CSF) analysis revealed marked pleocytosis with mononuclear predominance and a CSF/serum glucose ratio of 0.64. Head magnetic resonance imaging revealed hyperintense areas in the frontal lobes. He had four isolated blisters with papules and halos on his right chest, right lumbar region, and left scapular region. Infected giant cells were detected using the Tzanck test. Degenerated epidermal cells with intranuclear inclusion bodies and ballooning degeneration were present on skin biopsy. Serum VZV antibody titers suggested previous infection, and the CSF tested positive for VZV-DNA. He developed paraplegia, decreased temperature perception in the legs, urinary retention, and fecal incontinence. The patient was diagnosed with meningitis, encephalitis, and myelitis and was treated with acyclovir for 23 days and prednisolone for 14 days. Despite gradual improvement, the urinary retention and gait disturbances persisted as sequelae.

VZV reactivation should be considered in differential diagnoses of patients with sporadic blisters and unexplained central nervous system symptoms.

Core Tip: We describe a rare case of multiple central nervous system (CNS) complications following varicella zoster virus (VZV) reactivation in an immunocompetent patient with mild diabetes. He had four isolated blisters with encephalitis, meningitis, and myelitis. VZV reactivation should be considered in the differential diagnosis of patients with sporadic blisters and unexplained CNS symptoms.

The varicella-zoster virus (VZV) generally causes chickenpox at its first infection in childhood and then establishes latent infection in the dorsal root ganglia of the spinal cord or other nerves[1]. When reactivated owing to impaired systemic immune function, the virus causes inflammation along the spinal nerves from the spinal segment affected by the latent infection, leading to skin manifestations (herpes zoster)[1]. Viremia and subsequent hematogenous transmission and nerve axonal transport of the virus may lead to meningitis, encephalitis, and myelitis[2].

Upon VZV reactivation, viremia is usually absent[3], and viral particles are transported via the nerves. However, in immunocompromised hosts, skin lesions can be more extensive and severe, and viral replication in epithelial cells may result in viremia[4]. In severely immunocompromised hosts, VZV can be disseminated to the lungs, liver, central nervous system (CNS), and other tissues. Myelitis is a relatively common complication of herpes zoster[5] and is considered to be caused by the spread of VZV from the dorsal root ganglia to the spinal cord at the spinal level affected by skin rashes[6].

Here, we report about a very rare case of concurrent meningitis, encephalitis, and myelitis caused by VZV reactivation in a patient with just a few blisters.

The patient was a 64-year-old man. He was transported by ambulance with urinary retention and pyrexia of > 38 °C that persisted for several days as well as progressive disturbance in consciousness.

He did not have regular health checkups and there was no significant medical history. He had an uncertain history of chickenpox in childhood and no history of varicella vaccination. He tested negative for human immunodeficiency virus (HIV) and had no history of bone marrow transplantation or other known conditions associated with immunosuppression.

He had consumed 540 mL of Japanese sake (60 g of alcohol) and smoked 20 cigarettes per day since the age of 20 years.

The patient’s body temperature was 37.2 °C, blood pressure was 182/107 mmHg, heart rate was 106 beats/min and regular, and his respiratory rate was 21 breaths/min; and SpO2 of 99% in room air. Neurological examination showed a Glasgow Coma Scale score of E4V3M5, pupils equal in size (3 mm/3 mm), round, and reactive to light (+/+), positive nuchal rigidity, and negative Kernig’s sign. The tendon reflexes were markedly increased, predominantly in the lower extremities, with a positive Babinski sign bilaterally. There was no obvious quadriplegia.

Figure 1 The skin lesion on the right chest.
Laboratory examinations

We detected infected giant cells using the Tzanck test and degenerated epidermal cells with intranuclear inclusion bodies and ballooning degeneration on skin biopsy of blisters in the right chest (Figure 2); these findings were consistent with VZV infection. 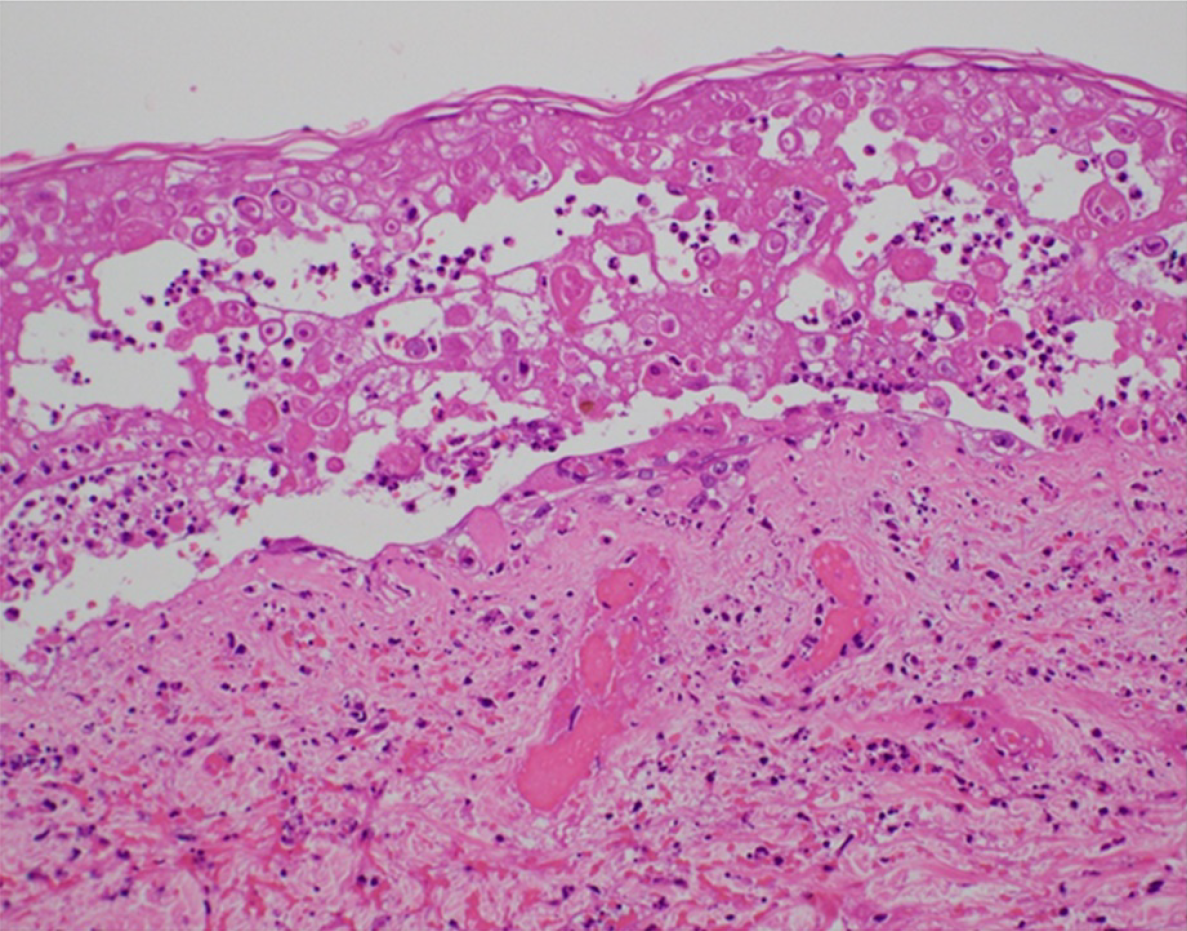 Figure 2 Skin biopsy of the lesion on the right chest. The lesion shows intranuclear inclusion bodies and ballooning degeneration.

Mild increase in blood glucose levels (174 mg/dL) and HbA1c level (6.8%) suggestive of diabetes were noted. No increase in inflammatory response was observed (White blood cell count 5800 cells/µL, C-reactive protein 0.15 mg/L). There was no evidence of impaired humoral immunity with a negative HIV antibody test. Serum VZV antibody titers were 75.9 (+) for VZV immunoglobulin G (IgG) (EIA) and 0.49 (−) for VZV immunoglobulin M (IgM) (EIA), which is a pattern indicative of a previous infection. Cerebrospinal fluid (CSF) analysis (Table 1) showed marked pleocytosis with mononuclear predominance, with no decrease in the CSF/serum glucose ratio (0.64). The CSF tested positive for VZV-DNA with 1.4×106 copies/mL.

For symptoms associated with frontal lobe disorders such as altered personality and talkativeness that occurred after admission, the patient underwent plain head magnetic resonance imaging (MRI) on hospital day 3 (Figure 3). Diffusion-weighted imaging revealed hyperintensities in the bilateral frontal lobes. Although not evident immediately after admission, paraplegia became apparent after private room isolation was discontinued and rehabilitation was started. Decreased thermal nociception and urinary retention and rectal disturbances were also noted. 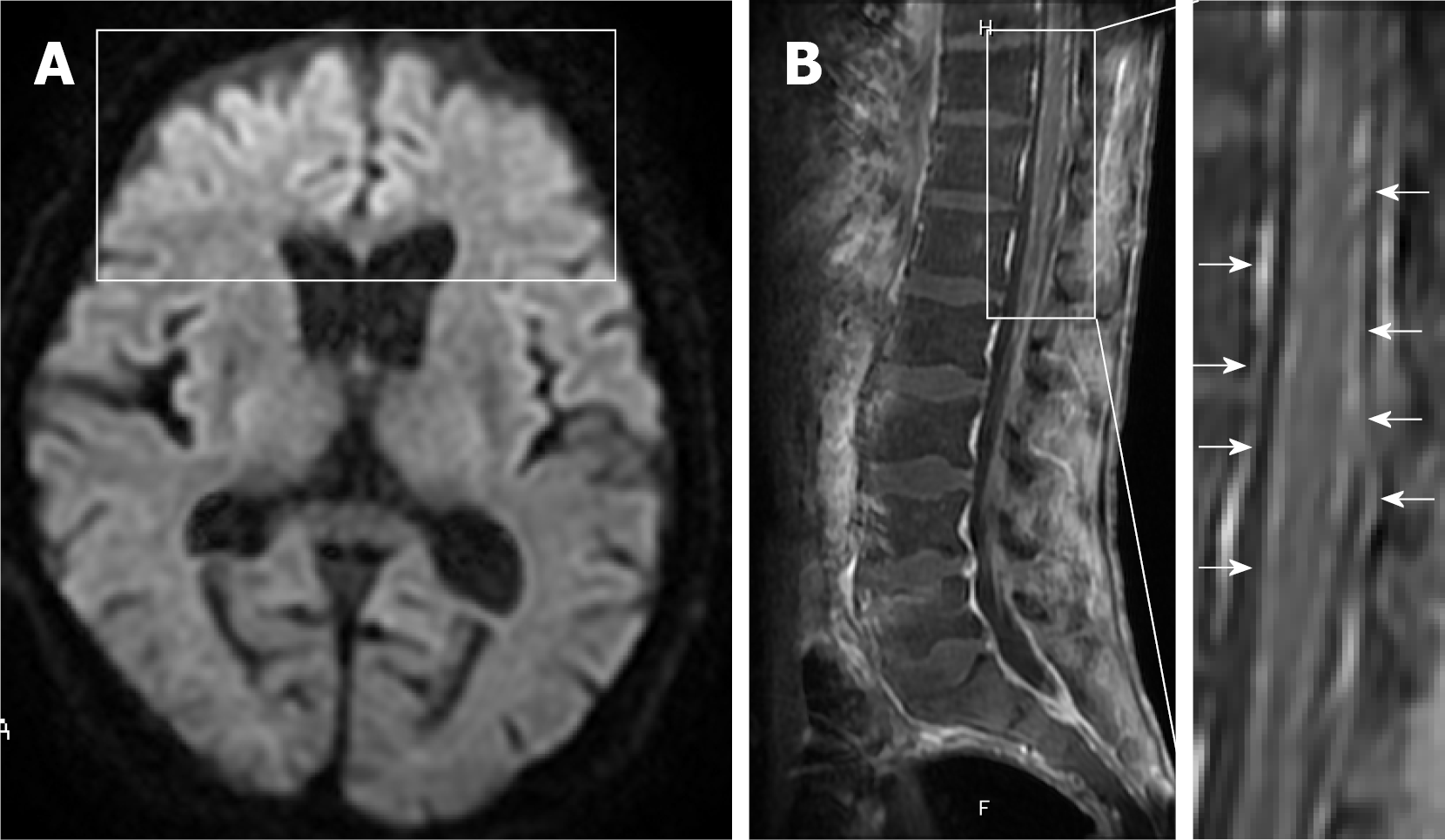 Based on these findings, we diagnosed meningitis, encephalitis, and myelitis caused by VZV reactivation.

Treatment was initiated with 500 mg acyclovir intravenously three times a day (for 23 days) and prednisolone at 60 mg (1.5 mg/kg)/d (tapered, for 14 days), resulting in a gradual improvement of symptoms.

Changes in the serum VZV antibody titer and CSF analysis results are shown in Table 2. Results of the CSF analysis showed a steady decrease in cell count, and on hospital day 16, the CSF was confirmed to be negative for VZV-DNA. The CSF VZV antibody titer increased more than 8-fold. Regarding serum VZV antibody titers, a significant increase in IgG was noted, whereas no apparent IgM seroconversion was observed. Symptoms of frontal lobe disorders improved with treatment. Plain head MRI performed on hospital day 39 revealed the disappearance of the frontal lobe hyperintensities. The patient continued rehabilitation and showed a slight improvement in condition. However, the urge to urinate did not recover. In addition, gait disturbance and urinary retention associated with myelitis persisted as sequelae.

In this case report, the patient with mild diabetes but no apparent immunodeficiency developed meningitis, encephalitis, and myelitis owing to VZV reactivation. This was a very rare case with only sporadic blisters accompanied by multiple CNS complications. CNS involvement has been reported as a rare complication of VZV infection, with an incidence of 0.1%–0.3% and 35% in immunocompetent and immunocompromised individuals, respectively[8]. Our literature search found only a few cases of multiple CNS complications caused by VZV, including eight cases of concurrent meningitis, encephalitis, and myelitis[8-14].

The early detection of blisters on emergency arrival led to a strong suspicion and early diagnosis of VZV meningitis in our case. Concurrent myelitis was diagnosed based on the diagnostic criteria proposed by the Transverse Myelitis Consortium Working Group[7] although contrast-enhanced MRI of the thoracolumbar spine showed no clear enhancement of the spinal cord. Despite the prompt initiation of treatment with acyclovir and steroid, gait disturbance and urinary retention associated with myelitis persisted as sequelae.

VZV reaches the nervous system either via the bloodstream or by spreading directly from the sensory ganglia, where the virus establishes latent infection, causing CNS complications[23]. In herpes zoster, VZV that is reactivated in the dorsal root ganglia can spread to the spinal cord at the level affected by skin rashes, resulting in myelitis[6]. In our case, the skin rash did not occur along the dermatome as it does in herpes zoster. It appeared in a similar way to chickenpox where the skin areas innervated by the spinal cord, and the level of rash did not match.

Table 3 compares the eight previously reported cases[8-14] of concurrent meningitis, encephalitis, and myelitis caused by VZV reactivation with our case. Although CNS complications of VZV infection are more common in immunocompromised individuals, no underlying disease was identified in three cases. These patients had no predisposing factors for immunosuppression, such as acquired immunodeficiency syndrome, prior organ transplant, or use of oral immunosuppressants. Therefore, it is likely that decreased immunity caused by aging and other factors led to the reactivation of VZV. Among the previously reported cases, only one patient had a skin rash with C8-Th3 distribution[9]. The other seven patients presented neurological complications of VZV without skin symptoms, which is consistent with zoster sine herpete (ZSH)[24]. Our patient had only four sporadic blisters with no band-like cluster of skin eruptions. Bilateral blisters are an uncommon dermic manifestation of VZV in geriatrics, but his disseminated herpes zoster caused bilateral sporadic skin eruptions. The simultaneous onset of meningitis, encephalitis, and myelitis could occur in immunocompetent patients, with none or a few eruptions rather than typical herpes zoster.

The skin rash in our patient appeared like a chickenpox rash, and the possibility of reinfection with VZV was also considered. However, a high serum VZV-IgG level on admission and the absence of VZV-IgM seroconversion over time suggested that VZV reactivation was more likely the cause. Generally, herpes zoster does not manifest itself in an immunocompetent host, and whether lesions are formed depends on the host’s immune status. In the event of virus reactivation, individuals with an active immune system may develop ZSH with only prodromal pain and no skin lesions. A previous report documented that 44% of patients with VZV infection in the CNS had no skin rash[25]. In ZSH, CD4+ T cells and CD8+ memory T cells expressing skin-homing receptors are considered to provide innate immunity to suppress the spread of VZV between skin cells, thereby preventing skin rash manifestation[26]. The number of skin eruptions caused by VZV correlates with the amount of virus in circulation before their manifestation[27], and therefore, delayed occurrence of an immune response can lead to the deeper and broader spread of the viral infection and severe lesions. The number and severity of skin eruptions were low in our patient, probably owing to the low viral load in circulation because the skin eruptions were caused by reactivation, not reinfection, of the virus from the previous infection.

Patients with mild skin rash may develop severe illness, similar to our patient. This highlights the importance of early recognition of blisters through skin examination of the entire body and considering VZV infection as a differential diagnosis even if the patient has isolated and sporadic blisters. It is also important to consider VZV infection when diagnosing a patient with unexplained CNS symptoms.

We reported a rare case of concurrent meningitis, encephalitis, and myelitis owing to VZV reactivation in a 64-year-old patient with mild diabetes but with no apparent immunodeficiency. The patient had a small number of blisters. Based on our case findings, VZV infection should be considered a differential diagnosis in patients with sporadic blisters or unexplained CNS symptoms.