Enteric-coated medications are supposed to pass intact through the gastric environment and to release the drug content into the small intestine or the colon. Before dissolution of the enteric coating, they may appear hyperdense on computed tomography (CT). Unfortunately, few reports have been published on this topic so far. In this case report, the hyperdense appearance on contrast-enhanced CT of an enteric-coated mesalamine tablet was initially misinterpreted as a jejunal gastrointestinal stromal tumor (GIST).

An asymptomatic 81-year-old male patient, who had undergone laparoscopic right nephrectomy four years earlier for stage 1 renal carcinoma, was diagnosed with a jejunal GIST at the 4-year follow-up thoraco-abdominal CT scan. He was referred to our hub hospital for gastroenterological evaluation, and subsequently underwent 18-fluorodeoxyglucose positron emission tomography, abdominal magnetic resonance imaging, and video capsule endoscopy. None of these examinations detected any lesion of the small intestine. After reviewing all the CT images in a multidisciplinary setting, the panel estimated that the hyperdense jejunal image was consistent with a tablet rather than a GIST. The tablet was an 800 mg delayed-release enteric-coated oral mesalamine tablet (Asacol®), which had been prescribed for non-specific colitis, while not informing the hospital physicians.

Delayed-release oral mesalamine (Asacol®), like other enteric-coated medications, can appear as a hyperdense image on a CT scan, mimicking a small intestinal GIST. Therefore, a detailed knowledge of the patients’ medications and a multidisciplinary review of the images are essential.

Core Tip: Enteric-coated tablets may appear as hyperdense images on computed tomography (CT) scan, and lead to misdiagnosis, for example of small intestinal gastrointestinal stromal tumors which usually show homogeneous enhancement on contrast-enhanced CT phases. Therefore, when observing small hyperdense lesions in the gastrointestinal tract on CT scan, physicians should be aware of possible radiopaque medications. A perfect knowledge of the patients’ medical treatment (even occasional) and a multidisciplinary review of all the images are essential to avoid misdiagnosis and unnecessary investigations.

Enteric-coated tablets pass intact through the gastric environment, and release the drug content into the small bowel or the colon. Enteric-coating polymers have long been known to be radiopaque to some degree[1], and their computed tomography (CT) density can be high, even though this has little been reported so far in the literature.

Gastrointestinal stromal tumors (GISTs) are a group of mesenchymal tumors of the digestive tract that originate from the interstitial cells of Cajal; approximately 30% of them are malignant. GISTs usually appear as sharply demarcated submucosal or subserosal lesions within the gastrointestinal tract[2]. CT often provides both diagnosis and staging; after intravenous contrast, small-sized intestinal GISTs typically display strong homogeneous enhancement[3,4].

This report shows a case in which the hyperdense appearance on contrast-enhanced CT of an enteric-coated delayed-release oral mesalamine tablet was misinterpreted as a small jejunal GIST.

An 81-year-old male patient was referred to our surgical outpatient clinic for a suspected jejunal GIST detected on thoraco-abdominal CT.

The patient was free of any symptom. Thoraco-abdominal CT scan was performed in another hospital as part of the follow-up of a previous renal cell carcinoma.

The patient’s past medical history included hypertension, colonic diverticulosis, and right laparoscopic nephrectomy four years earlier for stage 1 renal cell carcinoma[5]; there had been no adjuvant chemotherapy, and no recurrence was detected at follow-up.

No significant family histories were identified.

The patient was in good condition with weight within the normal range (body mass index: 22.4 kg/m2). Physical examination was absolutely normal. There was no abdominal mass on palpation.

Routine laboratory tests, including tumor markers, were all within the normal range.

Thorax-abdomen CT scan revealed an 18 mm x 8 mm lesion in the wall of a jejunal loop, which displayed strong homogeneous contrast enhancement in the arterial and venous phases (250 Hounsfield Unit)[6] (Figure 1B and C), while it was isodense and barely visible in the pre-contrast and delayed-contrast phases (Figure 1A and D). In the CT report, the lesion was described as consistent with a GIST. Thus, the oncologist referred him to our hub hospital for gastroenterological assessment. This included 18-fluorodeoxyglucose positron emission tomography and abdominal magnetic resonance imaging, which both failed to detect any abnormal image. The patient also underwent gastroscopy, which was normal, and colonoscopy, where two adenomatous polyps of the right colon were resected, with low-grade dysplasia on pathological examinations. Finally, video capsule endoscopy was also carried out and did not record any small-intestinal lesion. 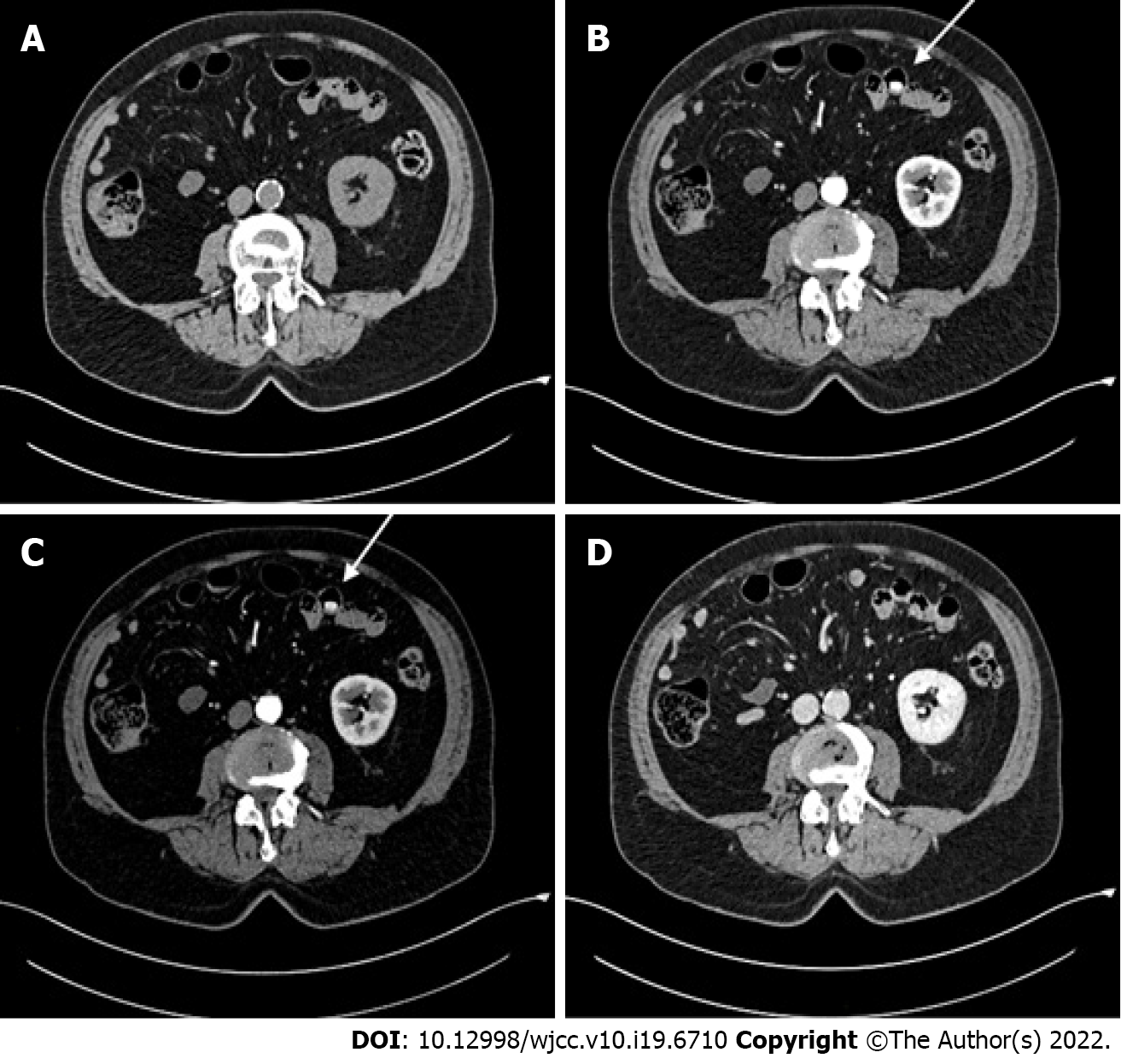 When reviewing the CT scan with the radiologists, hyperdense jejunal images were also visible in the pre-contrast and delayed-contrast phases (Figure 2), more proximal and distal respectively than the image initially reported at the arterial and venous acquisition phases. The dimensions and the CT density, on the other hand, were the same. This led to suspect a foreign body rather than a GIST.

A thorough medical history revealed that the patient had recently been prescribed delayed-release oral mesalamine 800 mg tablets (Asacol®) for non-specific colitis. The CT scan hyperdense images were consistent with images expected for an enteric-coated tablet.

As the initial diagnosis of GIST was ruled out, no treatment was requested. Follow-up was continued as previously planned.

The 5-year follow-up thoraco-abdominal CT scan was performed after discontinuation of mesalamine and did not reveal any abnormal image, which further confirmed our reassessment of the case. Laboratory tests and tumor markers were still normal. Physical examination was normal as well.

Oral delayed-release mesalamine is an enteric-coated formulation releasing mesalamine in the terminal ileum and the colon; it is effective for mild to moderately active ulcerative colitis and active Crohn’s disease[7]. Like other enteric-coated medications, it may appear hyperdense on CT scan, before dissolution of the enteric coating. Nevertheless, there are few reports in the literature on this topic and no specific restrictions on its administration before abdominal imaging. Sieron et al[8] recently investigated the CT density of frequently administered medications, but mesalamine was not included. A few cases have been reported in which the hyperdensity of a tablet led to a misdiagnosis, involving unnecessary investigations; the medications in question, however, were mainly iron[9] and potassium tablets[10,11].

GISTs can occur anywhere along the gastrointestinal tract, most commonly in the stomach and small bowel. Small GISTs (< 2 cm) can be endoluminal and are often an incidental finding at CT, showing clear-cut shape and strong homogeneous contrast enhancement[12]. In particular, contrast enhancement has been reported to be inversely proportional to tumor diameter in intestinal GISTs[4]. This actually explains how a hyperdense tablet could have been misinterpreted as a small jejunal GIST on contrast-enhanced CT scan. We report here for the first time a diagnostic error caused by the hyperdense appearance of a delayed-release mesalamine tablet.

In this case, however, the radiologist who first examined the images did not notice that the lesion was also visible on the pre-contrast scan, although in another jejunal loop. When hyperdense lesions are observed on contrast-enhanced CT, it is essential to determine their presence or absence in the pre-contrast phase. In particular, if these lesions are gastric or intestinal, they should be carefully researched along the entire gastrointestinal tract; in fact, due to peristalsis, small foreign bodies may be found at slightly different levels during the different phases of the CT scan[13].

Along with the initial radiological assessment, it is crucial to address two other key points that could have helped the diagnostic process.

Firstly, the gastroenterologist who evaluated the patient had not obtained the CT images from the hospital where the examination had been performed, and decided to perform additional examinations on the basis of the CT report only. It is well recognized that obtaining all the images - and not just the report - of radiological examinations performed elsewhere is associated with higher quality of care[14]. Moreover, it has been shown that just including at least the most relevant images in the radiology reports is associated with higher physicians' confidence in decision-making and possibly changes in patient management[15]. Therefore, when a patient is referred from another center, the admitting physicians should be provided the images of all previous examinations, and easily request a second reading by another radiologist or a multidisciplinary assessment in case of any doubt. In the present case, such a procedure would have avoided unnecessary examinations.

Secondly, none of the four involved physicians (radiologist, oncologist, gastroenterologist, and surgeon) was aware that the patient had been taking mesalamine for some weeks. Patients’ occasional pharmacological treatments may not be readily available during outpatient visits, and patients tend to forget or underreport them, giving priority to everyday routine treatments. This is why occasional medications should be thoroughly investigated as part of the pharmacological history, and always reassessed before instrumental examinations. In this case report, information about the patient’s recent treatment with an enteric-coated tablet would definitely have helped in properly interpreting the CT scan.

Delayed-release mesalamine, like other enteric-coated preparations, is hyperdense on CT scan and may lead to misdiagnosis, for example of a small intestinal GIST. Therefore, when small hyperdense lesions in the gastrointestinal tract are detected, physicians should rule out radiopaque medications, by thoroughly investigating the patient’s medical treatment (even occasional), and possibly performing a multidisciplinary imaging review.