Many ant species can harm humans; however, only a few cause life-threatening allergic reactions. Normally, reactions caused by ants occur in patients who come into contact with ant venom. Venom contains various biologically active peptides and protein components, of which acids and alkaloids tend to cause anaphylaxis. Ant venom can cause both immediate and delayed reactions. The main histopathological changes observed in ant hypersensitivity are eosinophil recruitment and Th2 cytokine production.

A 70-year-old man was bitten by a large number of ants when he was in a drunken stupor and was hospitalized at a local hospital. Five days later, because of severe symptoms, the patient was transferred to our hospital for treatment. Numerous pustules were observed interspersed throughout the body, with itching and pain reported. He had experienced fever, vomiting, hematochezia, mania, soliloquy, sleep disturbances, and elevated levels of myocardial enzymes since the onset of illness. The patient had a history of hypertension for more than 1 year, and his blood pressure was within the normal range after hypotensive drug treatment. He had no other relevant medical history. Based on the clinical history of an ant bite and its clinical manifestations, the patient was diagnosed with an ant venom allergy. The patient was treated with 60 mg methylprednisolone for 2 d, 40 mg methylprednisolone for 3 d, and 20 mg methylprednisolone for 2 d. Oral antihistamines and diazepam were administered for 12 d and 8 d, respectively. Cold compresses were used to treat the swelling during the process. After 12 d of treatment, most pustules became crusts, whereas some had faded away. No symptoms of pain, itching, or psychological disturbances were reported during the follow-up visits within 6 mo.

This case report emphasizes the dangers of ant stings.

Core Tip: Ant sting allergies tend to be overlooked because their symptoms are usually mild and common. Although cases of ant sting allergies have been reported worldwide, cases involving a large number of ant stings occurring in one patient are rarely reported. The effect of injecting a large amount of venom into an elderly individual and its allergenicity should not be underestimated. This case report highlights the importance of defending against the dangers of ant stings, and emphasizes that basic knowledge of ants, ant venom, and ant sting allergies should be enhanced.

Ants, of the order Hymenoptera and family Formicidae, are social insects with 21 subfamilies and more than 13000 species[1]. Approximately 1900 ant species in 16 subfamilies have a stinging apparatus, and approximately 19 ant genera can cause venom allergy in humans[1,2]. Most stinging ants are not aggressive, and only four genera cause anaphylactic reactions and fatalities[1]. Nevertheless, stinging by Hymenoptera accounts for more than 10% of all anaphylactic cases[2]. Stinging by ants may be the most common cause of anaphylaxis in endemic areas. Therefore, it should be recognized as a matter of considerable public health concern, and more attention should be paid to this issue. Herein, we report a case of an inebriated male who suffered from numerous ant stings and required inpatient treatment for severe symptoms.

The patient’s family members informed us that five days previously, the patient went to a wedding ceremony and consumed a significant amount of alcohol; shortly afterwards, he fell asleep in a field near an anthill on the way home (Figure 1A). Two hours later, he was found by family members. He was taken to a local hospital for treatment because of unbearable skin pain. He was diagnosed with ant sting and was administered analgesics (ibuprofen sustained release capsules 0.4 g twice a day) and antipruritic (loratadine 10 mg/d) for 3 d. However, the patient developed severe symptoms with diffuse erythema, papules, and pustules. The pain worsened, and the itching became obvious. Fever (up to 40 °C), vomiting, and hematochezia were reported. An intramuscular injection of dexamethasone sodium phosphate (10 mg/d) was administered at the local hospital. After two days of treatment, his vomiting and hematochezia stopped. However, mania and soliloquy were observed, pustules in the cubital fossa and lower extremities broke up, and eroded surfaces were present. The patient was transferred to our hospital for further treatment.

Figure 1 The anthill and ants. A: A large anthill of imported fire ants are nesting on a green belt; B: Several soldier ants and worker ants are working.
History of past illness

The patient had a history of hypertension for more than 1 year, and his blood pressure was controlled in the normal range when he was taking a hypotensive drug.

There was no notable family medical history of cancer or allergic diseases. 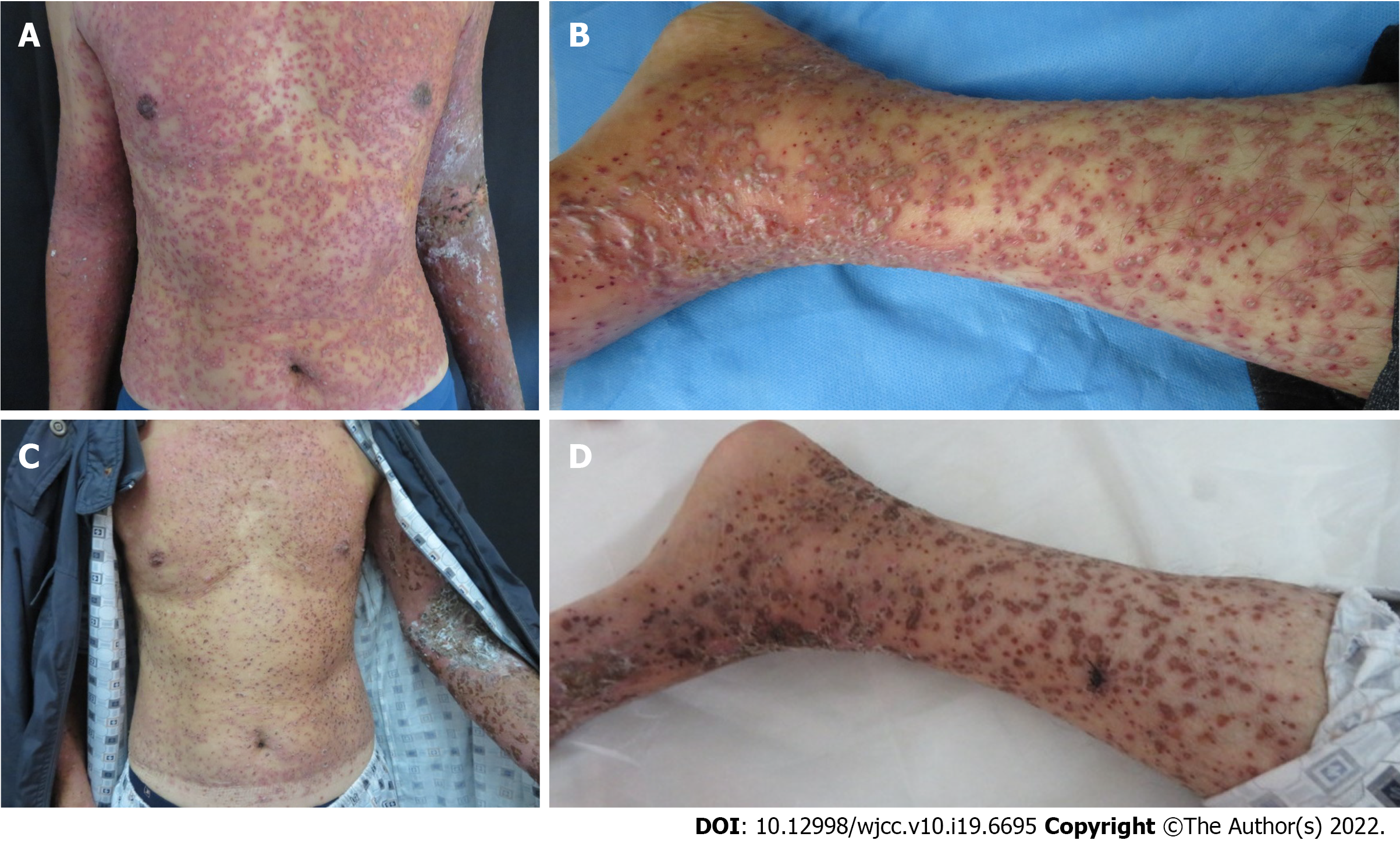 Figure 3 Pathological examination. A: A pustule was seen in stratum spinosum. B: The infiltration of eosinophils were seen in dermis (hematoxylin-eosin).
FINAL DIAGNOSIS

The patient was diagnosed with an ant venom allergy.

The management of this disease included short-term administration of methylprednisolone, antihistamines, diazepam, and supportive treatment (Table 1). During the treatment process, cold compresses were applied to the eroded surfaces and swelling areas.

After 12 d of treatment, most of the pustules became crusts, whereas some faded (Figures 2C and D). The patient had reduced symptoms and was discharged from the hospital. No symptoms of pain, itching, or psychological disturbances were reported during the follow-up visits within 6 mo.

Ants are familiar inhabitants of most terrestrial environments that belong to the order Hymenoptera[1]. Stinging by social Hymenoptera and food and drug exposure account for up to 43% of anaphylaxis cases and 20% of anaphylaxis-related fatalities[1]. Ants are one of the major causes of anaphylaxis, along with honeybees and vespids, all of which belong to the order Hymenoptera. However, most stinging ants are not aggressive. They have stinging apparatus for prey capture, social communication, and defense against predators[2]. Approximately 19 genera of ants have been found to be associated with venom allergy in humans, but only four genera, namely Solenopsis spp., Myrmecia spp., Pachycondyla spp., and Pogonomyrmex spp., have been reported to cause anaphylactic reactions and even fatalities[1]. Occasional cases, especially stings by imported fire ant, have been reported in Australia, Canada, Saudi Arabia, Spain, and Switzerland[3-7]. Although we are aware of the ability of some species to sting, knowledge of the prognosis of ant venom allergy remains limited because the risk of anaphylactic reactions depends on complex interactions between the likelihood of human contact, individual sensitivity, species aggressiveness, efficiency of venom delivery apparatus, and venom allergenicity[8]. Most accidents occurred in patients who came into contact with ant venom[9], which is similar to our case of the inebriated male. According to the information provided by the patient’s family members, a few days after the discharge of the patient, the anthill was finally located (as shown in Figure 1A), and it was determined that it was imported fire ants (as shown in Figure 1B) who stung the inebriated man. However, concerns have been raised about how this patient can recover from such a large number of ant stings, especially from the imported fire ant.

Knowledge of ant venom composition is a prerequisite for the diagnosis and treatment of ant venom allergy. The currently available information shows that ant venom includes various biologically active peptides and protein components, of which proteins and large peptides tend to cause allergic reactions[10]. Ant venom can cause immediate reactions occurring within 1-4 h and delayed reactions occurring after more than 4 h. Immediate reactions can be further divided into small local reactions (pain, swelling, erythema, heat, and sterile pustules at sting sites), large local reactions (a reaction larger than 10 cm in diameter persisting for longer than 24 h), generalized cutaneous reactions (pruritus and urticaria), and systemic reactions (anaphylaxis)[10]. Besides venom allergenicity, individual sensitivity, such as the level of allergen-specific IgE[11], may also play an important role in allergic reactions. However, a test for allergen-specific IgE was not performed because the patient refused to go for examination.

Numerous immediate-reaction sterile pustules were observed in this patient. Toxic reactions may play a role in pustule formation. We believe that allergic reactions also played a role in the formation of pustules, because infiltration of eosinophils close to the pustule could be seen (Figure 3B), and systemic anaphylaxis occurred in the days following the patient’s hospital stay. To determine whether the protein components of venom are crucial, however, better experimental conditions are required.

Accompanied by the development of pustules, systemic reactions such as mania, sleep disturbances, and transient fever were present. We did not consider alcohol withdrawal syndrome because the patient only occasionally drank alcohol. The main histopathological changes observed in ant venom allergy are eosinophil recruitment and T helper 2 (Th2) cytokine production[12]. Venom (allergens) injected into the body is endocytosed and processed by phagocytes. Subsequently, phagocytes migrate to the nearest draining lymph node and present the generated antigens coupled to a major histocompatibility complex class II molecule to naive T lymphocytes[13]. Activated naive T cells differentiate into distinct T helper subsets[12]. Once activated, Th2 lymphocytes undergo clonal expansion, leading to lymph node hyperplasia and interleukin-4 production[14]. A second exposure to venom antigens triggers both systemic and local reactions. Acute symptoms typically disappear within several hours. Delayed or biphasic anaphylactic reactions to insect stings have been reported[15], including fatalities[16]. However, cases of an inebriated person suffering from a large number of ant stings have rarely been reported. Even if ants are not aggressive and the efficiency of the venom delivery apparatus is low, the effects of a large amount of venom and allergenicity should not be underestimated.

The diagnosis of ant venom allergy is determined by the correlation of the clinical manifestation of sting reactions with specific IgE, as determined by skin and/or serological testing[10,17]. A direct or indirect detailed clinical history is crucial. Identifying the offending species is important for diagnosis and treatment; however, this may present considerable challenges[18]. The man was drunk and lost his memory at the time of the accident, which could have made the diagnosis difficult. Results for specific IgE were not obtained. However, given that a detailed clinical history was obtained from his family members (falling asleep near an anthill and confirmed sight of an ant sting), accurate diagnosis was not difficult.

The treatment of ant venom allergy which is as severe as our patient may be troublesome to junior doctors. It is similar to the treatment for other causes of anaphylaxis and depends on the manifestations of the reaction. Acute management of anaphylaxis includes the prompt use of epinephrine injections and, potentially, intravenous fluids or supplemental oxygen in the presence of hypotension or respiratory symptoms[19]. In many cases, glucocorticoids are used; however, their benefits and side effects require further evaluation. Cold compresses, antihistamines, and analgesics may be required to treat swelling, pruritus, and local pain[20]. Long-term management with venom immunotherapy is preferred when patients are at high risk of severe anaphylactic reactions[21].

Ant sting allergy is a significant public health concern, especially in endemic areas, and tends to be overlooked because the symptoms are usually mild and common. This patient’s inebriated state made the accident occur more easily and makes it difficult to diagnose ant venom allergy because of a lack of direct clinical history and complex clinical symptoms. The clinical management of ant venom allergies is similar to that of other Hymenoptera venom allergies. This case report highlights the importance of defending against the dangers of ant stings, and basic knowledge of ants, ant venom, and ant sting allergies should be enhanced.