Wellens syndrome is an electrocardiogram (ECG) pattern seen in high-risk patients with unstable angina pectoris. It is characterized by inverted or biphasic T-waves that change into positive or pseudo-normalized waves at precordial leads when the patient experiences an angina attack; however, the mechanism for this condition remains unclear.

A 47-year-old male patient experienced repeated, unprovoked episodes of chest pain for > 20 d, with worsening during the previous day. On the day of admission, he experienced episodes of paroxysmal chest pain lasting more than 30 min, in addition to radiating pain to the left arm and exertional dyspnea. The patient presented to the emergency department with no chest pain or other discomfort at that time. ECG at presentation showed sinus tachycardia and T-wave changes, which were identified as Wellens syndrome when combined with previous ECG findings. ECGs and myocardial enzymology examinations were normal when angina was present, but the ECG showed inverted or biphasic T-waves when angina was absent. After percutaneous coronary intervention, the ECGs demonstrated inverted or biphasic T-waves in the anterior precordial leads on days 0, 1, and 2, but normal T-waves on day 3. The ECGs showed no subsequent ischemic ST-T-wave changes.

Core Tip: Wellens syndrome, an electrocardiogram (ECG) pattern seen in high-risk patients with unstable angina pectoris, is characterized by inverted or biphasic T-waves that change into positive or pseudo-normalized waves at precordial leads when the patient experiences an angina attack. We report a case of Wellens syndrome in which we recorded the entire process of ECG evolution. We found that pseudo-normalized T-waves reflected the hyperacute T-waves of ST-segment elevation myocardial infarction (STEMI), which are higher and more symmetrical than normal postoperative T-waves. These pseudo-normalized T-waves may be a manifestation of unstable angina pectoris developing into the hyperacute phase of STEMI.

First described by de Zwaan et al[1] in 1982, Wellens syndrome is an important electrocardiogram (ECG) pattern, indicating severe stenosis in the left anterior descending (LAD) coronary artery. It is characterized by inverted or biphasic T-waves at precordial leads in angina-free periods, but shows positive or “normalized” T-waves during angina, which complicates the diagnosis. These positive or “normalized” T-waves are called pseudo-normalized T-waves[2] and might delay recognition of the emergency status of patients with chest pain. Here, we report a case of Wellens syndrome to deepen our understanding of these ECG signs.

A 47-year-old male patient was admitted with the chief complaint of repeated unprovoked chest pain for more than 20 da, which was aggravated for 1 d. After getting up early in the morning on the day of admission, he experienced paroxysmal chest pain again, which lasted for more than 30 min, in addition to radiating pain to the left arm and exertional dyspnea. At 18:30, the patient presented to the emergency department but had no chest pain or other discomfort at that time.

The patient had a history of smoking > 20 cigarettes per day for over 20 years, type 2 diabetes for 5 years, and gout for 2 years.

No remarkable personal and familial medical history was identified.

At admission, the patient’s temperature was 37.0 °C, pulse was 99 bpm, and blood pressure was 13.9/9.6 kPa. Cardiopulmonary and abdominal physical examinations showed no obvious abnormalities.

The ECG (Figure 1A and B) and myocardial enzymology examinations were normal when angina was present, while the ECG showed inverted or biphasic T-waves when angina was absent (Figure 1C). The ECG at presentation (Figure 1D) showed sinus tachycardia and T-wave changes, which were identified as Wellens syndrome when combined with previous ECG findings. Coronary angiography (CAG) showed localized stenosis of the proximal LAD (90%-95%; Figure 2), the D1 ostium (60%-70%), and the middle portion of the left circumflex artery. 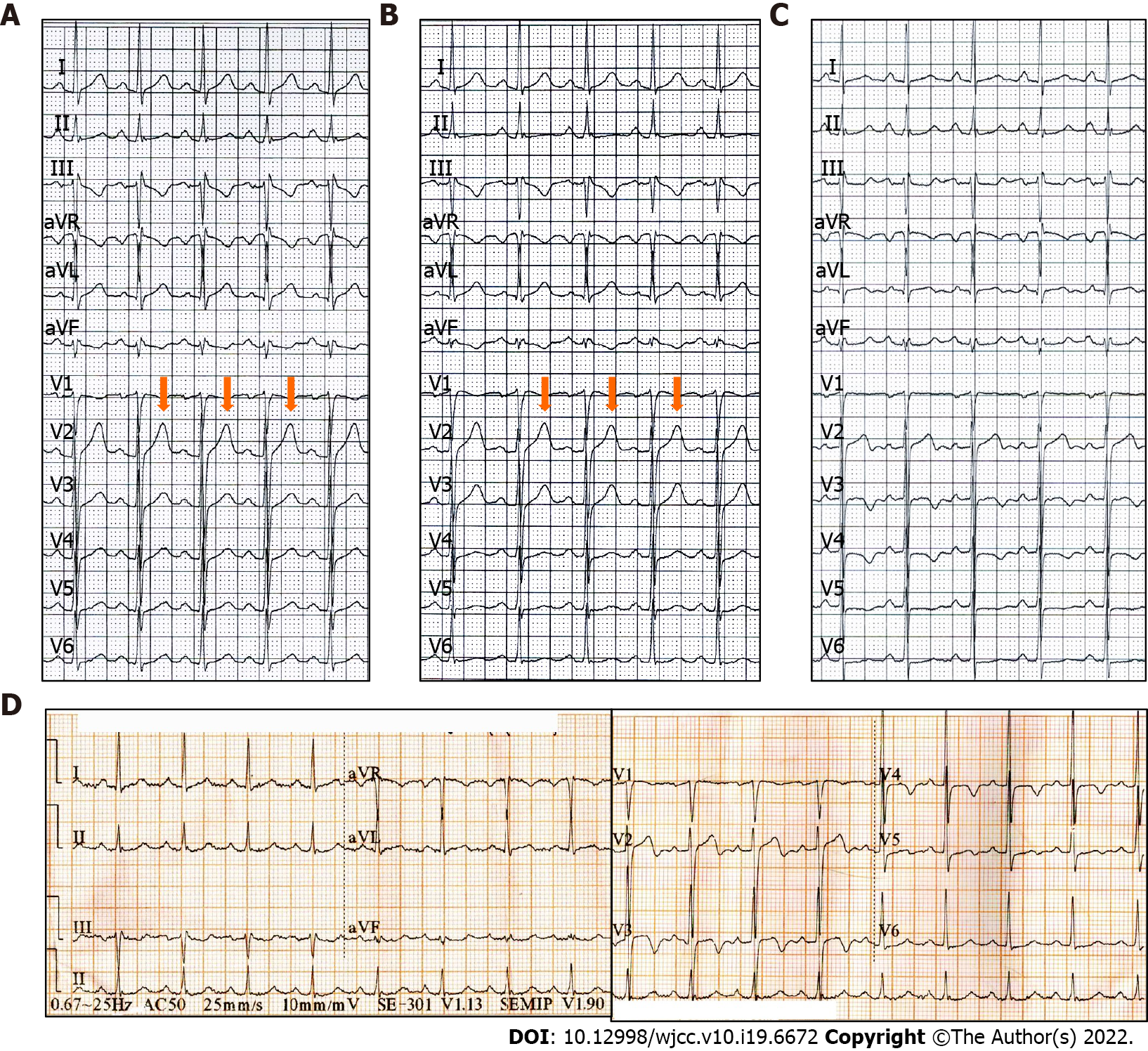 The patient’s chest pain fully resolved after the PCI. Postoperative ECGs demonstrated inverted or biphasic T-waves at the extensive anterior precordial leads on the day of PCI (Figure 3A), and 1 and 2 d after PCI (Figure 3B and C, respectively), but normal T-waves 3 d after PCI (Figure 3D). His ECGs recorded no subsequent ischemic ST-T-wave changes. Postoperative transthoracic echocardiography indicated a left ventricular ejection fraction of 69%. The patient’s ECG records at 1 (Figure 3E), 3, and 6 mo after hospital discharge were all normal, and he experienced no further chest pains during follow-up. 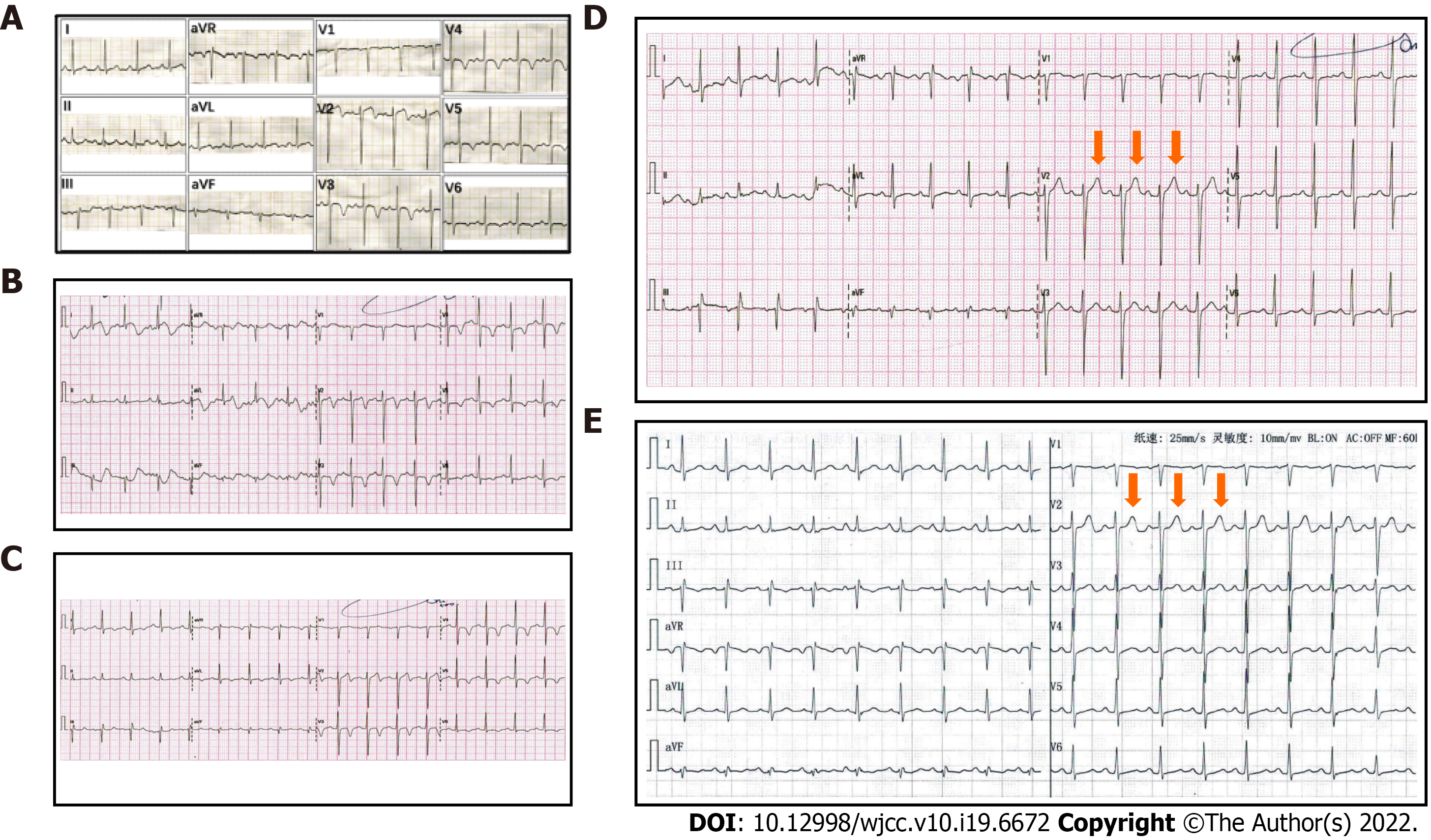 An increasing number of special ECG patterns are found to correlate highly with acute myocardial infarction (AMI), and these ECG patterns are even capable of predicting the exact site of the culprit lesions. For example, ST-segment elevation in lead aVR indicates an acute left main coronary artery occlusion[3] and leads V2 and aVL ST elevations indicate occlusion of the first diagonal artery[4]. Besides, de Winter pattern[5], Wellens syndrome, and Aslanger syndrome[6] among other ECG patterns, also draw the attention of clinic practitioners. However, due to the absence of classic ECG manifestations of AMI, identification of high-risk patients with these special ECG patterns is often delayed. In this paper, we report a case of Wellens syndrome to emphasize its value in the early identification of AMI.

Wellens syndrome, a specific ECG manifestation in high-risk patients with unstable angina pectoris, has an incidence of 0.1%[7] and a prevalence of 14%-18%[8] in patients with unstable angina pectoris. A history of angina, inverted or biphasic T-waves in the precordial ECG leads during the pain-free period, and little or no abnormality in cardiac biomarkers are key diagnostic indicators[9]. Another feature of Wellens syndrome is that in the presence of angina, the inverted or biphasic T-waves develop into positive T-waves[10], called pseudo-normalized T-waves[2] with an unknown mechanism. Additionally, Wellens syndrome is categorized into type A (biphasic) and type B (inverted) T-waves, which account for approximately 75% and 25% of the cases, respectively.

Previous studies have documented common etiologies of Wellens syndrome, including myocardial bridge[11], Tako-Tsubo cardiomyopathy[12], pulmonary embolus[13], and coronary spasm caused by drug abuse[14]. The pathophysiological mechanism underlying the characteristic T-wave changes in Wellens syndrome is debatable. Some studies have suggested that dynamic T-wave changes are caused by myocardial stunning or ventricular systolic dysfunction[15,16], whereas others have suggested that the pathophysiology is myocardial edema rather than myocardial dysfunction[17]. However, these studies have not clarified the mechanisms underlying the inverted or biphasic T-waves during the pain-free period, or the positive T-waves in the presence of angina.

The ECGs in our patient showed positive T-waves during angina, but inverted or biphasic T-waves when angina was relieved, thereby meeting the diagnostic criteria of Wellens syndrome. CAG showed a 90%-95% localized stenosis of the proximal LAD, which indicates that critical myocardial ischemia was present in this patient before he underwent PCI. Additionally, the patient’s angina resolved fully after PCI, and the T-waves normalized. These findings imply that the abnormal T-waves associated with Wellens syndrome resulted from severe fixed coronary stenosis, which could be repaired by PCI.

Regarding the evolution of the inverted or biphasic T-waves to positive T-waves during angina, we believe this was caused by the aggravation of myocardial ischemia. It is well known that flat, biphasic, or inverted T-waves are ECG manifestations of endocardial ischemia, whereas tall and symmetrical positive T-waves are features of transmural injury in the hyperacute phase of ST-segment elevation myocardial infarction (STEMI). For patients with Wellens syndrome, coronary stenosis, coronary spasm, unstable plaque rupture, or myocardial oxygen supply-demand imbalance, would aggravate myocardial ischemia and even cause acute epicardial injury, resulting in angina attacks and abnormal T-waves becoming positive or pseudo-normalized. We found that the T-waves on this patient’s ECGs during angina attacks, which were previously considered pseudo-normalized, were higher and more symmetrical than the normal T-waves on ECGs at 3 and 30 days after PCI. Since Wellens syndrome has the potential to develop into AMI, we propose that the pseudo-normalized T-waves of Wellens syndrome in the presence of angina probably reflect its deterioration into the hyperacute phase of STEMI.

One limitation of this study is that we did not obtain enough cases to quantify and compare the symmetry of the T-waves in patients with Wellens syndrome before and after PCI.

Our report demonstrates the ECG manifestations of Wellens syndrome before and after PCI, and during long-term postoperative follow-up, which were not considered in previous studies. The follow-up ECGs indicate that PCI can resolve the abnormal T-waves of Wellens syndrome. The abnormal T-waves during the pain-free period of Wellens syndrome likely result from endocardial ischemia based on significant coronary stenosis, while the pseudo-normalized T-waves reflect epicardial ischemia caused by stenosis aggravation. Without timely and effective treatment, pseudo-normalized T-waves are likely to develop into ST-segment elevation. Further studies are required to quantify and compare the symmetry of the T-waves in a larger number of patients with Wellens syndrome before and after PCI.

The author would like to express their gratitude to Dr. Yang LL and Dr. Yu X for their help on the revise of this paper.