A 32-year-old male presented to our hospital with hematochezia that had lasted for 6 h, with approximately 600-800 mL bloody stools and loss of consciousness for a few seconds. Persistent bleeding from the orifice of the appendix was observed by colonoscopy. Following the new diagnosis of appendiceal bleeding, the patient was treated by an emergency laparoscopic appendectomy. Finally, the patient was pathologically diagnosed with appendiceal Dieulafoy’s lesion. The patient was uneventfully discharged, and follow-up 2 wk later showed no evidence of rebleeding.

Although appendiceal bleeding is a rare cause of acute lower gastrointestinal bleeding, clinicians should consider it during differential diagnosis.

The common causes of lower gastrointestinal bleeding are mostly known to be diseases of the colon, rectum, and terminal ileum[1]. However, appendiceal bleeding as the origin is extremely rare. Diverticulum, angiodysplasia, inflammation, and neoplasm are the usual etiologies for appendiceal bleeding[2,3]. Vascular diseases, such as angiodysplasia and Dieulafoy’s lesion, are one of the most common causes of massive bleeding and sometimes can be life-threatening[1,4]. We report herein a case of lower gastrointestinal bleeding due to appendiceal Dieulafoy’s lesion, with a literature review.

A 32-year-old male presented to the emergency department of our hospital with hematochezia that had lasted for 6 h.

The patient had been previously diagnosed with hemorrhoids and hypertension, but was taking no medications.

The personal and family history-taking revealed no information relevant to the current case.

The patient’s temperature was 36.5 °C, heart rate was 95 beats per minute, respiratory rate was 20 breaths per minute, blood pressure (measured with electronic cuff) was 147/105 mmHg, and oxygen saturation in room air was 99%. The physical examination showed an anemic appearance, without any other pathological signs.

The laboratory tests showed that hemoglobin was 102 g/L (normal range: 130-175 g/L), revealing a mild anemia. Other routine relevant examinations, such as platelet counts and for markers of coagulation function, and liver and renal function, yielded normal findings. Unfortunately, the patient passed bloody stools again 1 d after conservative treatment in our department, with his hemoglobin level dropping to 86 g/L.

An emergency colonoscopy was performed, and extended up to the terminal ileum. During the procedure, blood clots in the cecum were first washed out and we were then able to observe a large quantity of fresh blood oozing out of the appendiceal orifice (Figure 1A). In addition, contrast-enhanced abdominal computed tomography (CT) scan showed a high-density area in the appendix without any signs of acute appendicitis, tumor, or diverticulum (Figure 1B). 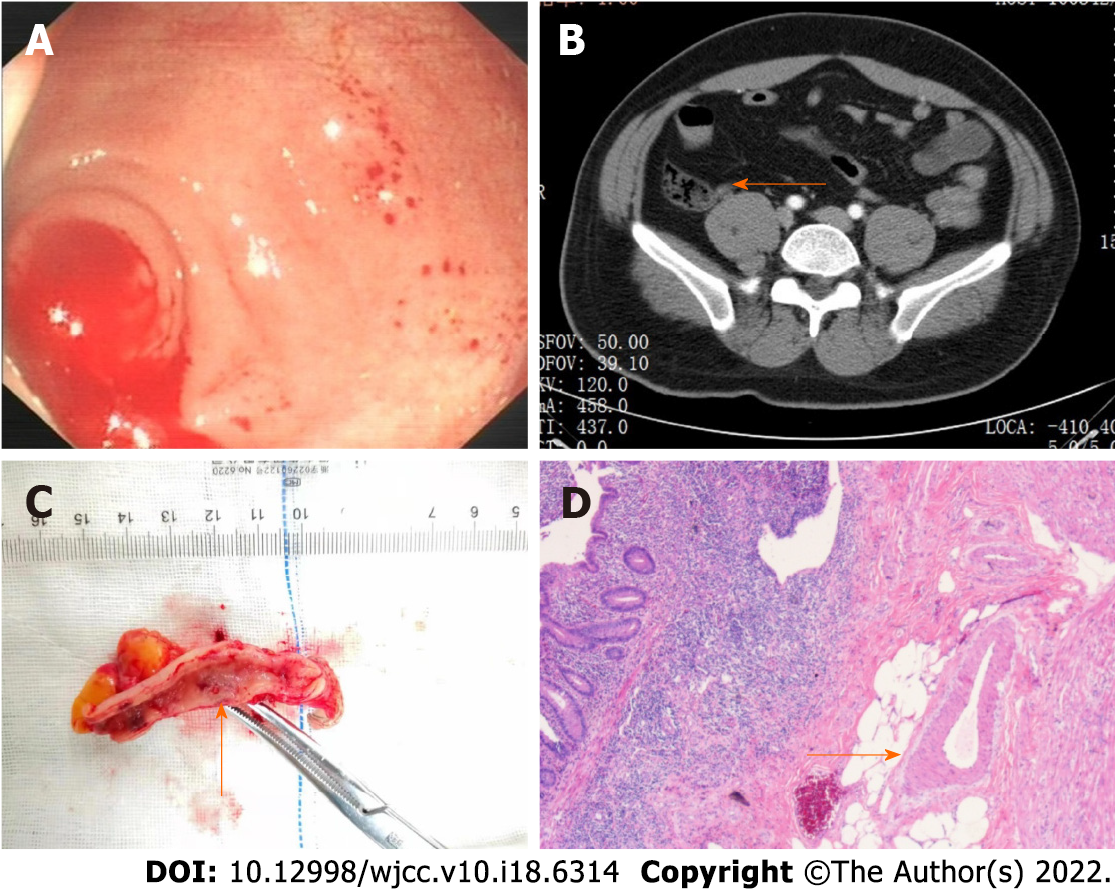 Figure 1 Appendiceal bleeding caused by Dieulafoy’s lesion. A: Colonoscopy showed active bleeding from the appendiceal orifice after blood clots were flushed out of the ileocecal junction; B: Enhanced abdominal computed tomography showed a high-density area in the appendix, revealing the possibility of appendiceal bleeding (arrow); C: Macroscopic pathological observation showed a vessel stump on the mucosa of the appendix (arrow); D: Microscopic pathological examination showed a caliber-persistent artery in the submucosa of the appendix (arrow).
FINAL DIAGNOSIS

Bleeding of the appendix.

We suspected that the source of bleeding was the appendix, which prompted an emergency laparoscopic appendectomy. During that surgery, no signs of acute appendicitis or diverticulitis were observed; however, a large amount of blood clots was observed through the longitudinal incision of the appendix. A vessel stump was also found on the mucosa of the appendix (Figure 1C). Pathologically, a caliber-persistent artery was detected near the vessel stump of the mucosa surface, corresponding to Dieulafoy’s lesion within the appendix (Figure 1D).

The patient had no recurrent hematochezia or melena, and was discharged from the hospital 6 d after the surgery. Follow-up 2 wk later showed no evidence of rebleeding.

Several modalities, such as colonoscopy, contrast-enhanced abdominal CT, and angiography, can be applied in diagnosing appendiceal bleeding[2,3,9]. In our case, colonoscopy directly revealed the active bleeding from the appendiceal orifice. For such cases, emergency colonoscopy for acute lower gastrointestinal bleeding should be utilized, at least to the terminal ileum. In addition, the orifice of the appendix should be carefully observed. Contrast-enhanced abdominal CT is useful in evaluating diverticulum, neoplasm, or acute inflammation. Although mesenteric artery angiography requires bleeding of more than 0.5 mL/min, vessel embolization is feasible in controlling acute bleeding[9].