An 11.7-year-old boy presented with headache, vomiting, and altered consciousness. The patient was diagnosed with late-onset OTCD. After nitrogen scavenging treatment and a protein-free diet, ammonia levels were reduced to normal on the third day of admission. Nevertheless, the patient remained in a moderate coma. After discussion, LT was performed. Following LT, the patient’s blood ammonia and biochemical indicators stabilized in the normal range, he regained consciousness, and his nervous system function significantly recovered. Two months after LT, blood amino acids and urine organic acids were normal, and brain magnetic resonance imaging showed a decrease in subcortical lesions.

Ornithine transcarbamylase deficiency (OTCD) is the most common urea cycle disorder, with an incidence of approximately 1/56500 to 1/80000 reported in the literature[1-4]. The 2019 Urea Cycle Disorders Diagnosis and Management guidelines recommend liver transplantation (LT) for patients with severe urea cycle disorders who do not have severe neurological impairment and have stable metabolic status[5]. Opinions regarding LT for children with pre-existing severe brain damage differ as LT does not restore pre-existing neurological damage and due to the high risk of LT in children with acute encephalopathy; there is no experience regarding the extent to which neurological damage can be restored after surgery[5]. We report a patient with late-onset OTCD with good neurological recovery after LT.

An 11.7-year-old boy was admitted to our hospital due to headache, vomiting and altered mental status.

Two days before admission, the patient complained of a headache without obvious inducement, accompanied by vomiting 25 times. The headache did not improve with cold medication. He became unconscious 12 h before admission, and relevant tests were completed at a referring hospital. His blood ammonia was > 500 µmol/L. He was referred to our hospital for further treatment.

The patient was the product of a first pregnancy and first birth (G1P1) mother, and delivered by cesarean section at term with a birth weight of 3.0 kg. His perinatal condition was unremarkable, with no history of asphyxia. He was generally healthy and developed normally for a child of the same age. Prior to this episode, the family was not aware that the patient had OTCD.

The patient had no significant family history. No patients in the family had OTCD or symptoms associated with the disease.

On physical examination, he was in a moderate comatose state [Glasgow coma score (GSC) 6] and was unresponsive to sound. His eyes could not be closed, the pupils were equally large and round, about 3 mm in diameter, and light reflex was delayed. There were no significant abnormalities on cardiopulmonary or abdominal examinations. Muscle strength in the limbs could not be tested, muscle tone was normal, and all pathological signs were negative. 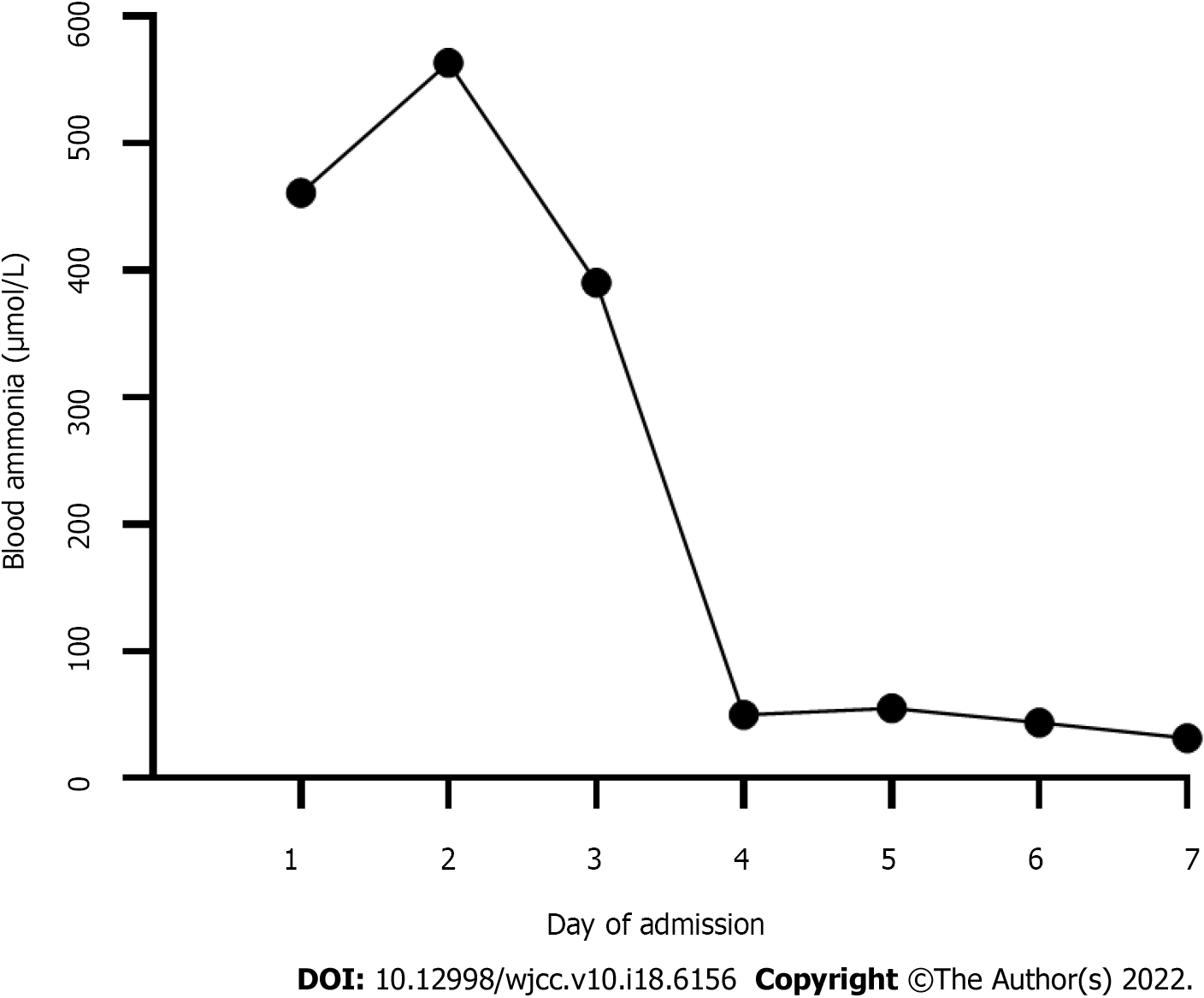 Figure 1 Blood ammonia changes during the first week of admission.

Whole exome gene testing revealed the OTC gene exon2 hemizygote variant c.119G > A (p.R40H), inherited from his mother. The missense mutation was located in the well-studied exon functional domain without benign variation [Pathogenic moderate (PM) 1]. The frequencies of all normal population databases (dsSNP, 1000 genomes) were less than 0.0005 (PM2). This is a variant with different amino acid changes at the same locus reported in the literature as pathogenic variants (PM5). Pathogenic missense mutations of this gene are common, and benign missense mutations are rare [Pathogenic supporting (PP) 2]. The literature reported that variant to caused impaired gene function as show by in vitro functional assays [Pathogenic strong (PS) 3]. In summary, according to American College of Medical Genetics (ACMG)guidelines, this variant is likely pathogenic (PM1 + PM2 + PM5 + PP2 + PS3).

On day 3, blood ammonia decreased to normal and was maintained in the normal range for the remainder of the hospital stay. The continuous hemodiafiltration parameters (blood flow velocity 120 mL /min, replacement velocity 500 mL/h, dialysis velocity 2500 mL/h) were gradually adjusted downwards. On day 6, the patient discontinued hemodiafiltration. On day 7, the patient’s consciousness changed from deep coma to moderate coma. On day 12, the patient was weaned from the ventilator; however, he remained in a moderate coma.

On day 31, modified piggyback orthotopic LT (anastomosis of the donor inferior vena cava to the recipient inferior vena cava) was performed, the donor was deceased. Postoperatively, the patient was treated with tacrolimus, sodium mescaline, and methylprednisolone. On day 35 (day 4 after surgery), the patient was conscious (opened eyes autonomously, obeyed commands, verbal response was “T”). A repeat brain MRI more than 2 mo after transplantation showed that the previous subcortical lesions had largely disappeared; however, hydrocephalus was worse (Figure 2). He was discharged after 3 mo and underwent abdominal ventricular drainage at another hospital. 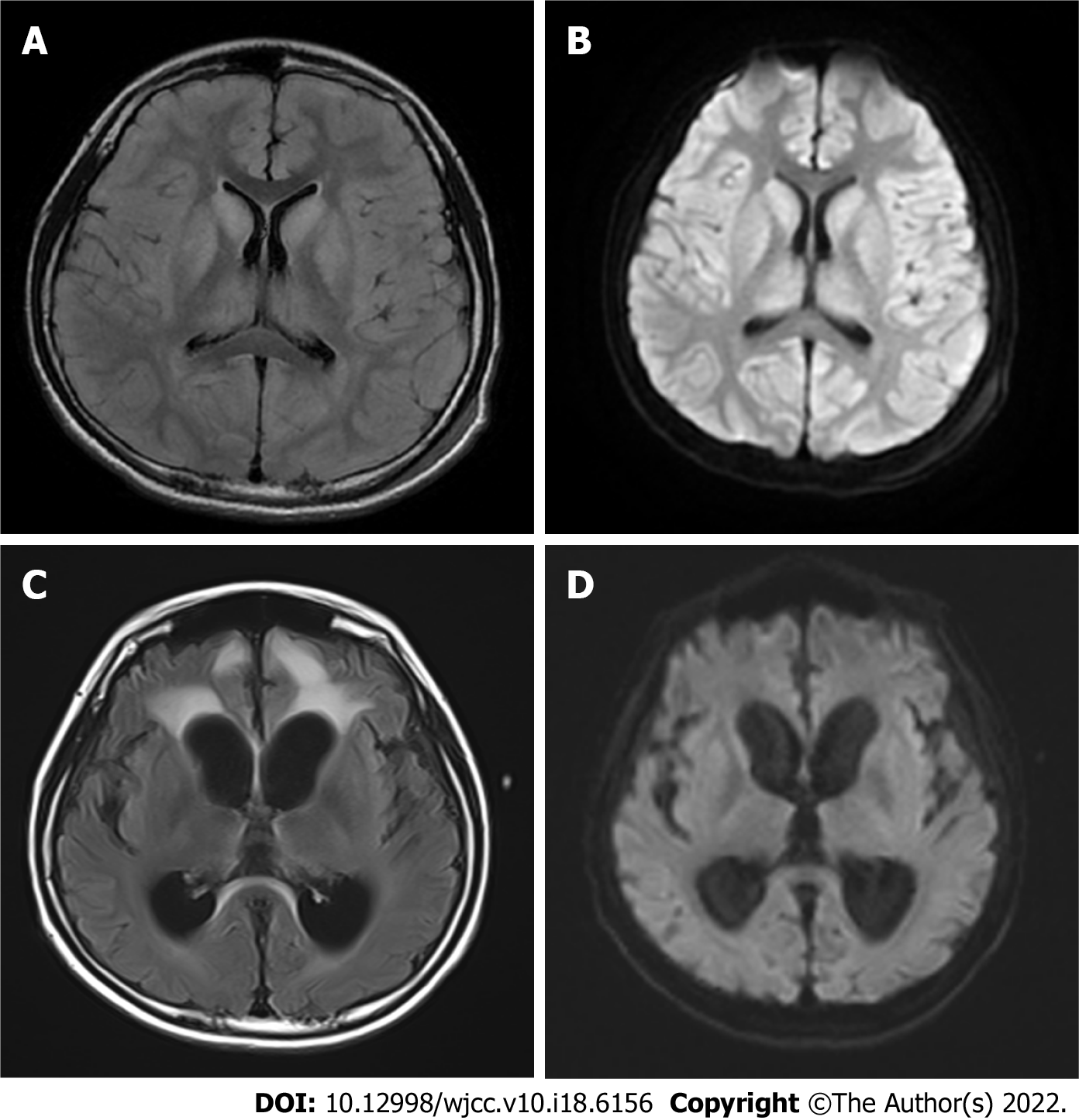 At follow-up, 6 mo after surgery, he could sit, squat, and walk smoothly on his own. He could say simple superlatives, and his command execution rate was approximately 30%. He showed poor emotional control and a greater temper to his parents; however, he was gentler to strangers and his brother.

OTCD can develop at any age. Depending on the time of onset, OTCD can be divided into the neonatal-onset type and the late-onset type (age of onset > 28 d)[6]. Patients with neonatal onset usually present in the first few hours and days after birth with severe disease and high mortality. The clinical presentation of late-onset disease varies widely, with no specific clinical manifestations before initial onset. Acute onset of late-onset OTCD can be induced by infection, prolonged fasting, or fatigue. The outcome for conservative treatment is poor in patients with hyperammonemia crisis, and 5-year survival is approximately 45%[7].

Outcomes in urea cycle disorders are related to blood ammonia levels and the duration of the coma. According to a European questionnaire, patients with blood ammonia levels > 300 μmol/L or peak blood ammonia levels > 480 μmol/L during the first episode suffered neurological dysfunction[8]. Although patients with late-onset OTCD generally have better outcomes than those with neonatal onset, there is a higher incidence of residual neurological damage, and the mortality rate for late-onset OTCD with coma on the first episode is high. In a follow-up study that included 90 OTCD cases, 18 patients had coma as their first presentation and 6 of them died[9]. Among 16 genetically confirmed cases of late-onset OTCD reported in the Chinese literature[10], nine died shortly after hospital admission, suggesting the disease’s aggressive nature at acute onset. In our case, the patient was physically fit and had normal development before the presentation. Headache and vomiting were the primary manifestations; these symptoms were not taken seriously until the onset of unconsciousness, which delayed the treatment. Although blood ammonia levels reduced to the normal range after aggressive treatment, neurological damage did not improve with the normalization of blood ammonia. The patient was in a moderate coma before LT.

OTCD is treated with a low-protein diet and long-term oral ammonia-lowering medications. LT is the radical treatment for OTCD. After LT, patients no longer need to restrict their diet or take nitrogen scavenging agents[5]. Statistics on LT in patients with urea circulation disorders show that the 5-year survival rate of patients after LT can exceed 90%[11,12]. There is no consensus regarding the indications or timing of LT. It is now believed that LT should be performed in all patients with neonatal onset to prevent neurological damage[13]. The indications and timing of LT for late-onset OTCD must be determined by the clinical symptoms, including poor drug efficacy, recurrent episodes of hyperammonemia, growth retardation, and inability to strictly control the diet[14]. Although post-transplant patients require long-term immunosuppressive drugs, there is evidence that OTCD patients who underwent LT have a better quality of life than those who did not and no longer risked death due to sudden-onset hyperammonemia[11,15].

The present patient had an acute onset, a long duration of hyperammonemia, severe brain damage, and was in a moderate coma before LT. Therefore, the optimal time window for LT was missed, and the choice of LT and the extent to which the patient would recover from neurological damage after transplantation were a concern for his physicians and parents. Most LTs for OTCD patients are carried out in the context of stable metabolism, and there are few reports of LT in patients with severe neurological injury. Nevertheless, given the patient’s inability to regain consciousness, we performed LT, and he was conscious 4 d later. After LT, he did not take nitrogen scavenging agents, and blood ammonia, liver, and kidney function biochemistry were maintained in the normal range at regular follow-up. Kawagishi et al[16] reported a patient who underwent LT for recurrent hyperammonemia due to late-onset OTCD, and blood ammonia was maintained in the normal range without further nitrogen scavenging agents after surgery. Nevertheless, at 16 mo after surgery showed no change in subcortical lesions. Brain MRI in our patient was repeated about 2 mo after surgery, and suggested a significant reduction in abnormal cranial signals compared with the previous MRI, indicating that LT was effective in the treatment of this patient, However, brain MRI showed that hydrocephalus had progressed and brain atrophy was present, suggesting that some neurological damage may not be reversed after LT.

Several studies have shown that LT could be used as a radical treatment which significantly improves the quality of life[11,17]. However, it is not clear whether LT is beneficial for OTCD patients who already have severe neurological damage. This case report suggests that LT can be attempted in children with late-onset OTCD, even if severe neurological impairment is already present. Neurological recovery after LT in this patient was unexpected; the recovery of higher functions such as emotional control and spatial thinking require long-term rehabilitation training and psychotherapy, and its effects need to be observed during follow-up.

In summary, patients with late-onset OTCD and acute hyperammonemic encephalopathy are at high risk, and LT can significantly improve the neurological damage caused by this disease. As a radical cure for OTCD, LT should be considered more aggressively.