Human epidermal receptor-2 (HER-2) expression has been reported to be discordant between primary tumor and metastatic tissue.

We presented a case diagnosed with the HER-2+ breast cancer patient who exhibited changes in the expression of HER-2 receptors on tumour samples from surgical specimens obtained after neoadjuvant treatment (NAT) compared with initial biopsy. The patient underwent a HER-2-targeted therapy consequently, in spite of HER+ gene loss. After the surgery, the patient subsequently underwent endocrine therapy and radiotherapy.

Changes in HER-2 expression after NAT should be retested by physicians and pathologists before systemic treatment instead of avoiding further HER-2-targeted therapy, and we will perform immunohistochemical multiple-spot biopsy analyses of other important clinical issues to better define prognosis and tailor subsequent adjuvant therapy.

Core Tip: We presented a case diagnosed with the human epidermal receptor(HER)-2+ breast cancer patient who exhibited changes in the expression of HER-2 receptors on tumour samples from surgical specimens obtained after neoadjuvant treatment (NAT) compared with initial biopsy. Changes in HER-2 expression after NAT should be retested by physicians and pathologists before systemic treatment instead of avoiding further HER-2-targeted therapy. In general, the exact mechanisms of HER-2 discordance remain unknown and further investigations are needed.

The Human epidermal receptor-2 (HER-2) gene is over-expressed in approximately 15%-20% of primary breast cancers, and HER-2-targeted therapies are associated with significantly improved survival. Neoadjuvant treatment (NAT) is the standard of care for HER-2–positive early breast cancer, especially for positive pathologic axillary lymph nodes. However, HER-2 expression has been reported to be discordant between the primary tumour and the remaining tumour after NAT and is associated with poor prognosis and treatment. Data regarding HER-2 Loss suggest that 2.3%-43% of post-treatment tumours lose HER-2 positivity, which is associated with worse survival[1-3]. Herein, by reviewing the relevant literature, we present a case of HER-2 Loss with HER-2+ breast cancer undergoing NAT, to determine the prognostic impact of HER-2 Loss and improve disease management.

She complained of a mass in her left breast for several months.

A 55-year-old postmenopausal female patient presented to the Xi Jing Hospital of Air Force Medical University in September 2019. She complained of a mass in her left breast for several months.

The patient was healthy with no previous comorbidity.

Her family history of cancer was negative.

She found two irregular nodules in the upper external quadrant of the left breast.

All tumuor markers, including serum carcinoembryonic antigen, neuron-specific enolase, and alpha fetoprotein, were within normal ranges. Histopathology revealed invasive breast carcinoma and infiltrating ductal carcinoma in the axillary lymph nodes. Immunohistochemical (IHC) staining was positive for ER, progesterone receptor, Ki-67 30% and suspicious positive for HER-2. Because of the suspicious positivity for HER-2, the fluorescence in situ hybridization (FISH) method was strongly recommended. FISH testing was positive, as shown in Figure 1. Breast cancer and metastatic lymph nodes were identical in FISH expression. The physical and imaging examinations showed no primary lesions in either breast or in other organs. 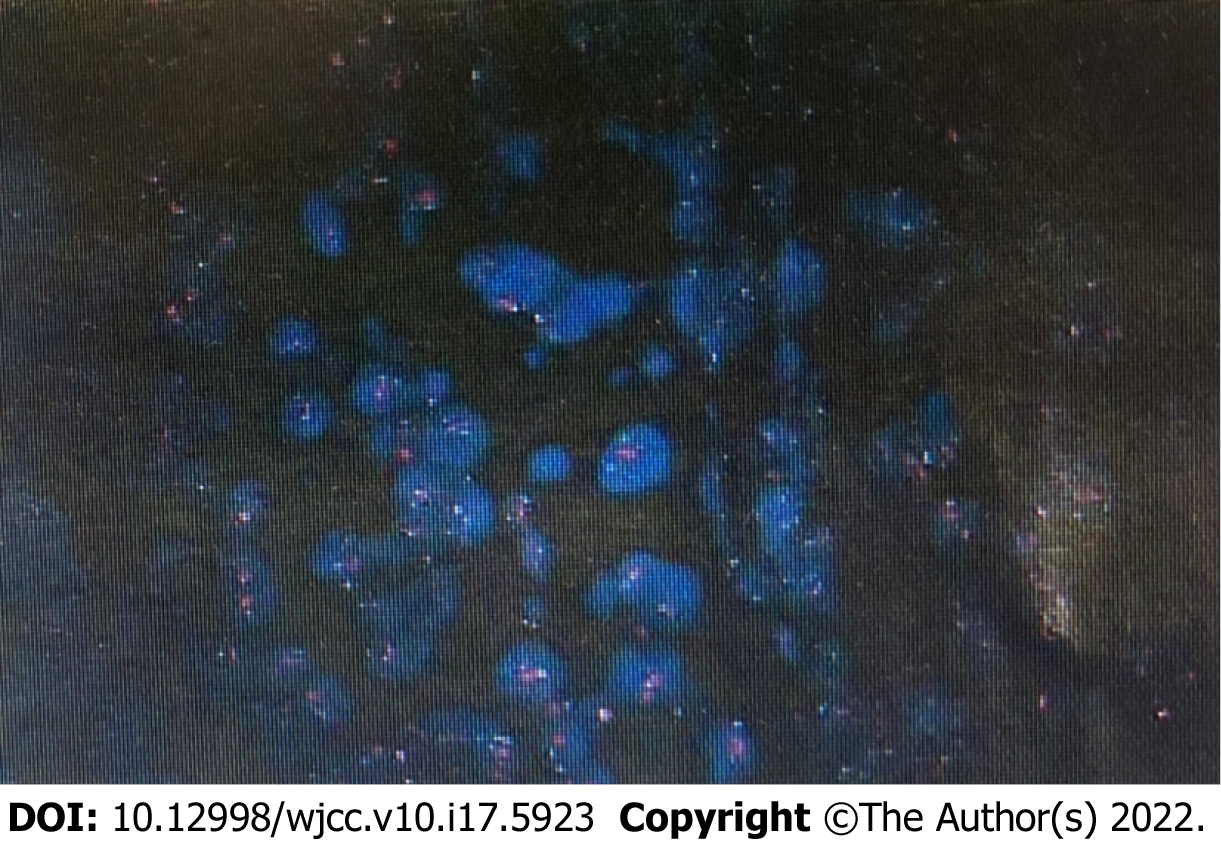 The patient was diagnosed with the HER-2+ early breast cancer.

The multidisciplinary board of the Breast Centre recommended “neoadjuvant” chemotherapy: T(HP)-EC scheme: 4 cycles of docetaxel 90 mg/m2, trastuzumab, and pertuzumab, followed by 4 cycles of epirubicin 90 mg/m2 and cyclophosphamide 600 mg/m2, every 3 wk for 8 cycles) before total mastectomy and axillary lymph node dissection. Histopathologic analysis of these specimens showed residual ductal carcinoma disease. Histopathology revealed grade 3 invasive breast carcinoma, (RCB-II, 6 scores). Microscopically, the residual invasive breast cancer was approximately 7 mm, and 5 out of 20 dissected axillary lymph nodes showed metastasis. With all of this, the tumour was classified as ypT1bN2aM0. Immunohistochemistry was performed, and the results were as follows: 90% positivity for estrogen receptors with high intensity, 90% positivity for progesterone receptors with high intensity, and suspicious positivity for HER-2 (++). FISH testing was negative, as shown in Figure 2. We retrospectively reevaluated these results from the central laboratory FISH screening. On May 8, 2020, the patient received T-DM1 at a dose of 3.6 mg per kilogram of body weight intravenously every 3 wk for 14 cycles. Simultaneously, adjuvant radiotherapy was also recommended because of her axillary lymph node features on excisional biopsy. At the follow-up, 1 year after diagnosis and treatment initiation, the patient had no sign of local or distant recurrence. Considering the hormone sensitivity of the tumour, the guidelines decided for endocrine adjuvant therapy were as follows: (abemaciclib 150 mg twice daily + anastrozole 1mg once daily). 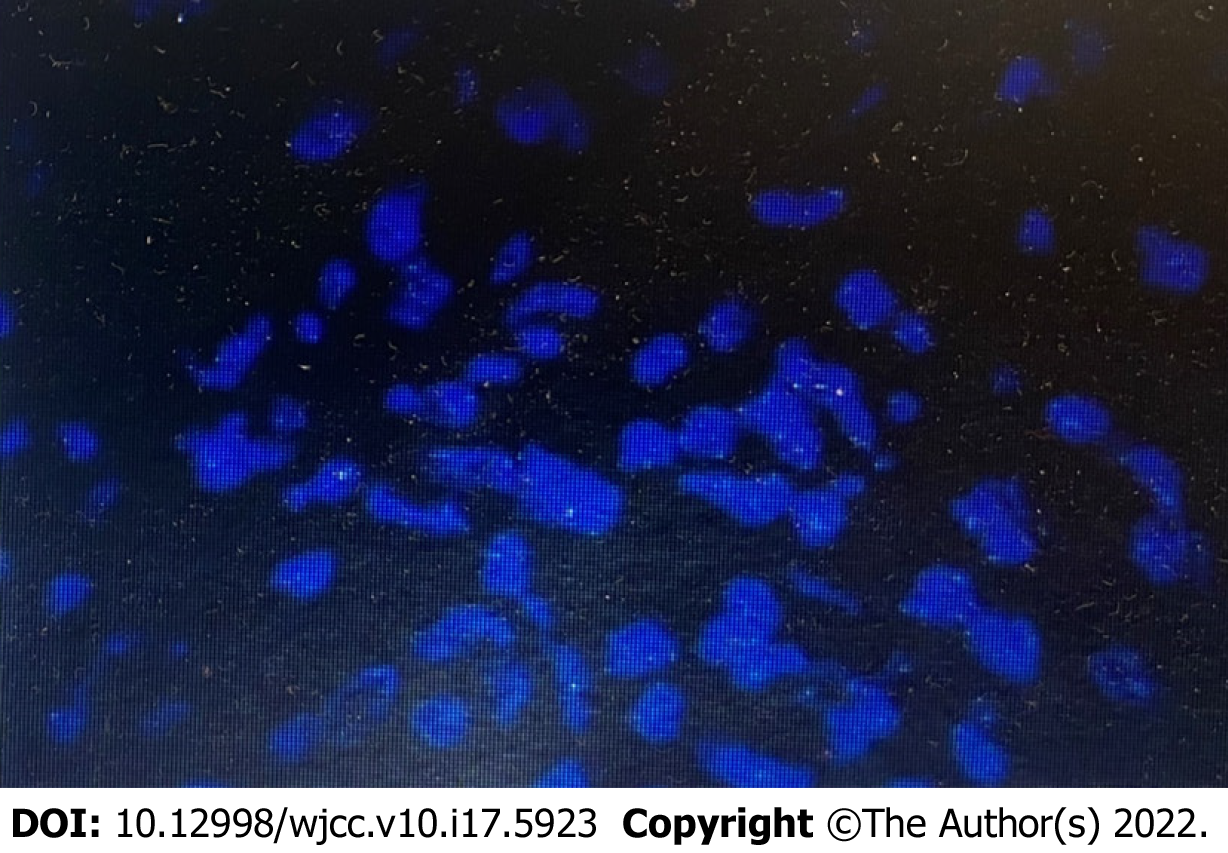 Figure 2  The fluorescence in situ hybridization results after neoadjuvant treatment.
OUTCOME AND FOLLOW-UP

At the time of drafting the present report (January 2022), routine follow-up of the patient continued, showing no complications.

The current standard presurgical systemic treatment in HER-2-positive breast cancer patients is NAT, especially for positive pathologic axillary lymph nodes. The addition of anti-HER-2 treatment to neoadjuvant chemotherapy significantly improves the pathological complete response (pCR) rate, which is a surrogate for disease-free survival (DFS), overall survival and distant recurrence–free survival (DRFS)[4]. Mittendorf et al[5] found that according to FISH analysis, approximately one-third of their patients with sufficient residual disease to warrant repeat HER-2 testing had lost HER-2 gene amplification. Furthermore, patients who lose HER-2 gene amplification have significantly lower relapse-free survival than those whose tumours retain HER-2 gene amplification[6]. Notably, we found that this case exhibited changes in the expression of HER-2 receptors on tumour samples from surgical specimens obtained after NAT compared with initial biopsy. This is in agreement with early studies in which the rate of HER-2 gain and loss was observed to be 6.5% and 14.2%, respectively, and loss of HER-2 expression was more commonly observed than gain of HER-2 expression[3,7].

In the neoadjuvant setting, the addition of trastuzumab and, more recently, pertuzumab to chemotherapy significantly improves the pCR rate compared to chemotherapy alone[8]. The KATHERINE study showed that among patients with HER-2-positive early breast cancer who had residual invasive disease after completion of neoadjuvant therapy, the risk of recurrence of invasive breast cancer or death was 50% lower with adjuvant trastuzumab emtansine (T-DM1) than with trastuzumab alone. Further subgroup analyses showed that 8.3% of posttreatment tumours lost HER-2 positivity after NAT (n = 70); invasive-disease events occurred in 11 patients in the adjuvant trastuzumab group; and no events occurred in the T-DM1 group, reminding us that adjuvant T-DM1 remains beneficial in tumour loss in the HER-2 population[9]. This case was HR+, HER-2+ breast cancer. The ExteNET trial demonstrated that neratinib given for 1 year following trastuzumab-based therapy significantly improved invasive DFS (iDFS) in patients with HER-2+ breast cancer, with the greatest efficacy seen in patients who initiated treatment within 1 year of prior trastuzumab therapy and in those with HR+ disease[10]. Meanwhile, the most recently results showed that neratinib achieved an 11.9% iDFS benefit for the HR+ subgroup within 1 year of prior trastuzumab therapy in the 5-year analysis. In comparison with the previously reported KATHERINE trial, the iDFS benefit was 11.3% at the 3-year analysis in patients with T-DM1. However, patients in the KATHERINE trial had a substantially worse baseline prognosis than those enrolled in the ExteNET trial. The KATHERINE trial focused on higher-risk patients with residual invasive breast cancer after completion of neoadjuvant chemotherapy administered with trastuzumab-containing therapy. We considered that the patient could benefit from T-DM1 rather than neratinib, owing to adverse events, group characteristics and accessibility. Subsequently, the MonarchE study showed that there was a 25% reduction in the risk of developing an iDFS event in the abemaciclib plus endocrine therapy (ET) group relative to ET alone, as well as a 3.5% absolute improvement in 2-year IDFS rates (92.2% vs 88.7%).The addition of abemaciclib to ET also resulted in an improvement in DRFS (distant relapse-free survival) compared with ET alone, with 2-year DRFS rates of 93.6% in the abemaciclib arm and 90.3% in the control arm[11,12].

In general, the exact mechanisms of HER-2 discordance remain unknown and further investigations are needed. The interval between the last HER-2-targeted treatment, the time of surgical excision of the tumour after NAT, and biopsy of the metachronous metastasis or intratumoural heterogeneity of the HER-2 gene were associated with a significant change in HER-2 expression. Nevertheless, FISH testing is associated with less discordance than the IHC method[1,13]. Despite observations revealing HER-2 Loss between initial biopsy and surgical specimens, management of patients with HER-2+ breast cancer is frequently based on primary tumor characteristics. Furthermore, Several studies suggested that all subgroups of women seem to benefit from trastuzumab in exploratory subgroup analysis, regardless of changes in HER status[13-16]. In our opinion, changes in HER-2 expression after NAT should be retested by physicians and pathologists before systemic treatment instead of avoiding further HER-2-targeted therapy. Furthermore, if the HER-2 status changes between the primary tumour and the remaining tumour undergoing NAT, the actual guidelines recommend the use of HER-2 status in metastatic tissue, and the FISH method is strongly recommended. In this way, changes in HER-2 expression influenced by HER-2 internalization and degradation may be avoided. Finally, we will perform IHC multiple-spot biopsy analyses of other important clinical issues to better define prognosis and tailor subsequent adjuvant therapy.

In conclusion, our study presented a case of HER+ gene loss in a patient with the HER-2+ breast cancer after NAT and we went on to do a literature review of this phenomenon which has been shown in about 10% of patient in case series. Although HER-2 Loss after NAT is considered extremely rare, repeating HER-2 test or IHC multiple-spot biopsy analyses is required for accurate prognosis and therapy.