Various tumors and tumor-like disorders, originating from the neural sheath, as well as other types, may affect the brachial plexus region. Due to the infrequent presentation, brachial plexus palsy caused by spontaneous hematoma in patients with hemophilia might miss the treatment by early surgical decompression and progress to permanent nerve damage.

The case reported here was a 30-year-old man with hemophilia, as well as both sensory and motor dysfunction of the left upper extremity. A presumptive diagnosis of brachial plexus tumor was initially made, which was subsequently confirmed to be an organized chronic hematoma rather than a neoplasm. The hemophilia-induced expanding hematoma compressing the brachial plexus was considered to be the main reason for the patient’s complaints. The clinical symptoms were alleviated and the involved nerves partially recovered at a follow-up of 1 year.

Early surgical intervention is crucial and it seems to be an essential precondition for recovery of nerve function in brachial plexus lesions.

Core Tip: Due to the infrequent presentation, brachial plexus palsy caused by spontaneous hematoma in patients with hemophilia might miss the treatment by early surgical decompression and progress to permanent nerve damage. We presented our experience with successful surgical management of a brachial plexus tumor-like disorder, which was eventually proved to be an extrinsic muscular hematoma in the vicinity of the plexus. Early surgical intervention is crucial and it seems to be an essential precondition for recovery of nerve function.

Various tumors and tumor-like disorders, originating from the neural sheath, as well as other types, may affect the brachial plexus region[1,2]. In cases of brachial plexus lesions, no imaging or radiographic test that is currently available, such as angiography, computed tomography (CT), or magnetic resonance imaging (MRI), is able to reliably distinguish between benign and malignant neurogenic tumors[3]. Use of nonspecific symptoms and imaging findings for preoperative diagnosis probably leads to error.

The case reported here was a 30-year-old man with hemophilia, as well as both sensory and motor dysfunction of the left upper extremity. A presumptive diagnosis of brachial plexus tumor was initially made, which was subsequently confirmed to be an organized chronic hematoma rather than a neoplasm. Due to the infrequent presentation, brachial plexus palsy caused by spontaneous hematoma in patients with hemophilia might miss the treatment by early surgical decompression and progress to permanent nerve damage. We presented our experience with successful surgical management of a brachial plexus tumor-like disorder, which was eventually proved to be an extrinsic muscular hematoma in the vicinity of the plexus.

A 30-year-old man with hemophilia A had numbness and paresthesia on the entire left forearm and hand. He complained of swelling and pain in his left arm and denied a history of trauma. He described nearly complete loss of flexion of his left elbow, wrist and finger joints afterwards.

He missed early operation, due to the high risk of hemorrhage, probably aggravated by surgical intervention. The symptoms worsened throughout the subsequent 2 mo. He was referred to our hospital 2 mo after the onset of symptoms.

The patient suffered from congenital severe hemophilia A.

The patient had no history of smoking, drinking, or familial tumors.

On physical examination, the patient was found to have moderate swelling and tenderness to palpation over the medial side of the left arm. Abundant ecchymosis from the axilla to the medial side of the left arm was noticed. He presented with a mixed sensory and motor deficit. His neurological examination revealed hypoesthesia in the distribution of the lateral antebrachial cutaneous nerve and medial antebrachial cutaneous nerve. Numbness was involved along the median and ulnar nerves of the hand. The motor function loss in his left shoulder flexion (range of motion, 0-60°) was recorded. The significantly decreased elbow flexion and extension on the same side was documented. The severe weakness in wrist flexion (2/5), as well as in flexion and opposition of all five digits was detected. He was unable to grip anything.

Enhanced T2-weighted magnetic resonance imaging in the sagittal and coronal planes showed a hyperintense heterogenic lesion that was adjacent to the axillary segment of the brachial plexus (Figure 1).

Electromyography (EMG) was suggestive of compression of the lateral, medial and posterior cords, which was more predominant in the lateral cord of the brachial plexus.

Based on the combination of history, coagulation assay, EMG and characteristic imaging findings, a presumptive diagnosis of brachial plexus tumor with congenital severe hemophilia A was made initially. However, the frozen and permanent specimens documented peripheral neovascular granular tissue, degenerated muscle fibers, fibrosis, and microscopic foci of hemosiderin consistent with an organized hematoma rather than a neoplasm (Figure 2). Definite diagnosis was muscular hematoma in the brachial plexus region, concomitant with severe hemophilia A. 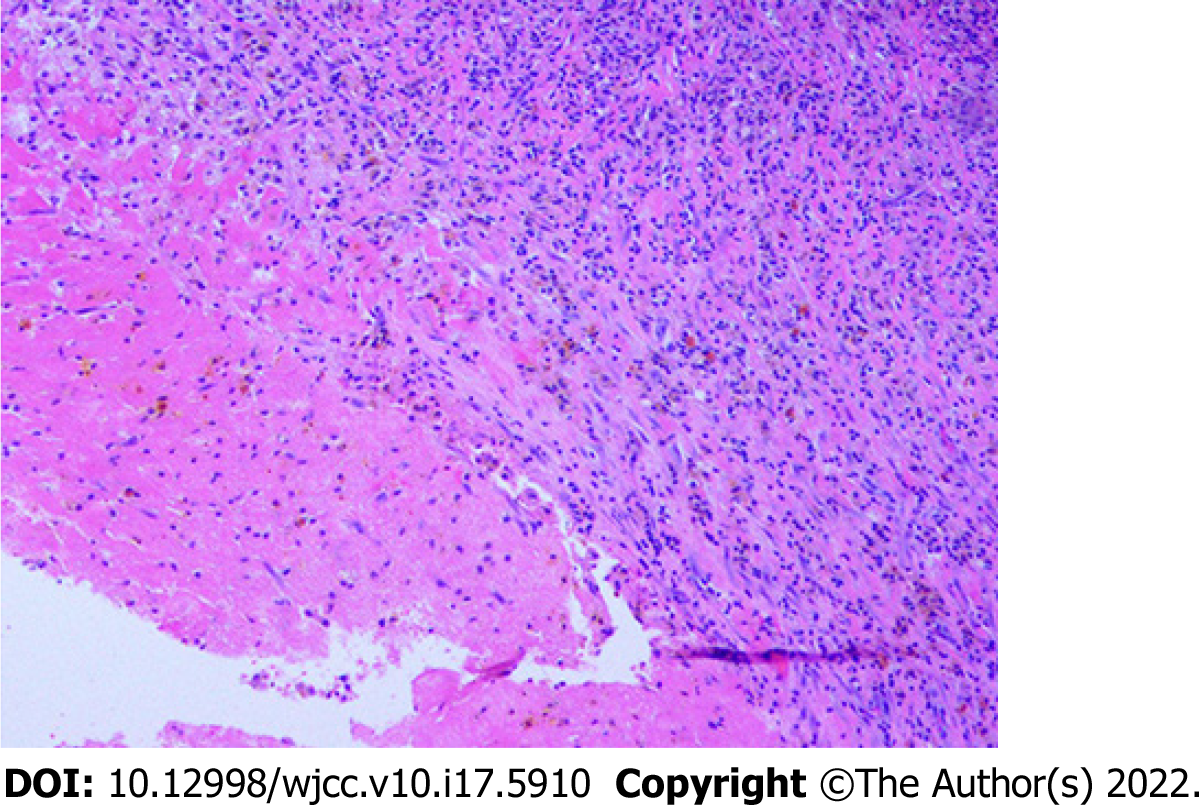 The patient was treated with recombinant factor VIII infusions and his factor VIII level increased towards 100% before surgical treatment.

After shared decision-making and informed consent, the patient underwent surgical resection of the mass. On exploration, we discovered that the brachial plexus lesion was a fibrous-encapsulated mass with organized inflammatory tissue of a brownish color. The organized hematoma and surrounding scar were found to be directly compressing the lateral, medial and posterior cords of the brachial plexus. The internal structure of the nerve was not violated or involved. There was no neuroma noted or obvious intraneural bleeding. The mass along the coracobrachialis muscle was excised and the brachial plexus was released via neurolysis and dissection of the brachial fascia. The cut surface of the resected specimen indicated an organized chronic hematoma instead of a neoplasm (Figure 3). Partial pectoralis major muscle was transected near its insertion but repaired in place at the end of surgery, which provided adequate access for the dissection of the axilla. The patient continued factor VIII replacement therapy for 10 d. While he was being tapered off replacement therapy, an unexpected acute hematoma occurred. Emergency surgical decompression was required. On exploration of the pectoralis major, the expanding hematoma was gently evacuated with suction and forceps. The postoperative course was uneventful, with another 21 d of an aggressive infusion program.

Figure 3 Intraoperative findings of the patient. A: An organized mass was exposed prior to excision (black arrow); B: Brachial plexus neurolysis was performed after the mass resection; C: The cut surface of the resected specimen indicated an organized chronic hematoma rather than a neoplasm.
OUTCOME AND FOLLOW-UP

At 12 months’ follow-up, there was no recurrence or other significant complaint. The clinical symptoms were alleviated and the involved nerves partially recovered when compared to the preoperative results. There was sensory improvement in the region of dermatomal hypoesthesia. The active arc of motion (flexion/extension) of his left elbow and wrist increased to 90° and 50°, respectively. The grip strength of the affected hand measured 35% of the contralateral side (Figure 4). The DASH (Disabilities of Arm, Shoulder, and Hand) score of our patient at final follow-up was 21, compared to 65 preoperatively. The patient was satisfied with the restoration of daily activities and return to the previous work as a manual laborer. 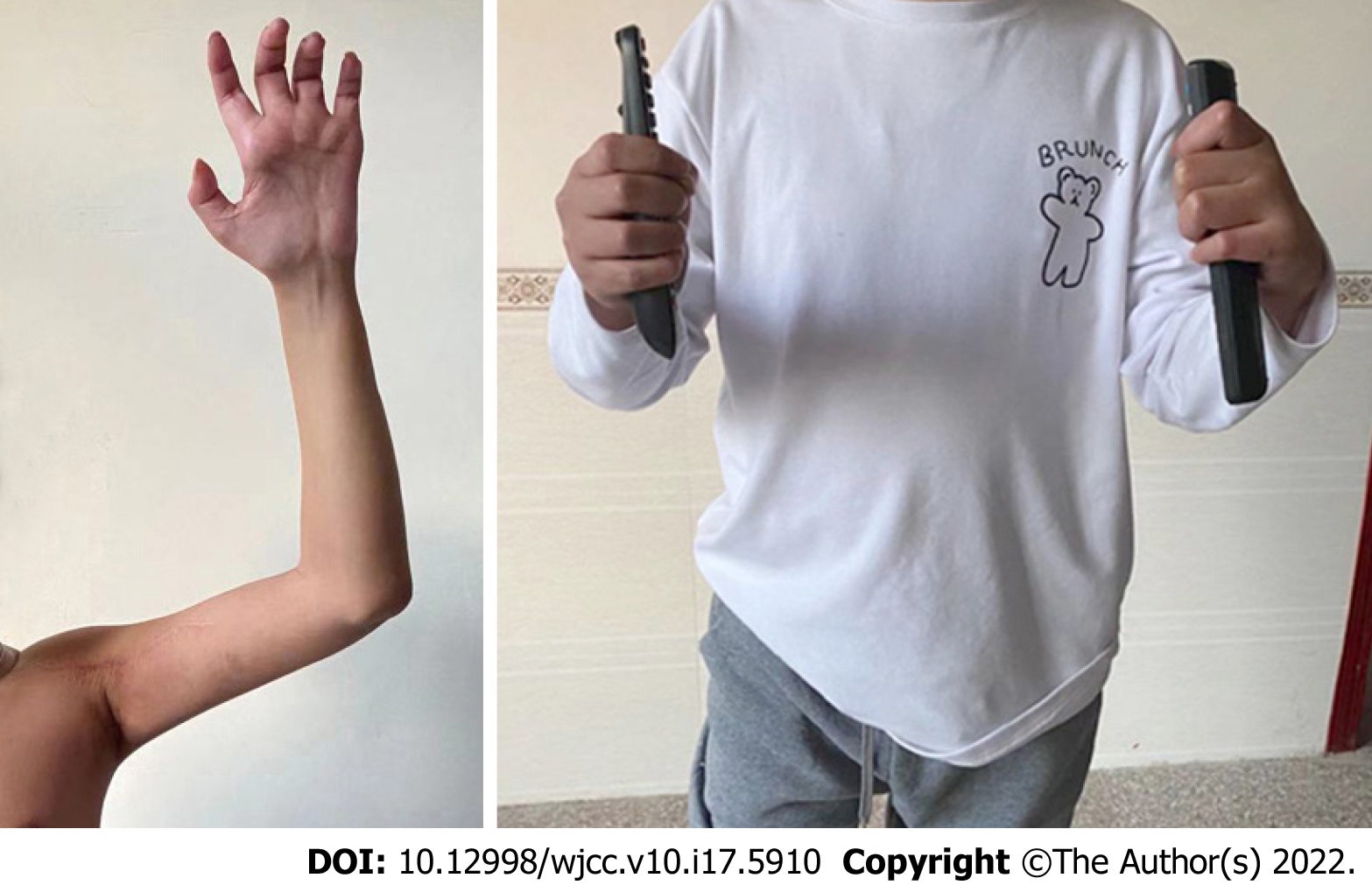 A radiologic plan is necessary to recognize soft tissue lesions with a neural origin, their association with a peripheral nerve, and whether they are a true tumor or a pseudotumor such as a neuroma, hematoma, or peripheral nerve sheath ganglion[1,4]. Accurate diagnosis of these lesions is critical for determining the appropriate management options. Delaying the treatment of a highly aggressive nerve sheath tumor can have devastating consequences, whereas many hematomas resolve without surgery.

Brachial plexus hematomas are rare and can mimic malignant peripheral nerve sheath tumors both radiographically and clinically[4]. The purpose of this case report is to clarify the etiology of brachial plexus lesions, review the differential diagnostic considerations, and discuss the role of imaging modalities, together with the usefulness of electrophysiological tests.

High quality CT or MRI was conducted to delineate tumor location, margins, and relationship to surrounding structures. MRI may also determine whether the contents are in liquid or in solid form[1,3]. Nevertheless, an organized hematoma has no particular differentiating imaging features. The interest in pre-therapeutic biopsy on benign lesions is limited because the sensitivity of this procedure is moderate and the procedure could damage intact fascicles or cause hemorrhage[1].

The findings of EMG studies for this case supported the diagnosis of brachial plexus compressive neuropathy. Establishing peripheral nerve lesions in hemophiliac patients is difficult, since disability or hemarthrosis can also give rise to motor disorders, reflex disturbances and muscular atrophy. Electrodiagnostic evaluation may confirm the diagnosis, pinpoint the lesions, determine the severity of axial discontinuity, and eliminate other clinical entities from differential diagnosis[5]. Recently, the use of intraoperative electrophysiological tests has been an integral part of brachial plexus surgery.

Our patient had already been afflicted with severe hemophilia. Thus, we speculated that the hemophilia-induced expanding hematoma within the soft tissue resulted in pressure on the adjacent brachial plexus. At the site of the hematoma in this case, brachial plexus was vulnerable to get compressed between coracobrachialis muscle hematoma and its overlying fascia. Our experience suggested that surgical intervention for nerve compression with adequate factor replacement should be considered as soon as possible in cases such as this.

To the best of our knowledge, our patient was the first reported case in the literature developing brachial plexus palsy that was ascribed to severe hemophilia without any slight provocation or minor trauma/injury. Ogawa et al[6] discussed the management of a 42-year-old man with underlying moderate hemophilia, as well as compressive brachial plexopathy. In his study, that patient mentioned a history of lifting heavy weights, which was thought to be the cause of the following intramuscular bleeding. Both the Ogawa reported case and our case achieved encouraging functional restoration, despite of the initial underestimation and misdiagnosis.

Finally, our patient experienced a recurrent acute muscle hematoma, and was subjected to an emergency operation. This patient was immobilized with his arm into a sling immediately after the first operation, which perhaps did not offer enough protection and stability for the shoulder joint. Once upon shoulder abduction and external rotation, an acute pectoralis major tear occurred, which eventually progressed to formation of a large hematoma. We therefore infer that strict rest and temporary splint application to the extremity is required to accelerate healing between the ends of the ruptured myofibers and formation of stable scar tissue. However, it should not be unnecessarily prolonged because early mobilization is needed for decrease of adhesion and resorption of scar tissue[7].

In summary, improvements in factor replacement safety and effectiveness have made the performance of major surgical procedures increasingly possible in recent years. Given the short window between symptomatic onset and irreversible histopathologic neural changes, early surgical intervention is crucial and it seems to be an essential precondition for recovery of nerve function. In general, a comprehensive treatment protocol for hemophiliac patients with concomitant entrapment neuropathies, should be developed and clinically validated.