Gitelman syndrome (GS) is an autosomal recessive salt-losing renal tubulopathy arising from mutations in the thiazide-sensitive Na-Cl cotransporter gene. Due to its low incidence and lack of awareness, GS can be easily misdiagnosed or missed in diagnosis.

A 24-year-old male presented with > 4 years of repeated limb weakness without any treatment. The previous day, the patient was bitten by ants and showed weakness of the lower limbs. The patient had hypokalemia (1.66-2.83 mmol/L), hypomagnesemia (0.4 mmol/L), hypocalciuria (1.51-2.46 mmol/d), metabolic alkalosis (7.47-7.54), normal blood pressure, and increased activity of aldosterone and plasma renin activity (PRA) (PRA 6.4 and 16.45 ng/mL/h and aldosterone 330.64 and 756.82 pg/mL in the supine and upright position, respectively). In addition, SLCI2A3 gene mutation with GS was diagnosed. Oral and intravenous supplementation with potassium and magnesium was initiated. Serum magnesium returned to 0.48 mmol/L and serum potassium returned to 3.08 mmol/L, alleviating the patient’s fatigue symptoms.

GS should be considered in patients with hypokalemia complicated with hypomagnesemia. Genetic testing is essential to confirm the diagnosis.

Core Tip: Gitelman syndrome (GS) is easily misdiagnosed or missed in diagnosis due to its low incidence and lack of awareness. Herein, we present a rare case of GS in a young man with limb weakness. This case demonstrates that attention should be focused on GS in patients with hypokalemia complicated with hypomagnesemia. Genetic testing is helpful in confirming the diagnosis.

Gitelman syndrome (GS) is characterized by low blood potassium, low blood magnesium, low blood chloride, low urinary calcium, normal or low blood pressure, alkalosis, and activation of the renin-angiotensin-aldosterone system (RAAS), which are the clinical manifestations of autosomal recessive salt-losing renal tubular disease, also known as familial hypokalemia and hypomagnesemia[1]. The incidence of GS is low and is reported to be approximately 1/40000 in Europeans[2], and 10.3/10000 in Japanese[3] based on the heterozygous carrier rate, and is easily misdiagnosed or missed in diagnosis. We here report a case of GS diagnosed and treated in the Department of Endocrinology, Longhua District Central Hospital, Shenzhen, China.

A 24-year-old male presented with > 4 years of repeated limb weakness and a relapse of 1 d.

Four years ago, the patient developed limb weakness and fatigue, especially in the lower limbs, which could be relieved spontaneously after rest. He could walk and hold objects with both hands. During the period without a specific diagnosis and treatment, the above symptoms occasionally occurred without aggravation but could be relieved spontaneously after rest. One day ago, the patient was bitten by ants and showed weakness in the lower limbs. His blood potassium level was 1.66 mmol/L when examined in the Emergency Department. Following oral and intravenous potassium supplementation and intravenous magnesium supplementation, his blood potassium was reexamined and was found to be 2.22 mmol/L, and the patient was admitted to our department with hypokalemia.

The patient had no medical history.

No member of the patient’s immediate or extended family reported similar symptoms. He denied the use of any herbal medicine, diuretics, or laxatives.

Physical examination revealed a thin man, 156 cm in height, and 33.5 kg in weight. His temperature was 36.5 ℃, respiratory rate was 20 breaths/min, and blood pressure was 116/53 mmHg with a regular heart rate of 100 bpm. Thyroid palpation revealed that his thyroid was normal. Chest auscultation revealed that his lungs were clear and heart sounds were normal. Muscle strength of his left lower limb was grade 4, and that of the right lower and both upper limbs was grade 5.

Laboratory investigations carried out at the time of presentation are summarized in Table 1. We confirmed the persistence of a hypokalemic state secondary to renal potassium wasting, while serum potassium levels remained at approximately 1.66–2.83 mmol/L, and urinary potassium excretion was increased from 102.43 to 120.08 mmol/d. Intriguingly, we observed hypomagnesemia (0.4 mmol/L), hypocalciuria (1.51-2.46 mmol/d), and metabolic alkalosis (7.47-7.54). Urinalysis did not show any alterations. Serum creatinine and creatinine clearance were slightly higher than normal. Glycosylated hemoglobin and plasma cortisol were within the normal range. Echocardiography and renal ultrasound did not show any abnormalities. Liver function, thyroid function, and other biochemical parameters were normal. Secondary hyperreninemic hyperaldosteronism was detected in the supine and upright positions (PRA 6.4 and 16.45 ng/mL/h and aldosterone 330.64 and 756.82 pg/mL, respectively) (Tables 2 and 3).

Computed tomography revealed hyperplasia at the junction of the left adrenal gland and calcification of the diverticulum in the right renal pelvis. Electrocardiography showed sinus rhythm and low T wave level.

The Guangzhou KingMed Center for Clinical Laboratory tested the genes of this patient, including the exon sequence of SLC12A3 gene. The DNA extracted from the samples was tested by gene sequencing, and possible gene mutations were identified by comparing with the reference sequence. Two pathogenic mutations related to GS (Table 3) were detected: heterozygous rs768527231 Exon1 missense mutation C.248G>A (p.Asg83Gln), which is included in the dbSNP147 database, and Exon21 nonsense mutation C.2532G>A (p.Trp844*), confirming the diagnosis of GS (Figure 1). 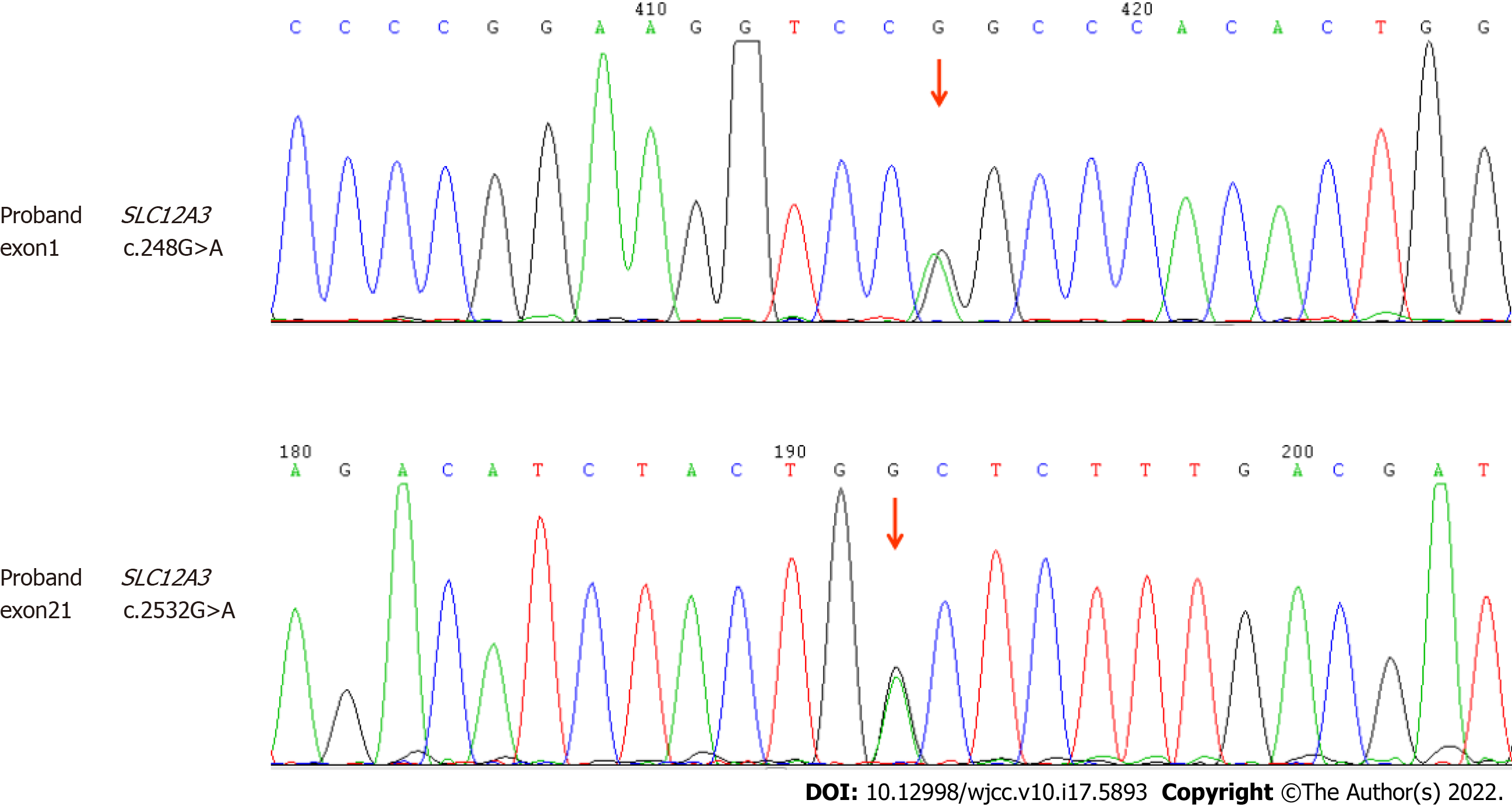 Oral and intravenous supplementation with potassium and magnesium was initiated.

Hypokalemia is a common electrolyte disorder in clinical practice. Severe hypokalemia can lead to life-threatening reactions, such as dyspnea and arrhythmia. There are several causes of hypokalemia that can lead to insignificant limb weakness symptoms and can be easily ignored by patients; therefore, the diagnosis is challenging.

The diagnosis and differential diagnosis of hypokalemia was carried out. The patient was a young male with recurrent fatigue. Repeated blood potassium (3.5 mmol/L) and synchronous 24 h urine potassium excretion increased to > 25 mmol/d, indicating renal potassium loss. The patient had a normal appetite, adequate potassium intake, no history of using diuretics or a large dosage of insulin, and no long-term nausea, vomiting, and diarrhea; therefore, gastrointestinal loss was not considered. Metastatic hypokalemia was not supported as hyperthyroidism was absent and the patient’s blood glucose was normal. The patient had significantly elevated aldosterone levels, which excluded exogenous mineralocorticoid hyperplasia, Cushing syndrome, adrenal congenital 17-α/11-β hydroxylase deficiency, and Liddle syndrome. The patient’s blood pressure was normal, renin activity was increased, and no renal mass was observed. Primary aldosteronism and renin tumors were excluded. The patient did not have renal artery stenosis or proteinuria, and blood gas analysis suggested metabolic alkalosis. Therefore, renal tubular acidosis, renal artery stenosis, and chronic kidney disease were not considered. The patient developed the disease as an adult and was thin and small since childhood, which was related to long-term hypokalemia, with hypomagnesia, hypochloremia, and hypocalciuria. Genetic testing suggested a heterozygous variation in the SLC12A3 gene. Two pathogenic mutations related to GS were detected in the SLC12A3 gene region of the patient, including heterozygous rs768527231 Exon1 missense mutation C.248G > A (p.agsg83gln), which is included in the dbSNP147 database, and the Exon21 nonsense mutation C.2532g > A (p.TP844*)[5], which was expected to change the amino acid position 844 of the encoded protein from Trp to stop codon, leading to protein translation terminated in advance. Based on these findings, the diagnosis of GS was established.

Furthermore, GS is an autosomal recessive genetic disorder, first described as an individual condition by Gitelman et al in 1966. GS can be attributed to structural and/or functional abnormalities of the sodium-chloride cotransporter (NCCT) due to the loss-of-function mutation in the gene SLCI2A3, encoding the thiazide diuretic sensitive NCCT located in the distal renal tubules[6].

The decrease in serum magnesium level may be caused by increased Na+ reabsorption under the action of aldosterone, which results in the formation of luminal side negative potential and increases the level of urinary magnesium through increased Mg2+/Na+ exchange. This phenomenon may be related to the inactivation of transient receptor potential cation channel 6 (TRPM6) located at the apical domain of the distal convoluted tubules and brush border of the duodenal magnesium-transporter cells, resulting in decreased blood magnesium[7,8,10]. Simultaneously, hypomagnesemia can reduce the release of parathyroid hormone[7].

The mainstay of treatment for GS includes individualized lifelong administration of potassium and magnesium supplements (a strategy implemented in the present patient) combined with aldosterone antagonists and/or potassium-sparing agents, such as spironolactone, amiloride, and eplerenone to induce clinical remission.

A worldwide consensus[1,9] suggested that GS patients’ blood potassium and magnesium levels should be maintained at > 3.0 mmol/L and > 0.6 mmol/L, respectively.

This patient was mainly treated with potassium chloride and magnesium sulfate. After treatment, the patient’s clinical symptoms were relieved, but blood potassium did not reach the normal level; hence, regular follow-up was essential. GS is an autosomal recessive hereditary disease. Riveira-Munoz et al[11] suggested that the nature/position of SLC12A3 mutation, combined with male gender, is a determining factor in the severity of GS. Therefore, investigation of the family by lineal gene testing is essential.

GS can be easily misdiagnosed or missed in diagnosis due to its low incidence and lack of awareness. Therefore, it is necessary to consider the possibility of GS in patients with clinical hypokalemia, low urinary calcium and low blood magnesium, and improve genetic screening for accurate diagnosis.