Pulp revascularization has become a new method for the treatment of periapical diseases in young permanent teeth in recent years. Through root canal flushing and disinfection, avoiding mechanical preparation, guiding apical stem cells into the root canal and promoting the continuous development of tooth roots, it has achieved good clinical curative effects. But in adult patients with chronic periapical periodontitis with immature roots and open apices, apical barrier technology is often used to treat these teeth.

Pulp revascularization of a 26-year-old patient's tooth was performed using cefaclor instead of minocycline and iRoot BP instead of mineral trioxide aggregate as intracanal medication. The case was followed up for 36 mo. Observations showed evidence of regression of clinical signs and symptoms, resolution of apical periodontitis and no discolouration of affected teeth.

Pulp revascularization has become a new method for the treatment of periapical diseases in young permanent teeth in recent years. Through root canal flushing and disinfection, avoiding mechanical preparation, guiding apical stem cells into the root canal and promoting the continuous development of tooth roots, it has achieved good clinical curative effects[1,2]. Initially, Holden et al[3] stimulated apical tissue bleeding to treat young permanent tooth periapical disease according to the mechanism of trauma healing caused by blood clots. They used the blood cells of necrotic teeth to regenerate tissue in the root canal but only formed approximately 2 mm of granulation tissue in the root tip. With the improvement of root canal disinfection and crown sealing technology, in 2001, Iwaya et al[4] placed antibiotics in the root canal for disinfection when treating a young permanent tooth patient with chronic periapical disease, stimulated apical bleeding and filled the root canal. Finally, the crown was tightly sealed with mineral trioxide aggregate (MTA). After 30 mo of follow-up, the root of the affected tooth continued to develop, the root canal wall thickened, the root tip closed, and an electrical activity test continued to show positive results[4]. An increasing number of clinicians have used this method and obtained similar results.

The biological mechanism of pulp revascularization is still unknown. The main process is thorough and effective root canal disinfection. Root canal disinfection and chemical irrigation are used to remove infectious materials in the root canal. Commonly used rinsing fluids include 1.5%-3% sodium hypochlorite solution and 17% EDTA solution[5]. After chemical preparation, the root canal is sealed with a triple antibacterial paste, which is generally composed of ciprofloxacin, metronidazole and minocycline[6,7]. During the treatment process, it is best to protect the residual dental pulp tissue, dental pulp stem cells and apical papillary stem cells. Studies have shown that stem cells that isolated from various problems of the oral cavity have emerged as important sources for bone and dental regulation, given stem cells plasticity, they can differentiate into specific cell lineages with a capacity of almost unlimited self-renewal and release of trophic/immunomodular factors[8-10]. These stem cells have different differentiation potentials induced by signalling molecules and the bioactive material MTA, which can form dental pulp and dentin and periodontal ligaments[11,12]. Subsequently, a regenerative scaffold based on blood clots is formed, and growth factors are provided. Some scholars have added platelet-rich plasma or platelet-rich fibrin[13]. The effect is good, but this approach involves blood product extraction and technical sensitivity. Its application prospects are still unknown. Finally, a tight crown seal is performed to provide a good environment for stem cell proliferation and differentiation, thereby promoting the continued development of tooth roots. Here we present a male adult patient with chronic periapical periodontitis with immature roots and open apices, and this tooth used pulp revascularisation to show a favourable result.

A 26-year-old man presented with an abscess for more than one month associated with a right mandibular posterior tooth.

A 26-year-old male presented for more than one month history of an abscess on the right mandibular posterior tooth. The patient did not receive any treatment for the affected tooth.

The patient had no history of any previous disease.

The patient had no personal and family history.

An extraoral examination revealed no abnormalities. There were no palpable lymph nodes in the head and neck. An intraoral examination showed that the abscess was localized buccally in the periapical region of the right mandibular second premolar (Figure 1A). Pressing the abscess showed yellowish white pus discharging. The occlusal surface of the affected tooth showed an abnormal central cusp worn away, a mild response to percussion/palpation, a periodontal pocket probing depth within normal limits (3-4 mm), and no pathologic tooth mobility. The tooth did not show any response to cold and hot pulp sensitivity tests. 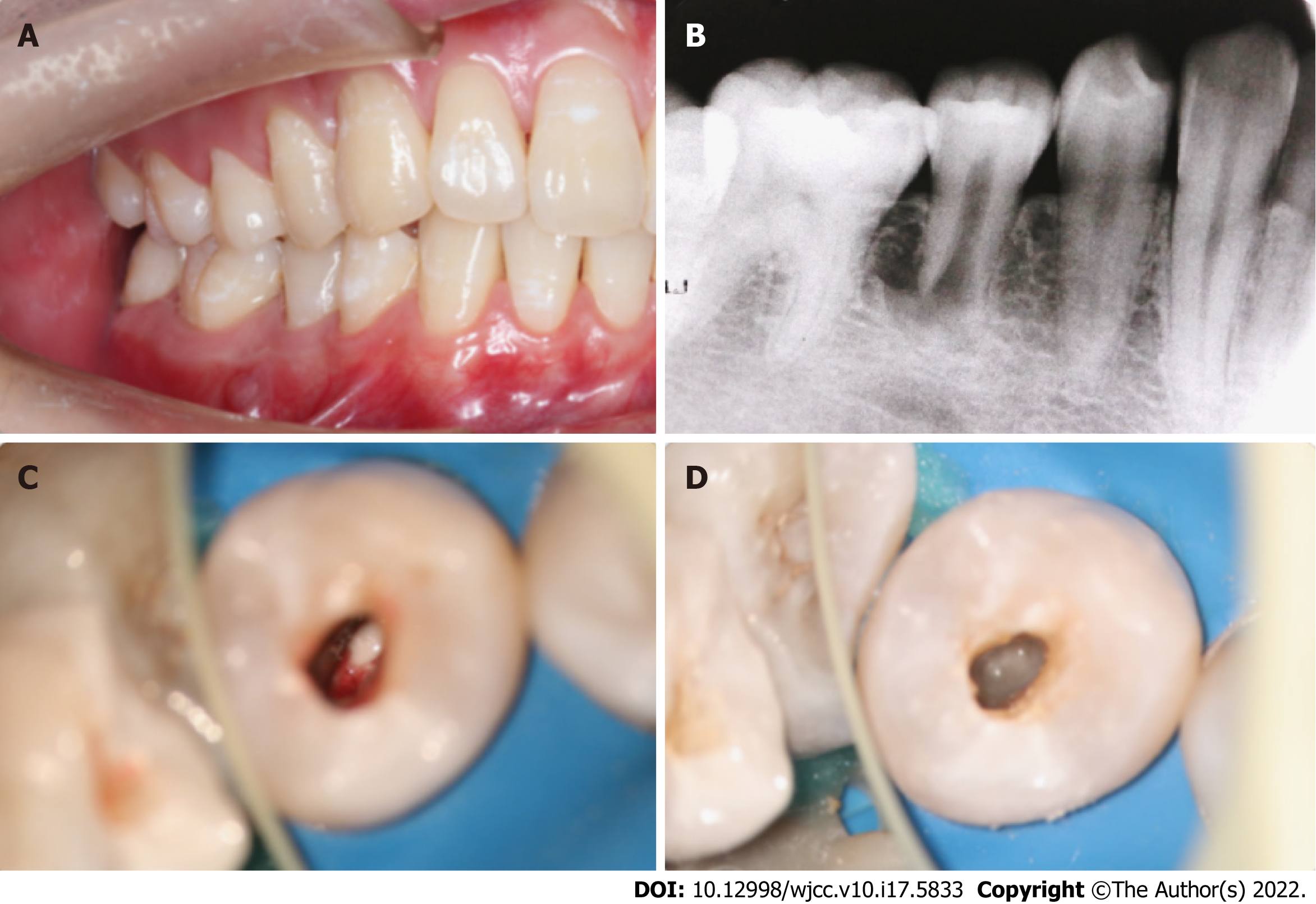 A radiographic examination revealed the presence of a periapical lesion associated with an immature root with an apical (Figure 1B).

Based on the patient’s history and clinical and radiographic examinations, the right mandibular second premolar was diagnosed with chronic periapical periodontitis.

Local anaesthesia with 2% lidocaine containing 1:100000 epinephrine was administered. The tooth was isolated with a rubber dam, and the pulp cavity was accessed with a carbide bur under a microscope. Pus could be seen in the root canal (Figure 1C). The root canal was rinsed with 3% sodium hypochlorite and 17% EDTA and dried with sterile paper points. Granulation tissue could be seen at the apical. The working length (WL) 0.5 mm short of the radiographic apex was determined with an electronic apex locator and periapical radiography (WL = 15 mm). Due to the large apical foramen, chemical preparation was emphasized, and mechanical preparation was assisted. Low-concentration (0.1-1.0 mg/mL) triple antibiotic paste was used to seal the root canal (Figure 1D), which was composed of ciprofloxacin, metronidazole and cefaclor (1:1:1). The access cavity was closed with a sterile cotton pellet and temporary restorative material.

Two weeks after the first treatment visit, the localized sinus had subsided, and the tooth was asymptomatic (Figure 2A). Local anaesthesia with 2% mepivacaine without a vasoconstrictor was administered. The tooth was isolated with a rubber dam, and the seal was removed with a carbide bur under a microscope. Triple antibacterial paste in the canal was removed with copious amounts of 3% sodium hypochlorite and 17% EDTA irrigation and dried with paper points. A #10 K-file was used to penetrate the periapical tissue and provoke periapical bleeding into the canal, reaching the position of the enamel-cemental junction (Figure 2B). After the bleeding became semicoagulated, an absorbable gelatine sponge was placed as a stop point (Figure 2C), and then an iRoot BP of approximately 3-mm thickness was placed over the absorbable gelatine sponge (Figure 2D). A moist cotton pellet was placed over the iRoot BP, and the access cavity was closed with temporary restorative material. 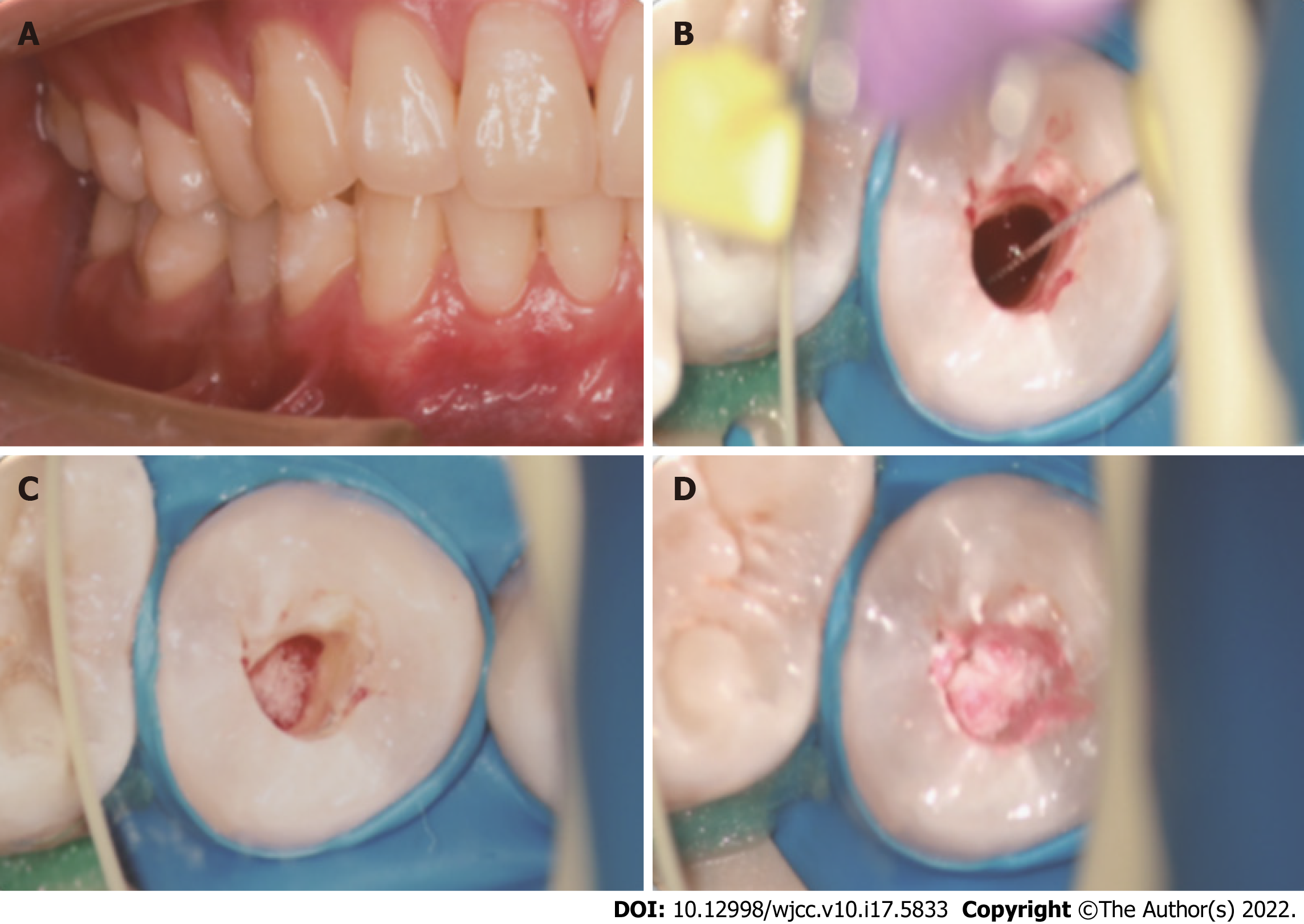 One day after the second treatment visit, the temporary restorative material and cotton pellet were removed from the access cavity. It was determined that the iRoot BP had completely hardened. The access cavity was restored with light-curing composite resin. 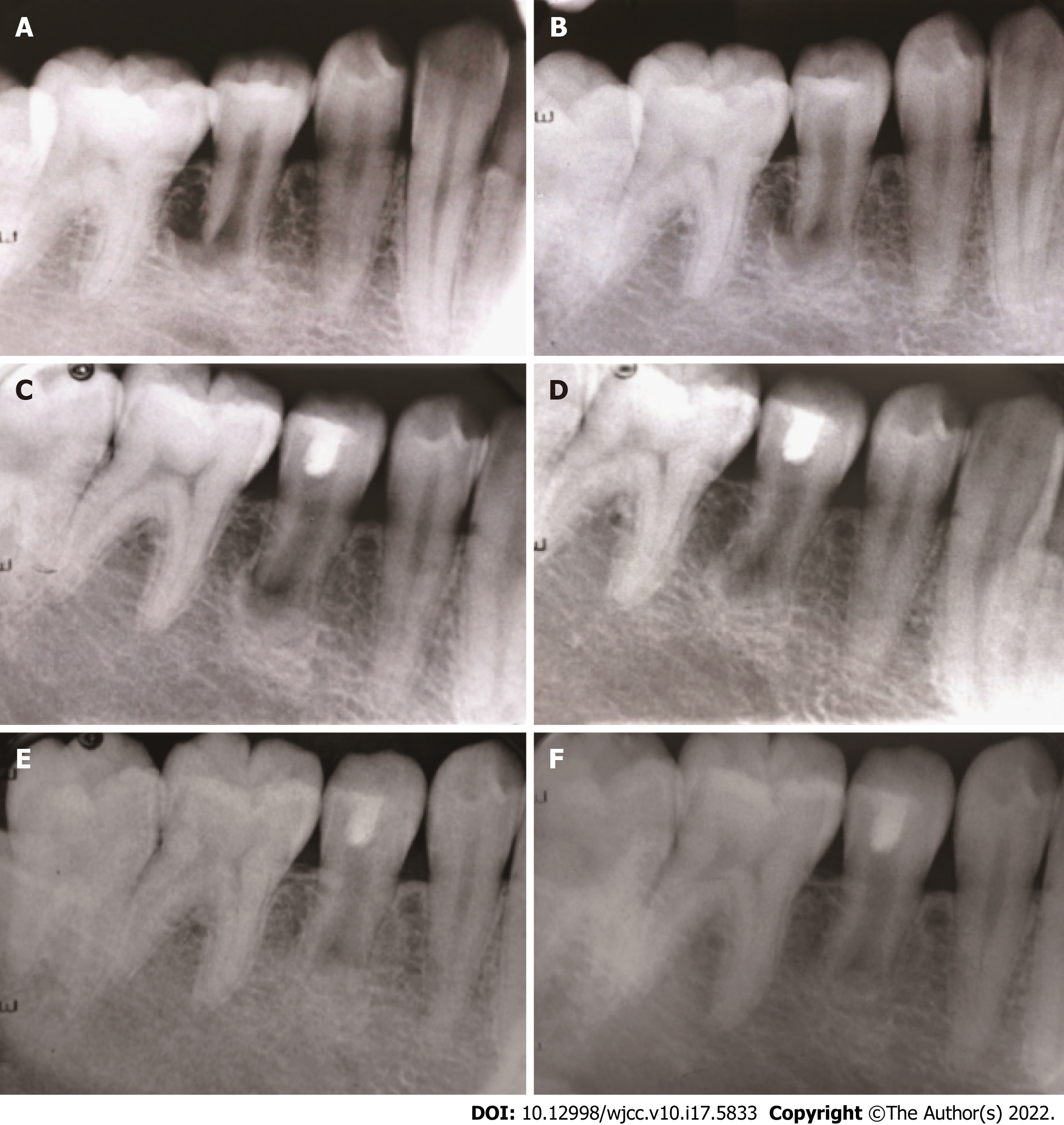 In the present case report, we have described the potential of using pulp revascularization to treat adult permanent teeth with apical periodontitis. In adult patients with chronic periapical periodontitis with immature roots and open apices, apical barrier technology is often used to treat these teeth. Apical barrier technology refers to the use of MTA to form an immediate artificial barrier in the apical area for sealing[14]. However, this technology has a high cost and difﬁcult clinical manipulation. In addition, clinical treatment and follow-up visits found that apical barrier technology caused less root development and no thickening of the root wall or extension of the root length[15]. In this case, pulp revascularization with easy clinical manipulation was used, and the final effect on affected teeth was good. However, there is inadequate literature to support that pulp revascularization has a good effect on adult patients with immature roots and open apical teeth[15].

At present, there is no consistent standard for evaluating the efficacy of pulp revascularization. The curative effect has been mainly based on clinical manifestation, pulp vitality examination and radiographic examination. According to the American Association of Endodontists guidelines, the primary goals are healing apical periodontitis and eliminating clinical symptoms. Increased thickening of the canal walls and/or continued root development as well as a positive response to cold and hot pulp sensitivity tests are desirable but not essential to determine success[16]. In this case, the periapical lesions healed, but root development stopped and remained in a static state. The reason may be the lack and low activity of stem cells in adult permanent teeth, although stem cells cannot provide the best function. Therefore, the selection and implantation of endogenous or exogenous biological scaffolds may be a very important step in the treatment of adult permanent teeth. However, at present, there is no literature citing which kind of scaffold has a better curative effect on adult permanent teeth.

A common complication of revascularization is tooth discoloration. Previous studies have suggested that tooth discoloration is related to the triple antibiotic paste. Minocycline is considered to form a chelate with calcium ions in dentinal tubules, which changes the refractive index of teeth and causes tooth discoloration[17]. Cefaclor is an antibiotic alternative to minocycline. Thibodeau et al[18] and Dabbagh et al[19] proposed replacing minocycline with cefaclor and reported successful regenerative treatment using this technique. It has also been suggested that the possible mechanism of tooth discoloration may be related to the interaction between MTA and blood and the blockade of dentinal tubules[20]. In this case, there was no obvious discoloration of the affected teeth, which may be because cefaclor was used instead of minocycline and iRoot BP was used instead of MTA. Some studies have found that iRoot BP promotes increased alkaline phosphatase activity compared with MTA, and iRoot BP has better biocompatibility and repair performance and promotes the expression of factors related to odontogenic differentiation, so it has a higher biomineralization ability and induces dentin differentiation[21]. Until a large number of reliable clinical cases prove that cefaclor and iRoot BP improve the success rate, this approach can be used according to the principle of evidence-based medicine.

In this case, it was possible to observe that pulp revascularisation in immature roots with open apical teeth was clinically and radiographically relatively successful, as was evident in the 36 mo of follow-up, with repair of the periapical lesion. Such facts demonstrate that immature roots with open apical teeth, necrotic pulp and apical periodontitis can be treated using revascularization. It may be preferable to fill the root canals with the host's own vital tissue rather than with artificial material. However, randomized, prospective clinical trials are needed to demonstrate that the treatment outcome of pulp revascularisation is better.