Mycosis fungoides (MF) is a form of lymphoma derived from heterogeneous T cells, and eyelid involvement is extremely rare. The common methods to treat eyelid involvement are radiotherapy and chemotherapy, but their efficacies are limited. Herein, we report a case of advanced-stage MF eyelid involvement, propose ultrasound (US)-guided microwave ablation (MWA) therapy and present a literature review.

A male patient was admitted to our hospital in June 2018 and diagnosed with MF via radiological and histopathological examinations. The patient’s condition was not well controlled by various conventional chemotherapies. US-guided MWA was performed to relieve the patient’s symptoms and improve his quality of life, showing satisfactory efficacy.

Eyelid involvement is one of the most troublesome clinical problems for advanced-stage MF patients. This is the first report on the use of US-guided MWA as a palliative therapy for MF eyelid involvement; the treatment successfully relieved the patient’s clinical symptoms and reduced his anxiety behaviours. Our study sheds new light on methods for improving the clinical management of eyelid involvement in MF.

Core Tip: In this case report, we propose the use of ultrasound-guided percutaneous microwave ablation for the treatment of advanced mycosis fungoides eyelid involvement. Compared with traditional surgical methods, it has less trauma, faster recovery and fewer side effects. As a palliative treatment method, it can greatly alleviate the patient's clinical symptoms and improve the quality of life.

Mycosis fungoides (MF) is the most common form of cutaneous T-cell lymphoma (CTCL), accounting for approximately 50% of all cutaneous primary lymphomas[1]. Most MF patients show a chronic course with slow progression; however, nonspecific features such as skin patches and plaques can result in misdiagnoses and rapidly progressing disease[2]. Advanced-stage MF has a worse prognosis, and only a few patients achieve long-term survival with allogeneic stem cell transplantation[3]. Ultrasound (US)-guided microwave ablation (MWA) is a novel method for inoperable tumours and has been proven to be effective for various tumours, namely, lung, prostate, breast, colon, rectum, lung and cervix cancers[4]. The main purpose of palliative MWA for malignancies is to reduce tumour burden, control tumour progression and achieve symptom relief[5]. Here, we described the case of a male patient treated with US-guided MWA for MF eyelid involvement.

A 52-year-old man was admitted to our hospital in March 2020 because of continuous enlargement of the left eyelid mass with swelling and pain.

The patient was diagnosed with syphilis two years prior and received treatment.

There was no relevant personal or family history.

Physical examination revealed that the skin was scattered with rashes, and a palpable mass approximately 2 cm × 2 cm in size with tenderness was detected in the right groin. There were multiple skin masses and plaque-like rashes on the frontal face; the largest was an approximately 3 cm × 4 cm mass on the left eyelid. 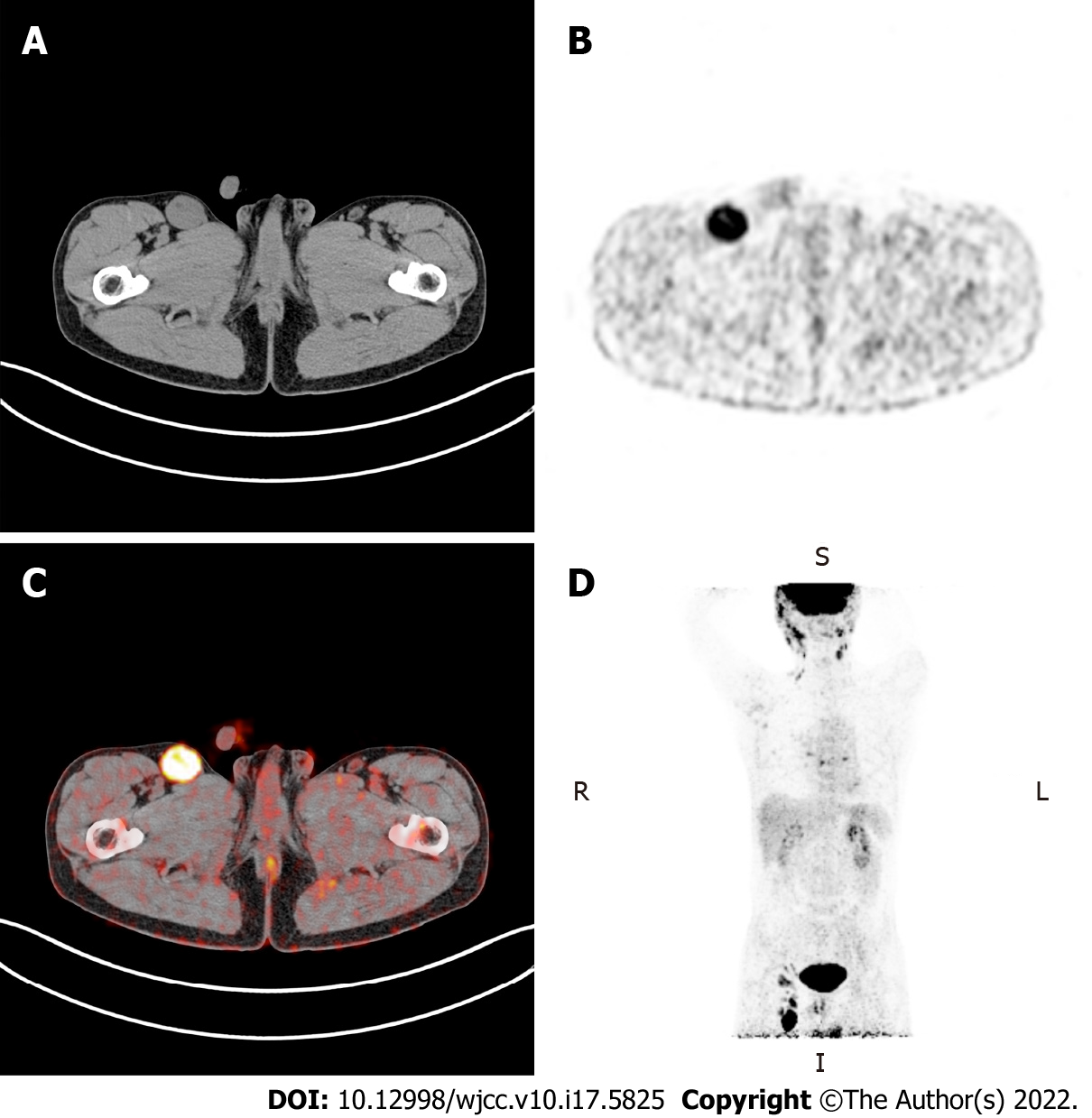 Orbital CT showed swelling of the facial, periorbital and intraorbital soft tissues on the left side with mass shadows and compression of the left eyeball and extraocular muscle (Figure 2).

The patient was diagnosed with MF involving the left eyelid.

The doctors ruled out radical resection due to the patient’s condition. Given the unsatisfactory effect of chemotherapy, US-guided MWA was recommended in May 2020 as a palliative treatment to alleviate the symptoms of ocular compression and pain. An ECO-100A1 microwave therapeutic system (Nanjing ECO Microwave System Co., Ltd., Nanjing, China) consisting of a microwave generator, a hollow water-cooled shaft antenna (16 Guage) and a flexible coaxial cable (Figure 5A and B) was employed, and the whole ablation process was monitored by US in real-time. The optimal puncture paths were determined with the guidance of ultrasonography. Lidocaine (2%, 10 mL) was injected for topical anaesthesia, while saline (20 mL) was used to protect the surrounding tissues. The needle pin was accurately inserted into the eyelid mass under ultrasonic dynamic monitoring to initiate MWA treatment with a microwave instrument with a power output of 35 W. The echogenicity of the microwave needle was continuously enhanced with the release of microwave energy (Figure 5C), while moving-spot technology was used to ensure complete ablation. Ablation was accomplished when CDFI revealed no blood flow signal and when no distinct enhancement was detected in the mass by CEUS. The ablation procedure took 6 minutes and 10 s in total, and the patient recovered well postoperatively. The patient received 4 courses of the CVP (cyclophosphamide 300 mg day 1-5; vincristine 2 mg day 1; dexamethasone 10 mg day 1-5) chemotherapy regimen after MWA. 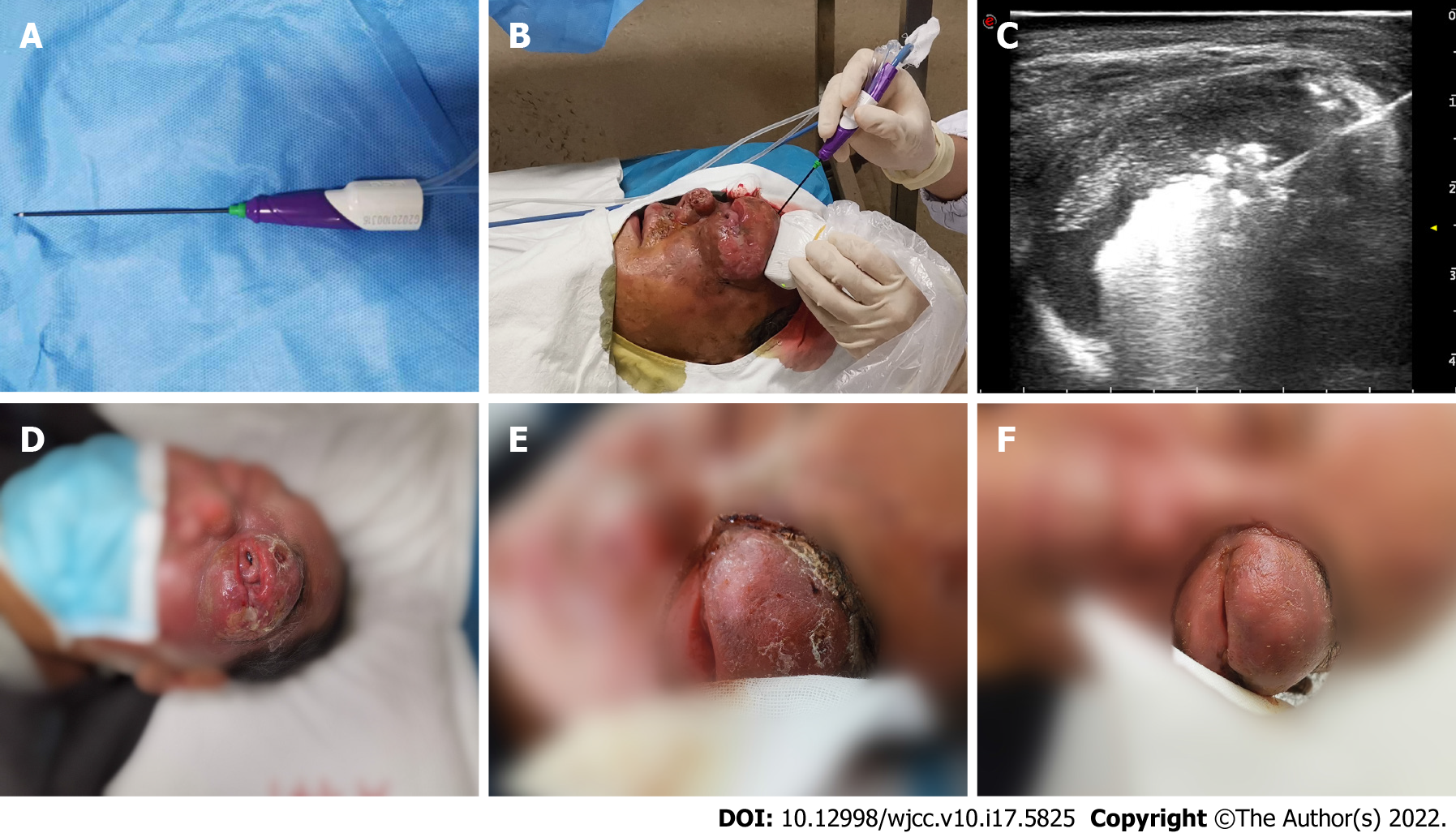 Macroscopic examination showed that the eyelid mass had decreased in size, and the patient reported significant alleviation of the compression-related symptoms after MWA (Figure 5D-F). Three months later, re-examination via orbital CT indicated that eyeball compression and deformation were significantly improved. Anti-PD1 monoclonal antibody or anti-CD30 monoclonal antibody therapy was recommended to prevent disease progression, but the patient refused further treatment and died in January 2021.

MF is the most frequent subtype of CTCL and belongs to a group of heterogeneous T cell-derived extranodal non-Hodgkin lymphomas[6]. Diagnosis of MF in the early stages is challenging and requires a combination of clinical, pathological and immunohistochemical analyses[7]. Although the survival time of early-stage MF patients is similar to that of the general population, those with advanced-stage MF have poor prognoses and a median survival time under five years[8]. Regrettably, many patients miss optimal opportunities for treatment due to misdiagnosis. Systemic treatments (biological and targeted therapies) alone or combined with skin-directed therapies and chemotherapies are the most common interventions for advanced-stage MF. Although many patients initially respond well to treatment, the duration of this response is limited[9]. The aim of the aforementioned treatments for patients with advanced MF is to alleviate symptoms and improve quality of life; stem cell transplantation is currently the only method that provides an opportunity to achieve radical cure[10,11]. Many patients cannot easily access systemic and standard treatments for various reasons, such as poor economic status and limited access to medical care.

In this case, concurrent involvement of the left upper eyelid was observed in a patient with advanced-stage MF. He experienced persistent mechanical ocular compression and pus discharge from the large mass. Although chemotherapy provided some relief, the mass rapidly increased after chemotherapy ended, causing the patient substantial physical and psychological stress. Surgical excision was considered risky and likely to lead to infection due to the patient’s poor general condition. Percutaneous thermal ablation is a minimally invasive approach that creates a smaller wound than surgery and is easier to heal from. Percutaneous thermal or energy-based ablation for various tumours under real-time imaging guidance has been widely applied since the 1990s[12]. The most frequently used high temperature-based techniques in recent years are MWA and radiofrequency ablation. Hyperthermic injury caused by thermal ablation damages the cell membrane via direct or indirect mechanisms, inducing cell death and tumour destruction[13]. Compared to radiofrequency, microwave energy produces greater temperatures and covers larger areas; thus, MWA is superior for treating large tumours[14]. Furthermore, areas treated with MWA generally show clearer boundaries than those treated with other thermal therapies[15]. Consistent with our expectations, the mass rapidly reduced in size when chemotherapy was combined with MWA. Moreover, the patient’s ocular compression and pus discharge symptoms markedly improved, and he regained some perception of light. While the mass increased in size again two months later, the patient reported obvious attenuation of ocular compression, which was also evidenced by a CT scan in August 2020. We considered that even though MWA failed to completely eradicate the mass, coagulation necrosis of the tissue caused by the high temperature may have prevented further intraorbital infiltration to some extent[16].

Eyelid involvement in MF is not frequently reported, and local percutaneous thermal ablation for this neoplasia has not been previously attempted. We reviewed the literature published over the past two decades (from 2000 to 2021) in PubMed (https://pubmed.ncbi.nlm.nih.gov/) and seven cases of MF eyelid involvement were retrieved (Table 1)[17-22]. Almost all the patients were male except one 33-year-old female, and the average age was 59 years. In five cases with inconsistent outcomes, overall survival times were not significantly affected by local radiotherapy, psoralen ultraviolet A therapy or non-local treatment. These findings are likely ascribable to the advanced stage of the disease and the poor overall condition of the patients; thus, the patients only survived for a number of months after diagnosis. Only one male patient with an eyelid mass as the exclusive and initial symptom survived over 13 years. Symptomatic relief was more important than a complete cure for these patients in such a context. However, multiple X-ray exposures may lead to faint erythema and moist desquamation, exacerbated in MF patients. In recent years, percutaneous MWA has been recognized as a safe and effective technique widely used in various fields of medicine. In addition to conventional locations, such as the liver, kidney and thyroid, MWA has been gradually applied to unique sites, such as the bone, lung and bile duct, achieving excellent outcomes[23]. Furthermore, MWA has unique advantages in spherical lesions and superficial locations; thus, this approach was considered suitable for the eyelid mass in this case. Under the guidance of US, operators could observe the ablation range in real-time and with a clear visual of the operation, while needle placement could be flexibly handled to ensure precision. The high temperature causes tissue charring, leading to shrinkage of the mass. Physiologically, malignant CD4+ T cells play a vital role in the development of MF, while Th2 cytokines (which secrete IL-4, IL-5 and IL-10) account for the majority of lymphocytes arising from CD4+ Th0 cells[24]. Dumolard et al[25] reported that IL-12 secretion increases and IL-4 and IL-10 secretion decreases after MWA, thus inducing an antitumour effect. Based on this finding, it was presumed that MWA plus immunotherapy combination therapy might enhance the antitumour immune response and improve the curative effect of MF. Nevertheless, the patient refused other higher-level treatment options for several reasons. Further studies remain to be conducted to investigate whether repeated MWA can improve the efficacy of immunotherapy in MF patients.

The psychological status of haematologic malignancy patients requires more attention due to the poor prognosis and need for repeated treatments. Recent research has also demonstrated that palliative treatments are feasible and acceptable, which promises improvements in patient care[26]. In this case, the patient exhibited serious symptoms of depression and anxiety during chemotherapy. He became irritated and refused to undergo continuous long-term treatment even though he was in a deteriorated condition. After receiving MWA, his mental condition recovered gradually when he realized that the mass had shrunk. Additionally, palliative treatments such as MWA also reflect humanistic care for patients, which plays a crucial role in subsequent treatment episodes.

We described a male patient with advanced-stage MF eyelid involvement who underwent US-guided MWA. In this case, MWA was shown to be a safe and effective treatment for preventing the mass from further compressing the eyeball, and it may also play a remarkable role in dramatically alleviating patients’ clinical symptoms and anxiety. Regrettably, the patient did not receive more advanced treatments, and the therapeutic value of WMA in combination with other modalities deserves further investigation.