A 64-year-old man presented to the oncology outpatient clinic with a history of dysphagia for 2 mo, and was diagnosed with locally advanced esophageal squamous cell carcinoma (stage IIIB). Radiotherapy was initiated to alleviate dysphagia due to malignant esophageal stenosis; however, the patient exhibited consciousness disturbances starting on day 10 of radiotherapy. Brain magnetic resonance imaging indicated the development of Wernicke encephalopathy. Subsequent treatment with thiamine led to rapid improvement in the patient’s neurological symptoms.

A 64-year-old man was admitted to our hospital with complaints of progressive difficulty in swallowing.

The patient’s symptoms started 2 mo prior, with recurrent episodes of difficulty in swallowing. He could ingest fluids with ease, but semi-liquid foods only with difficulty. He also reported feeling fatigued.

There was no remarkable medical history. He had a history of smoking for 20 years, but no history of alcohol or drug consumption.

The patient had a disease-free personal and family history.

The patient was emaciated and had a body mass index of 19.88 kg/m2. There were no mental status changes, cerebellar symptoms, or abnormal eye movements. No clinical ophthalmoplegia or encephalopathy was detected. The other items of the physical examination were normal.

The patient refused surgery or chemotherapy. In order to alleviate dysphagia due to malignant esophageal stenosis, he received 60 Gy of local radiotherapy in 30 fractions without concurrent chemotherapy. Repeated vomiting and dorsalgia occurred during radiotherapy, without diarrhea. A parenteral nutritional supplement including high glucose but no thiamine was administered. On day 8 of radiotherapy, the dysphagia status was markedly improved. From day 10 of radiotherapy, the patient gradually displayed apathy, disorientation, and passivity; was disinterested in his surroundings; and slept abundantly. On neurological examination, he was minimally responsive to verbal and painful stimuli, uncooperative for the finger-to-nose examination, had a slow pupillary response to light, and a Glasgow coma scale score of 10. This was followed by the onset of lethargy on day 12 of radiotherapy. An emergency brain CT scan performed immediately was normal. Brain magnetic resonance imaging (MRI) showed bilateral symmetrical hyperintensities in the dorsal thalamus, the periventricular region of the third ventricle, and around the cerebral aqueduct as seen on T2-weighted imaging, fluid-attenuated inversion recovery (FLAIR), and diffusion-weighted imaging (DWI) (Figure 1). 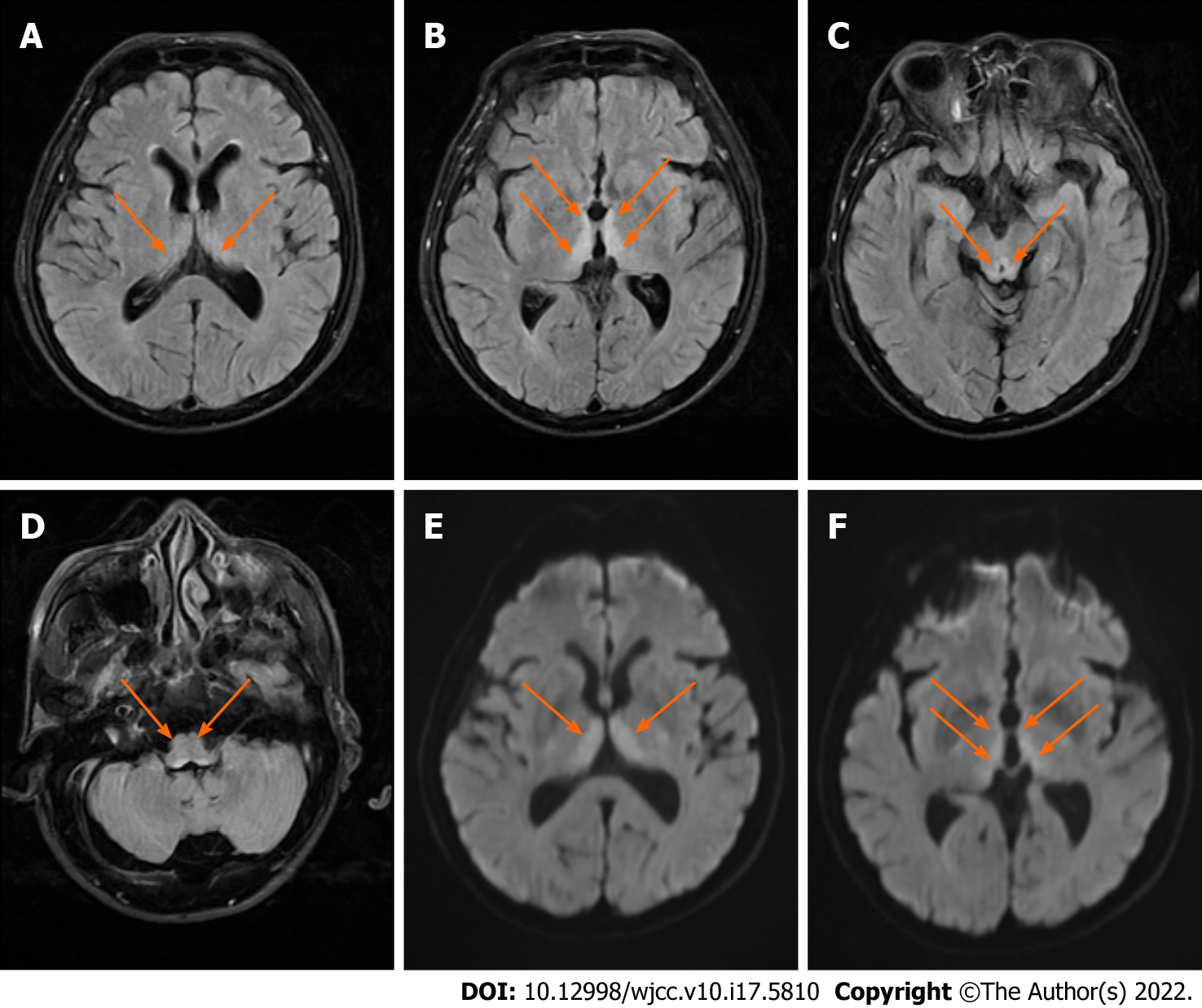 At first, the signs and symptoms rendered cerebrovascular disease or metastatic brain tumors as the most probable diagnosis. However, after combining the clinical manifestations and typical brain MRI findings, a final diagnosis of Wernicke encephalopathy secondary to thiamine deficiency was made.

We started immediate intravenous thiamine replacement therapy at a dose of 500 mg/d for 3 d, followed by 200 mg for a week, and one tablet of 100 mg oral thiamine per day.

The patient regained consciousness within 3 d. After 5 d, his mental status improved, and he could understand simple commands. At discharge, the patient’s neurological symptoms were improved significantly. Neurological examination at the 2-mo follow-up was normal, except for mild memory impairment.

Thiamine cannot be synthesized in the human body, and hence is mainly derived from food. Therefore, any kind of malnutrition lasting for more than 3-4 wk depletes the thiamine reserve[11]. Esophageal cancer is often accompanied by malnutrition due to dysphagia and declined appetite. The potential for subclinical thiamine deficiency should be considered despite the absence of changes in the mental state[12].

In patients with cancer, Wernicke encephalopathy can occur after surgery, during chemotherapy, or at the end of life. It is extremely rare in patients receiving radiotherapy based on existing reports, and there is no guidance on whether radiotherapy can accelerate thiamine deficiency. It needs to be confirmed by more studies in the future. We concluded that chronic malnutrition caused by repeated dysphagia and vomiting was the main reason for Wernicke encephalopathy in our patient. Therefore, a total nutritional evaluation and prophylactic thiamine supplementation are major preventative and therapeutic measures for impaired dietary intake in non-surgical esophageal cancer patients from the time of diagnosis, especially before radiotherapy.

MRI is currently considered the most valuable method for the diagnosis of non-alcoholic Wernicke encephalopathy, especially the FLAIR sequence which has a 93% specificity[14]. The common MRI findings for non- alcoholic Wernicke encephalopathy are hyperintense signals in the dorsal medial thalamic nuclei, periaqueductal gray area, and the third or fourth ventricles as seen on DWI, T2-weighted imaging, and FLAIR sequence[1,11,15,16]. In our patient, there were no obvious abnormalities on CT, but typical findings were detected on MRI, similar to that in current literature reports. Therefore, it is important to detect Wernicke encephalopathy in the early stages of the disease using MRI, since CT has a low sensitivity in the acute phase. Wernicke encephalopathy should be considered as one of the common differential diagnoses when patients develop unexplained altered mental status during radiotherapy while admitted to the Department of Oncology.

Thiamine plays a major role in glucose metabolism. The administration of glucose may thus accelerate the consumption of thiamine and hasten the onset of Wernicke encephalopathy. Our patient received no thiamine, but received continuous glucose solutions as a part of his parenteral nutrition supplement, which is consistent with that reported in the literature[17-19]. Therefore, glucose should be used with caution.

Once a diagnosis of Wernicke encephalopathy is suspected, it is advisable to administer thiamine as early as possible to prevent permanent neurological damage[20]. Although there are no published guidelines for the treatment of Wernicke encephalopathy in non-alcoholics patients, intravenous thiamine supplementation in the acute stage is currently recommended. Several researchers recommend that patients be treated with a high-dose thiamine regimen, consisting of 500 mg thiamine every 8 h intravenously for at least 2-3 d, followed by 250 mg thiamine once a day intravenously for 5 d[21]. In our patient, there was significant improvement in his mental state, but mild cognitive impairment remained due to the late diagnosis of the condition. Therefore, our objective in reporting this case is to emphasize the importance of early nutritional evaluation and diagnosis, so that lasting neurological sequelae can be avoided in patients with Wernicke encephalopathy.