Hepatic artery aneurysm (HAA) is the second most common visceral aneurysm. A significant number of hepatic aneurysms are found accidentally on examination. However, their natural history is characterized by their propensity to rupture, which is very serious and requires urgent treatment. An emergent giant hepatic aneurysm with an abdominal aortic dissection is less commonly reported.

We report the complicated case of a giant hepatic aneurysm with an abdominal aortic dissection. A 66-year-old female presented with the complaint of sudden upper abdominal pain accompanied by vomiting. Physical examination showed that her blood pressure was 214/113 mmHg. Her other vital signs were stable. Computed tomography found a giant hepatic proper aneurysm and dissection of the lower segment of the abdominal aorta. Furthermore, angiography showed a HAA with the maximum diameter of approximately 56 mm originating from the proper hepatic artery and located approximately 15 mm from the involved bifurcation of the left and right hepatic arteries with no collateral circulation. Therefore, we decided to use a stent to isolate the abdominal aortic dissection first, and then performed open repair. After the operation, the patient recovered well without complications, and her 3-month follow-up checkup did not reveal any late complications.

Open surgery is a proven method for treating giant hepatic aneurysms. If the patient's condition is complex, staged surgery is an option.

Core Tip: We report a relatively rare case of a giant hepatic aneurysm combined with abdominal aortic coarctation. The patient had an acute onset and was treated for abdominal aortic coarctation after blood pressure control, followed by a second stage open surgery to manage the hepatic aneurysm in a comprehensive manner. The patient's prognosis is good.

Hepatic artery aneurysm (HAA) is the second most common visceral aneurysm[1]. The incidence rate of HAA in 2091965 patients who visited the Mayo Clinic between 1980 and 1986 was 0.002%[2]. A total of 77% HAAs are isolated in the proximal part of the liver, of which 20% are combined with parenchymal and extraparenchymal invasion and 3% are confined to the liver[3]. Excluding traumatic aneurysms, patients most commonly suffer from HAAs during their sixth decade of life[4]. Lesions in the hepatic circulation show a ratio of approximately 3:2 in terms of sex with male predominance[2]. Risk factors for HAA include atherosclerosis, medial degeneration, infection, trauma, and vasculitis[4]. A large majority of HAAs are diagnosed incidentally via computed tomography (CT) scan[3]. Most patients with symptomatic aneurysms present with one or more of Quincke's classic triad of biliary bleeding (jaundice, biliary colic, and gastrointestinal bleeding)[4]. Diagnosis can be made by ultrasound scan, CT angiography (CTA), and digital subtraction angiography. CTA is recommended as the diagnostic tool of choice in patients who are thought to have HAA[5]. Despite recent advances in therapeutic techniques and diagnostic tools, the management of a visceral artery aneurysm remains clinically challenging. Rupture is the most emergent and life-threatening situation in HAA. Lumsden et al[4] pointed out that the HAA-related early incidence of rupture and mortality was 9.1% and 22.7%, respectively. Fibromuscular dysplasia and polyarteritis nodosa increase the risk of HAA rupture and account for 50% of HAA ruptures[5]. The majority of these lesions rupture when they are > 2 cm in diameter[3].

The guideline, named “the Society for Vascular Surgery clinical practice guidelines on the management of visceral aneurysms”, states that all hepatic artery pseudoaneurysms regardless of cause (Grade 1A) and all symptomatic HAAs regardless of size (Grade 1A) should be repaired as soon as possible; in asymptomatic patients without significant comorbidity, repair is recommended if the true HAA is > 2 cm (Grade 1A) or if the aneurysm enlarges at the rate of > 0.5 cm per year (Grade 1C); in patients with significant comorbidities, repair is recommended if the HAA is > 5.0 cm (Grade 1B); furthermore, the repair of HAA in patients with vasculopathy or vasculitis regardless of size (Grade 1C) or with positive blood cultures (Grade 1C) is recommended[5]. The clinical practice guidelines on the management of visceral aneurysms set by the Society for Vascular Surgery indicate that treatment approaches mainly include endovascular repair with covered stents, open repair, and coil embolization. The endovascular approach represents a minimally-invasive alternative with low mortality and morbidity[6]. Given the abundant collateral supply of the liver, the incidence of hepatic necrosis after disruption of the common hepatic artery is low. Percutaneous embolization is of special value in patients with intrahepatic aneurysms[5]. Endovascular therapy has become the mainstream approach. However, open repair remains a therapeutic option with definite efficacy and is mostly chosen under the conditions of HAA rupture, infeasible endovascular approach and for symptomatic patients with fibromuscular dysplasia or polyarteritis nodosa and lesions in the proper hepatic and proximal right or left hepatic branches[5].

A 66-year-old woman was admitted to our hospital with the chief complaint of severe abdominal pain with vomiting. Four hours before admission, the patient had a sudden onset of sharp pain in the upper and middle abdomen with no obvious cause. The pain was unbearable and persistent without relief, which involved back pain and was accompanied by vomiting the contents of the stomach, without dizziness, headache, chest tightness, chest pain, acid reflux, heartburn, chills, fever and other symptoms.

The patient was found to have hypertension for more than 20 years, with the highest blood pressure reaching 220/160 mmHg. She was taking nimodipine tablets (30 mg tid) regularly, and her blood pressure was controlled at approximately 140/75 mmHg, usually without dizziness and headache.

The patient had no other previous illnesses.

Her personal and family history was unremarkable.

Physical examination showed slight tenderness in the upper abdomen and no rebound pain; blood pressure of 214/139 mmHg; pulse of 64 beats/min; and temperature of 36.4ºC.

CT revealed: (1) A giant aneurysm of the proper hepatic artery (maximum diameter approximately 56 mm); and (2) Dissection of the lower abdominal aorta (single break) (Figure 1A and B).

After receiving blood pressure control, sedation and related symptomatic treatment from the coronary heart disease center of our cardiology department, the patient's symptoms disappeared and her vital signs stabilized. The patient was transferred to our department on the same day of admission due to CT findings of abdominal aortic coarctation and a hepatic aneurysm. We performed angiography, which showed that the HAA had a maximum diameter of approximately 5.6 cm and that it originated from the proper hepatic artery and was located approximately 1.5 cm from the involved bifurcation of the left and right hepatic arteries with no collaterals. Prolonged angiography revealed no communication between the HAA and superior mesenteric artery (Figure 1C). Considering the complexity of the patient's condition, the aortic dissection was repaired with a Endurant II stent graft (Medtronic, Inc.) at the first stage, and the HAA was scheduled for surgical repair at the second stage. Postoperatively, the patient was treated with antiplatelet, lipid-lowering and blood pressure control therapy.

Postoperatively, the patient experienced no specific discomfort. Antiplatelet, blood pressure control, and lipid-lowering treatments were maintained. Eleven days later, the patient was successfully discharged without surgery-related complications. The important times and events during the patient's hospitalization are shown in Table 1. The patient’s 3-mo follow-up checkup did not reveal any late complications (Figure 3). She reported no specific discomfort on review and was very satisfied with her treatment. 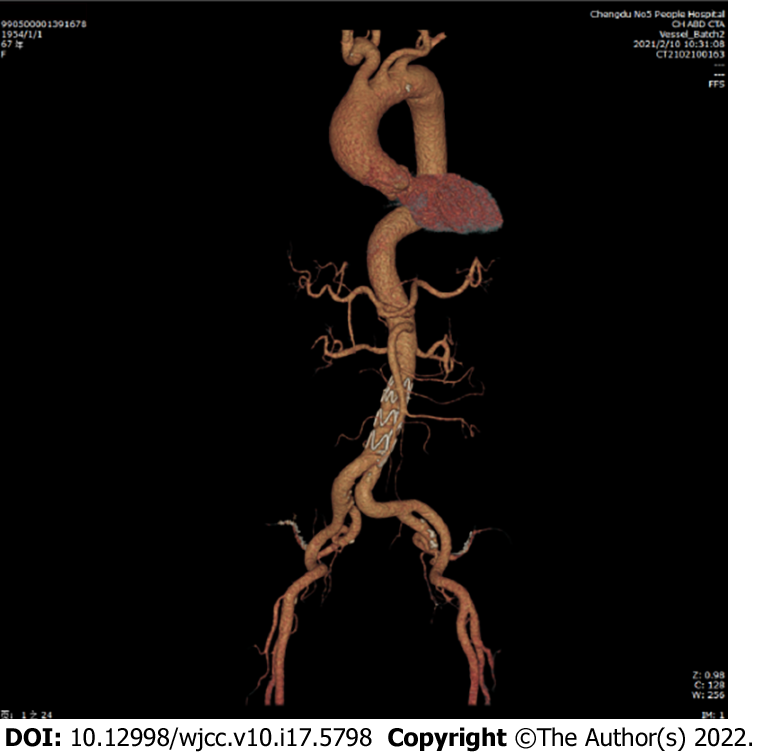 Figure 3 The patient was reexamined 3 mo after surgery and showed no complications. The anastomotic end of the proper hepatic artery was unobstructed. The abdominal aortic dissection was well isolated.
DISCUSSION

Visceral aneurysms, despite their rare incidence of 0.01%-0.2%, are of clinical importance, especially if we consider their natural history which is characterized by their propensity to rupture, with HAA accounting for approximately 20% of visceral aneurysms and a rupture rate of 44%[5]. They are usually asymptomatic and difficult to detect until they rupture and cause abdominal pain and hypovolemic shock. As a result, most visceral aneurysms are found incidentally. The mortality rate following ruptured visceral aneurysms remains high (30% reported in the last decade)[7].

In this case, we did not select coil embolization mainly for the following reasons: First, the endovascular repair of extrahepatic HAA depends on the collaterals and location of the HAA. Given that the maintenance of distal organ perfusion is important, embolization is usually discouraged in patients with HAAs in the proper hepatic artery due to the risk of liver ischemia[5]. Furthermore, in this case, the location of the HAA in the proper hepatic artery involved the bifurcation of the left and right hepatic arteries with no collateral circulation and thus increased the risk. Second, the HAA was so large that a large parenchymal lesion would be created if we performed embolization; this lesion might compress the biliary tract and duodenum and thus cause jaundice, gastrointestinal obstruction, and even duodenum fistula[5,9].

Open surgery, which is usually known as open surgical revascularization, is another common method for the treatment of HAA. Considering the possibility of central liver necrosis despite adequate collateral flow by endovascular exclusion, open repair is recommended in low-risk patients if endovascular stent graft exclusion is not possible[5]. In addition, open surgery has its unique role in aneurysm rupture.

The main methods of vascular reconstruction include direct vascular anastomosis and bypass of the artificial vascular or saphenous vein and vascular patch[11]. The main complications of open surgical revascularization are infection and occlusion. Erben et al[11] reported that in open surgical revascularization, the incidence of occlusion is 12%, with saphenous veins and artificial vessels sharing 6% and 6% equally, and the incidence of infection is 6%.

Diagnosing huge hepatic aneurysms in time and choosing the best treatment are very challenging. When other serious diseases, such as Stanford type B aortic dissection, are found at the same time, the complexity of the patient's condition and the difficulty of treatment double. Although endovascular therapy is the first choice in most cases, open surgery still has a unique role. We should not only strictly understand the indications of various surgical procedures, but also make clinical decisions in accordance with the specific conditions of patients.