The brain is the most important organ to maintain life. However, the amount of brain tissue required for maintaining life in humans has not been previously reported.

A 33-year-old woman fell from the third floor three months before admission to our department. She received a decompressive craniectomy soon after injury. After the operation, operative incision disunion occurred due to the high pressure. Brain tissue flowed from the incision, and intracranial infection occurred. She fell into deep coma and was sent to our hospital. Her right temporal surgical incision was not healed and had a cranial defect of 10 cm × 10 cm. Her intracranial cavity was observed from the skull defect, and the brain tissue was largely lost. In addition, no brain tissue was observed by visual inspection. Cranial computed tomography showed that only a small amount of brain tissue density shadow was compressed in the cerebellum and brainstem. Four days after hospitalization in our hospital, her parents transferred her to a hospital near her hometown. The patient died six days after discharge from our hospital.

This rare case provides some proof of the importance of the brainstem in the maintenance of cardiac rhythm and vascular tension. Neurosurgeons should carefully protect brainstem neurons during operations. Clinicians can maintain the cardiac rhythm of patients who lose their major brain tissue with modern technology, but the family of the patients should be aware of death and end-life care.

Core Tip: A woman got traumatic brain injury and received decompressive craniectomy. Incision disunion and intracranial infection happened after operation, mass brain tissue flowed out from incision. The patient was in deep coma and need ventilator support, her cardiac rhythm was roughly normal. No brain tissue could be seen from cranial defect. The computed tomography showed only very few brain tissue density shadow compressed in the cerebellum and brain stem, none in rest of the cranial cavity. She died a few days later. This rare case provided us some clues that cardiac rhythm and vascular tension can be maintained with very few brain tissue.

The brain not only produces consciousness but also regulates other organ functions by the nervous reflex and neuroendocrine system, which makes the brain a key organ for maintaining life. Brain death is permanent loss of whole brain function, including a comatose state with irreversible and complete loss of brainstem reflexes[1]. As the circulatory center is in the lower brain stem[2], patients with brain death can maintain spontaneous cardiac rhythm and blood perfusion. To date, no report of the amount of brain tissue required for maintaining life has been published. Here, we report a case of extensive brain tissue loss and explore the amount of brain tissue necessary for maintenance of life in a human body.

A 33-year-old woman fell from the third floor to attempt suicide three months before and received a decompressive craniectomy. She came to our department in a comatose state, and her vital signs were unstable.

After the patient was wounded, she lost consciousness immediately and was sent to the emergency room of a nearby hospital. By the time came to that hospital, she was in deep coma and the Glascow score (GCS) was 3, her bilateral mydriasis was fixed, the light reflex was disappeared .She was diagnosed as severe open craniocerebral injury, traumatic subarachnoid hemorrhage and occipital fracture. The patient received a decompressive craniectomy several hours after being wounded. She was transfer to intensive care unit (ICU) after surgery, remained in deep coma and GCS was 3. Several days after the operation, the intracranial pressure increased significantly, and operative incision disunion occurred due to the high pressure. Brain tissue flowed from the incision, and intracranial infection occurred. The doctors cleaned infectious brain tissue gradually from the incision leakage. The patient had diabetes insipidus treated with continuous intravenous use of antidiuretic hormone. And vasopressor was needed to maintain normal blood pressure. Three months after the trauma, she was transferred to our hospital to receive further treatment. The transfer path was from the city of Zhengzhou to Beijing with a distance of over 700 km by highway, and the transport vehicle was an ambulance equipped with a ventilator and microbump.

She was healthy before being injured.

She and her family has no specific history.

Her body temperature was 36.5 °C, and her pulse was 79 beats/min. She had no spontaneous breathing, and the ventilator-controlled breath rate was 18 breaths/min through a tracheostomy cannula. Her blood pressure was maintained at 125/75 mmHg by continuous bumping with 10 µg/kg/min dopamine. The oxygen saturation monitoring was 100%. She was in deep coma, and the GCS was 3 (E1V1M1). She was mydriasis and had no pupillary light reflex. The right temporal surgical incision was not healed and had a cranial defect of 10 cm × 10 cm. There was a small amount of purulent secretion exuded from the incision surface. The intracranial cavity was observed from the skull defect, and the brain tissue was largely lost. In addition, no brain tissue was observed by visual inspection (Figure 1). 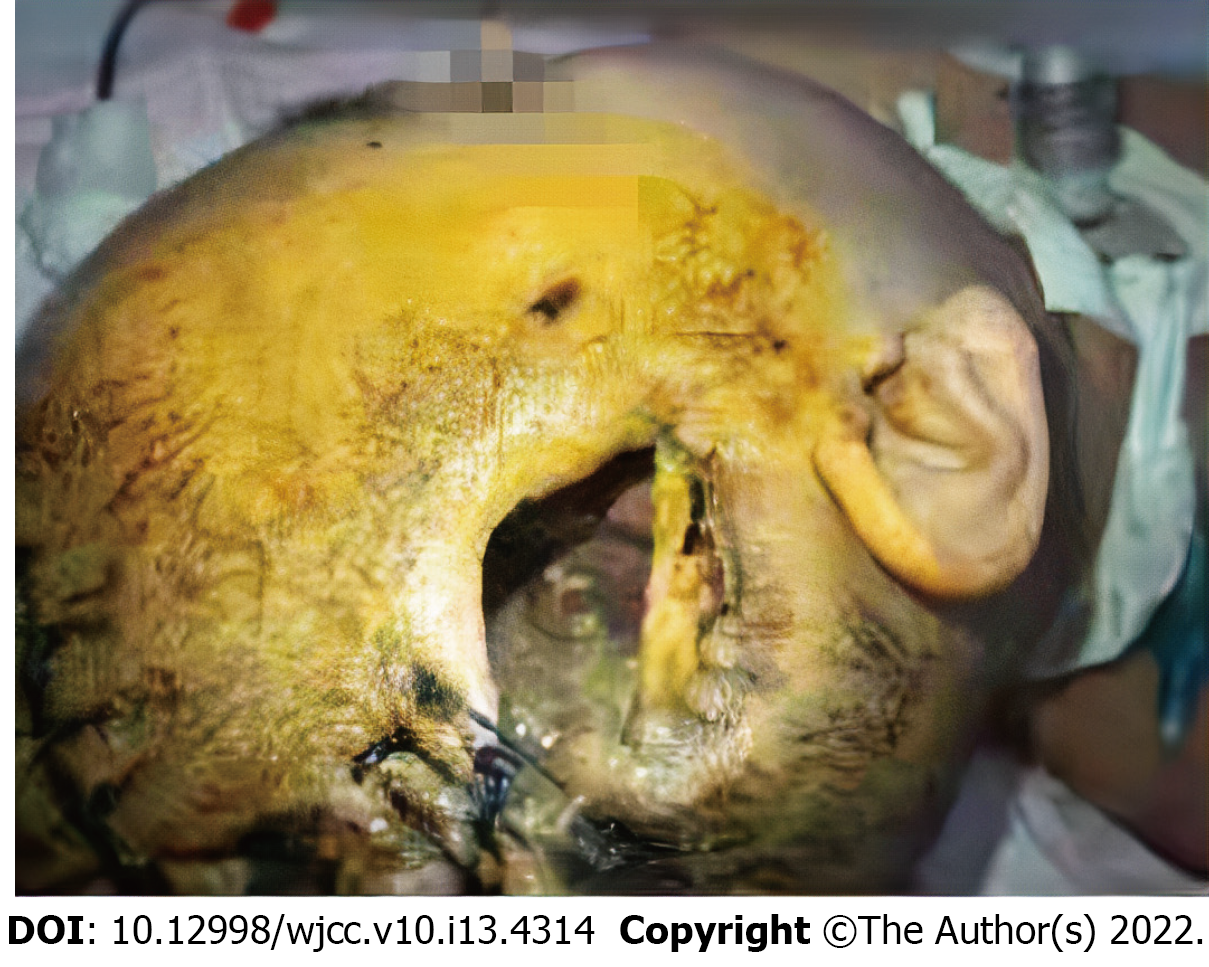 The ECG report was normal with a heart rate of 79 beats/min and a sinus rhythm (Figure 2). 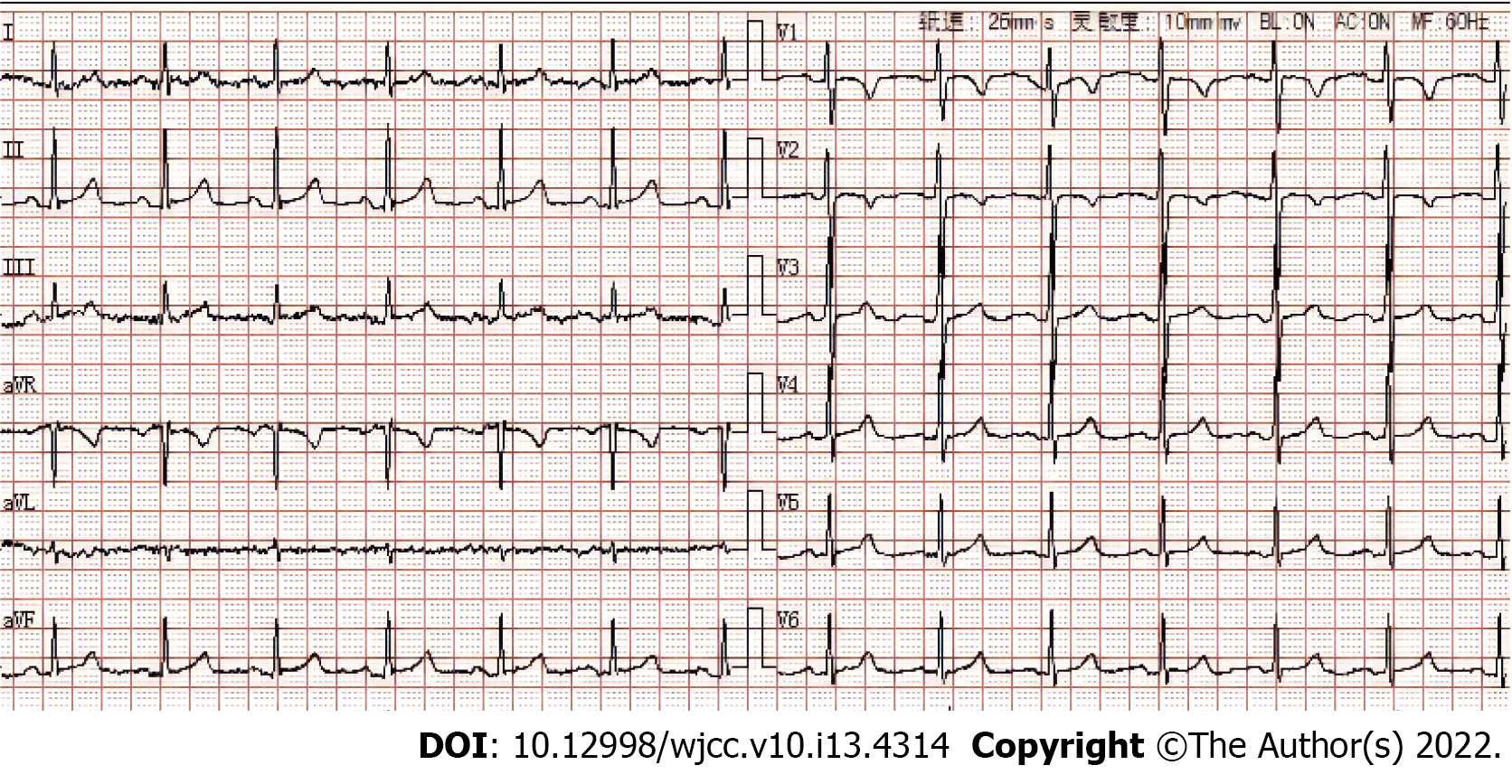 Cranial CT indicated postoperative changes of the right craniectomy. A large amount of gas was visualized in the intracranial and paranasal sinuses, and only a small amount of brain tissue density shadow was compressed in the cerebellum and brainstem. Moreover, the sulcus, fissure, cistern, ventricle, inferior mourning, and midline structures were not shown (Figure 3). 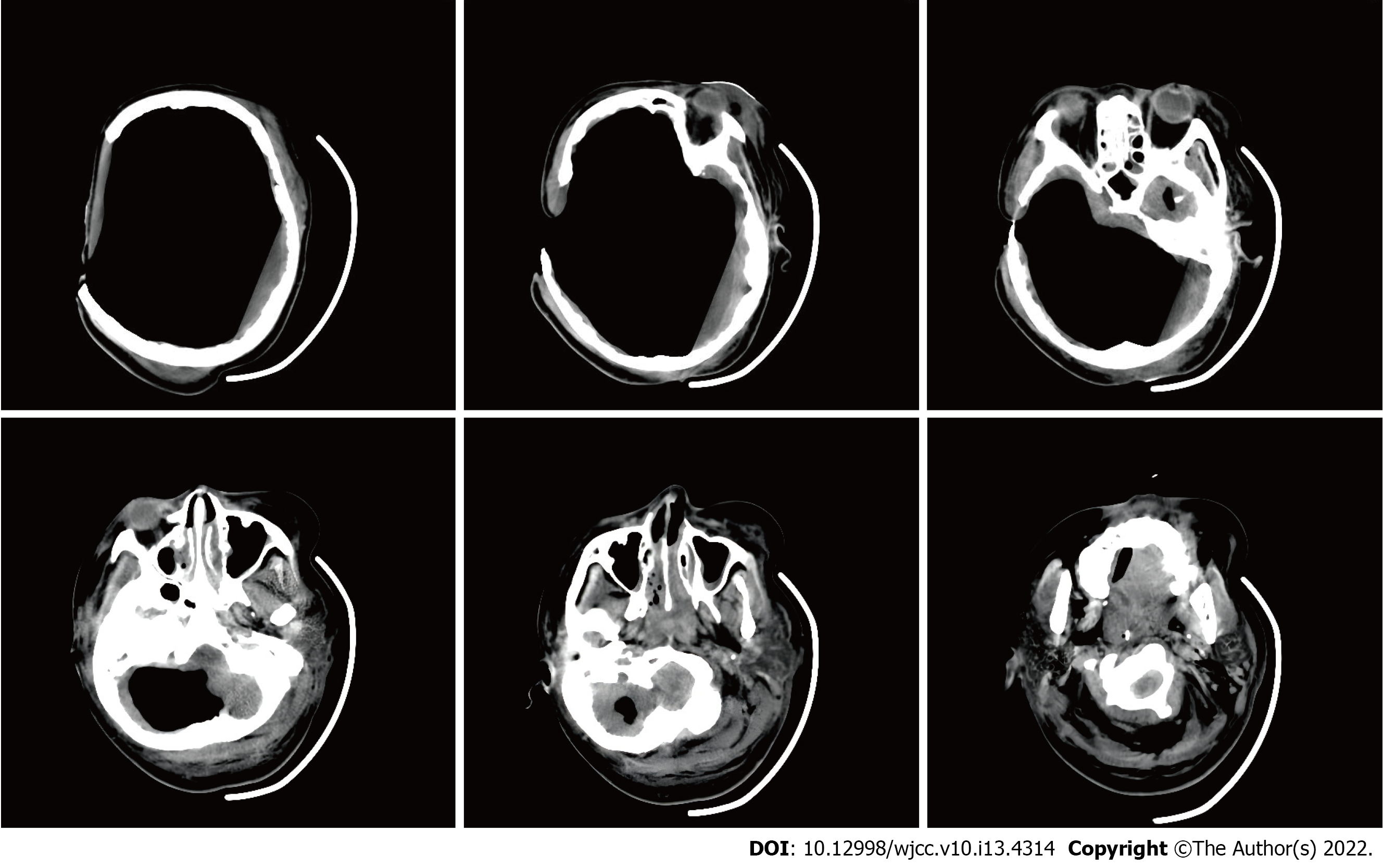 Figure 3 Cranial computed tomography. A large amount of gas was visualized in the intracranial and paranasal sinuses, and only a small amount of brain tissue density shadow was compressed in the cerebellum and brainstem. Moreover, the sulcus, fissure, cistern, ventricle, inferior mourning, and midline structures were not shown.
FINAL DIAGNOSIS

The patient received mechanical ventilation-controlled breath, and the blood oxygen saturation was 100%. Blood pressure was maintained in the normal range by continuous bumping of vasopressors. The patient had central diabetes insipidus from previous hospitalization, and it was treated with continuous intravenous use of antidiuretic hormone. Her daily urine output was 1600-2500 mL, and her urine specific gravity was in the normal range. During the wound dressing change, forced long handles were probed into the right bone defect, which directly touched the left skull wall. Without further exploration, only the surface-infected tissue was removed. The patient remained in a deep coma. The parents hold a Chinese traditional concept of one must die and bury in their hometown. Considering that death was irreversible, they requested autodischarge and return to their hometown.

Four days after hospitalization, the parents decided on autodischarge. The patient was transferred to a hospital in her hometown 600 km from our hospital by an ambulance. She died in that hospital six days after discharge from our department. Time line is showed on Figure 4. 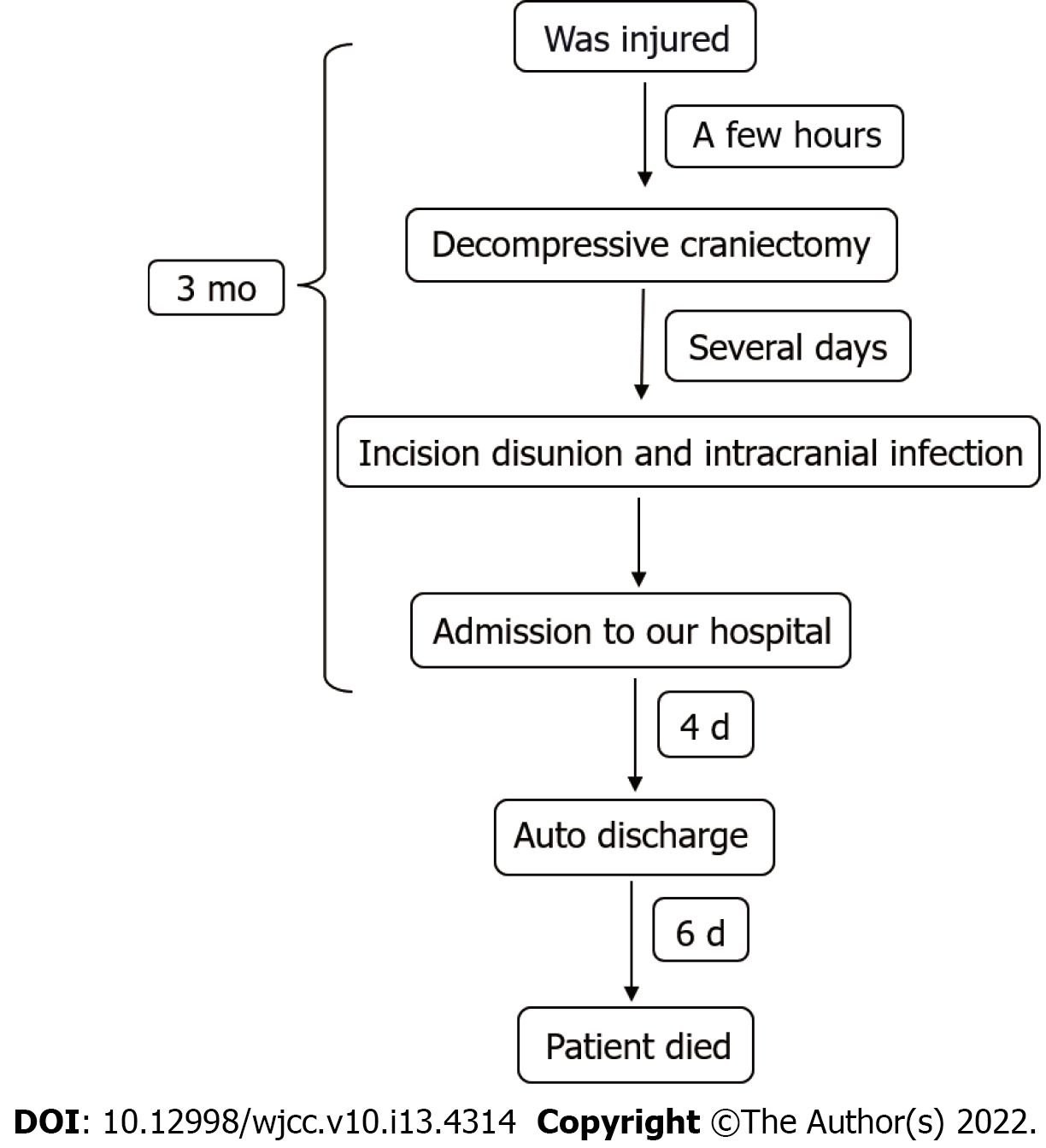 It remains unclear how much brain tissue is essential for a human’s life. Several cases have reported that patients with extensive loss of brain tissue can have sensorimotor and cognitive preservation[3-5]. One of these cases was a white collar worker whose brain only had a thin cortical mantle due to noncommunicating hydrocephalus, but he lived a normal life[3]. In our case, we first reported that the patient lost all brain tissue above the brainstem. This patient lost consciousness but maintained cardiac rhythm. Thus, our report demonstrated the importance of the brainstem in cardiac vascular regulation. The cardiac vascular center is located in the rostral ventral lateral medulla[6]. The medulla structure of this patient was intact through imaging by which the autonomic cardiac rhythm remained. Unlike the cardiac rhythm which is produced by a homogeneous population of pacemaker cells, respiratory rhythm is generated and modulated from various sites in the lower brainstem[7]. The respiratory rhythm related nucleus disparately distributed throughout the pons, medulla, and spinal cord[7,8]. This made spontaneous respiratory, which was vulnerable by damage on any of these positions. A research among patients receiving medulloblastoma resection has reported that, up to 26% of these cases needed postoperative tracheostomy for mechanical ventilation, brainstem compression is the major risk factor related to tracheostomy[9]. Our case reminds neurosurgeons to carefully protect brainstem function during surgery. For example, patients with medullary oblongata germinoma undergo tumor debulk surgery sequences with radiotherapy and chemotherapy, which is a reasonable strategy and can avoid excessive neuronal destruction in the brainstem[10].

The patient in the present case report had already succumbed to brain death, but her parents refused conservative care or organ donation. The maintenance of brain death is mostly considered meaningless to doctors. The view of end-of-life care differs significantly between Asian and Western countries[11]. In traditional Chinese culture-influenced countries, withdrawing treatment from an end-of-life person is considered a cultural taboo[12]. According to a survey made in ICU, among three eastern countries including China, Japan and South Korea, Chinese were least likely to apply do-not-resuscitate orders[13]. However, this situation has changed in China in recent years; one reason is the development of organ donation in China. Chinese media has broadcasted propaganda to set a correct view of brain death and organ donation. By 2019, China had become the second-largest donor country in the world[14]. However, many Chinese refuse to accept organ donation due to traditional beliefs, and some Chinese believe an afterlife and hold a mind that the body must maintain integrity after death[15]. Additional measures should be taken to promote favorable attitudes and willingness toward organ donation in China.

This patient received a decompressive craniectomy after wounding. We speculated that severe intracranial hypertension occurred. Monitoring and treatment of intracranial pressure (ICP) is a mainstay of the care of the patients with the most severe brain injuries. The guideline recommended management of severe traumatic brain injury patients using information from ICP monitoring[16]. This patient didn’t receive ICP monitoring for some unknown reason. The loss of mass brain tissue lowered the intracranial pressure and avoided a mortal cerebral hernia. Prophylactic brain lobectomy achieved the same result. This is an aggressive procedure for severe intracranial hypertension for years, but the efficiency is still disputed[17,18]. The general surgical position is frontal lobectomy and temporal lobectomy for the protection of brain function[19,20]. Our case proved internal decompression might help in maintain life of extremely severe intracranial hypertension patient after traumatic brain injury.

The present report had two shortcomings. First, the patient was treated in other hospitals for three months after injury. We have tried our best to get a complete medical record of other hospitals but still some information were missing including imaging data at the time of initial injury . Second, the patient was too critical to receive more examinations, including magnetic resonance, electroencephalogram, and evoked potential examinations.

This rare case provides some proof of the importance of the brainstem in the maintenance of cardiac rhythm and vascular tension. Neurosurgeons should carefully protect brainstem neurons during operations. Clinicians can maintain the cardiac rhythm of patients who lose their major brain tissue with modern technology, but the family of the patients should be aware of death and end-life care.