Hypertrophic neuropathy of the cauda equina (HNCE) is a rare disease, especially in children. It can be caused by different etiological agents such as inflammation, tumor or hereditary factors. Currently, there is no uniform standard for clinical treatment of HNCE. Furthermore, it is unclear whether spinal canal decompression is beneficial for patients with HNCE.

We report the case of a 13-year-old boy with enlargement of the cauda equina. The onset of the disease began at the age of 6 years and was initially marked by radiating pain in the buttocks and thighs after leaning over and weakness in the lower limbs when climbing a ladder. The child did not receive any medical treatment. As the disease slowly progressed, the child needed the help of others to walk, and he had a trendelenburg gait. He underwent spinal canal decompression and a nerve biopsy during his hospital stay. A diagnosis of chronic inflammatory demyelinating polyradiculoneuropathy was made based on electrophysiological findings and pathological examination results. Immunoglobulin or hormone therapy was recommended during hospitalization, but his mother refused. After discharge, the boy’s mother helped him carry out postoperative rehabilitation training at home. His lower-limb muscle strength gradually increased, and he could stand upright and take steps. Six mo after surgery, the child was readmitted and began immunoglobulin therapy. Long-term oral steroid treatment was initiated after discharge. The movement and sensation of the lower limbs were further improved, and the boy could walk normally 1 year after surgery.

Spinal canal decompression can improve the clinical symptoms of HNCE caused by inflammation, even in children. When combined with specific etiological interventions, spinal cord decompression can lead to optimal outcomes.

Core Tip: The rare case reported here thoroughly illustrates that chronic inflammatory demyelinating polyradiculoneuropathy can result in hypertrophic neuropathy of the cauda equina (HNCE) in children. This case provides new insights into the management of childhood chronic inflammatory demyelinating polyradiculoneuropathy. We demonstrated that laminectomy, followed by adjunct therapy, is a safe and effective treatment of HNCE. At the same time, etiological diagnosis is very important.

Hypertrophic neuropathy (HN) is very uncommon in clinical settings and has been described as a form of hereditary motor and sensory neuropathy or acquired demyelination neuropathy in the literature[1]. It can be characterized as a chronic progressive clinical process that mainly affects the peripheral nerve. HN involving the whole cauda equina is even more uncommon and is exceedingly rarely reported in children. There is no uniform standard for clinical treatment of HN of the cauda equina. We report a case of childhood-onset HN of the cauda equina caused by chronic inflammatory demyelinating polyradiculoneuropathy (CIDP).

A 13-year-old Asian boy presented to our facility with reduced muscular strength of both lower limbs, abnormalities in gait, and paresthesia.

The patient had shown progressive reduced muscular strength of both lower limbs, abnormalities in gait, and paresthesia from 6 years old. He initially presented with radiating pain in the buttocks and thighs after bending over and weakness in both lower limbs when climbing steps. Intermittent symptoms gradually developed into a persistent decline in muscle strength of the lower limbs (particularly in the distal lower extremities) and gait instability.

There was no associated history of trauma.

There was no inherited disorders in the patient’s family history.

The patient’s level of consciousness, neurological physical examination, and upper limb activities were within normal limits. The muscle strength of both lower extremities was grade IV. The patient needed the help of others to walk, and he had a trendelenburg gait. He had numbness after acupuncture below the hip, and hypoalgesia and hypoesthesia were more obvious in the distal extremities. Additional presentation symptoms included bilateral abolished tendon reflexes, extension contracture of the ankles, and restricted toe movement. Other symptoms such as pathological reflexes, incontinence, scoliosis, atrophy of the muscles of the lower extremities, and rashes were not noted.

Magnetic resonance imaging (MRI) of the lumbosacral spine was performed 7 years after symptom onset. The patient underwent MRI with T1- and T2-weighted imaging and T1-contrast-enhanced sequences. Findings demonstrated that diffuse thickening of the cauda equina nerve roots filled the entire spinal canal, even extending to the intervertebral foramen and the paravertebral space (Figure 1). The cauda equina nerve roots also showed a low T1 signal and a slightly higher T2 signal, with mild enhancement. Brain MRI findings were within normal limits. 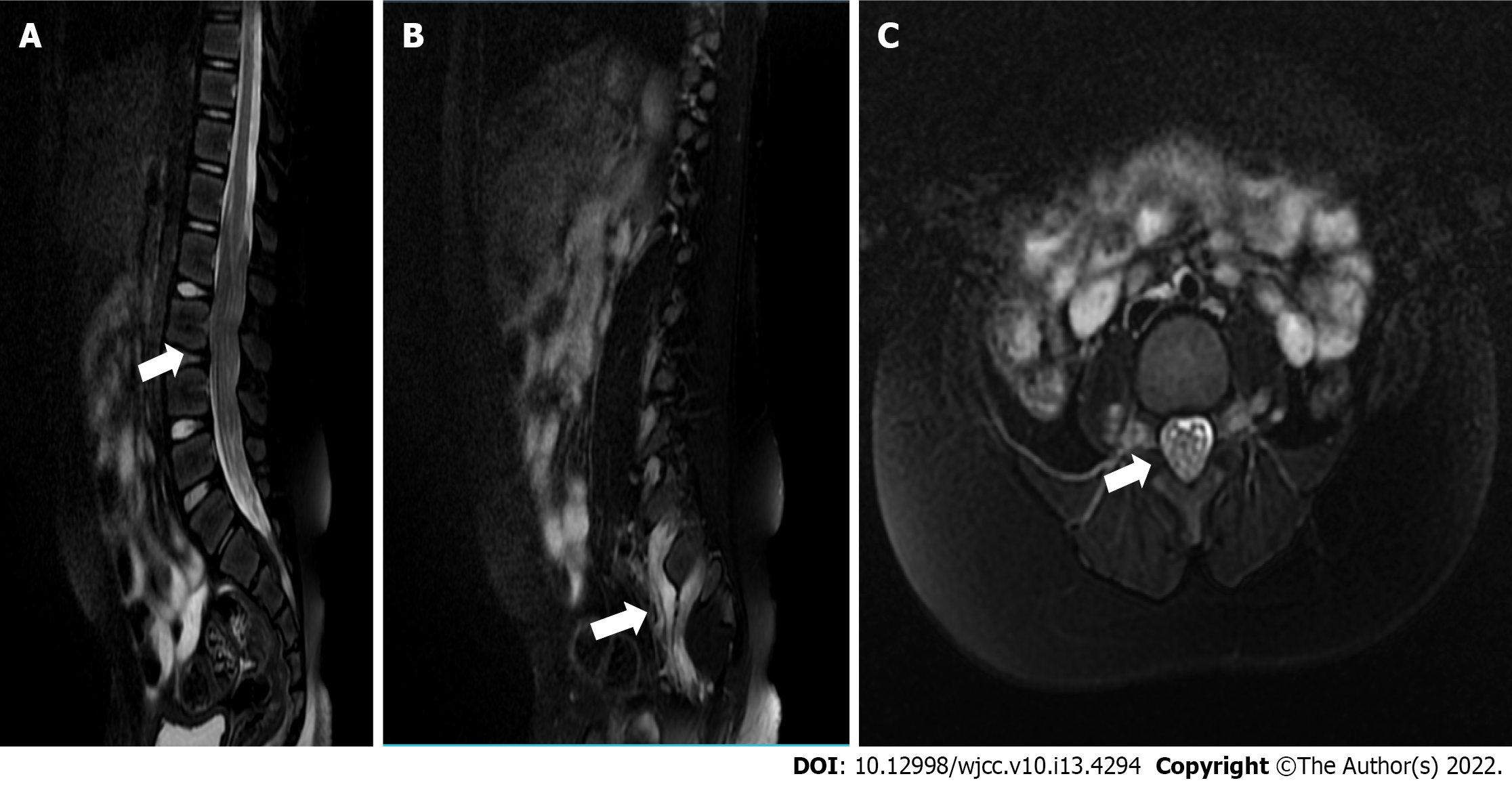 Whole-exome sequencing was performed on deoxyribonucleic acid extracted from the patient’s peripheral blood, with no disease-causing variant identified.

Neuropathological examination demonstrated a remarkable reduction in the density of myelinated fibers and hyperplasia of the schwann cells, forming onion bulb wrappings of myelinated fibers and blood vessels, and a small population of perivascular macrophages. In addition, immunohistochemical analysis showed positivity for the S-100 protein antibody and negativity for epithelial membrane antigen (EMA) (Figure 2). 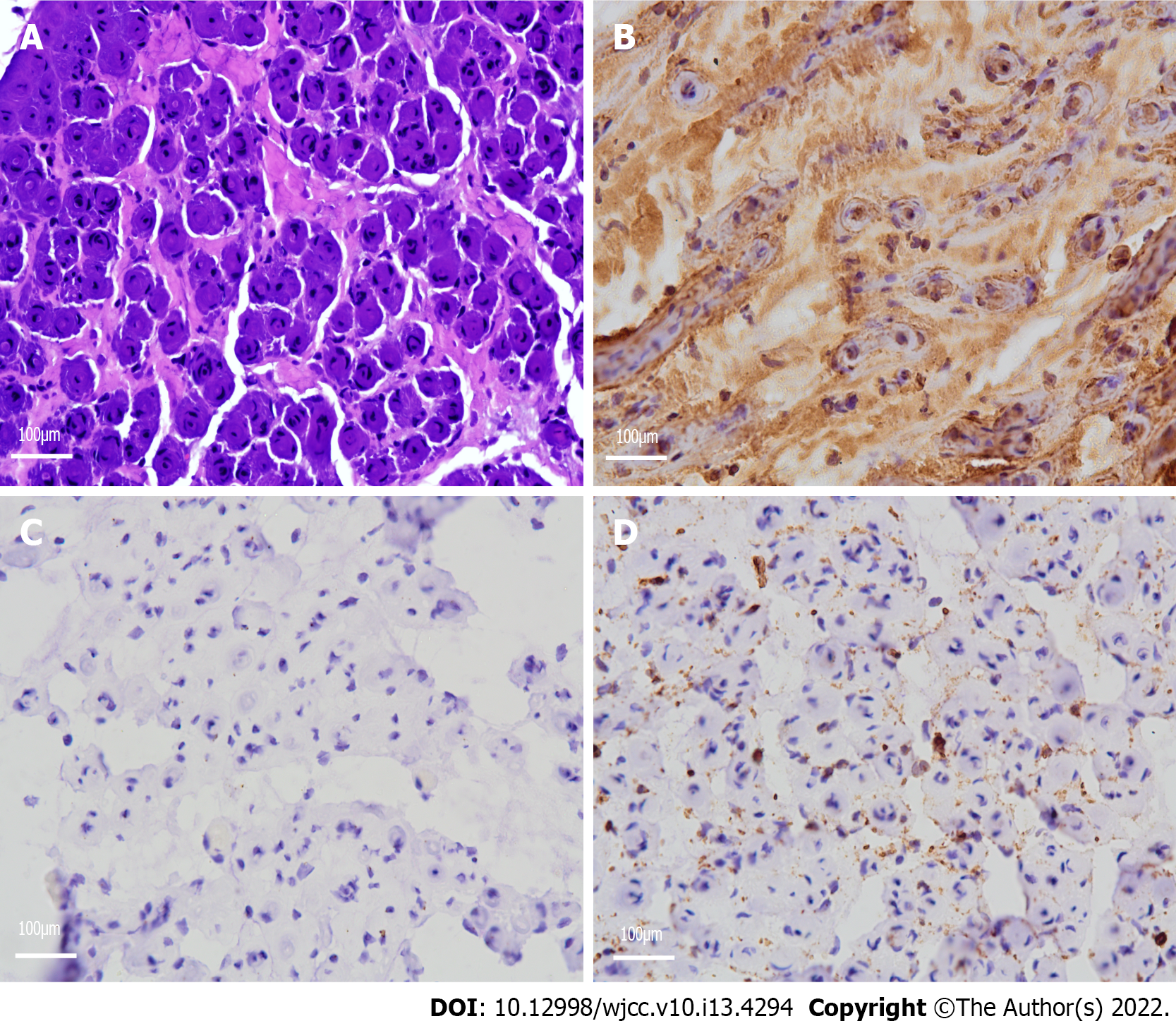 Based on the combination of findings, CIDP was finally diagnosed.

With the consent of his parents, the child underwent spinal canal decompression at vertebrae L1-L5 and biopsy of a nerve root of the cauda equina. The surgical procedure was performed with intraoperative neuromonitoring (motor and somatosensory evoked potentials). The bilateral tibialis anterior muscles, quadriceps femoris, gastrocnemius, and sphincter were selected for electromyography. The spinal dural sac was expanded, the local pressure of the spinal dural sac was increased, and the cauda equina nerve roots were hypertrophic and extruding from the spinal dural opening (Figure 3). A cauda equina nerve root that did not elicit a motor response was selected through nerve stimulation and was surgically resected for pathological examination. We enlarged the spinal dural sac and removed the spinous processes and laminae of L1-L5. The patient recovered well after surgery, and no surgical complications occurred. Early postoperative neurological function remained stable. Immunotherapy and hormone therapy were recommended for the patient, however, his family refused them. 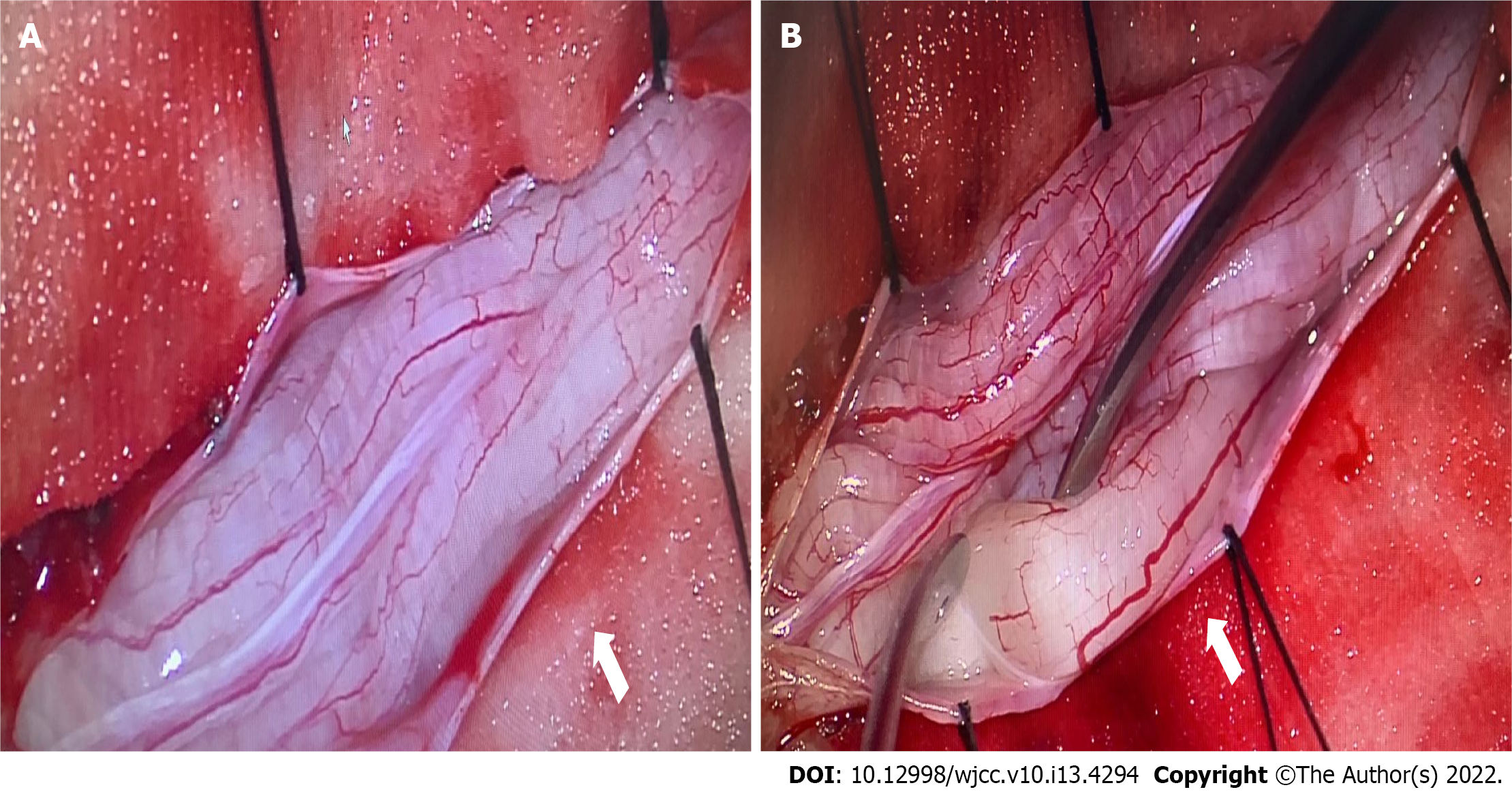 When the patient returned for a follow-up visit 6 mo after the surgery, he could limp, and his walking posture had improved, however, he still complained of numbness in the distal lower limbs. He was re-admitted and administered intravenous immunoglobulin treatment at 6 mo post-surgery, and long-term oral steroid treatment was initiated after discharge. Oral prednisone was initially prescribed at 1 mg/kg/d. After 2 mo, the dosage was gradually reduced to 5 mg/kg/d with 2 wk intervals between doses. The patient continued maintenance therapy using prednisone (10 mg/d) for 1 year. Liver and kidney function and electrolytes were examined regularly during prednisone treatment, but no abnormal results were found. The symptoms further improved by the follow-up visit 1 year after the operation, including near-normal muscle strength of both lower limbs and partial recovery of sensory function. The boy could walk upright independently, however, he still complained of numbness of the distal lower extremities.

CIDP is an immune-mediated peripheral neuropathy characterized by progressive or recurrent sensory and motor dysfunctions[2]. The estimated incidence of CIDP is approximate 0.33 per 100000 population, and the prevalence of CIDP is approximate 2.81 per 100000[3], which is significantly higher than in children, at less than 1 per 2000000[4]. For several years, elements of macrophage-mediated demyelination have been considered as characteristic of immune-mediated peripheral neuropathies[5]. However, macrophages have a positive role in nerve regeneration, as they can remove debris after myelin injury and regulate schwann cell remyelination[6]. Macrophages not only cause myelin destruction, but also promote myelin regeneration, resulting in the characteristic “onion bulb” changes seen in CIDP nerve biopsy specimens. These structures result from redundant schwann cell proliferation, indicating repeated segmental degeneration and regeneration of the myelin sheath and elucidating the mechanism of the extensive proliferation of the peripheral nervous system after injury[7].

HN frequently manifests as thickening of the peripheral nerves, accompanied by neurological dysfunction. It is generally a slowly progressive disease and is rare in children. HN can be caused by a variety of diseases, such as CIDP, intrathecal schwannoma, hereditary motor and sensory neuropathy type I (charcot-marie-tooth disease) and type III (dejerine sottas disease), neurofibromatosis, amyloidosis, lymphoma, and leprosy[8]. Although cranial nerve involvement is rare, it has been reported to affect the trigeminal, oculomotor, facial, and auditory nerves[9-12]. HN of the cauda equina is exceedingly rare and can cause symptoms similar to those of spinal stenosis. Hypertrophic nerve roots occupy and narrow the lumbar spinal canal, resulting in symptoms similar to those of typical lumbar spinal stenosis[13].

The signal abnormality of HN can be observed via B-mode ultrasound and MRI. Hypoechoic masses in B-mode ultrasound images could represent neural edema and acute inflammatory response, while hyperechoic enlargement could indicate fibrosis, onion bulb formation, and remyelination after chronic demyelination[14]. However, B-mode ultrasound is usually more sensitive to isolated peripheral HN. Considering the patient’s clinical symptoms, we initially suspected that the lesion might have been located in the spinal cord, hence, we chose MRI instead of B-mode ultrasound imaging. MRI may demonstrate hypertrophic nerve roots as multifocal and asymmetrical or diffuse. The different patterns of HN likely reflect the unique mechanisms of nerve demyelination of different etiologies[15]. Histopathological sections of hypertrophic nerve caused by CIDP usually display characteristic changes such as “onion bulbs”. Onion bulbs are mainly formed by the proliferation of schwann cells, which are positive for the S-100 protein anti-body[16]. Other diseases that cause hypertrophic nerve roots can present with changes similar to onion bulbs, for example, in the case of intrasheath schwannomas, the proliferation of peripheral nerve cells is the main cause of hypertrophic nerve roots. These cells surround one or more axons and their schwann cell sheaths, therefore, EMA is positive[17]. This distinguishes between perineuroma and schwannoma, as well as inflammatory and acquired polyneuropathy[18]. In this case, the immunohistochemical result exhibited positivity for S-100 proteins, and inflammatory cells were visible under the electron microscope; hence, CIDP was diagnosed. The etiology of HN is crucial and sometimes difficult to diagnose by non-invasive examination. Nerve biopsy examination is a useful method for discriminating between inflammatory and non-inflammatory neurological disorders[19].

Spinal canal decompression can improve sensory and motor functions in HN of the cauda equina caused by inflammation, even in children. Surgery combined with specific etiology intervention is the best way to achieve the optimal outcome.

We are deeply indebted to Professor Yang L who guided us throughout our writing of this report.