Core tip: Characteristic radiologic findings such as calcifications on computed tomography scan and a ring-and-arc pattern on enhanced T1 weighted image were useful in the preoperative diagnosis of low grade chondrosarcoma of the septum. Awareness of radiologic findings of low grade chondrosarcoma can help to make an accurate diagnosis and perform appropriate excision, leading to successful local control.

Chondrosarcoma constitutes approximately 15% of all primary malignant bone tumors. Chondrosarcomas occur most frequently in the long bones, pelvis, and ribs, but rarely occurs in the nasal cavity. Chondrosarcoma of the nasal septum is very rare and is sometimes difficult to suspect on physical examination. However, because differentiating low grade chondrosarcomas from chondromas is also difficult radiologically[1] or histologically[2], accurate diagnosis can be a challenge to physicians. Here, we present a case of low grade chondrosarcoma of the nasal septum with characteristic radiologic findings which was successfully treated with endoscopic surgery.

A 56-year-old woman presented with the left nasal obstruction which was present for 1 mo. On endoscopic examination, the patient was noted to have an obstructing mass in the posterior portion of the left nasal cavity which was originated from the posterior nasal septum (Figure 1). No abnormalities of facial sensation or vision were detected. A computed tomography (CT) scan revealed the presence of approximately a 3 cm sized soft-tissue mass with punctuate calcifications centered on the posterior septum. The mass bowed the medial wall of the left maxillary sinus and extended into the nasopharynx, but there was no bone erosion of the skull base (Figure 2). On magnetic resonance imaging (MRI), a septal mass showed low-intensity on T1-weighted images, high-intensity on T2-weighted images, and heterogenous enhancement with ring-and-arc appearance on enhanced T1-weighted images, suggesting low grade chondrosarcoma (Figure 3). Following this, an intranasal endoscopic biopsy of the septal mass was performed. The histopathologic result showed benign cartilaginous tissue, suggestive of chondroma. With radiologic findings and histologic findings, low grade chondrosarcoma was strongly suspected. The mass was removed endoscopically. Final histopathology was consistent with low-grade chondrosarcoma and the histopathological surgical margin was tumor free. No adjuvant treatment was deemed necessary. The post-operative course was uneventful. At 2 years after the surgery, the patient showed no evidence of recurrence. 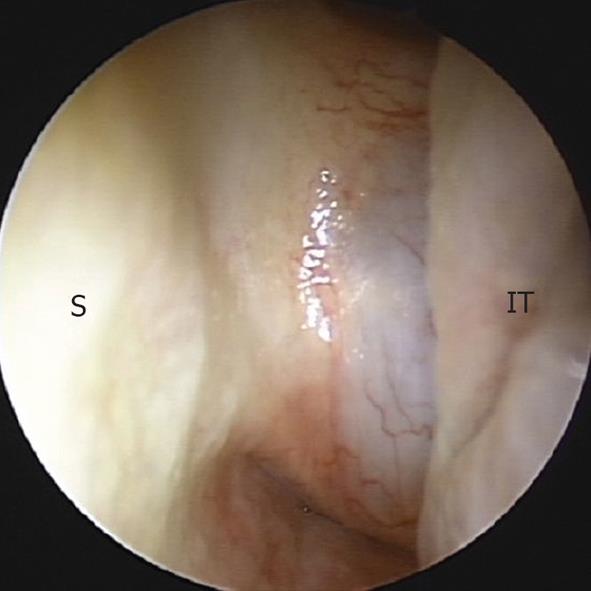 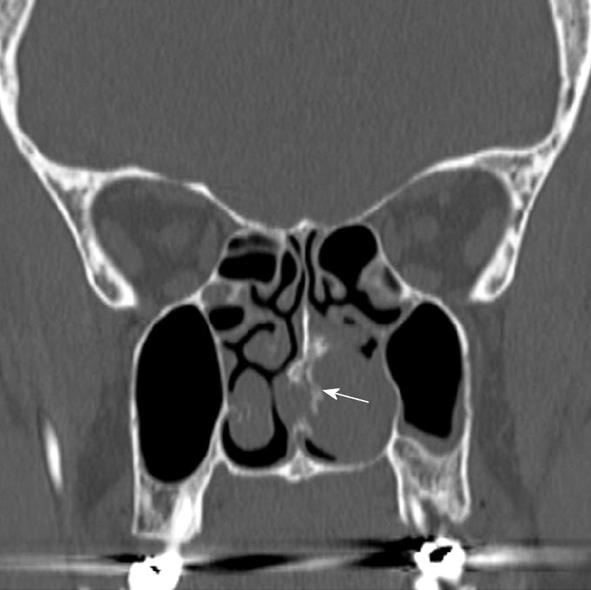 This report was approved by the Institutional Review Board of Chonnam National University Hwasun Hospital.

Presenting symptoms can vary depending on the involvement of adjacent structures by the tumor. Nasal obstruction is the common complaint of patients with chondrosarcoma of the nasal septum. Septal chondrosarcoma can involve the paranasal sinuses, skull base, palate, and/or orbit[4-8].

Chondrosarcomas have a lobulated growth pattern, hypercellularity, and cytologic atypia. They are categorized into three grades, Grades 1, 2, and 3, on the basis of the degree of cellularity, nuclear size and atypia, and mitotic activity. Grade 1 (low grade) tumors display an abundant chondroid matrix with scattered clusters of chondrocytes with near-normal nuclei, no mitotic figures, and occasional binucleation; Grade 2 tumors have a higher degree of cellularity with a less-chondroid matrix, increased mitotic figures, multinucleation, and hyperchromatic vesicular nuclei; Grade 3 tumors are characterized by irregularly shaped chondrocytes in a myxoid matrix, more increased hypercellularity, nuclear pleomorphism, and mitosis than Grades 1 and 2 tumors[9,10]. Histological differential diagnosis includes chondroid differentiation in osteosarcomas, enchondromas, and chondroid chordomas[11]. One of the most difficult challenges involves the distinction between low grade chondrosarcomas and enchondromas at radiology and histology, which often lead to initial misdiagnosis[1,2]. In our case, low grade chondromosarcoma could not be differentiated from chondroma on punch biopsy specimen.

Because chondrosarcomas grow slowly with a lobular pattern of hyaline cartilage matrix and peripheral endochondral ossification and undergo myxoid degeneration and necrosis, these pathological features will produce the appearance of chondrosarcoma on imaging studies. Imaging study is complementary to histology and can be paramount in the diagnosis of low grade chondrosarcomas. Although plain X-ray of the paranasal sinus provides little information, CT and MRI are found to be very helpful. On CT, chondrosarcomas typically appear as lesions composed of hypodense matrix with typical calcifications which may vary from amorphous to punctuate to large. Associated bone erosion or destruction can also be seen in such cases[12]. MRI findings of low grade chondrosarcoma have been shown to be characteristic. Low-grade chondrosarcomas are typically hypo- to isointense on T1WI. On T2WI, marked hyperintensity is shown, which represents the lobular architectures of hyaline cartilage with high water content and the cartilaginous lobules may be surrounded by low-signal-intensity septa which are related to mineralized matrix, marrow, and fibrosis[13,14]. The contrast enhancement pattern after Gadolinium administration shows characteristic peripheral and septal pattern, as shown in our case[12,13,15-17]. This ring-and-arc pattern corresponds to fibrovascular bundles surrounding the cartilaginous lobules and has been known to be suggestive of low grade chondrosarcoma[16,17], although controversial[13].

F-18 fluoro-2-deoxyglucose positron emission tomography (18F-FDG PET) has been reported to help in cartilaginous tumor grading and outcome prediction. When the maximum SUV cutoff of 2.0 was used to distinguish benign and malignant cartilage neoplasms in 26 operated cartilaginous tumors, the sensitivity of 18F-FDG PET was 90.9%, specificity 100%, and accuracy 96.6%[18].

Mainstay of treatment for chondrosarcoma of the nasal septum is wide excision with a cuff of normal tissue. Chondrosarcomas are usually resistant to radiation and chemotherapy because of slow growth of tumors with a relatively low fraction of dividing cells[6,19]. In general, 5-year survival rate ranges from 54% to 81%, when all grades of chondrosarcoma are included[6]. Due to recurrences after long disease-free intervals, lifelong follow-up with imaging studies and endoscopic examination is recommended.