Tumour induced osteomalacia (TIO) is a rare and often unrecognized cause of hypophosphatemia. We report on a case of TIO due to a hemangiopericytoma originating from the left nasal sinus. The patient was a 55-year-old male with a 3-year history of left hip pain and an undisplaced left hip fracture. Biochemical testing demonstrated low levels of serum phosphate and serum 1,25-dihydroxyvitamin D, and an elevated level of fibroblast growth factor 23. Octreotide scanning demonstrated uptake in the left nasal sinus area and a computed tomography scan revealed a left nasal sinus mass. The patient underwent surgical resection of the mass and histology was consistent with a sinonasal hemangiopericytoma. His serum phosphate levels normalized almost immediately after surgery and he had complete resolution of hip pain. Our case highlights the importance of considering TIO when assessing patients with low serum phosphate.

Core tip: Tumour induced osteomalacia (TIO) is a rare and often unrecognized cause of hypophosphatemia. We report on a case of TIO due to a hemangiopericytoma originating from the left nasal sinus. The patient was a 55-year-old male with a 3-year history of left hip pain and an undisplaced left hip fracture. Our case highlights the importance of considering TIO when assessing patients with low serum phosphate.

Tumour induced osteomalacia (TIO) is a rare paraneoplastic syndrome characterized by hypophosphatemia and abnormal vitamin D metabolism. TIO is typically caused by small endocrine tumours that secrete the phosphaturic hormone fibroblast growth factor 23 (FGF23)[1,2]. A lack of awareness among clinicians about the existence of TIO, combined with the fact that once TIO is recognized as a possible diagnosis the instigating tumour may be difficult to locate, means that most patients with TIO can have symptoms for up to 10 years before a definitive diagnosis is made[3,4].

We report here on a 55-year-old Caucasian male who was referred to our osteoporosis clinic in February 2010 due to concerns of ongoing fractures despite bisphosphonate therapy. The patient reported that he was in good health until 2007 when he suffered a left “undisplaced hip fracture” after falling in the bathtub. His primary care practitioner made a diagnosis of osteoporosis and prescribed alendronate 70 mg weekly, vitamin D 800 IU

once daily and calcium citrate 650 mg twice daily. He continued to take these agents up to the time of assessment in our clinic. The patient stated that after his initial fall in 2007 he had at least three more falls, all on the left side, and repeat radiographs demonstrated a persistent undisplaced left hip fracture. After his initial fall in 2007, he developed left sided groin/hip pain aggravated by walking and in 2008 he started using a cane to assist with ambulation. He denied generalized fatigue, weakness, and weight loss, and had no active medical problems. He did not smoke or take glucocorticoids. He did not drink alcohol, but reported that he was a prior binge drinker, consuming 24 drinks per day for 10 years; his last drink was 15 years ago. There was no family history of any bone disease. Physical examination was normal. Specifically, he was a well looking man with normal muscle strength in the upper and lower proximal muscle groups. Bone mineral density (BMD) testing by dual energy X-ray absorptiometry showed a lumbar spine T score of -0.6 (1.147 g/cm2); a right femoral neck T score of -3.4 (0.624 g/cm2) and a right total hip T score of -3.5 (0.638 g/cm2). Laboratory testing revealed persistently low levels of serum phosphate, elevated levels of serum alkaline phosphatase, and serum levels of calcium, creatinine, parathyroid hormone (PTH) and 25(OH) vitamin D that were in the normal range. Further laboratory testing demonstrated low serum 1,25(OH)D levels and an increase in serum FGF23, also unchanged with repeated testing. Tubular reabsorption of phosphate was calculated and found to be decreased (Table 1). Prostate specific antigen testing was negative, serum bicarbonate and urine electrolytes were normal. Radiographs of the right and left femurs revealed Looser’s zones (Figure 1).

The patient was advised to stop the alendronate, and was started on phosphate Sandoz 500 mg bid, rocaltrol 1 mg/d and underwent octreotide scanning which demonstrated nonspecific uptake in the sinus area consistent with sinusitis (Figure 2). On further questioning, the patient reported that he had a longstanding history of “chronic sinusitis” but had not had any specific testing or treatments for this condition. 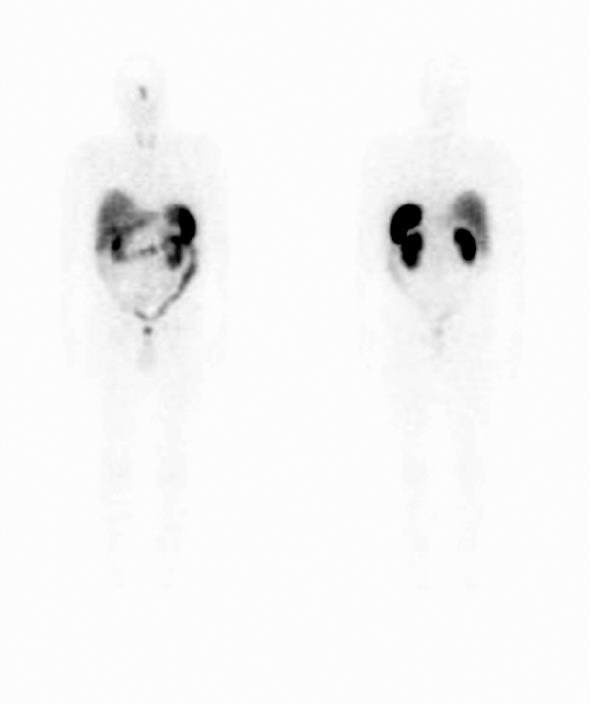 Computed tomography (CT) scan of the sinuses demonstrated a left posterior nasal cavity mass associated with bony remodelling. An open biopsy of the mass revealed a subepithelial neoplasm composed of spindle cells with a fascicular pattern. The cytoplasm was ample and eosinophilic. The nuclei were ovoid with mild atypia and the mitotic activity was not readily identified. Occasional hyalinised blood vessels, some of which contained “stag-horn”-like branching, were noted. Interstitial haemorrhage and hemosiderin deposition were present. There was no evidence of necrosis or significant pleomorphism (Figure 3). Immunohistochemistry revealed expression of BCL-2; however, the tumour was negative for smooth muscle actin, desmin, CD34, S-100, and keratin (AE1/AE3). The patient received neoadjuvant radiation therapy (50 Gy in 25 fractions from September 21 to October 26, 2011) and had the mass surgically resected in December 2011. The resection specimen contained reactive changes compatible with the neoadjuvant therapy effect, but it was otherwise similar to the initial biopsy. There was no evidence of myxochondroid matrix or dystrophic calcification to suggest phosphaturic mesenchymal tumour, mixed connective tissue variant; hence, the findings were most in keeping with a variant of a sinonasal hemangiopericytoma-like tumour. Phosphate Sandoz and rocaltrol were discontinued postoperatively. 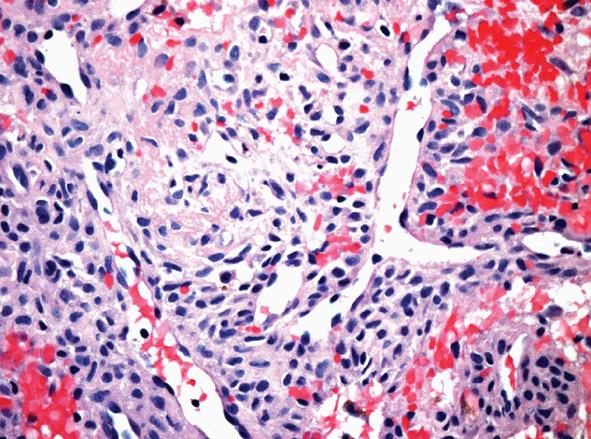 TIO was first recognized as a disease by Prader et al[5] in 1959. Prader et al[5] reported on an 11.5-year-old girl who developed severe rickets over 1 year. Studies of kidney function were normal with the exception of decreased tubular phosphate absorption. Subsequently, a giant cell granuloma was identified on a rib which, when removed, resulted in healing of her rickets. Prader et al[5] suggested that there was likely an unidentified “substance” secreted by the granuloma that resulted in the development of the patient’s rickets and when the tumour was removed the “substance” was also removed, and her rickets resolved. The unidentified substance was most likely a phosphaturic agent - specifically FGF23. Since Prader’s publication, there have been over three hundred cases of TIO reported in the literature, mainly in association with small endocrine tumours that secrete FGF23.

Serum phosphate plays a key role in cell membrane composition, energy metabolism, and bone mineralization. Not surprisingly then, the symptoms of hypophosphatemia in adults can include fatigue, weakness, bone pain and fractures.

Causes of low phosphate levels can be categorized into three major groups: intracellular shifts (the redistribution of phosphorous from extracellular fluid into cells), decreased intestinal absorption and increased urinary excretion. Each of these causes is associated with a long differential diagnosis that has been reviewed in other publications in detail[7-9]. Briefly, intracellular shifts include treatment of diabetic ketoacidosis, refeeding of malnourished patients with anorexia, tumour consumption, sepsis and hungry bone syndrome. Decreased intestinal absorption is most commonly due to vitamin D deficiency or vitamin D resistance. Increased urinary excretion can be due to primary renal transport defects (Faconi syndrome), excess PTH (primary and secondary hyperparathyroidism), excess FGF23 production (from bone or from tumour), production of other phosphaturic proteins from tumours, or overproduction of klotho which is a cofactor required for FGF23 signaling.

FGF23 is an essential regulator of phosphate homeostasis. FGF23 binds to FGF receptor 1c and its coreceptor klotho, and activation of this receptor complex inhibits reabsorption of phosphate by reducing expression of sodium-phosphate transporters in the proximal tubule[10,11]. FGF23 also decreases the synthesis of 1,25-dihydroxyvitamin D [1,25(OH)2D] in the renal proximal tubules. Both of these effects serve to lower serum phosphate levels. Hyperphosphatemia leads to an increase in the secretion of FGF23 by osteocytes while hypophosphatemia decreases FGF23 secretion. This explains why most cases of hypophosphatemia are associated with an increase in synthesis of 1,25(OH)2D unless they are FGF23 dependent.

Because complete surgical resection can cure TIO, localizing the tumour is critical. These tumours are often found in the craniofacial region or extremities. Thus, a careful physical examination should be focused in these areas. Conventional imaging with magnetic resonance imaging (MRI) or CT scans can be used to image areas of clinical suspicion. Some tumours associated with TIO express somatostatin receptors and can be detected using a radiolabeled somatostatin analog (octreotide scan)[3,13]. Other imaging techniques that have been used in locating these tumours include: whole body MRI, positron emission tomography, and selective venous sampling for FGF23 in a patient with a groin mass[14-16].

Historically, TIO-associated mesenchymal tumours were considered a heterogenous population. Recently, however, it has been suggested that roughly 90% represent phosphaturic mesenchymal tumours of mixed connective tissue type[17-19]. Other tumours, albeit much less common, associated with TIO include: hemangiopericytoma, sinonasal-type hemangiopericytoma, chondroblastoma, enchondroma, chondromyxoid fibroma[19,20]. Rarely, TIO has been reported with other tumour types, including carcinoma and hematolymphoid neoplasms[20].

Surgical treatment with wide excision of the primary lesion can result in a cure and attempts should, therefore, be made to localize and remove the tumour.

Medical treatment of TIO includes phosphate supplements (15 to 60 mg of elemental phosphate per kg per day in 4 to 5 divided doses) and calcitriol (15 to 60 ng/kg per day in one to two doses); prescribed with the aim of keeping phosphate and PTH in the lower normal range. Note that in the doses needed to heal bone, phosphate is often poorly tolerated and the most common side effect is diarrhea. Patients should be monitored for hypercalciuria and nephrocalcinosis. A potential adjunct to phosphate and calcitriol is induction of hypoparathyroidism with cinacalet - a calcium-sensing receptor agonist. This treatment is effective because the full phosphaturic effect of FGF23 is dependent on PTH[21].

In conclusion, our patient had a clinical picture consistent with TIO. He complained of chronic L hip pain and while he denied symptoms of weakness or fatigue he was using a cane for ambulation. The patient’s laboratory testing was consistent with tumour-induced osteomalacia. He had hypophosphatemia due to renal phosphate wasting (indicated by the persistently low levels of urinary phosphate reabsorption), a low serum 1,25(OH)2D, and an increase in serum FGF23. Other possible causes of renal phosphate wasting with elevated FGF23 levels include x-linked hypophosphatemia, autosomal dominant hypophosphatemia and autosomal recessive hypophosphatemia. Typically, these conditions present in childhood or adolescence and may be associated with a family history of hypophosphatemia. The fact that our patient was well until age 52 with no family history of bone disease or hypophosphatemia made these conditions unlikely. Total body octreotide scanning demonstrated nonspecific uptake in the sinus region consistent with sinusitis and a CT of the sinus confirmed a tumour in the left nasal sinus. The mass was biopsied and histopathology demonstrated a probable variant of sinonasal hemangiopericytoma-like tumour. The patient underwent surgical resection of this lesion and after surgery there was a resolution of laboratory abnormalities, clinical symptoms and a dramatic improvement in BMD. Our patient’s clinical course highlights both the difficulty in diagnosing TIO and the rapid clinical improvement when the tumour is removed.